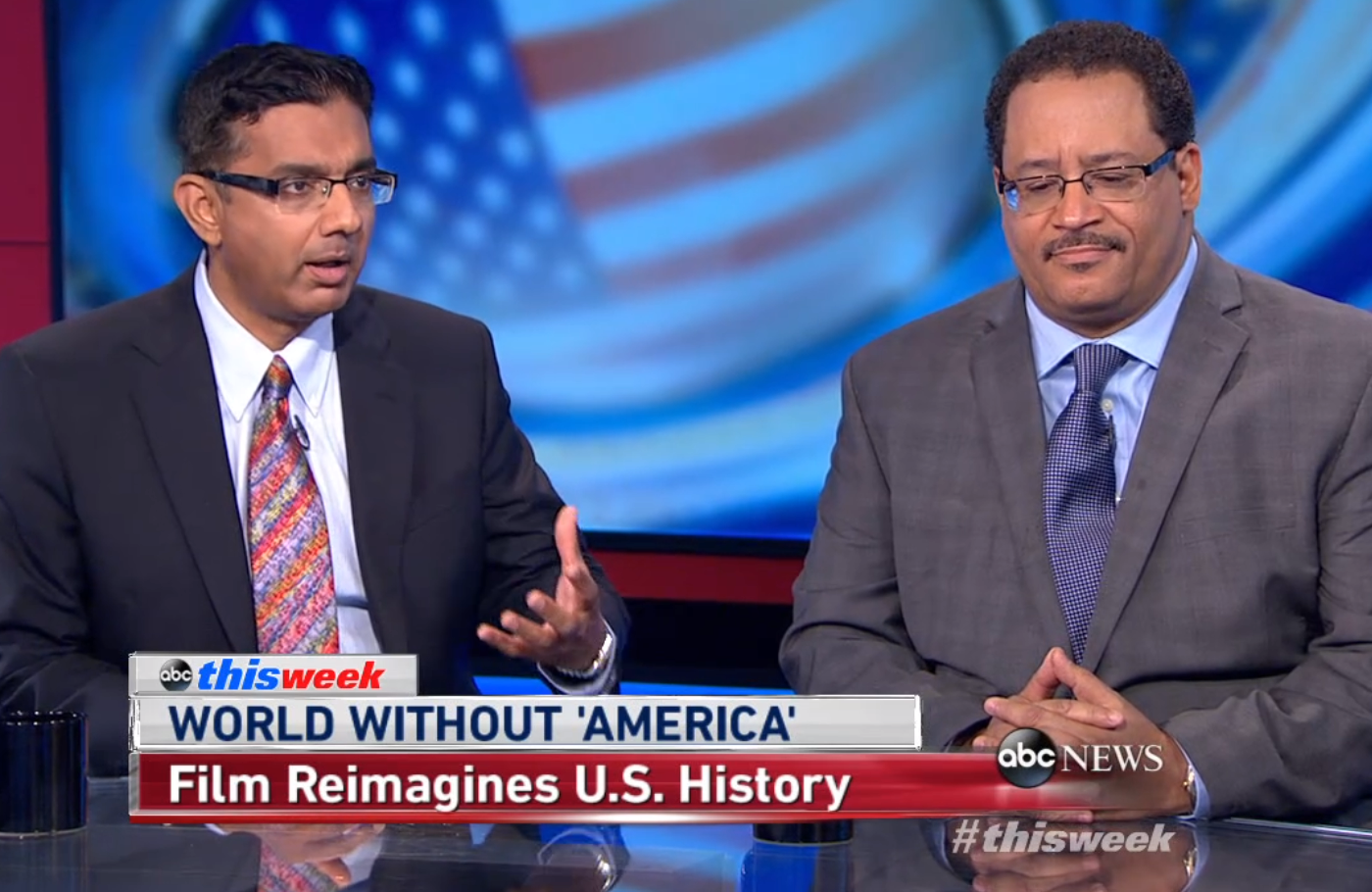 In yet another of the MSM’s misbegotten attempts at political “balance,” ABC News’s This Week with George Stephanopoulos lent right-wing conspiracy theorist Dinesh D’Souza a veneer of legitimacy to promote his latest “documentary,” America: Imagine the World Without Her. Guest host Martha Raddatz omitted mention of why else D’Souza has been in the news lately—he recently copped a plea to making illegal political contributions through straw donors, a felony for which he’ll be sentenced in September. But she did squeeze in an invaluable plug, saying, “It’s a very interesting movie. Everybody should go see it and continue a debate like this.” (Is it too conspiratorial to suggest that the omission and the plug were prerequisites for his appearing on the show?)

The debate was between D’Souza and MSNBC contributor Michael Eric Dyson, but giving a prestige platform for D’Souza’s latest wack-job theory (this time it’s a nefarious connection between Hillary Clinton and Barack Obama) is akin to giving climate deniers equal media time with climate scientists.

Dinesh D’Souza is the author and filmmaker who likes to cherry-pick coincidences from the past to explain present-day liberal politics—like his Newt Gingrich–endorsed theory that you can’t grasp “how Obama thinks” unless you understand his Kenyan father’s raging “anti-colonialism.”

To her credit, Raddatz introduced D’Souza’s recently released movie (currently number twelve at the box office) by saying, “[you] essentially have a conspiracy theory about Hillary Clinton and Barack Obama turning this nation into a socialistic nation, something you said started when Hillary Clinton was in college.”

And therefore… what? Hillary and Barack telepathically exchanged Alinsky vibes so they could turn the country red decades later? As Crooks and Liars points out, D’Souza didn’t mention that the right is now embracing Alinsky’s tactics or that in high school Hillary was also a Young Republican and a “Goldwater girl.” Nor are secret socialist sympathies evident in these two centrist Democrats. Hillary, knocked by left and right for only ambiguously owning up to her substantial wealth, is more of a Wall Street symp. A front-page New York Times story today starts: “As its relationship with Democrats hits a historic low, Wall Street sees a solution on the horizon: Hillary Rodham Clinton.” As for Obama, if only he followed Alinsky’s emphasis on confrontation a little more.

This is hardly the first time the corporate media has offered their stage to far-right media figures. A few years ago, CNN signed up (and has since waved adieu) RedState.com’s Erick Erickson and St. Louis Tea Party activist Dana Loesch as paid contributors. In April, ABC News brought on conservative radio host Laura Ingraham as a contributor; she’ll continue appearing on Fox News, where she subs for Bill O’Reilly. (Ingraham recently lit into the children being held in detention at the border for “complaining that the burritos and eggs they’re being given in their holding areas are making them sick…. I’ll bet there are American kids who would like free food before they go to bed at night.” Not that she’s for giving free food to hungry American kids, either.)

It’s not that Tea Party types shouldn’t appear on the networks’ signature Sunday shows; they should, they’re in the news. It’s just that when they do, they’re not grilled terribly hard. It’s as if mainstream media are as afraid of the far right as John Boehner is.

I wrote above that ABC helped legitimize D’Souza. Let me amend that: “gets” like D’Souza or Ingraham help legitimize ABC News with the Tea Party right. Sometimes seeking balance is really a plea to call off the dogs.