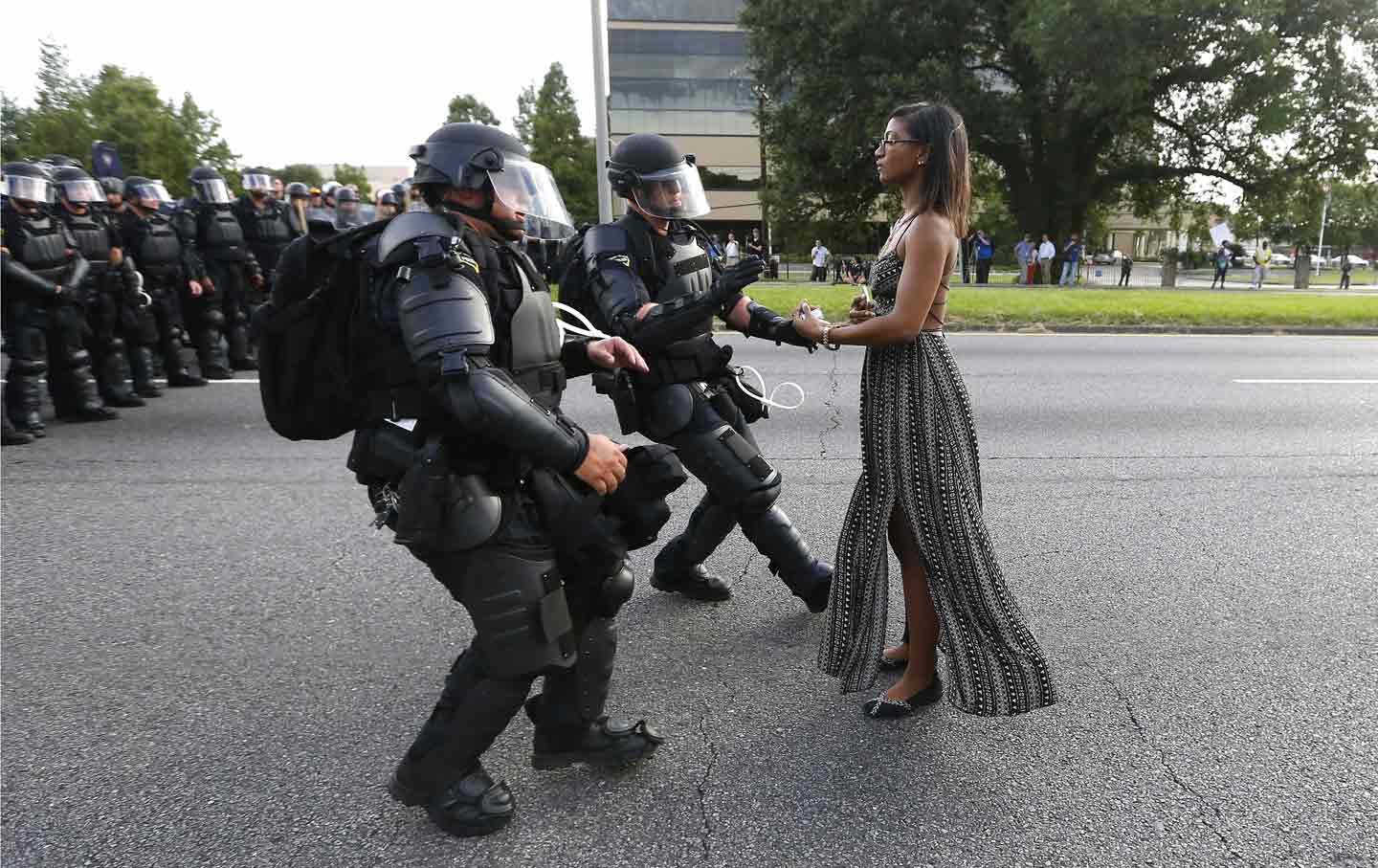 Protester Ieshia Evans is detained by police near the headquarters of the Baton Rouge Police Department, July 9, 2016. (Reuters / Jonathan Bachman)

The photograph of Ieshia Evans standing down the riot police in Baton Rouge, taken by Jonathan Bachman of Reuters on July 9, zipped around the world: an instant icon of that protean phenomenon known as Black Lives Matter. Teju Cole wrote an unsurprisingly terrific essay about it in The New York Times Magazine, associating it with other BLM photos, these with the recent spate of cinematic superhero imagery, and these in turn with images of the heroic individual as Tiananmen Square’s “Tank Man” and photographs from earlier civil-rights struggles. The series of transfers and associations is liquid and capacious.

There may be a closer association. This is with the small stained-glass window made by Nicola D’Ascenzo, the one in the Yale housing college named for 19th-century slavery advocate John C. Calhoun, that cafeteria worker Corey Menafee smashed with a broom handle three weeks earlier. The photograph and the window are in some sense opposite images. One depicts the awesome stillness of refusal: refusal of police power, refusal to accede to fear, refusal to die—a stillness and a refusal so intense it seems to throw the cops backward. The other depicts two black people, presumably slaves, bowing under the burden of cotton they’ve picked. It could be titled “Black Lives: Matter,” registering the ways that the bodies and the labor of slaves were the underlying matter on which United States capitalism was built. And so the images divide: black superpower, black subjugation.

But if these two instances are opposed, it is not through their symbolism. At stake is the opposition is between image making and image breaking, iconography and iconoclasm. One seizes upon the profound power of representation; one seeks to destroy that power. In this sense, the moments are opposed but entwined, a contradiction in which each completes the other—imperfectly, uneasily. The street and the workplace. The organized protest and the unforeseen swerve of a smoke break. The stillness of refusal, the sudden movement of negation: the broom handle finding its true purpose at last, an inspiration to all broom handles across the world. These form a whole, but one that cannot come to rest.

It should be easy to love both these moments. I do. It also feels important to be attentive to the way they are not only themselves but also a testimony to the contradictions of Black Lives Matter. It is these contradictions that make it such a social force. It is likely you will have noticed them, though they may appear as confusions, uncertainties. Is Black Lives Matter an organization, a social movement, an electoral scheme, a series of unpredictable eruptions, all, none of the above? Yes.

As a preliminary suggestion, one might say that there are two deep tendencies. The first wishes to act as a movement, and a relatively organized one: forming chapters, offering representatives, making proposals and even demands. This tendency has its own internal divisions, at least conceptually, between formations that pursue the most conventional politics (DeRay Mckesson running for mayor of Baltimore, for example, and the related Campaign Zero, with its program for police reform); and those looking to organize at a distance from the political machine (as in the hashtag’s originators Alicia Garza, Patrisse Cullors, and Opal Tometi, who envision a broadening and decentered network of radical chapters). Because these approaches are somewhat at odds, there is a risk that they might seem more or less to cover the spectrum of choices.

But this is not the case. The other tendency is harder to name, because its character is to resist forming the kinds of shapes—organizations, institutions, programs—we are good at naming. One might say it includes the people no longer able to believe that organizations, institutions, programs as we have known them are able to address (much less abolish) the very problems the Black Lives Matter arose to confront, from the ongoing murder of black people by cops and their surrogates, to racial hyperincarceration, to the entire system of race, immiseration, and exclusion integral to that knot of state and capital we call the USA. But the people who fought back after the police murder of Trayvon Martin, and more dramatically after Michael Brown and Freddie Gray; the ones who mask up and shoot back; who might at any moment smash the stained glass window on their work break; they are Black Lives Matter too.

Or maybe it makes more sense to think of Black Lives Matter as the contradiction itself, as the inability of these two tendencies to reach some stable resolution. BLM is volatile, in motion more than standing as a specific organization, and it cannot for the moment be harnessed. This, I suspect, is what makes it so powerful, so threatening, so charismatic in places both near and far. Were it one-sided, the powers that be would know which of their developed strategies for pacification to deploy. A negotiation would begin, or a brutal systematic repression, and something would have ended without much changing. Right now this is what is not happening, which is surely why this moment feels charged with possibility, even if it is only a sliver. It is more than usual. The entangled contradiction born by these two images, in its volatile persistence, is the condition of possibility for an ongoing struggle. And perhaps for the birth of others.