The Internet has taken the mystery out of mystery meat. If you want to know what’s inside a chicken nugget, all you have to do is search. When you do, you’ll find results like a study from The American Journal of Medicine in which nuggets were analyzed and found to contain less meat than fat, along with more blood vessels than you’d hope. Add to your search the name of your favorite fast-food outlet, and you’ll find McDonald’s Canada offering tours of a McNugget factory in response to a question about whether nuggets are made with pink slime (McDonald’s stopped using mechanically separated poultry in its nuggets in 2003).

Search further, and you’ll get the history behind the deep-fried food product. The nugget was invented by Robert Baker, a Cornell professor charged with figuring out what to do with New York’s oversupply of chicken in the 1950s and ’60s. The nuggets took off in the late ’70s when the USDA’s first dietary guidelines on meat pushed consumers away from red to white meat, and McDonald’s pulled them along with its mass manufacture and marketing of the McNugget.

But that’s not what you should be searching for. The real question is not where the nugget came from but why it is possible. How, to use Tony Weis’s term, is the world’s diet becoming so “meatified?” Again, the Internet has the answers, but you need to know what to ask. So before you search, some pointers:

Gallus gallus domesticus is the world’s most popular bird. The chicken we eat today is very different from those consumed a century ago. Birds that once took nearly four months to come to market and were sold weighing 2.5 pounds are now ready in 47 days and weigh 6.2 pounds. Those figures are from the National Chicken Council, the lobbying arm representing 95 percent of the broiler chickens produced in the United States. In the firmament of agricultural-lobbying giants, they’re Big Bird.

But, again, how? My colleague Jason W. Moore and I have traced a history of capitalism to seven cheap things: nature, work, care, food, money, energy, and lives. The modern chicken nugget shows how—in almost every case—the things that have made this breaded poultry confection are running out.

Work: There isn’t yet a chicken that can turn itself into a McNugget. You need workers to do that and, like many food -system workers, they’re among the most poorly paid employees in America. About half of the 30 jobs with the lowest median hourly wage in America are in the food system. Forevery dollar McDonald’s spends on McNuggets, workers get two cents. Some processing facilities use prison labor. One drug-rehab facility is facing a suit from the ACLU for sending its patients to chicken-processing plants in Oklahoma and Arkansas to work for free as “therapy.” For these wages, workers’ bodies suffer occupational illnesses at rates five times higher than those seen at regular jobs, seven times higher for carpal-tunnel syndrome, 10 times higher for repetitive-strain injury. This is perhaps unsurprising, when workers attend machines with nicknames like “fat suckers” and “neck breakers.” Yet rates of profit are unsatisfactory, and the industry is lobbying the US Department of Agriculture to increase the speed at which birds are sped down the production line, from 140 birds per minute to 175 birds per minute and, ultimately, to no speed limit at all.

Care: What happens to these workers’ bodies when they’re too broken to return to work? Disability and workers’-comp regulations might have provided some cushion for a lifetime of disability, but, as one ProPublica investigation found, those regulations have consistently been undermined, state by state, by firms like Tyson, one of America’s largest chicken processors. So who is it that does the care? In America, as globally, the majority of caregivers are women.

Food: Cheap care isn’t the only thing that is required to pick up the pieces after the exploitation of line work. The nugget is itself part of an arsenal of cheap food that allows low-wage workers and their families to eat, when supplemented with government assistance. The Overseas Development Institute observes a general trend that processed food is increasing in price far less than fresh fruit and vegetables. We’re moving to a world where only the wealthy can afford to eat five fresh fruits or vegetables a day.

Money: Cheap food is the corollary of not just cheap work, cheap care, and cheap nature but cheap money. The National Chicken Council is proud that “the industry today remains free of domestic subsidies.” But that’s true only of direct subsidies, cash given by the government directly to the chicken industry. Every step along the way, though, there are freebies. Cheap nature to reap and pollute, low wages, cheap food and care are all indirect subsidies. This is in addition, for instance, to the cheap feed that the birds get, a subsidy equivalent to $1.25 billion a year. But these businesses also depend on cheap money, cash offered at low interest rates. In order for KFC to exist in the United States, fast food needs low-interest loans and concessions. Franchises are considered small businesses and so are given loans of up to $2 million by the Small Business Administration.

Energy: Cheap energy is, of course, part of the story. Subsidies and tax breaks are what make it possible for nearly half the exploitation of oil in the United States to be profitable at $50 per barrel. In order for chickens not to die and freeze, you need access to propane, cheap fossil fuel to heat the barns. And, of course, the real planetary consequences of our fossil-fuel economy aren’t taken into consideration. 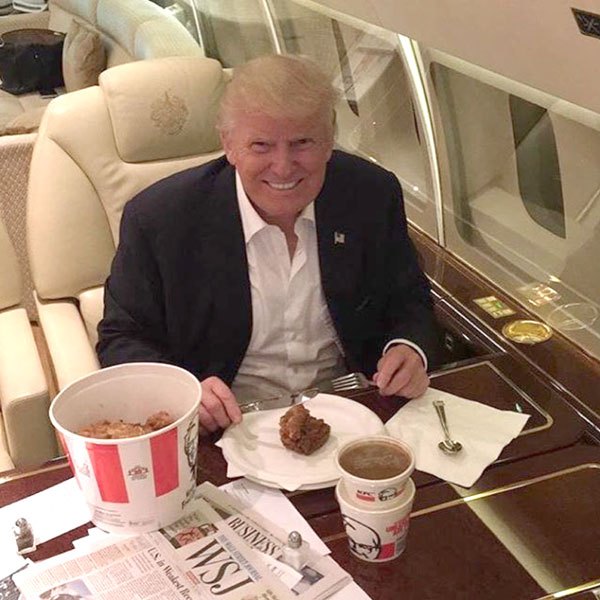 Lives: And perhaps the most pernicious part of this story of cheap things is that there are certain classes of people who are considered disposable. Look at who works in the US poultry industry: disproportionately women and the people of color on the production line. The disposability of certain bodies, the prevalence of white supremacy and patriarchy is a feature of the industry. Perhaps nothing captures our current state of affairs better than this picture of one awful orange product of patriarchy, chauvinism, and capitalism being eaten by another.

While this picture is bleak, social movements are building links across cheap things. Unions of food workers march for climate justice, farmers’ movements resist patriarchy, first nations win reparations and show what new relations to foodways might look like. Search, and you’ll find them. It’s no mystery that there’ll need to be a great deal of organizing necessary for change, but these movements offer a taste of what it might be to live in a world without industrial agriculture. And that, surely, is something to savor.