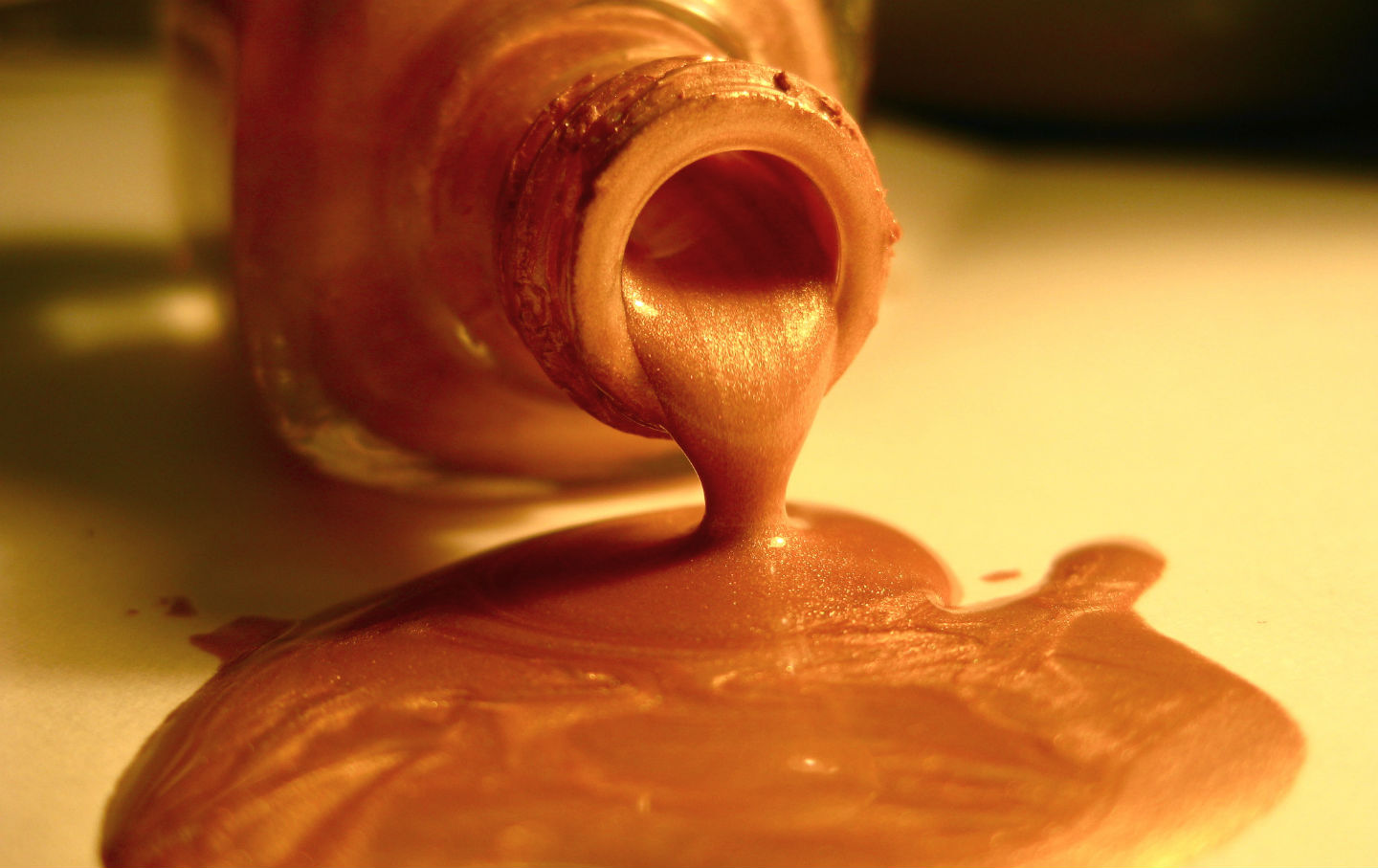 Under the searing lights of your local nail salon, looks really do kill. New York Times readers may have been stunned to learn last week that their glamorous fingertips may have imprinted their manicurist’s body with scarred windpipes and throbbing headaches. But the source of this toxicity has long hidden in plain sight beneath the veneer of the cosmetics industry.

Beauty product manufacturers pump poison onto the market every day, and among the first to absorb these chemicals are the women doing the most unglamorous work: The Times revealed that New York’s nail salon workers often spend 12 hours a day immersed in a chemical haze without protective masks or gloves. As part of a saloncare workforce of more than one million, their bodies form the frontlines of a scarcely regulated but heavily profitable global production chain.

For nail technicians especially (about 375,000 nationwide), the chronic health effects disproportionately hit women of color, a large portion of them Asian immigrants. Typically earning about $18,000 a year, many are undocumented workers stuck in coercive labor arrangements, sometimes virtual indentured servitude. That means no talking back when the boss insists that you work without a mask or fires you for fainting at work. They’re less likely to have access to decent healthcare, despite facing elevated chemical risks.

A study by Women’s Voices for the Earth outlines research on the potential health effects of salon work:

Research on nail salon workers in Boston and South Korea also point to an elevated risk of respiratory problems like nasal and throat irritation, and the chemicals involved in the job are known to harm reproductive health.

Health surveys of Vietnamese immigrant nail salon workers in California reveal how socioeconomic barriers intersect with health threats: Most of them were of childbearing age with limited English proficiency, and in interviews with researchers they discussed feeling tremendous stress on the job along with physical symptoms like “Allergies, nose, eye, and throat irritations, chronic pains, skin irritation, and coughing,” and ergonomic bodily strains. One worker talked about fear of incurring medical costs if they got sick: “I do not buy medicine or go to see the doctors unless it is really serious.”

Yet it’s hard to tell how serious your headaches are when everyone around you feels the same way. The workers were linked to a tight-knit immigrant community, rife with social and financial pressure that leaves many with little choice over their job.

According to research by The National Healthy Nail Salon Alliance, “The average nail technician is an Asian American woman in her reproductive years who works more than 40 hours per week over 9 years, earns $22,150 annually and does not have health insurance.” The sector’s heavy concentration of Vietnamese immigrants creates both cultural solidarity and economic insularity in the industry. The community has in many ways benefited from the mass-proliferation of Vietnamese-owned nail businesses and Vietnamese-speaking vocational trainers, which foster their entry into the salon industry workforce. But the success story is shadowed by an anemic, business-friendly regulatory infrastructure and paltry labor protections for the poorest workers, who toil silently amid chemicals they can’t identify and warning labels they can’t read.

On the shop level, oversight is sorely lacking, as labor regulatory agencies are deeply understaffed, and worker organizing in this marginalized sector remains embryonic.

But the greater danger may lurk higher up in the production chain. Currently the federal Food and Drug Administration generally requires no premarket safety approval of cosmetic products, so many potentially dangerous substances are presumed to be safe until proven otherwise. According to The National Asian Pacific American Women’s Forum, about 90 percent of the more than 10,000 chemicals in nail products “have not been evaluated for safety by any independent agency prior to marketing.”

For salon technicians, who face much more intense exposure than consumers, the environmental and reproductive justice implications are profound.

Workplace health and environmental regulations generally focus on limiting exposure to hazards. Now Governor Andrew Cuomo and the New York City Council are moving toward tightening regulations for workplace safety and labor standards. But some public health advocates warn that focusing too much on regulating retail workplaces and safety practices could let the products industry off the hook.

“OSHA regulations generally approach the problem as one of limiting exposure as opposed to removing the chemical to which workers are being exposed,” says Catherine Porter, a consultant with the California Healthy Nail Salons Collaborative, which campaigns for stronger chemicals regulation, “greener” salons, and workers’ rights.

Safer ventilation and protective equipment are crucial for workers. More comprehensive labeling is needed to help consumers make safer choices (federal law primarily regulates only whether products are wrongly labeled). However, Porter argues, “we think that these products should be made safer in the first place. We need to look upstream to the products themselves and stop putting all the onus on individual worker or consumer action.”

The US could follow European regulatory authorities by moving to preventively ban toxic cosmetic ingredients based on the “precautionary principle.” Occupational health and safety authorities can set stricter safety limits on chronic toxic exposures—for instance, by lowering the exposure threshold for the nail polish chemical toluene, to protect against nervous system damage.

Given what existing research tells us about chemical hazards women face at work, Porter adds, “We don’t believe that state or federal agencies or…legislatures should wait until we have body counts of how many people have died from cancer…before there is reform made.”

Luxury today is often measured by the distance between the worker and consumer experience—the invisibility of the field worker picking our strawberries or the obscured human face bent over our footbath. Consumers demand toxic-free toys for their kids, but seldom clean air or pesticide-free neighborhoods for those workers’ families.

But as we consume more and shrink the global commons, the imaginary divide between luxury and drudgery starts to fade, and the cost of collective ignorance becomes harder and harder to pass onto others.