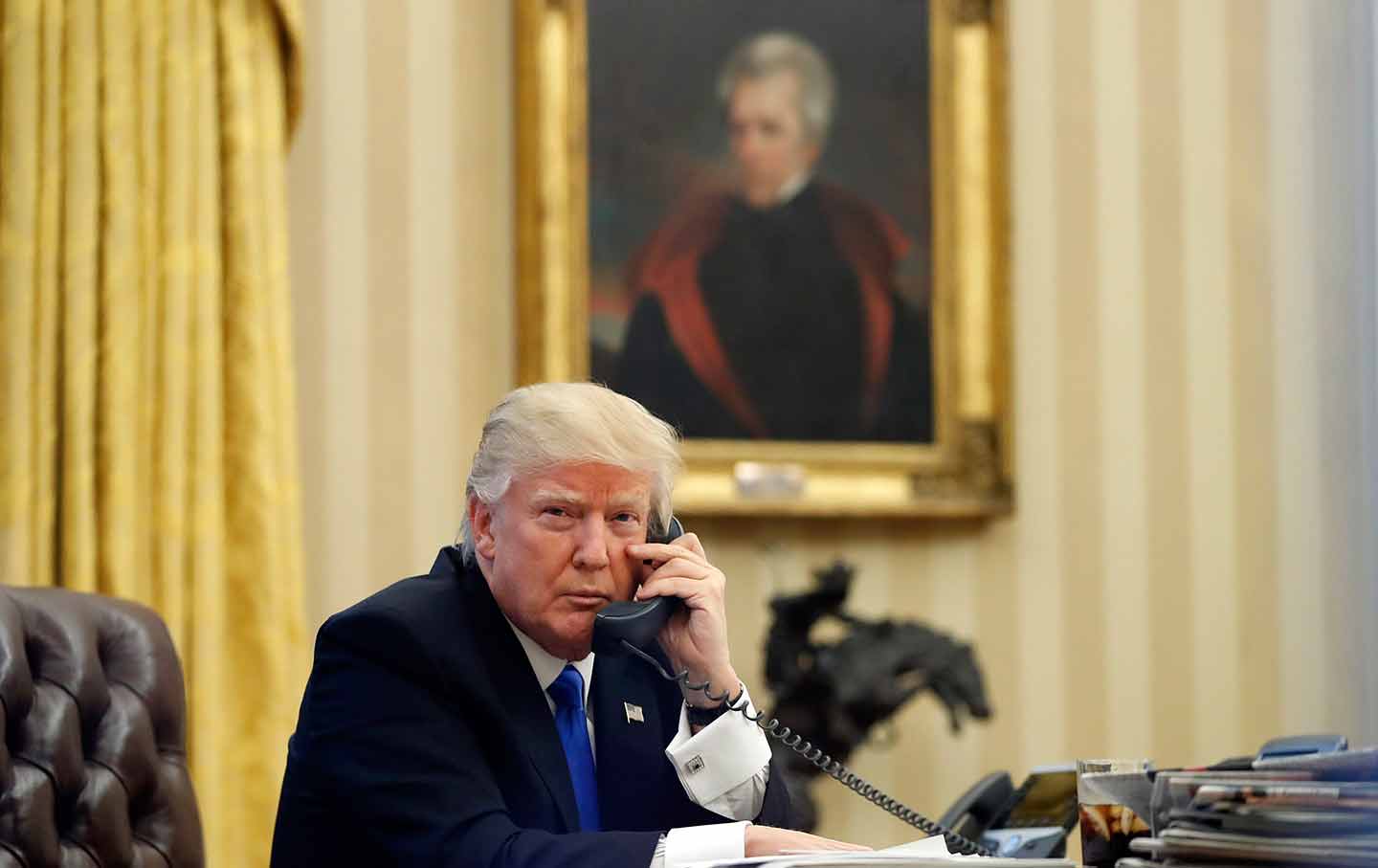 Is there some book where every wrong premise with regard to American history has been compiled? And, if so, how many copies does Donald Trump own? I ask this question with at least a measure of sincere interest, as it is impossible for those of us who have been paying attention to understand how anyone so deliberately and consistently ignorant could serve as the president of the United States.1

During the interview, Trump reflected on Andrew Jackson’s 1828 election, and his reputation as a “swashbuckler.” Let’s take the conversation up at that point:3

ZITO: That’s right. You were in Tennessee.4

TRUMP: I mean, had Andrew Jackson been a little later, you wouldn’t have had the Civil War. He was a very tough person, but he had a big heart. He was really angry that he saw what was happening with regard to the Civil War. He said, “There’s no reason for this.” People don’t realize, you know, the Civil War—if you think about it, why? People don’t ask that question, but why was there a Civil War? Why could that one not have been worked out?7

Let’s unpack those stunning statements by the president of the United States:8

1. Donald Trump has admitted that, despite his Steve Bannon-nurtured Jackson fetish, he’s had a hard time reading up on the seventh president. When Fox’s Tucker Carlson asked what he was reading in early March, the president replied, “Well, you know, I love to read. Actually, I’m looking at a book, I’m reading a book, I’m trying to get started. Every time I do about a half a page, I get a phone call that there’s some emergency, this or that. But we’re going to see the home of Andrew Jackson today in Tennessee and I’m reading a book on Andrew Jackson. I love to read. I don’t get to read very much, Tucker, because I’m working very hard on lots of different things, including getting costs down. The costs of our country are out of control. But we have a lot of great things happening, we have a lot of tremendous things happening.” So much for Jacksonian scholarship.9

2. Andrew Jackson was indeed a “very tough person.” But the “big heart” bit is a stretch. There’s a reason why millions of Americans were thrilled with the 2016 announcement that Harriet Tubman would bump Jackson from the front of the $20 bill. An article in Indian Country Today recognized the 250th anniversary of the seventh president’s birth with an article entitled “Indian-Killer Andrew Jackson Deserves Top Spot on List of Worst US Presidents” and recalled that: “In 1830, a year after he became president, Jackson signed a law that he had proposed—the Indian Removal Act—which legalized ethnic cleansing. Within seven years 46,000 indigenous people were removed from their homelands east of the Mississippi. Their removal gave 25 million acres of land ‘to white settlement and to slavery,’ according to PBS. The area was home to the Cherokee, Creek, Choctaw, Chickasaw, and Seminole nations. In the Trail of Tears alone, 4,000 Cherokee people died of cold, hunger, and disease on their way to the western lands.”10

3. Native Americans have every reason to disdain Jackson. But they are not alone. Describing Jackson as “a disaster of a human being on every possible level,” Vox’s Dylan Matthews correctly noted that, in addition to “Jackson’s role in American Indian removal—the forced, bloody transfer of tens of thousands of Native Americans from the South,” Jackson “owned hundreds of slaves, and in 1835 worked with his postmaster general to censor anti-slavery mailings from northern abolitionists” and that “Jackson’s small government fetishism and crank monetary policy views stunted the attempts of better leaders like John Quincy Adams to invest in American infrastructure, and led to the Panic of 1837, a financial crisis that touched off a recession lasting seven years.”11

4. Andrew Jackson was a slaveholder who stood on the wrong side of the fundamental moral issue of his times, and of the Civil War—human bondage. “In all reality, slavery was the source of Andrew Jackson’s wealth,” explains the website of the Hermitage, Jackson’s Tennessee home. “The Hermitage was a 1,000 acre, self-sustaining plantation that relied completely on the labor of enslaved African American men, women, and children…. When Andrew Jackson bought The Hermitage in 1804, he owned nine enslaved African Americans. Just 25 years later that number had swelled to over 100 through purchase and reproduction. At the time of his death in 1845, Jackson owned approximately 150 people who lived and worked on the property.”12

5. Jackson’s sins cannot be explained away “in the context of his times.” When Jackson got things wrong, others got them right. Andrew Jackson Foundation CEO Howard Kettell told USA Today that “We need to remember our history, and history is messy.” But John Quincy Adams, Jackson’s predecessor, opposed the expansion of slavery and objected to mistreatment of Native Americans, so it’s fair to say that Jackson made things messy. And he did so with populist appeals that divided people against one another, attacked the free press, disregarded sound economic and scientific ideas, undermined the courts, and diminished rather that strengthened democratic progress.13

6. The theory that “had Andrew Jackson been a little later, you wouldn’t have had the Civil War” is just wrong. Jackson’s presidency finished almost a quarter century before the Civil War began. Jackson died 16 years before the war began. And Jackson was no friend to the abolitionists who sought to address the crisis of slavery. He even opposed those who sought compromise, like Henry Clay—who challenged Jackson in the election of 1832. Clay also ran against Jackson’s protégé, President James K. Polk, a slaveholder widely condemned for seeking in the late 1840s to expand the influence of slaveholders and the amount of territory where slavery was allowed.14

7. Trump’s unsettling notion that the differences that led to the Civil War might “have been worked out” imagines what should be unimaginable: cutting deals with regard to slavery. The compromises of the pre-Civil War era did not prevent the war. Indeed, how can a nation that seeks to serve as a “city on a hill” example to the world compromise with those who would defend the practice of human bondage as economically or socially necessary? And what evidence is there that Andrew Jackson would have been a positive force in such negotiations? Jackson was a slaveholder who placed ads promising rewards for the return of a runaway “Mulatto Man Slave” that viciously promised “ten dollars extra, for every hundred lashes any person will give him, to the amount of three hundred.” Jackson argued that the Constitution had settled the slave debate, and he attacked the anti-slavery movement as a threat to public order. As the president, Jackson referred to religiously motivated abolitionists as “monsters” and he decried the anti-slavery movement as “the wicked design of demagogues.”15

When it comes to the divisions that led the United States toward the Civil War, there was a right side and there was a wrong side. Andrew Jackson repeatedly chose the wrong side. That Donald Trump does not know this—or does not choose to acknowledge this—is not just troublesome. It places him on the wrong side of history.16