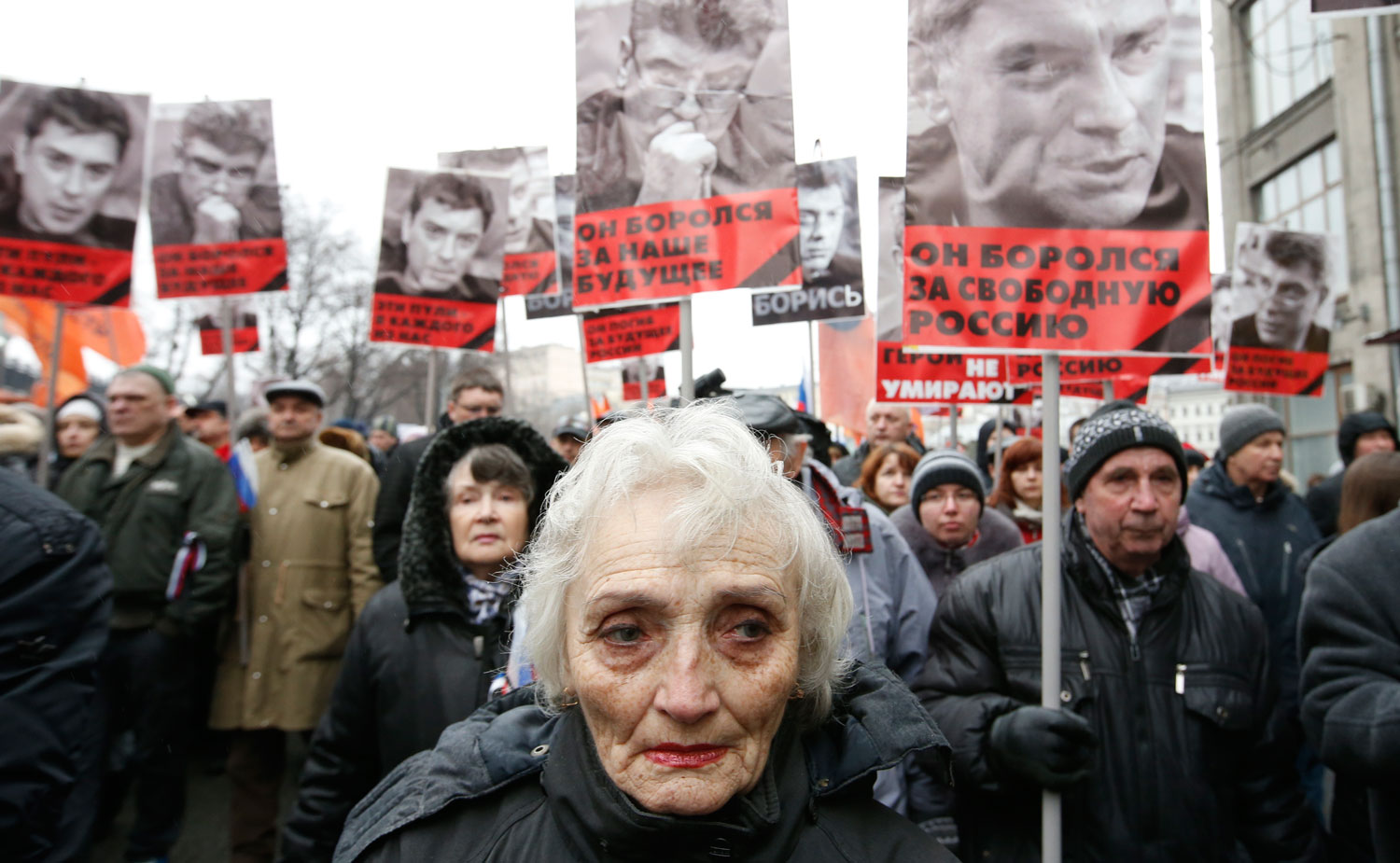 Tens of thousands of people marched Sunday in memory of former deputy prime minister and opposition leader Boris Nemtsov, who was killed by four bullets to the back Friday night just steps away from the Kremlin. The march seemed not just a farewell to the well-known politician, but also to the Moscow street opposition movement, which had stagnated after the Bolotnaya trials against protestors and the rise of war-time patriotism over Russia's role in the Ukraine crisis.

Independent monitor Golos said 50,000 people came to the march, which slowly wound through downtown Moscow to the place where Nemtsov was killed, marked by piles of flowers. The capital had not seen a march this large since 2012, when more than two dozen people were hit with criminal charges after clashes with police on Bolatnaya Square on the eve of Vladimir Putin's inauguration. But it wasn't an opposition protest like those that unnerved the Kremlin in 2011 and 2012, and it did not seem to be the start of a similar surge in street actions.

Instead of anger at the Kremlin and chants of “Russia without Putin,” the procession was mostly quiet, with more marchers carrying two roses—a sign of mourning—than banners and placards. Many carried Russian flags with black ribbons handed out and collected at the end by oligarch and Putin foe Mikhail Khodorkovsky's Open Russia organization. Of those placards that were to be seen, most read simply “I am Boris Nemtsov,” “I have no words,” or “Propaganda kills.”

The Russian opposition has widely blamed the killing on state-controlled media's frequent suggestions that Kremlin critics are working to undermine the country, assertions helped along by Putin's own reference to the thin line between opposition and a “fifth column.” This “machine of hatred,” opposition duma deputy Dmitry Gudkov told me, had likely inspired whoever carried out the killing. Even lawyer Genri Reznik, president of the Moscow bar, tied Nemtsov's death to the hateful rhetoric of Russia's state channels during a debate with parliamentarians on Channel One.

Well-known economist Pyotr Lanskov echoed the thoughts of many marchers when he told The Nation Putin is to blame: “It's not important if he gave the order, he created the atmosphere.”

“If you can kill a well-known person with impunity, because I'm sure no one who ordered it will be punished, then we're all just as vulnerable,” Lanskov said. “I go to all these actions and work as an electoral observer, so what now? Someone can kill me too?”

In a survey on GlobalVoices, three prominent patriotic bloggers rejected the theory that a patriotically minded loose cannon killed Nemtsov, instead accusing the opposition of hypocrisy and using the murder for political ends. All three brought up opposition leader Alexei Navalny's comment, yelled at a demonstration for fair elections, that “I'm an Internet hamster and I'll chew through the throats of those swine!” as an example that in fact it was the opposition inciting hatred.

But few can deny that reactionary speech seems to be gaining steam in Russia today. An “anti-maidan” movement has appeared to pester participants in anti-war actions in Moscow, and a pro-Kremlin rally on the anniversary of Ukrainian president Viktor Yanukovych's ouster last weekend drew thousands carrying signs such as “We don't need Western ideology and gay parades” and, in a reference to Down syndrome, “We're not maidan-tards!”

While last weekend's rally was pro-Kremlin, other far-right groups oppose the Kremlin. A few nationalist groups with Russian imperial tricolors were even present at the march for Nemtsov, a pro-Western liberal anathema to most of their beliefs. Half a dozen activists from the Russian Ethnopolitical Alliance said they respected Nemtsov's outspoken denunciations of the Kremlin.

“We grieve for him as an opposition politician, even though when he was in power he did lots of incorrect things, like when he helped [then-president Boris] Yeltsin pass national assets to oligarchs,” said one who would identify himself only as Slava. Many have accused Nemtsov of helping transfer state assets into the hands of a few well-connected individuals through his privatization programs, creating a class of fabulously rich oligarchs.

“I think this was a provocation by the west,” Slava said when asked who was to blame for the murder.

A small column of left-wing activists marched with signs against all forms of imperialism. But many participants were less overtly political. Former defense factory worker Sergei Ryzhov said this was the first political event he had been to since 1993.

Although prominent activist Leonid Volkov said the march was “a chance to get united again,” few others thought this would lead to a new wave of protests by Moscow's liberals.

“People usually unify around a leader, but now there is no leader,” said Vyacheslav Buralnik, who was previously an organizer with Nemtsov's Union of Right Forces party. Navalny, the most popular street opposition leader, has spent most of the past year-and-a-half under house arrest, and prominent comrades like Ilya Ponomarev and Garry Kasparov have fled abroad. Far-left leader Sergei Udaltsov has been imprisoned on charges of organizing mass riots.

But several said they thought unrest would grow due to the difficult economic situation caused by low oil prices and Western sanctions. Some analysts predict that inflation of food prices will reach 30-35 percent by the end of the year.

“In the future, the activity won't be from us but rather from the hungry population,” said psychologist Alexander Venger. “I think there will be political changes, but not in the direction we want.”

“This is the start of more bleak [political] activity,” Lanskov said. “The economy is getting bad. Soon even the stupid will understand that this is the fault of Putin’s regime.”