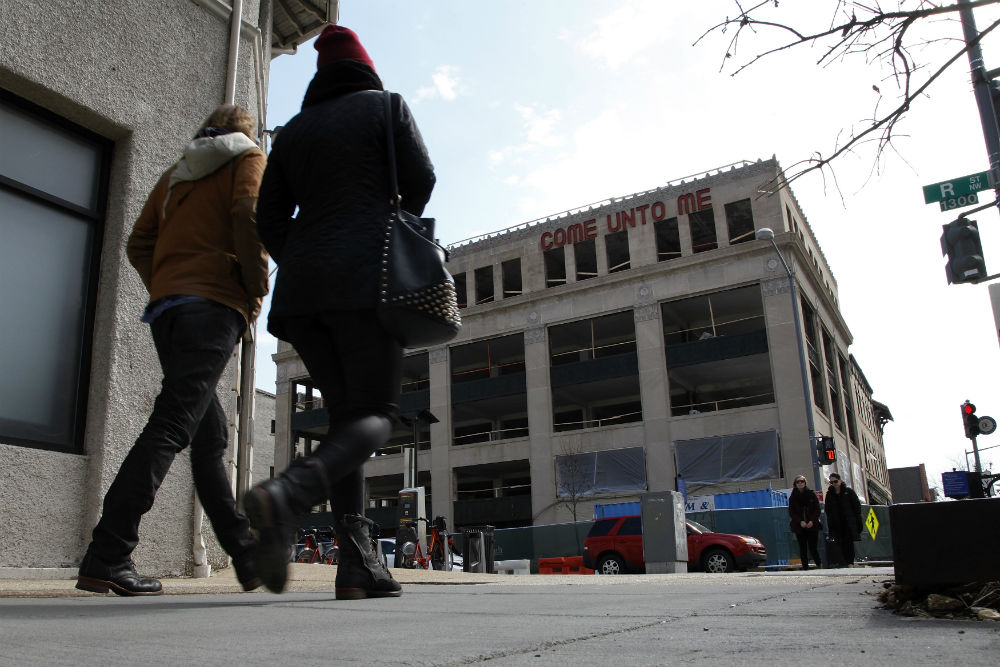 The “Come Unto Me” sign on a former homeless shelter remains, even as it is being gutted to be redeveloped as retail and upscale living space, in Washington March 1, 2014. (Reuters/Jonathan Ernst)

The bodies of two homeless men were found Wednesday morning in Washington, DC, just a short drive away from the heart of the nation’s government.

City police said the likely cause of death was hypothermia, although a medical examiner has yet to determine an official cause. The bodies were discovered in a makeshift encampment about fifty feet from each other. After days of warm weather, DC was hit with a cold front Tuesday night, bringing snowfall and causing the city to issue a hypothermia alert.

“These deaths were entirely preventable, as are deaths by exposure and hypothermia that have been happening across the country,” said Jerry Jones, executive director of the National Coalition for the Homeless. “It’s what happens when you don’t spend money on affordable housing and you have people living outdoors with the elements. This is the cost of not spending money on basic necessities.”

Yesterday’s tragedy comes off the heels of a “catastrophic” homeless crisis during this year’s brutal winter. A record number of DC families sought emergency shelter this year, maxing out the city’s available spots and forcing officials to place people in hotels and even recreation centers outfitted with cots. Advocates for the homeless say the surge of homeless families points to the need for longer-term solutions, such as rent subsidies and more affordable housing options.

“It’s twenty-eight years to get a one bedroom apartment in DC. There are no subsidized units available for most families and the rental market is pricing people out pretty rapidly,” Jones told The Nation.

DC, along with New York and Los Angeles, saw rising homelessness in recent years, bucking a national trend. The homeless population in DC rose more than 1,000 over the last six years, a 29 percent increase, according to the US Department of Housing and Urban Development. New York saw a 23 percent increase during the same time frame.