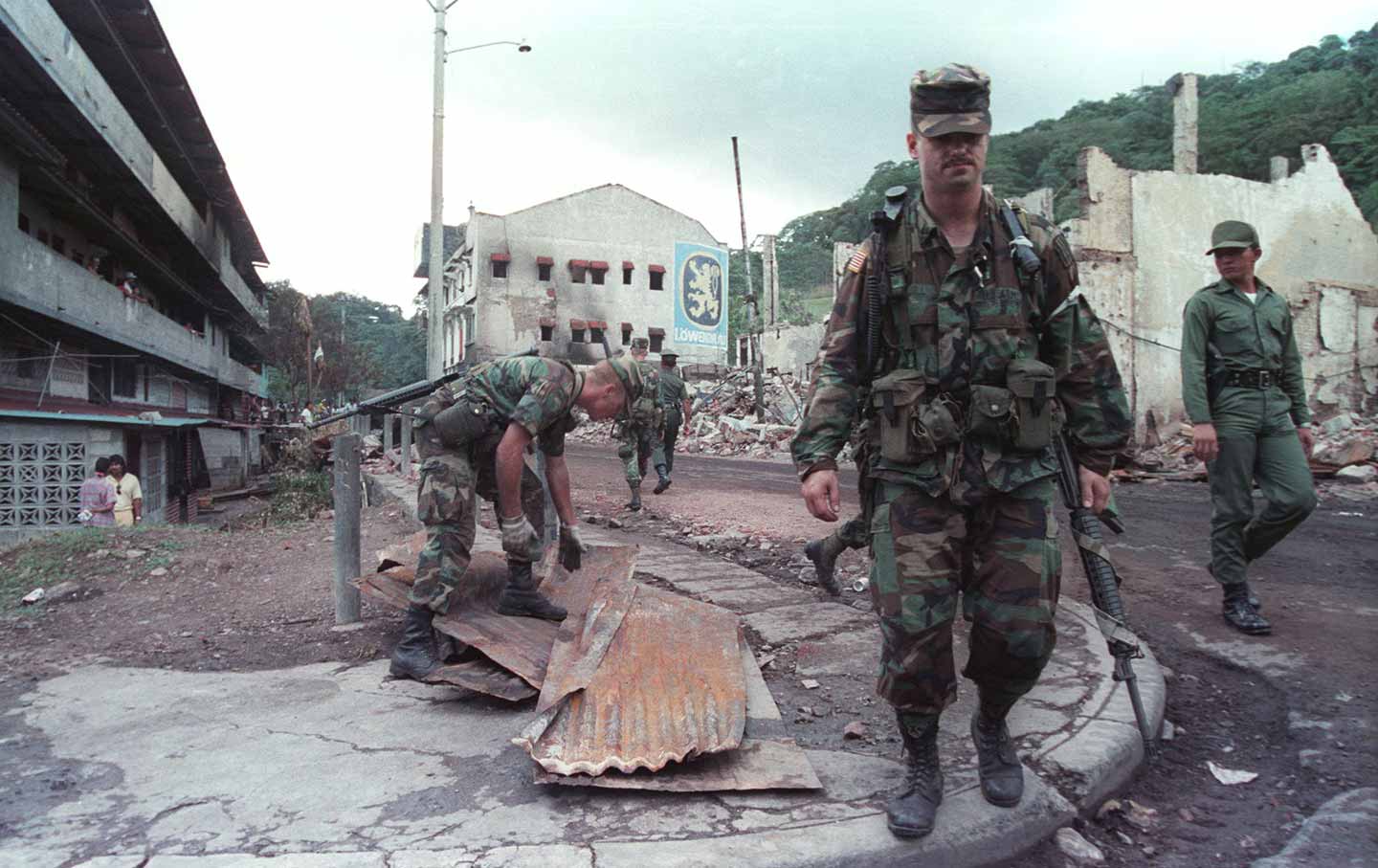 US and Panamanian soldiers patrol Panama City’s Chorrillo district, which was destroyed in the 1989 US invasion. (Reuters / Corinne Dufka)

Manuel Noriega is dead at 83. He seems like a sad footnote to the last disastrous quarter century, but the December 1989 US invasion of Panama really was a permission slip for Washington—led by both Republicans and Democrats—to waste whatever potential benefits the end of the Cold War might have brought. Remember the “peace dividend”? The Berlin Wall had just fallen on November 9, and George H.W. Bush, the “realist,” was quick to use Panama to leverage the collapse of Soviet rule in Eastern Europe, declaring the end of “sovereignty” and the right of the United States to invade other countries in the name of “democracy” and “human rights.”

“Today we are…living in historic times,” Bush’s ambassador to the OAS, Luigi Einaudi, lectured, two days after the invasion, “a time when a great principle is spreading across the world like wildfire. That principle, as we all know, is the revolutionary idea that people, not governments, are sovereign.” From Panama, it was a fast slide into Iraq, both wars I and II.

I wrote about the Panama invasion as a prelude to Iraq for Tomdispatch two years ago, here. Here are some of the takeaways, about the war and its consequences:

According to James Mann in his history of Bush’s war cabinet, Operation Just Cause helped to “overcome resistance within the Pentagon itself to the use of force,” thus serving as a warm-up act to the first Gulf War, illustrating how “realism” and “idealism” aren’t opposing values in US diplomacy, but rather feed off each other, creating a self-propelling cycle of justification for militarism. It brought together the so-called neocons, like Dick Cheney, and the supposed “realists,” like Colin Powell. As GHWB’s chairman of the Joint Chiefs of Staff in 1989, Powell was hot for getting Noriega. In discussions leading up to the invasion, he advocated forcefully for military action. Powell, despite coming to be associated with the need to have an “exit strategy” for military actions, let the capture of Noriega go to his head. It was he who pushed for a more exalted name to brand the war with, one that undermined the very idea of those “limits” he was theoretically trying to establish. Following Pentagon practice, the operational plan to capture Noriega was to go by the meaningless name of “Blue Spoon.” That, Powell wrote in My American Journey, was “hardly a rousing call to arms.… [So] we kicked around a number of ideas and finally settled on…Just Cause. Along with the inspirational ring, I liked something else about it. Even our severest critics would have to utter ‘Just Cause’ while denouncing us.”

Since the pursuit of justice is infinite, it’s hard to see what your exit strategy is once you claim it as your “cause.”