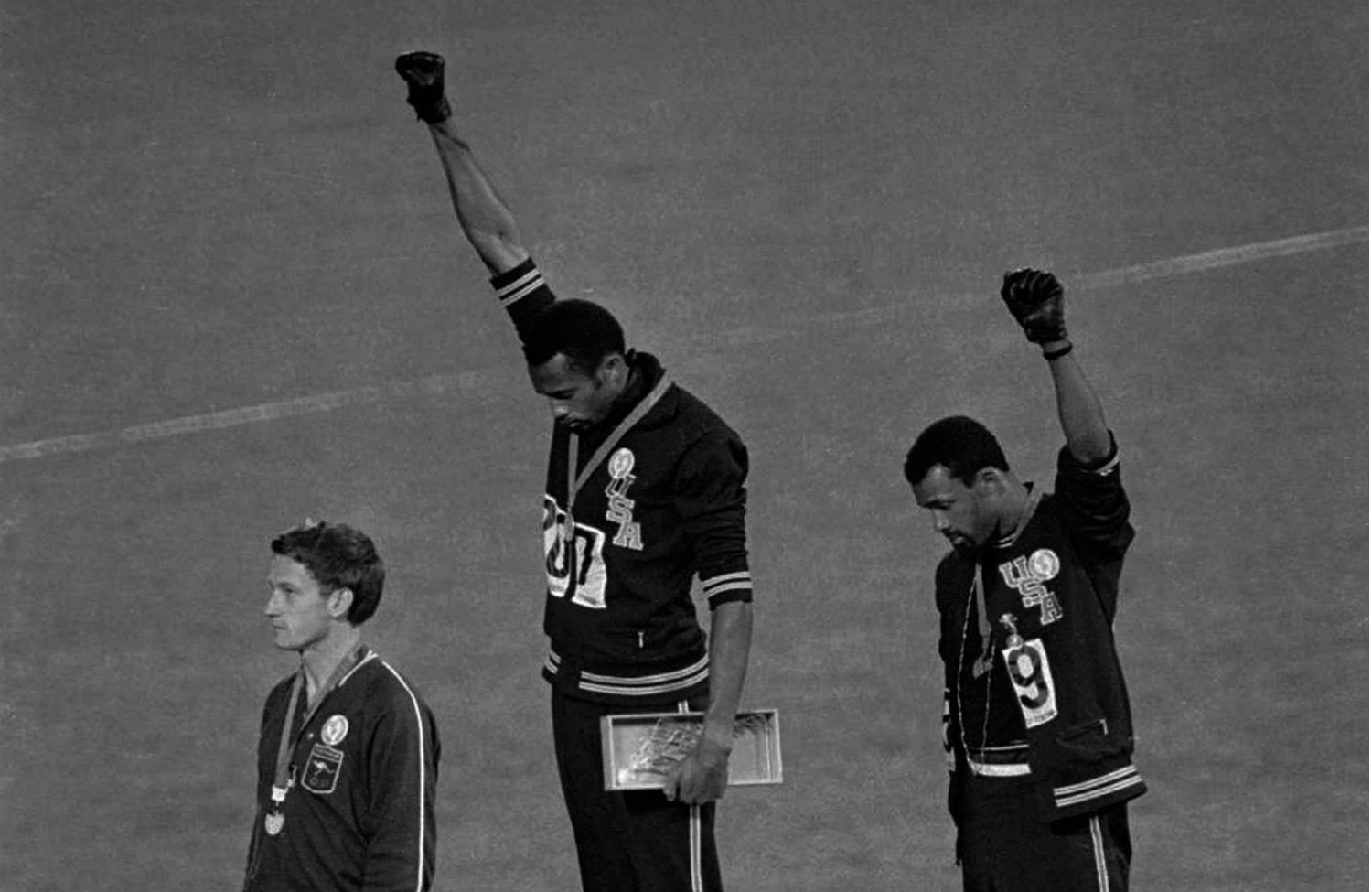 John Carlos (right), along with Peter Norman (left) and Tommie Smith, during their famous protest at the 1968 Olympics in Mexico City (AP Photo/File)

As NBA players are making symbolic political statements on the court in response to Donald Sterling’s recorded racist rant, 1968 Olympian John Carlos’s name has been repeatedly referenced in columns and on social media. After all, it was the stand of John Carlos and Tommie Smith after their 200-meter race at the Mexico City Olympics that has become the go-to template for athletic protest over the last forty-five years. Many are using Carlos’s example to state authoritatively what the Clippers players should or should not have done before their playoff game last Sunday. Some folks are saying that if John Carlos were on the Clippers, they would have boycotted the game. Others have said that if John Carlos were there they would have sat on the floor or walked off the court after the opening tip. People have been talking about John Carlos as if it were a doctrinal “what would Jesus do?” kind of discussion. This was coupled with a series of moralistic articles—including this doozy from The New York Times—about all that the players should have done.

Meanwhile, here is John Carlos, 68 years young, living in Georgia, and it seemed like no one was actually asking him what he thinks. I called Dr. Carlos and, sure enough, he told me I was the first person to seek out this thoughts about Donald Sterling, the symbolic stand of the Clippers and even more

Like so many of us, he sounded weary at yet another instance of what Kareem Abdul Jabbar called “the latest in a long line of rich white celebrities to come out of the racist closet.”

“It’s just terrible we still have a situation like this, a world like this,” Carlos said. “It sheds light on where we are.”

With so many people comparing—negatively—the Clippers warm-up protest to his own radical stance in 1968, it might surprise people to know that he was impressed by their actions. “I think they made a statement that showed they couldn’t walk away and do nothing. They made their statement. They could only do so much because they had to come together collectively. Tommie [Smith] and I only had to agree with each other. They had to get twelve people on the same page and show that they as a team were going to act as one. That’s not easy and they should be commended for making their dissatisfaction clear.”

But, for John Carlos, what happens next is far more important than any symbolic protest. He called for a series of very specific actions by fans, players and the other NBA owners. “I don’t know how if you are a fan of this Clippers team, you can show up to these games and put money in this man’s pockets. He said he does not want you there if you look like me or my family. But a boycott is not just for fans who are black. It is all fans of conscience: black, brown and white. I know people are going to say, ‘You’re going there to support the players, not Sterling.’ But you have to know you are putting money in his pocket.”

As for the players on that team, Dr. Carlos said that they should say publicly, “We are going for it. We are going to try and win this championship. But whether we win or lose, we are going to be in that man’s office the day after the season ends and demand a trade. Every single one of us.”

Then there are the owners and Commissioner Adam Silver. “The new commissioner has sounded lawyerly and tentative. But let’s see if he moves decisively. I hope they have a clause where they can demand that he sell his team. You think about [former Cincinnati Reds owner] Marge Schott. The other baseball owners forced her out and that was some years ago. The deal is this. The NBA has to say there is no place for Donald Sterling. Short of that, they are sending the wrong message.”

John Carlos had one last thought that he wanted me to share as well. “Why aren’t people making a bigger deal about this man’s womanizing and the way he treats women? Look how Tiger Woods was treated [by the media] and look at Donald Sterling. He is getting a pass on that part of this, and I don’t like it.”

So to sum up, Dr. Carlos thinks the fans should boycott, the players should demand trades and the owners should take Sterling’s team. I think we perhaps can see why a lot of mainstream outlets have not asked for his thoughts. But these are certainly ideas that many people both inside and outside the NBA share.