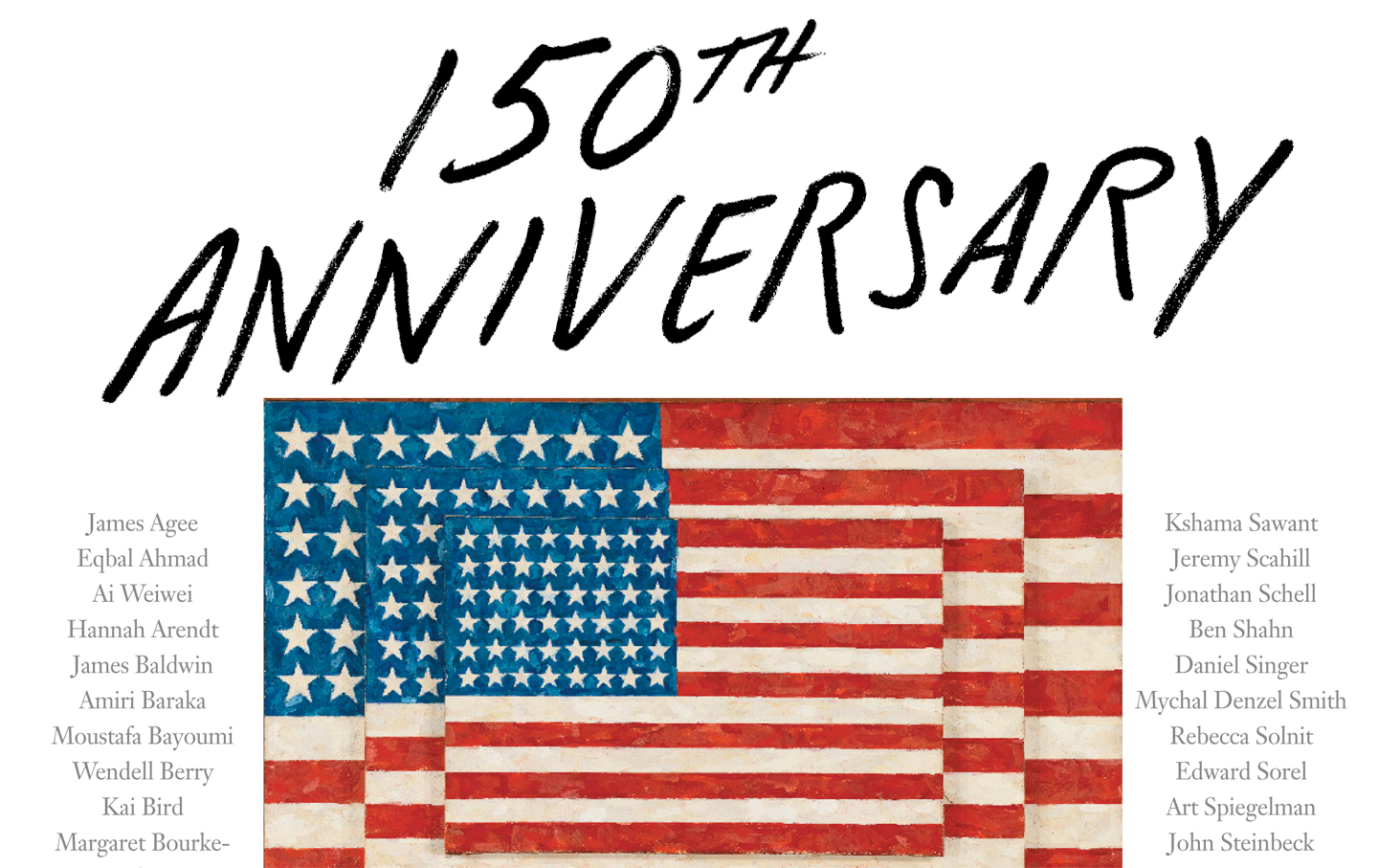 Freda Kirchwey, the first woman editor of The Nation, said, “Anniversaries should be approached without awe.” That was seventy-five years ago. The Nation’s longevity over 150 years is a remarkable feat—especially in our fast-changing media landscape.

For the magazine to survive and thrive for another century and a half, however, The Nation will have to adapt. Indeed, sixty years ago, Kirchwey’s successor Carey McWilliams declared: “The Nation must change, as it has changed in the past, if only to encompass certain harsh realities of present-day American journalism.” The Nation, he added, has a “special responsibility to report the significant happening that might otherwise go unreported, to air unpopular views and controversial issues.” When every day seems to bring the demise of another iconic voice, and the news is increasingly dominated by sound bites and gossip, The Nation’s commitment to covering the issues that matter, giving space to unconventional news and views, takes on even greater urgency.

This special issue, which I have co-edited with my valued colleague D.D. Guttenplan, our London correspondent, weaves together voices from The Nation’s rich history with contributors writing about the current cultural and political moment. In three sections of archival excerpts, each representing five decades of the magazine’s history, we reprint some of the best that was thought and said in our pages—much of it inspiring and eerily prescient, some of it shocking, but all of it fascinating to read. We have also included a few selections that turned out to be less than prophetic. As we look toward the future, the mistakes of our past remind us that taking a principled stand often requires running intellectual risks.

Interspersed with the archival excerpts are three sections of newly commissioned material. In the first, “The Nation and the Nation,” writers explore the magazine’s surprising influence on everything from poetry to feminism, radicalism to right-wing conservatism, Cuba to coverage of the arts. In “Fierce Urgencies,” contributors consider topics as pressing today as at any time in the last 150 years, including the politics of fear, from anticommunism in the 1950s to Islamophobia today, and the relationship of the left to power—in movements, in electoral politics and in government. Finally, in “Radical Futures,” Nation writers map out new ideas and strategies for radicals, progressives and liberals seeking to expand the terms of our public discussion and look beyond the present moment. Throughout these sections, we republish a selection of the most dazzling poetry and art that has appeared in our pages, as well as newly commissioned work by some of the most exciting artists working today.

Reading through the issue, I was struck by the many continuing conversations among Nation contributors, the deep correspondences between past and present ideas about what it would mean to imagine a radically better future. But then The Nation’s founding prospectus, 150 years ago, called for “a more equal distribution of the fruits of progress and civilization.” That still seems like a good idea.

This momentous anniversary will also be marked by Guttenplan’s spirited new book, The Nation: A Biography. Excerpts here lend historical context to the issue, and selections from the transcript of a recent Nation-sponsored conversation at the Schomburg Center for Research in Black Culture point the way toward a revival of the abolitionist project that launched this magazine, exploring what it might mean to actually finish the work of Reconstruction.

This year also marks my twentieth anniversary as editor of The Nation. I came to the magazine as an intern at the outset of the Reagan years, following in the footsteps of remarkable editors like Carey McWilliams, Victor Navasky and, of course, Freda Kirchwey—an early feminist, a fiercely principled and early opponent of fascism, a determined foe of McCarthyism and an inspiration to me—who led the magazine from 1937 to 1955. My two decades as editor have coincided with turbulent times, both for The Nation and the nation: from the Clinton impeachment to the Supreme Court’s selection of George W. Bush in 2000; from September 11 and the invasion of Iraq to the revelations of torture and abuse at Abu Ghraib and elsewhere. Then there was Hurricane Katrina, America’s worst financial crisis since the Great Depression and, today, the risk of a new Cold War with Russia.

One of my most important responsibilities has been guiding The Nation through periods of strife, from the grim days after 9/11 to our early and unwavering opposition to the Iraq War. Criticizing government policy in wartime is not a path to popularity. But I drew on the strength of my predecessors, who were also willing to take unpopular stances, animated by The Nation’s enduring principles. There have been electrifying moments, too: the election of Barack Obama, the first black president in our history; and the proliferation of social movements at home and abroad, including Occupy Wall Street and #BlackLivesMatter. I have never—yet—experienced a week like the one described in the very first line of The Nation’s first issue: “The week has been singularly barren of exciting events.”

Instead, the decades have only increased my respect for this extraordinary institution and the debates, both civil and uncivil, that fill its pages—and now its web pages. Our columnists and contributors argue and debate among themselves on matters of principle, politics, policy and even morality.

Through it all, I have my own passions and fixed points on my political compass. These include an abiding belief in inside/outside politics—that against entrenched injustice, it takes a movement of courageous citizens sick and tired of being sick and tired, but also principled political leaders with the will and the skill to push change through a system designed to impede it. They also include the conviction that only an organized people can avert the theft of our country by oligarchical money and dismantle the rigged system that cheats too many working and poor people; that democracy without women is not democracy; and that we’d be wise to get our own house in order before remaking the globe. And while we’re at it, isn’t it high time to craft a politics of hope, not of fear? Of true security, not perpetual war?

Above all, I see myself as the steward of an idea that has sustained The Nation since its founding: the idea that there are always alternatives—in history, in politics, in life—that would make our country and the world a more humane, just and secure place.

Take racial justice—a commitment that formed part of The Nation’s founding purpose in 1865. In this issue, you can read James Baldwin’s eloquent, outraged report from what in 1966 he called “occupied territory”—meaning not the Middle East, but Harlem. His essay has particular echoes in our own time, but these same parallels are apparent in our coverage of feminism, of corporate power, of anti-imperialism and many other topics. Throughout its history, The Nation has challenged the conventional wisdom and narrow consensus of our public debate. We have repeatedly championed proposals originally labeled heretical, only to see them accepted as common sense a generation later. For instance, The Nation argued that reaching a negotiated solution in Vietnam was a better strategy than military intervention—in 1954!

That independence has been one of the keys to The Nation’s longevity—and has become ever more important in an age when the need for dissident and rebellious voices is ever more urgent. Our commitment to providing a venue for passionate arguments between liberals and radicals has instilled in both a deep sense of ownership in The Nation—and a stake in its continued survival. Finally, The Nation’s readiness to fight and refight the same battles—a persistence that permeates every page of this issue—has inspired a rare and precious devotion among our readers. As the great Carey McWilliams once said, “It is precisely because The Nation’s backers cared more about what it stood for than what it earned that the magazine has survived.”

Yet, while I am delighted to honor the magazine’s illustrious history, I am determined to bring The Nation into the twenty-first century. I have worked to promote younger writers, appeal to young readers, and engage with the issues and social movements that inspire the passions of young people. Our country and the world are undergoing extraordinary tectonic shifts. When it comes to citizen control of government or corporate power, we’re in the fight of our lives. These times demand that The Nation be ever bolder, willing to unshackle our imaginations and ready to think anew. The advent of digital publishing and social media offers a historic opportunity to reach vastly larger audiences and have a greater impact in the world.

But it also represents a challenge. Storytelling and opinion are no longer confined to the orderly columns of print: videos, infographics, photo essays and real-time reporting are now all common journalistic tools. At The Nation, we’re committing to embracing this change. One measure of our commitment: acclaimed director Barbara Kopple’s rollicking documentary Hot Type: 150 Years of The Nation will be a key part of our anniversary celebrations around the country.

On July 6, 2015—exactly 150 years from the debut of The Nation’s first issue—we’ll launch a new website, redesigned from top to bottom. The reimagined TheNation.com is elegant, nimble and innovative, and I believe it will ensure that The Nation is more vital than ever for the next generation of readers. At the same time, print remains an anchor, an essential part of The Nation’s identity. As breaking news continues to migrate online, the print edition retains a distinct mission, offering considered comment and a more curated opportunity to focus our readers’ attention on matters of critical interest.

Change is inevitable, but the one constant in The Nation’s history has been faith—not in political parties or policies, but in what can happen when you tell people the truth. Our very first issue described “the conflict of the ages, the great strife between the few and the many, between privilege and equality, between law and power, between opinion and the sword.” This anniversary issue is a record of the last 150 years of that conflict—and as long as The Nation is around, that fight will go on.