A crowd at the Midwest segment of the Poor People’s Campaign in Columbus, Ohio, on May 13, 1968. (AP Photo)

When profit motives “are considered more important than people,” Dr. Martin Luther King Jr. once declared, it’s time for the nation to “undergo a radical revolution of values.”

To bring about that revolution, King and other leaders announced plans in December 1967 for a Poor People’s Campaign that would mobilize disadvantaged people across racial and geographic lines. Four months later, an assassin’s bullet prevented the campaign from reaching its full potential.

Today, 50 years later, we have a chance for a do-over. And do we ever need it.

At a press event today in Washington, DC, two prominent faith leaders—the Rev. Liz Theoharis and the Rev. Dr. William J. Barber II—announced plans for a new multi-issue, multiracial Poor People’s Campaign to recapture the revolutionary spirit of 1968. As the campaign’s co-chairs, they’ve been traveling the country for months, holding mass meetings and strategy sessions in 15 cities to lay the groundwork for mobilizations in the spring of 2018.

For those who may doubt the need for such a campaign, a new Institute for Policy Studies report provides more than ample evidence. By many measures, what King called the “evils of racism, economic exploitation, and militarism” are worse today than they were five decades ago. Toss in climate change and other environmental threats, and the picture is even more grim.

Here are just 10 of the numerical lowlights of the past 50 years:

1. Since 1968, the number of Americans below the official poverty line has increased by 60 percent to 40.6 million. While poverty rates are highest among African Americans and Latinos, white people make up the largest number of the country’s poor (17.3 million).

2. The top 1 percent’s share of national income has nearly doubled since 1968 while the official poverty rate for all US families has merely inched up and down. A key driver of this growing economic divide is the steep drop in unionization, from 24.9 percent of workers in 1968 to 10.7 percent in 2016. Income concentration at the top has siphoned resources from those at the bottom and distorted our democracy. 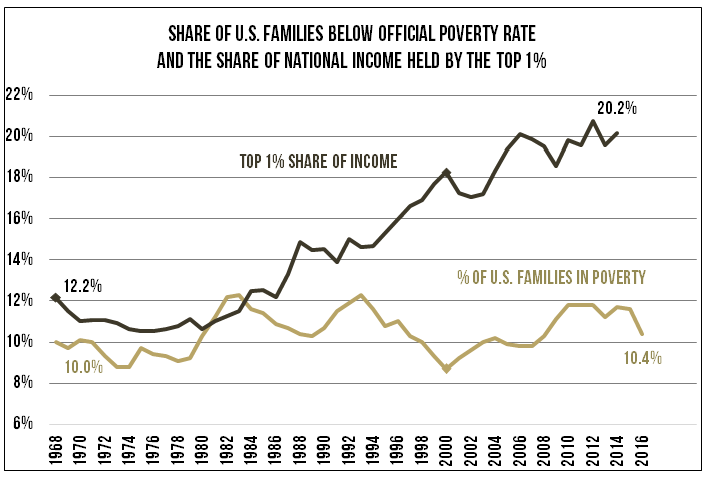 3. After some gains under President Johnson’s “War on Poverty,” the social safety net has taken a beating, with particularly devastating impacts on single mothers and children. In the richest country in the world, 30.6 million children (43 percent) live at or below 200 percent of the poverty line, considered the minimum for meeting basic family needs. Female-headed families are 5.4 times more likely to be living in poverty than families headed by married couples.

4. More than 50 years after the Voting Rights Act, people of color still face a broad range of barriers to democracy, including racist gerrymandering and redistricting, felony disenfranchisement, and laws designed to make it harder to vote. According to the Brennan Center for Justice, 23 states have adopted various forms of voter-suppression laws since 2010, with more restrictive voter-ID laws being the most common.

5. Since 1976, the criminalization of poverty has driven up federal spending on prisons tenfold to $7.5 billion this year. The number of state and federal prison inmates of all races grew from 188,000 in 1968 to 1.5 million in 2015. Racial profiling and biased sentencing and policing practices have expanded the share of inmates who are people of color from less than half in 1978 (the first year for which race data are available) to 66 percent in 2015. 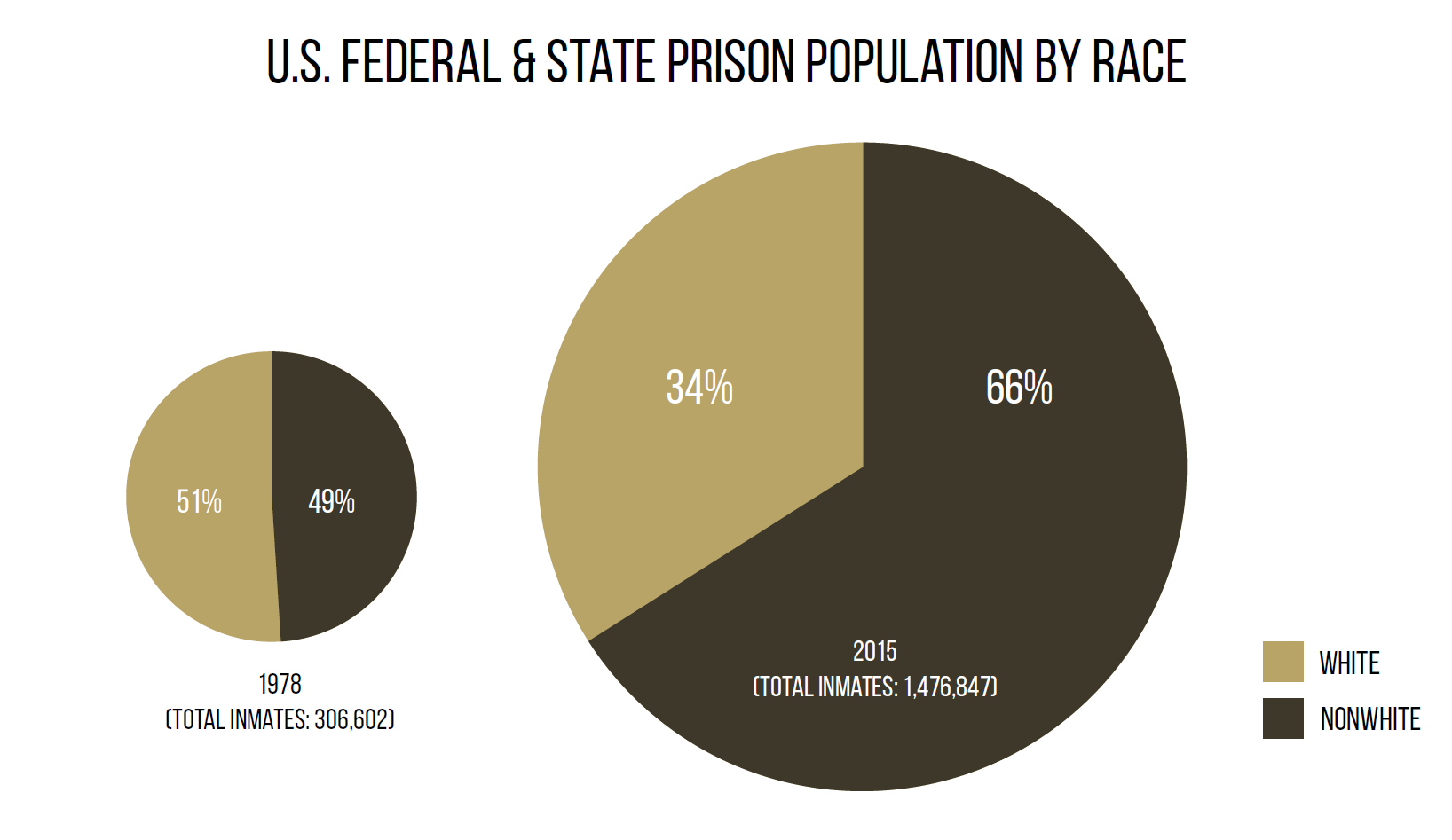 US Department of Justice

6. Increased scapegoating of immigrants is also reflected in government spending trends. Between 1976 and 2015, federal expenditures on border control and immigration enforcement rose eightfold while the number of deportees grew tenfold to 333,000. 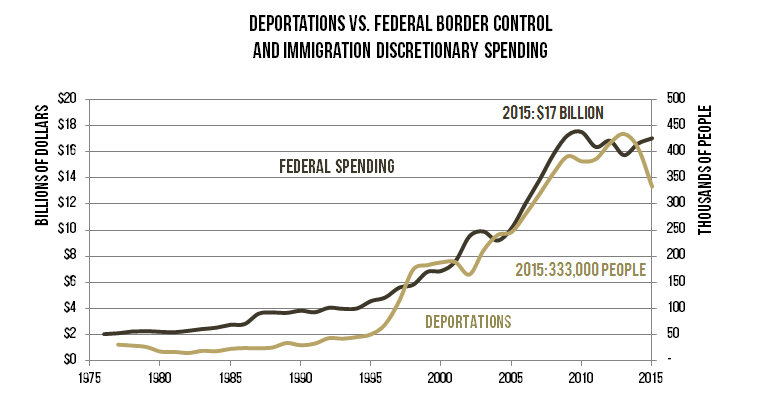 7. Since the height of the Vietnam War, the gap between Uncle Sam’s military and anti-poverty spending has gone even more out of whack. Back then, federal spending on the military amounted to twice the level of discretionary spending to fight poverty. Today this spending gap is nearly four-to-one. In the meantime, millions of lives have been lost in wars that have made us no safer, while “real security” in the form of good jobs, health care, and quality education remains beyond the reach of millions of Americans.

8. Disadvantaged communities here and abroad continue to pay the highest price for American militarism. The poorest 30 percent of US communities suffered 36 percent of the casualties in the Vietnam War and 38 percent in the Iraq War. And while the legal draft of the Vietnam era is no more, it has been replaced with an economic draft. Pentagon data on US casualties from Iraq and Afghanistan reveal that 23 percent came from job-scarce small towns and rural areas that represent only 17 percent of the US population.

9. Since 1968, the environment has become less polluted, but race and income disparities persist in access to clean air and water and exposure to environmental hazards. According to the Centers for Disease Control, at least 4 million families with children are being exposed to high levels of lead from drinking water and other sources. The risks fall heaviest on low-income, African-American, and Latino children, in part because they’re more likely to live in aging, poorly maintained housing.

10. Those who’ve contributed the least to climate change are suffering the most from the related severe weather effects. Low-income families and people of color tend to be more likely to have living conditions and jobs that increase the health risks of extreme heat. They also get hit hardest by natural disasters because of barriers to obtaining property insurance.

The point here, as campaign co-chair Theoharis puts it, is that “even before the election of Donald Trump, the evils of poverty, racism, militarism, and environmental destruction were tearing apart the social fabric in America.” (Theoharis is also co-director of the New York–based Kairos Center.)

And yet with Trump’s racist immigrant bashing and Republican tax and budget plans that would do more to accelerate inequality than any legislation in decades, the need for a modern-day Poor People’s Campaign is even more urgent.

In fact, the GOP tax plan is such a moral abomination that, if adopted, it will likely boost support for the 40 days of coordinated civil disobedience the campaign is planning to kick off on Mother’s Day 2018. Organizers are already expecting tens of thousands of poor and disenfranchised people, clergy, and other leaders to risk arrest in local actions that will feed into a major demonstration at the US Capitol on June 23.

These 50th-anniversary events will not be a commemoration, says Barber, who rose to national prominence as a driving force behind the Moral Mondays Movement. Rather, Barber says, the goal of the new Poor People’s Campaign is to “consecrate a new movement to transform the political, economic, and moral structures of society.”

Correction: An earlier version of this article the number of federal and state prison inmates in 2015. It is 1.5 million.