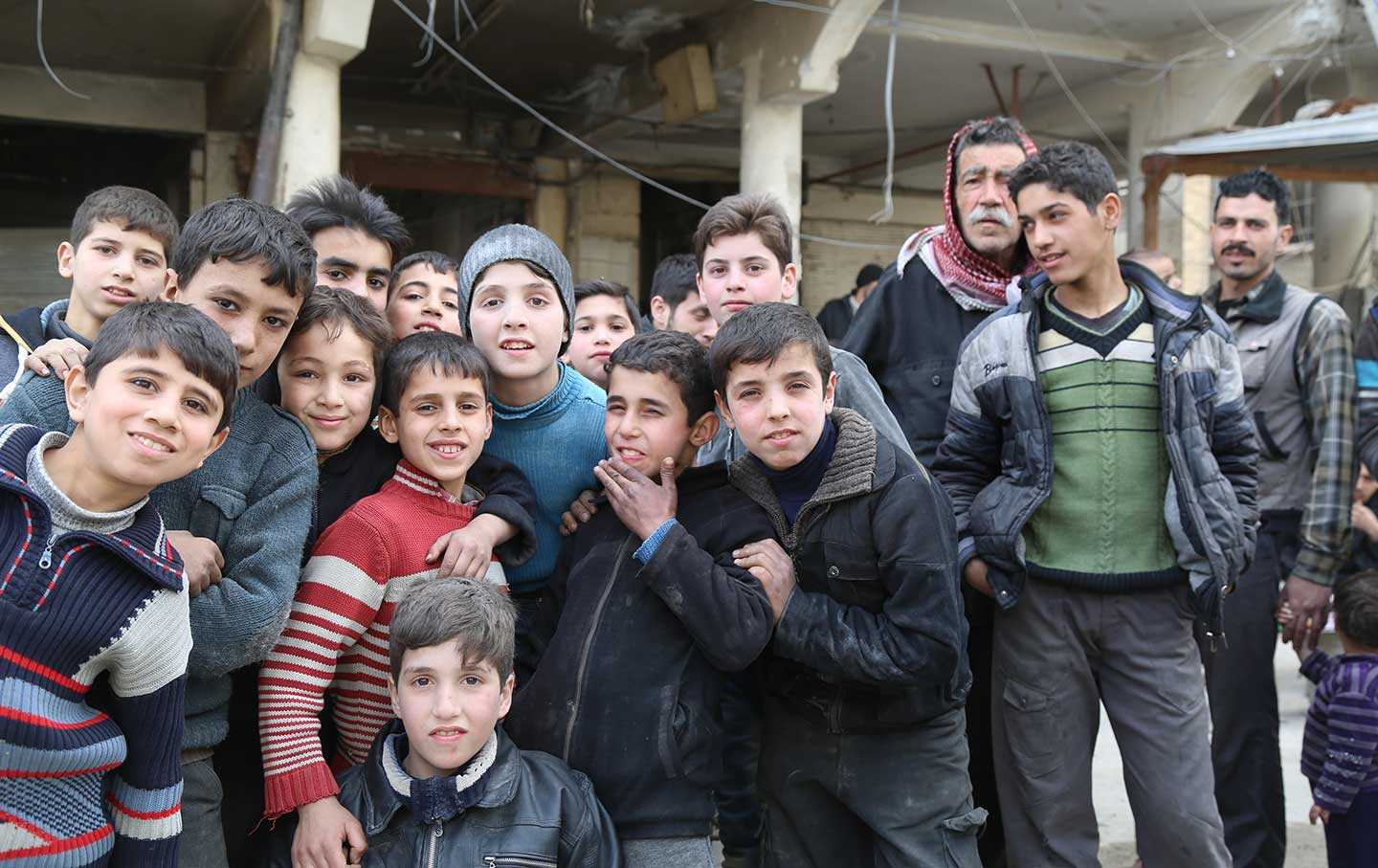 Inside Douma, children have stopped going to school. All they ask about is when they will be able to get out. (WFP / Marwa Awad)

Damascus—On April 8, the city of Douma in Eastern Ghouta fell into government hands after a six-year-long siege. Dozens of buses carrying people—mostly fighters and their families—out of the city are now heading north toward Jarabulus in rural Aleppo.

Just a few short weeks ago, I was at the Wafideen Camp checkpoint waiting to enter Douma on what turned out to be the last humanitarian aid convoy to Eastern Ghouta’s largest municipality. It was March 15, the day the Syrian uprising started seven long years ago. The World Food Programme (WFP) was bringing in life-saving food to people trapped in Douma. White trucks of humanitarian aid slowly inched their way into the city.

As we crossed the front lines into the buffer zone, a bearded man on a bicycle emerged, ghost-like, from a side road out of mounds of rubble. A rifle dangled from his neck. I watched him with an equal mixture of trepidation and anticipation, as he turned and disappeared into the destruction that was once the outskirts of a bustling city.

Until recently, the farms around Douma enabled residents to survive the long siege. But in just three months, most of the farmland has been captured and over 40 percent of Douma destroyed. Today, going out to buy food is a life-threatening exercise. Bombardment compels most residents to live underground. 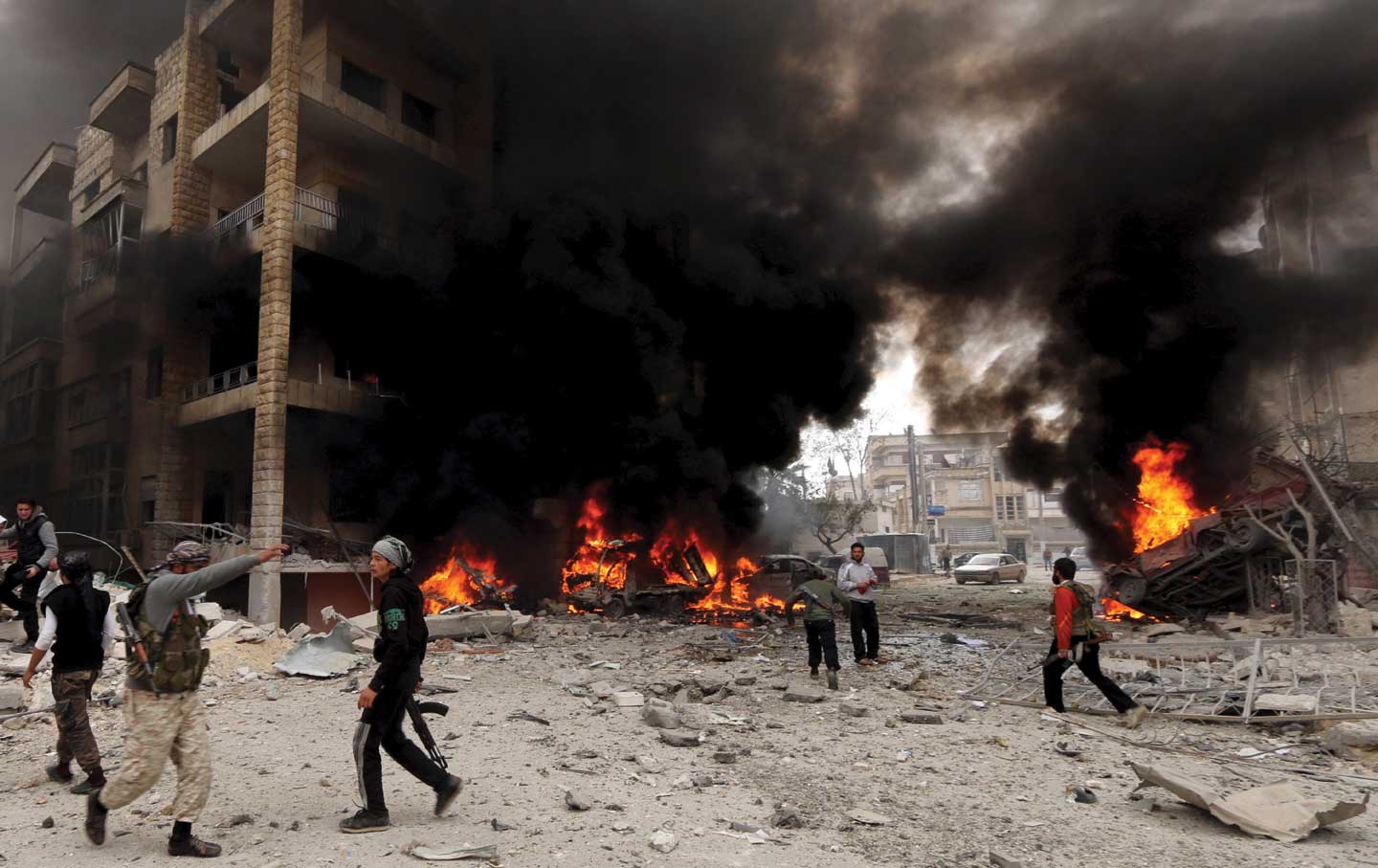 Think the War in Syria Is Winding Down? Think Again.

Yet, as we drove through Douma’s war-scarred streets, it seemed that everyone in the city had come out into the open to watch us. Men stood by the road taking pictures with cell phones. Children ran along the convoy to escort us. Veiled women appeared on balconies to watch the rolling trucks and UN flags fluttering in the wind.

Volunteers gathered to offload aid from the trucks, including WFP’s wheat flour, which the men were taking into underground cellars. According to the local council, we learned that more than 200,000 people remained in Douma, many of them displaced from nearby villages, all of them needing food and medicine. 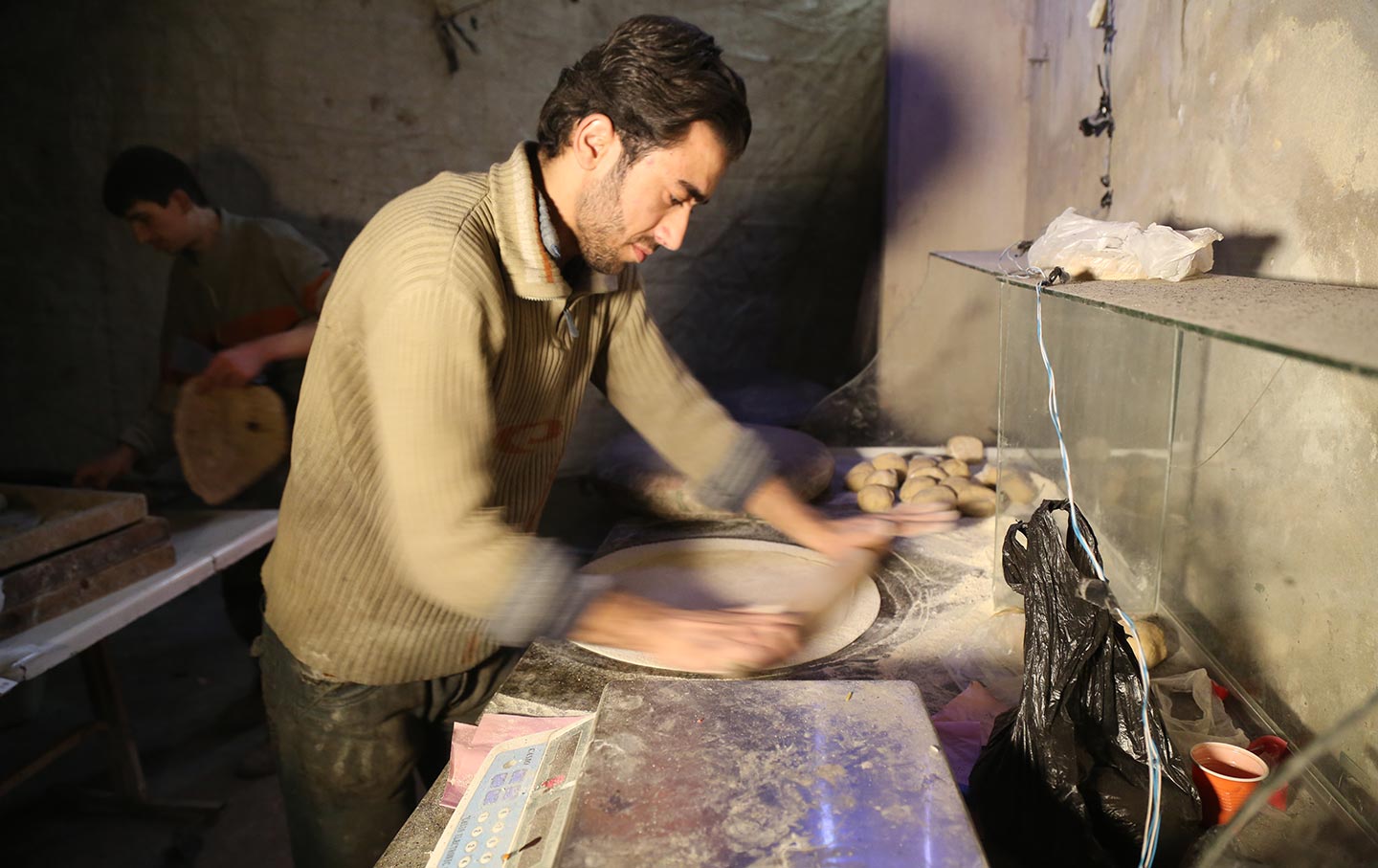 Mustafa rolls dough in a makeshift bakery underground, safer from the shelling above. (WFP / Marwa Awad)

Despite the intolerable living conditions, council members insisted that the people of Douma were staying strong and holding their ground. On the walls of the local council hung a large poster that read “Douma, the Will of Stay ”—a literal translation from Arabic into English.

Leaving the devastation on the ground, we descended a long and narrow staircase deep into Douma’s underworld: a network of basements that, while providing shelter, breeds disease and infection.

Inhabitants are crammed together in packed spaces to avoid airstrikes. Even the shopkeepers have set up their businesses underground. We found one such business, a small convenience store that doubled as a makeshift bakery. There we met Mustafa, a man in his 20s.

“The food aid trickles in very slowly, drop by drop. Many families here are struggling. I hope whoever is hungry gets help,” he said. Because of the increasing demand for food and limited quantities allowed inside, residents of Douma have had to split the food assistance WFP delivered during an earlier convoy in order to reach as many people as possible.

“I feel I am living in a grave, forgotten,” Mustafa said.

Back on the ground, volunteers continued to offload the aid, handing bags of flour along the aisle, sliding them down the ramp and into the cellars. Chaff from the flour hung in the air amid the workers’ tongue-in-cheek jokes and cheerful chatter.

Two young boys, Hamza and Anas, walked up to ask me a question they would repeat throughout the daylong convoy: “Are you here to take us out?” I pointed to the trucks lined up just to their right and said we were bringing in food for them and their families. “But can we go with you?” they pleaded.

“When will the road open? We want to go out!” a third boy asked. Words of comfort were not enough to soothe them, and it broke my heart to see the limits of a humanitarian mission where we fall short of our purpose to ease the suffering of those who languish in poverty. An hour into the offloading, I experienced firsthand why our aid to this besieged city was not enough.

Gradually, we became aware that the faint sounds of bombing and shelling in the distance were coming closer. This escalation made everyone nervous. More volunteers, this time young boys and teenagers, appeared on scene to finish the job faster.

The jokes stopped, while everyone focused on the task. Bags of flour were flying through the air. 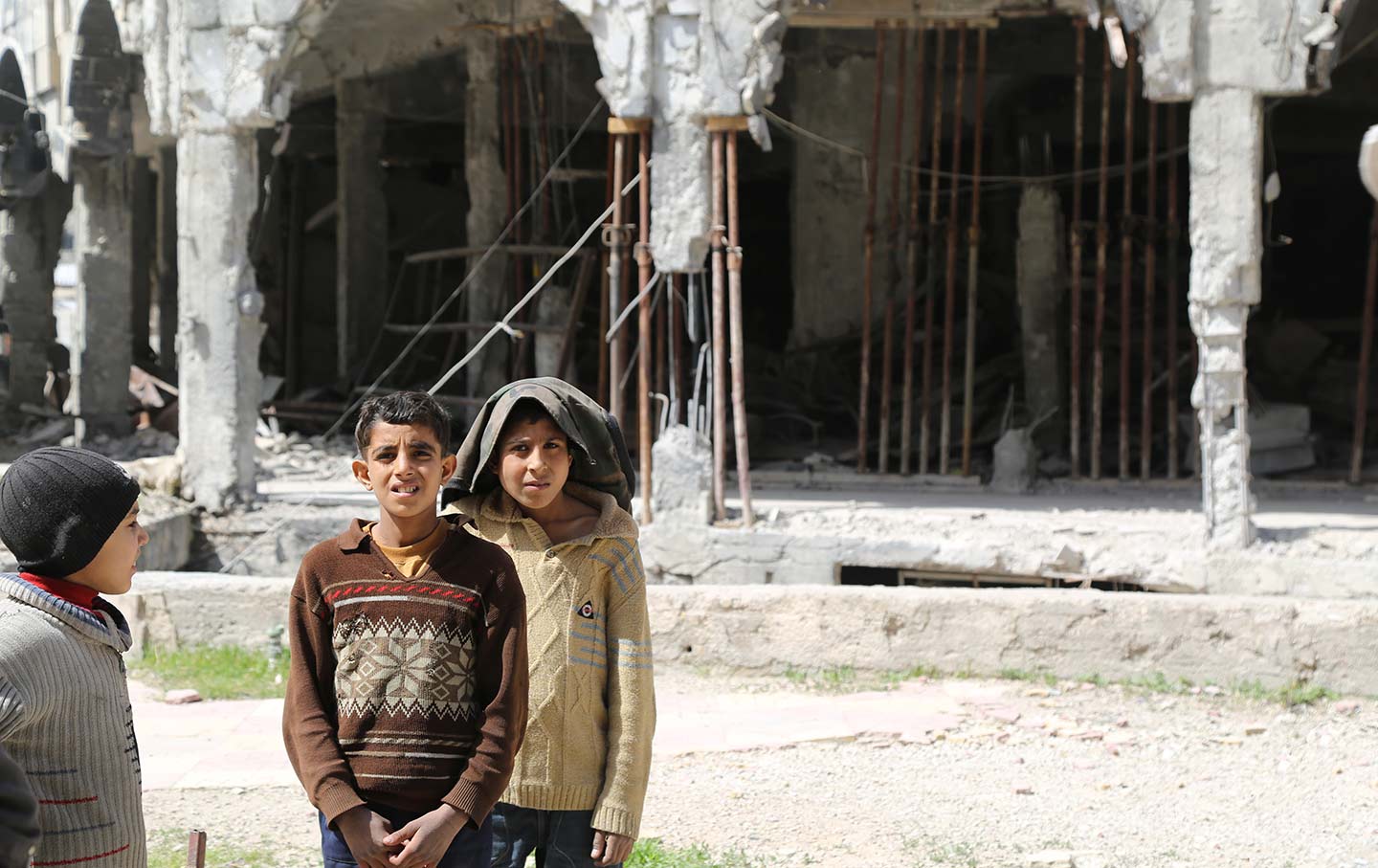 Hamza and Anas (right) want to be out of Douma. (WFP / Marwa Awad)

“Hurry, hurry! Toss it faster!” yelled the lead volunteer as the sound of shelling neared. By now the wheat flour covered the workers, not to mention me and my camera.

Suddenly it came. An airstrike hit less than 100 meters from where we stood. The ground rumbled. Everyone ran for cover under the arched walls of the mosque’s outer hallway. When the shelling stopped — it seemed to last a lifetime — people emerged to finish offloading. The atmosphere was now somber and ominous.

One little boy, named Abdulla, stood by himself in the middle of the damaged area. He caught my attention because of the traumatized, vacant look in his eyes. I asked him if he was all right, but he couldn’t speak for several minutes.

Some local men came and rested their hands on his shoulder. One of them turned to me and said, “This is the life we live every day.”

The situation in Douma is increasingly and visibly desperate, and the local council has spelled out the city’s humanitarian needs to the WFP and the UN team and partners: food, health and sanitary items, medical kits, and equipment and nutritional supplies.

Later in the afternoon, as our team gathered to leave Douma, an older woman came up to me, begging for a way out. “Please, won’t you take me and my daughter out? We are going to die here,” she told me. “What is the point of food and drink if after it we will die?”

As I walked out of the city, so destroyed, I saw Abdulla. He seemed to have regained his bearings. I asked if there was anything I could get him. All he wanted, he said, was to go outside, run around with his friends, and not fear dying.

Now that the city has fallen, I can only hope Abdulla, Hamza, Anas, Mustafa, and many others who begged to come out have survived.