California is often painted by liberal media as the “State of Resistance,” where rationality prevails and the response to Covid-19 has been guided by science. And Los Angeles might appear to be this progressive bastion’s crown jewel: In recent years, media outlets have praised LA’s mayor, rising Democratic star Eric Garcetti, for leading what one Economist story proposed as “the model for a more diverse America.” The mayor’s nightly Covid-19 briefings, streamed on Facebook, “come from a place of love,” one law professor recently told the Los Angeles Times. “He’s tried to come from a place of kindness. He’s trying to build consensus.”

This boosterism obscures the racialized poverty, suffering, and violence that coexist uneasily with astonishing wealth in this paradise of liberal capitalism. LA has never been a friendly place for tenants, but the situation has worsened in recent decades, as wages stagnated and rents soared. Now LA is staring down the barrel of what could be the largest wave of forced evictions in the region’s history, and local leaders—including Garcetti—are refusing to do what’s necessary to secure housing for renters and unhoused Angelenos.

Rather than being a model city, Los Angeles has become a cautionary tale: Even under the best conditions that liberalism and the Democratic Party have to offer, those who don’t own property will be exploited by those who do.

Of the 10 million people in Los Angeles County, about 5.5 million people live in tenant households. With one survey from mid-April finding that less than half of LA County residents still had jobs, that’s a lot of people who won‘t be able to pay rent. On March 27, the City of Los Angeles passed emergency tenant protections that go slightly beyond the statewide measure ordered by Governor Gavin Newsom the same day: Newsom’s order delays eviction proceedings until June 1 for tenants who can’t pay rent because of Covid-19, while LA’s provides these tenants with a legal defense to stave off eviction attempts and gives them more time to pay back rent after the state of emergency is lifted.

Both measures have been misleadingly branded by elected officials and some media outlets as “moratoria” or “bans” on evictions. But under both California’s and LA’s rules, landlords can still file evictions against tenants—and tenants can fight back only if they can prove in court that they lost income because of Covid-19. California’s Judicial Council adopted an emergency rule that prevents courts from hearing or processing nearly all eviction cases during the state of emergency, and for a period of time afterward. Once this rule is lifted, tenants will still bear the burden of hiring lawyers or navigating housing court on their own if they want to stay in their homes. Not only that, but reporting from The Guardian suggests that landlords in LA and across the state are already taking advantage of the confusing patchwork of legal half-measures to serve eviction notices and use other means to force tenants out.

Perhaps these measures’ biggest failure is that even tenants who can prove they lost income because of Covid-19 will still be required to pay back rent to their landlords. Under statewide rules, tenants will immediately be on the hook for missed payments as soon as the courts start processing evictions again, while LA tenants will have 12 months to pay. If nothing changes, this will simply kick the can of mass evictions a year down the road, as potentially millions of renters will be saddled with rent debt they cannot possibly ever pay back.

We know the impact will not be felt evenly across the races. Data recently compiled by the Institute on Inequality and Democracy at UCLA shows that 68 percent of black residents and 62 percent of Latinx residents in LA County are renters, compared to 46 percent of whites. Even before the pandemic, racialized displacement in recent years was staggering: LA County has lost over 160,000 black residents since 1990—even while the population increased by at least 1 million—and neighborhoods such as Hollywood have seen massive displacement of Latinx families. LA County’s nearly 60,000 unhoused residents are disproportionately black: About 1 in 40 black Angelenos are unhoused, whereas for white Angelenos that number is 1 in 250.

A recent legal analysis from public interest attorneys, boosting grassroots demands, argues that local governments in California possess the legal authority to cancel rent during an emergency like this—a “temporary rent suspension,” in their words. But elected officials in LA have refused to enact stronger eviction protections, while also asking the federal government to rescue tenants (and landlords) instead. In both March and April, the LA City Council voted against stronger measures that would ban nearly all evictions during the crisis—then later approved a resolution that stated support for Ilhan Omar’s recent bill canceling rent and mortgage payments during the pandemic. LA elected officials proclaim the need for tenant protections, but they refuse to use their own power to keep people in their homes.

These contradictions extend to plans for unhoused people, too. In early April, Governor Newsom announced the creation of Project Roomkey, whereby the state would work with city and county governments to get California‘s most vulnerable unhoused residents into vacant hotel rooms. In LA County, this effort is being spearheaded by the Los Angeles Homeless Services Authority, and officials have set their own goal of bringing 15,000 people into hotel rooms. But LA County has a total unhoused population of nearly 60,000, and authorities are moving at a snail’s pace: Fewer than 1,800 people had been placed in hotel rooms as of May 5. The program also relies on the voluntary cooperation of hotel owners, who are being reimbursed at an agreed-upon price hammered out through individual negotiations.

Housing advocates have asked elected officials to use their emergency powers to commandeer these hotel rooms instead, to ensure that all residents have safe and secure shelter during this deadly pandemic. “If you can tell the entire city of Los Angeles that we can shelter in place, then you can tell the hotels they are commandeered and they need to open their doors to the residents of skid row,” Shayla Myers, an attorney with the Legal Aid Foundation of Los Angeles, recently told the Los Angeles Times. But so far, officials have refused.

That’s why some of those who are most impacted are taking matters into their own hands. On May Day, Davon Brown—a black man made recently homeless in Echo Park—joined with organizers from Street Watch LA to occupy a hotel room in the Ritz-Carlton in downtown LA. They intended to stay until Garcetti used his emergency powers to provide hotel rooms for all unhoused residents in the city, echoing the demands made by the statewide No Vacancy CA coalition. They were quickly arrested by LAPD officers that same day and cited for trespassing.

“We have a room for you,” Garcetti claimed at a press briefing that night in reference to Brown. But Brown himself says he is not eligible for the existing program; a week after his arrest, he was still living in a tent in Echo Park. Garcetti had also stated recently that there was not a backlog for these hotel rooms, a claim that was quickly debunked. Activists are growing increasingly frustrated by the slow pace of negotiations. Even if LA’s plan works, tens of thousands of people will remain on the street. 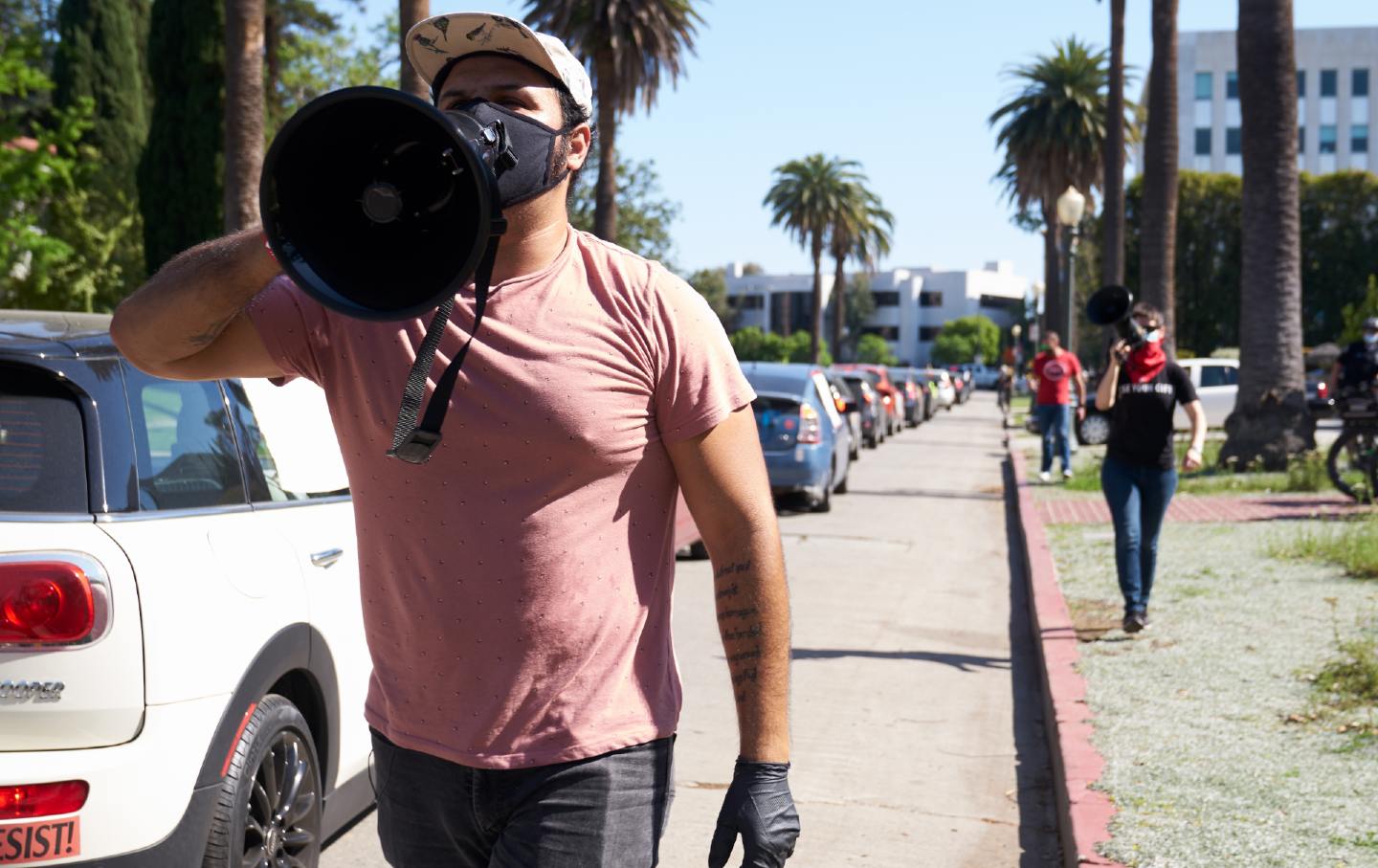 While typically staid nonprofit organizations tend to dominate local discussions of housing policy, grassroots organizers such as myself have seen the need for a (socially distanced) escalation. The LA Tenants Union and Alliance of Californians for Community Empowerment are organizing mass rent strikes, and an ad hoc group calling themselves the People’s City Council (PCC) has held about a dozen “car protests”—in which people park their cars or drive in a circle around a set route, with cars decorated and horns blaring—in the neighborhoods where the mayor and city councilmembers live, demanding the cancellation of rent and the immediate use of vacant hotels to house all unhoused residents. Members of the PCC recently held a May Day protest outside Garcetti’s mansion in wealthy Hancock Park, featuring a mariachi band and dozens of cars, creating a deafening and raucous scene in this otherwise quiet neighborhood.

So far, the response from Garcetti and City Council has been disappointing. In late April, Garcetti proposed an austerity budget for the fiscal year starting July 1 that would make cuts to a broad array of services—including a 6 percent cut to programs that address homelessness—and furlough 16,000 city employees. The LAPD’s funding, however, will increase, rising to a staggering $1.86 billion in the 2020–21 fiscal year.

This is consistent with what many local tenant and unhoused organizers say is the city’s primary official response to homelessness: handcuffs, not house keys. The Los Angeles Times reported that in 2016, one in six of all arrests by the Los Angeles Police Department targeted unhoused residents; by the LAPD’s own numbers, one-third of all “use of force” incidents in 2018 involved someone experiencing homelessness. State violence against people experiencing homelessness has continued during the pandemic—including an incident on April 27, in which an LAPD officer was caught on camera beating an unarmed, unhoused man in Boyle Heights.

The state is likely to make additional cuts, as officials announced in early May that California is facing a $54 billion deficit. Yet elected officials at the local and state level are considering little in the way of tax increases on wealthy residents—even though, as of 2018, California had 144 billionaire residents collectively worth over $700 billion, and over a million millionaire households. Instead, Governor Newsom, like LA officials, is pointing his finger at Washington. “We really need the federal government to do more,” he said.

Those who are struggling to survive right now can’t wait to find out whether the federal government will swoop in. The current surge of direct-action protests represents the most intense pressure on LA’s elected officials from the left in recent times, and some recent actions do suggest elected officials are feeling the heat. On May 6, the LA City Council voted to extend a temporary rent freeze on rent-stabilized units. The council has also voted unanimously to request a report from county authorities on which hotels have received public subsidies and whether they are participating in Project Roomkey, allowing even the most anti-tenant council members to posture as champions of the downtrodden.

These moves may make for nice press releases, but they’re far from what activists are demanding. A crisis like this one can open the way for radical possibilities. We refuse to accept that such a spectacularly wealthy city and state cannot take care of its own residents—and until everyone is housed with dignity, both during this crisis and beyond, we will continue to fight.