The nation is mourning the death of John Lewis, the sharecropper’s son who rose to become a leader of the Student Nonviolent Coordinating Committee (SNCC), a hero to the Black freedom movement, and a respected member of the US House of Representatives.

Yet I cringe at so many of the hollow tributes that ignore Lewis’s real legacy and the unfinished agenda of the struggle that shaped him.

Some of the most gut-wrenching scenes of the civil rights movement occurred on Bloody Sunday in March 1965, when state troopers battered and bloodied protesters as they tried to march across the Edmund Pettus Bridge in Selma, Ala. Harrowing photos of a trooper beating Lewis on the ground are a part of a powerful historical archive often displayed to demonstrate “how far we have come.” And there has indeed been progress. But as recent uprisings against racism, triggered by the police and vigilante murders of George Floyd, Breonna Taylor, Ahmaud Arbery, Tony McDade, and others make clear, the battle is far from won.

Only a few hours after Lewis died on Friday, another gut-wrenching image emerged—the image of a teenage Black girl bloodied in downtown Chicago during a protest. A police officer had punched her in the face, knocking out a front tooth. Crying, holding her busted lip, the young girl—whose parents, with great hope in their hearts, named Miracle—could easily have been one of the Selma protesters. Brave, bold, idealistic, and determined, she is one of thousands of 21st century racial justice freedom fighters who have flooded the streets in every corner of this nation, making this what The New York Times has described as likely the largest protest movement in history.

Miracle Boyd and more than 1,000 others filled the streets of Chicago on Friday night, and like the Bloody Sunday protesters over half a century ago, they were protesting both the symbols and the substance of American racism. An alliance of Indigenous and Black activists in Chicago—BYP100, Let Us Breathe Collective, and CHI-Nations Youth Council—had come together to insist that the City remove a memorial to the racist plunderer Christopher Columbus. The statue is a hovering reminder that Chicago exists on stolen Indigenous land and that Black, brown, and Indigenous residents don’t feel we belong in a place that pays homage to people who captured and murdered our ancestors. It is a reasonable and righteous demand. Columbus’s crimes against humanity are notorious: slavery, torture, kidnapping, genocide, and land theft. The protesters met with another form of violence: police, who beat and pepper-sprayed them, and detained many for the night. When police beat Lewis and his fellow protesters in1965, it was on a bridge named after Confederate war hero and Ku Klux Klan member Edmund Pettus. Southern politicians were willing to ride roughshod over the violent suppression of Black citizens in the shadows of monuments to white supremacy. The resonant symbolism, then and now, is as powerful as it is painful. 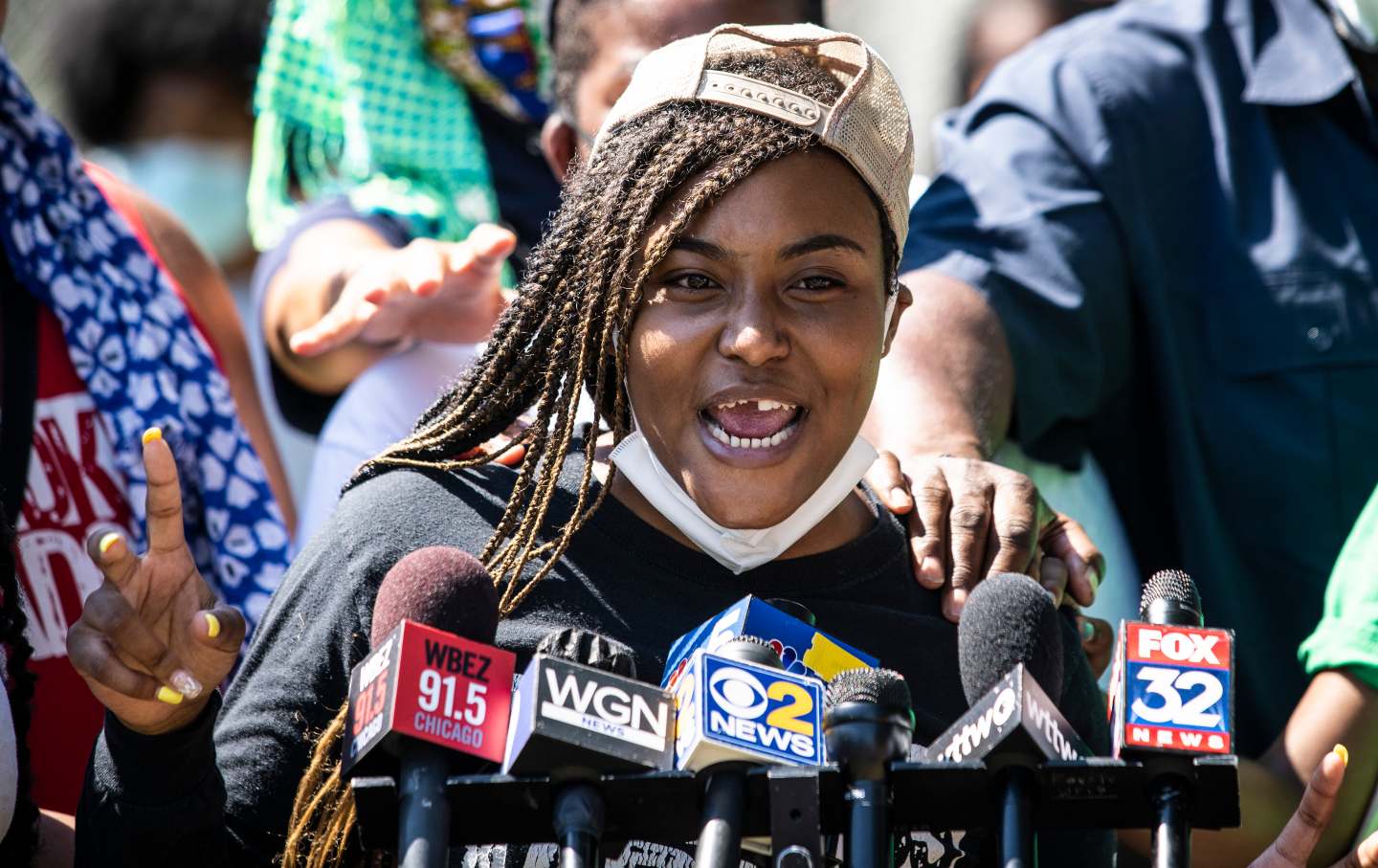 Those who criticize young activists today as too radical or impatient should remember the John Lewis of 1963. He was the youngest speaker at the historic march on Washington, at the age of 23. And the elder civil rights and labor establishment viewed Lewis and his comrades in SNCC as militant hotheads. In Lewis’s original speech, he criticized President John F. Kennedy’s civil rights bill as “too little, too late,” and accused him of trying to “take the revolution out of the streets and put it into the courts.” Lewis called patience “a dirty nasty word,” and said Black people were “tired of being beaten by police.” He called for mass protests across the country: “Get in and stay in the streets of every city, every village, and every hamlet of this nation until true freedom comes, until the revolution is complete.” Those words made a lot of people nervous, and the night before the speech, A. Philip Randolph and others persuaded Lewis to tone it down. But that was the sentiment of the Black youth leaders that Lewis represented in 1963.

If Black youth were tired then, they are really fed up now. Miracle’s generation is even more impatient than Lewis’s—and with good reason. Their neighborhoods have been stripped of resources, their schools defunded and militarized, and many of their peers are in jail, dead, or languishing in poverty-wage jobs. And as a result, their vision of freedom is large and growing. SNCC itself kept expanding its struggle from the lunch counter sit-ins in 1960 to its role in the dangerous Freedom Rides in 1961 to helping to midwife the Mississippi Freedom Democratic Party in 1964 to its historic and controversial stand against the Vietnam War in 1966. Dr. Martin Luther King Jr. had more than his share of philosophical debates and tactical differences with the young militants in SNCC, but by the end of his life in 1968, King and SNCC had similar priorities. Their shared view was not a narrow call for integration. King warned eloquently in his April 4, 1967, speech in Riverside Church, exactly one year before his assassination, of the triple evils of militarism, racism, and poverty. The Movement for Black Lives nationally and the work of organizers like Miracle Boyd have picked up where King, SNCC, and Lewis left off. The circumstances are different, but the challenges are still state violence in its many forms, white supremacist polices, and extreme poverty amid extreme wealth.

A low-wage essential worker, recent graduate of Chicago’s beleaguered public schools, and resident of one of Chicago’s underserved South Side communities, Boyd has many battles to fight, and she sees them as interconnected. “People deserve better than this,” she insisted in a recent interview. This simple conclusion motivates her activism as one of the leaders of GoodKids MadCity, a group that leads a dual campaign against police in the schools and community-based violence fueled by lack of jobs and services. In a CBS interview with Gayle King six weeks before his death, Lewis reflected on this current generation of activists with pride and hopefulness. “We’re on our way to greater change,” he said. This uprising, he added, “is so much more massive and more inclusive.” Looking back on his 23-year-old self, maybe he knew a miracle was rising.

The Searching Poetry of Safia Elhillo

The Most Painful Episode of the January 6 Insurrection