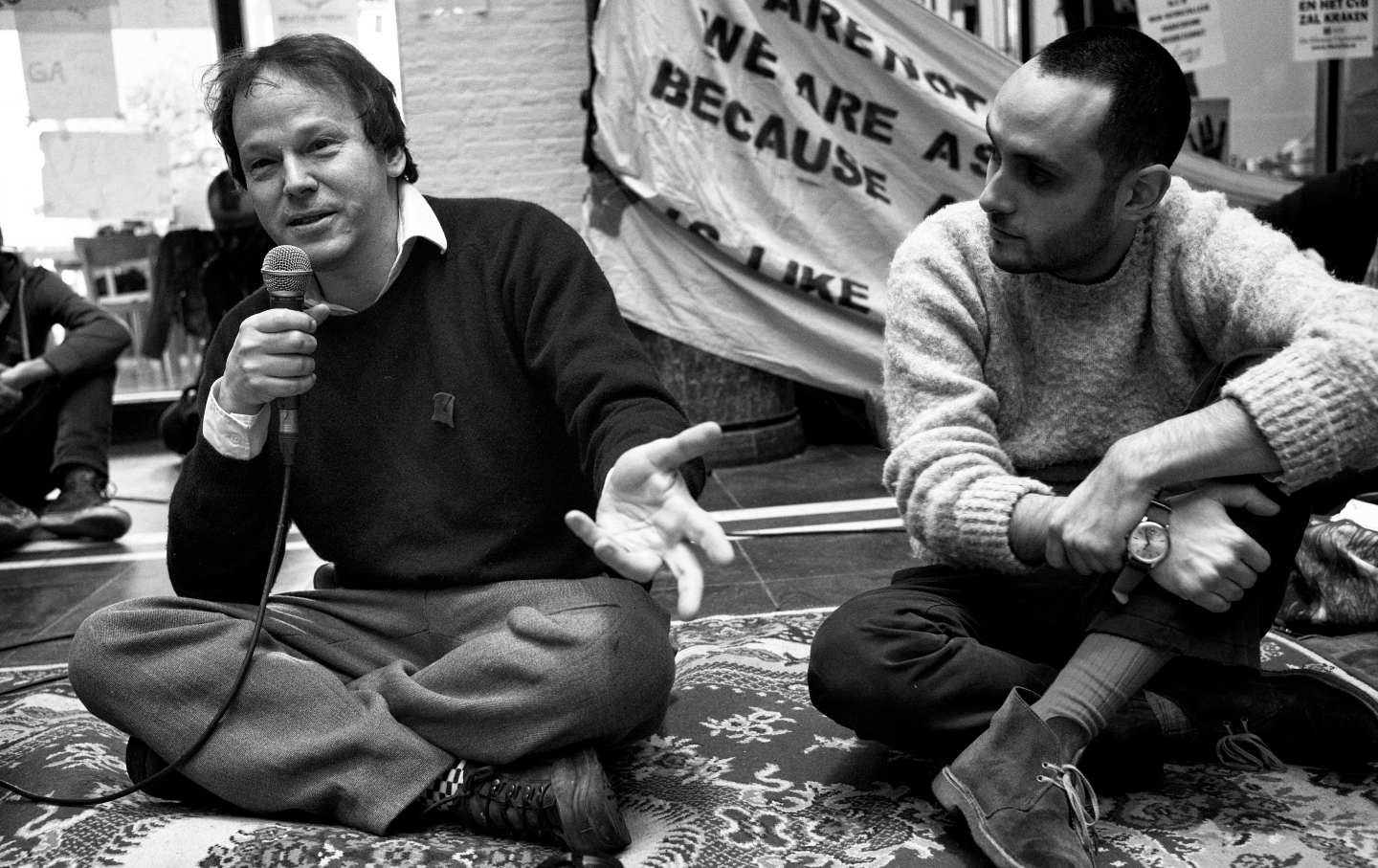 David Graeber, left, speaks at the Maagdenhuis occupation at the University of Amsterdam in March 2015. (Wikimedia Commons / Guido van Nispen)

I met David Graeber on August 2, 2011, at the first general assembly of Occupy Wall Street. The GA was chaotic, with socialists using a microphone to try to wrangle us anarchists. We wanted something a little less hierarchical, so a handful of us got up and sat in a circle at the other side of the small Wall Street park. Graeber saw us and came over to introduce himself: “Hi, I’m David. Can I sit with you?”

Can Debt Spark a Revolution?

I didn’t connect the middle-aged man in a baseball cap with his newly released red-brick masterwork Debt: The First 5,000 Years, and he didn’t help me get there. He didn’t grandstand or lecture or say a pointed word about “debt” or do anything I would expect from an admired intellectual at a political meeting. Mostly, he listened. Afterward, I heard the whispers: That was David Graeber.

Graeber went underappreciated at home. A proud product of the New York City working class, he became a junior faculty cautionary tale when Yale tried to cut his promising academic career short. The school denied it was retaliation for Graeber’s unabated anarchist activities, but scholars and organizers alike knew better. When he couldn’t find another American teaching job, he never doubted he was blacklisted. Yale and the rest of the American academy weren’t wrong to be afraid of Graeber, but abroad he was in demand. By the end of his life he’d found a professorship at the London School of Economics.

Of the 21st century American left’s writers, Graeber is among the most likely to be read in 100 years—not just because his work is so original, so varied, and so deep, but also because it speaks to transhistorical practices of mutual belonging and rebellion against authority. And yet he never settled into a self-satisfied intellectual groove. Forever known—over his protestations—as “the anarchist anthropologist” after his influential collection Fragments of an Anarchist Anthropology, Graeber’s subjects ranged from the politics of rural Madagascar to participant observation of the global justice movement to the fascist messaging of superhero movies. He could also turn an evocative phrase; it remains to be seen whether his “the 99 percent” or “bullshit jobs” will be more influential.

Some people think anarchists don’t have leaders, but that’s not true. Graeber led with his actions as well as his intellect, and he was dependable in a way that few famous men are: The collective struggle for liberation always came first.