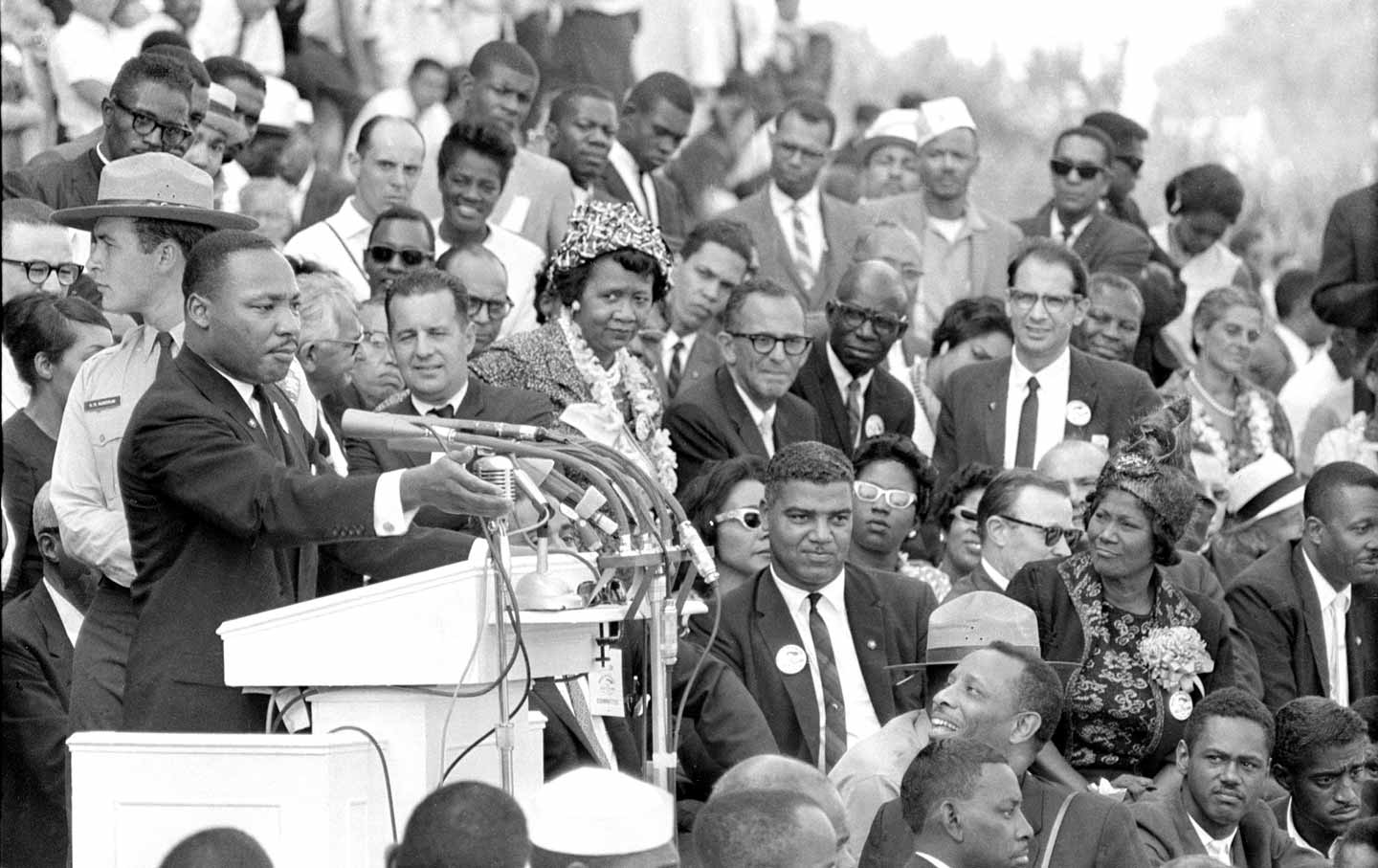 The Rev. Dr. Martin Luther King Jr. gestures during his "I Have a Dream" speech as he addresses thousands of civil-rights supporters gathered in front of the Lincoln Memorial for the March on Washington for Jobs and Freedom in Washington, DC, August 28, 1963.

The Rev. Joseph Lowery once said of his friend and comrade across decades of civil rights activism, the Rev. Dr. Martin Luther King Jr., “He was a nonviolent militant. He was a Christian radical.”

Those words well described Lowery, who has died at age 98. Across the better part of seven decades, his was a prophetic voice for peace, crying out against war and militarism as part of a faith-based call for universal understanding and justice. Often he did so at great personal cost, earning scorn for calling out presidents—especially George W. Bush—who chose conflict over diplomacy.

With the news of Lowery’s passing, on March 27, came all the good and necessary tributes. A native of segregated Alabama, who was born less than 60 years after the end of the Civil War, he helped lead the Montgomery bus boycott and then joined King, Fred Shuttlesworth, and others in founding the Southern Christian Leadership Conference (SCLC). His organizing and activism put Lowery at the center of the civil rights movement, making him, in the words of former President Barack Obama, “a giant of the Moses generation of civil rights leaders.”

“It was just King, Lowery and a few others, huddled in Montgomery, who laid the groundwork for the bus boycott and the movement that was to follow,” Obama said of the late pastor, who delivered a remarkable “in the joy of a new beginning” benediction for Obama’s 2009 inauguration.

After the death of King and so many other civil rights pioneers, Lowery carried on, taking over as head of the SCLC in 1977 and leading the organization through two decades of activism on domestic and international issues—particularly the struggle against apartheid in South Africa that introduced him to a new generation of activists.

Lowery’s global focus built upon the message King delivered in his April 4, 1967, “Beyond Vietnam—A Time to Break Silence” address at Riverside Church in New York City. It was in that speech that King made the connection between the civil rights movement and the peace movement. “There is at the outset a very obvious and almost facile connection between the war in Vietnam and the struggle I, and others, have been waging in America,” he explained.

A few years ago there was a shining moment in that struggle. It seemed as if there was a real promise of hope for the poor—both black and white—through the poverty program. There were experiments, hopes, new beginnings. Then came the buildup in Vietnam, and I watched this program broken and eviscerated, as if it were some idle political plaything of a society gone mad on war, and I knew that America would never invest the necessary funds or energies in rehabilitation of its poor so long as adventures like Vietnam continued to draw men and skills and money like some demonic destructive suction tube. So, I was increasingly compelled to see the war as an enemy of the poor and to attack it as such.

Perhaps a more tragic recognition of reality took place when it became clear to me that the war was doing far more than devastating the hopes of the poor at home. It was sending their sons and their brothers and their husbands to fight and to die in extraordinarily high proportions relative to the rest of the population. We were taking the black young men who had been crippled by our society and sending them eight thousand miles away to guarantee liberties in Southeast Asia which they had not found in southwest Georgia and East Harlem. And so we have been repeatedly faced with the cruel irony of watching Negro and white boys on TV screens as they kill and die together for a nation that has been unable to seat them together in the same schools. And so we watch them in brutal solidarity burning the huts of a poor village, but we realize that they would hardly live on the same block in Chicago. I could not be silent in the face of such cruel manipulation of the poor.

Lowery never lost sight of this connection. He joined King in opposing the Vietnam War. After King’s assassination, Lowery stepped to the front lines of the anti-war movement—often at the side of the slain civil rights leader’s widow, Coretta Scott King. In the 1980s, as the head of the SCLC, he denounced the Reagan administration’s “interventionist” policies in Latin America and opposed US aid to the Contra forces that attacked Nicaragua. When few others stepped up to do so, he denounced the 1983 US invasion of Grenada as “premature and opportunistic” and “probably illegal and immoral.” He was an early and ardent critic of US invasions and occupations in the Middle East.

As the years passed and the men and women with whom he had marched were buried, Lowery was hailed as “the dean of the civil rights movement.” Yet he refused to err on the side of elder-statesman moderation in the struggle for justice and peace. Recalling the legacies of King, the Rev. Ralph Abernathy, and former Georgia state Senator Hosea Williams, Lowery said upon turning 85 in 2006, “I can’t [retire] because Martin is gone. Ralph is gone. Hosea is gone, I’m still here. God kept me here because I have been speaking the truth. Because I stand up against war and racism.”

Lowery’s determined opposition to unnecessary and immoral warfare drew national attention that same year when he preached one of the greatest funeral orations in American history in the sanctuary of the New Birth Missionary Baptist Church near Atlanta. Mourning the death of Coretta Scott King, Lowery stood a few feet away from then-President George W. Bush, whose administration had three years earlier led the US into war with the claim that Iraq possessed weapons of mass destruction.

Recalling that “she summoned the nations to study war no more,” he declared, “She deplored the terror inflicted by our smart bombs on missions way afar.” Then, as a crowd of 10,000 rose to its feet and raised righteous applause, Lowery thundered, “We know now there were no weapons of mass destruction over there. But Coretta knew, and we know, that there are weapons of misdirection right down here. Millions without health insurance. Poverty abounds. For war, billions more, but no more for the poor.”

Lowery took some criticism for his words. But he made no apology. They were well-chosen, their message sincere. “I certainly didn’t intend for it to be bad manners,” he said. “I did intend for it to call attention to the fact that Mrs. King spoke truth to power. And here was an opportunity to demonstrate how she spoke truth to power about this war and about all wars.”

Like Dr. King and Mrs. King, Rev. Lowery opposed racism and injustice and violence in all its forms, as part of a movement that never hesitated “to witness against war and to speak truth to power.”