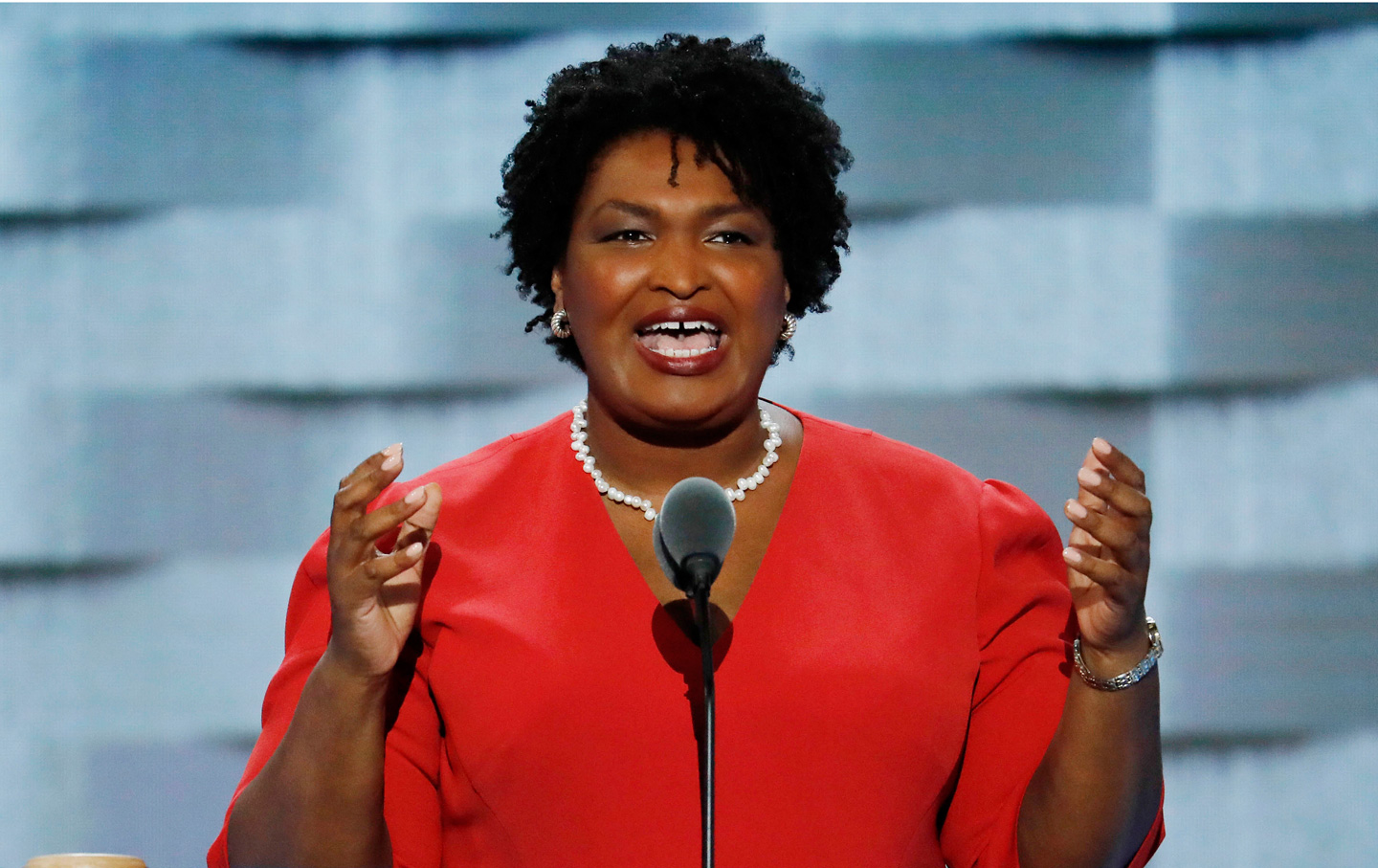 Stacey Abrams believes the United States can have safe and fair elections. But she recognizes that Georgia’s June 9 primary election was a disaster. The Atlanta Journal-Constitution headline on the morning after a day of voting that was marred by long lines, understaffed polling places, and a general sense of chaos was “‘Complete Meltdown.’” When Republicans tried to blame county officials instead of GOP Secretary of State Brad Raffensperger, Stacey Abrams called BS. Abrams, whose 2018 Democratic gubernatorial bid was derailed in another mangled Georgia election, said, “It is not sufficient to say that the county you live in determines the quality of your democracy. That’s why we have the secretary of the entire state—not just the counties that do it right, not just the counties that have the resources, not just the counties that he likes.”

The former Georgia legislative leader, who had to wait in a long line to vote in person in this year’s primary because the absentee ballot she had requested did not arrive, said, “All I can think about are the people who did not receive their ballot, who were forced instead into hours-long lines, and not because they failed to do their part but because the Secretary of State’s office failed to manage this election.”

If the nightmare that played out in Wisconsin on April 7, when Republicans forced in-person voting at the peak of the coronavirus pandemic was a wake-up call, the June 9 meltdown in Georgia was a red alert. We have to act now to assure that things don’t go wrong this fall when voters across the country head to the polls. Abrams, who heads the voting rights group Fair Fight, spoke with me recently about how—in the face of unresolved Covid-19 threats, mass unemployment, and all the other issues facing the country—to get things right in November. Here are some highlights from our conversation.

ohn ichols: What are the steps that we should take as a country, and in particular states, to assure that we have a successful November election?

tacey Abrams: For November, it is a very clear set of responsibilities:

Number one, we have to have vote-by-mail. Vote-by-mail exists in every single state already (as absentee voting). We simply have to scale it so that every state can execute it at the level necessary for a country in crisis, and that is doable.

So if we think about it as a toolbox—vote-by-mail, in-person early voting, and in-person Election Day voting—is the safest, most acceptable way to generate a high-turnout election.

To do so, we have to meet some gold standards:

If we meet those gold standards, if we make sure that there’s the opportunity for registration on the same day or early online registration, then we can have successful elections.

And I’ll point out this: South Korea had their first incidence of Covid-19 around the same time as the United States. In the midst of their process, on April 15, they had a national election, which achieved the highest turnout that they have had since the 1990s. President Moon managed to maintain and manage a successful democracy in the midst of a pandemic.

I believe America is capable of doing the same. I do not believe that there is any justification—certainly not the abject lie of rampant voter fraud—that should deter us from doing what the majority of Americans believe, which is that if you’re eligible to vote, you should be able to vote, and that means you should be able to vote by mail if you choose, and if you choose not to or cannot, that you can vote in-person.

JN: You are a Wisconsin native, born in Madison. Tell me how you felt, what you thought, as you saw the play-out of the Wisconsin election on April 7.

SA: It was horrifying. It was anti-American. It was mean and callous. But it was also an example of how vital the work that not only Fair Fight 2020 does, but that other organizations are doing. It’s vital to our nation’s future.

We worked very closely with Ben Wikler, the chair of the Democratic Party in Wisconsin, and with Dave Kronig, who is the voter protection director. We set up hotlines that they were able to use in advance. Typically these things don’t get set up until right before a general election, but they were in place in Wisconsin during early voting and during the early process so that people could call and when information changed, when overnight the governor was thwarted by the state legislature, and when the state legislature pushed its narrative and got part of what they wanted from the Supreme Court.

Every one of those moments, we had people ready to answer those questions at a scale to meet the moment.

I have family that lives in Wisconsin. I have family that suffers from Covid-19. And they know, as do most Wisconsinites, that their ability to shape their future, and particularly their recovery, was dependent on participating in that election.

There should never be a moment in American history again where we tell people they have to put their lives on the line in order to practice the most fundamental act of democracy, and that is casting their vote.