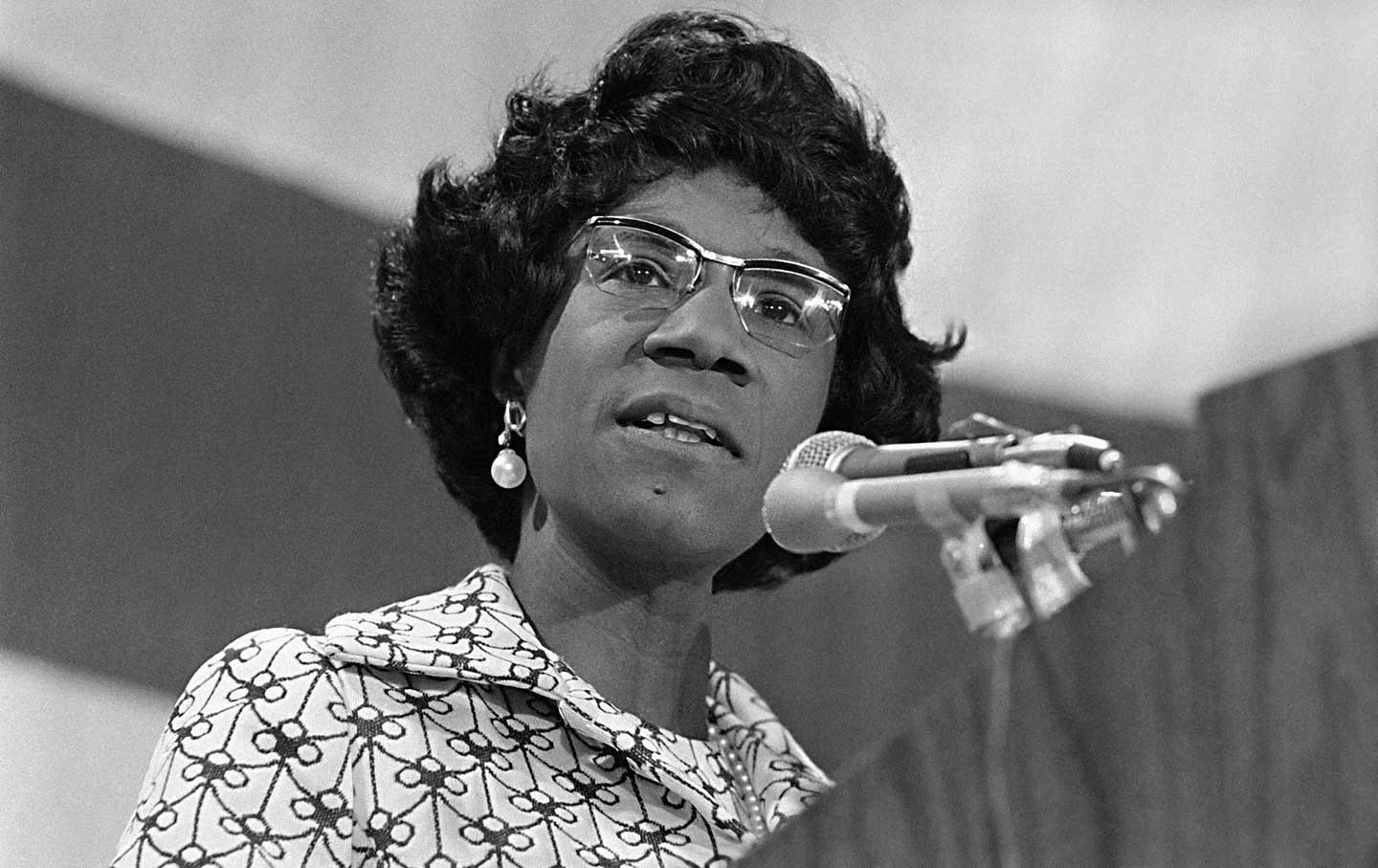 Shirley Chisholm before the panel drafting the platform for the Democratic National Convention in 1972.

Jackson Lee knew the answer to her rhetorical question. Almost 50 years after Chisholm mounted a groundbreaking presidential bid, the first Black woman to serve in the US Congress is having a moment.

The vice president of the United States is hailing Chisholm as an inspiration. New York City is preparing to honor Chisholm with a monument in Brooklyn. Representative Yvette Clarke (D-N.Y.) has been building support for a plan to erect a Chisholm statue in the US Capitol. And Academy Award–winning actress and director Regina King just announced plans to produce and star in a new film recalling Chisholm’s groundbreaking 1972 presidential campaign.

“Shirley Chisholm’s fearless determination has been an inspiration to so many of us,” announced King, “and with this film we hope to inspire many generations to come.”

Chisholm’s capacity to inspire is undeniable.

“I wouldn’t have registered to vote had it not been for Shirley Chisholm, trust me!” the California Democrat recalled when we talked a few months ago about the moment when, as a California college student, she met the congresswoman from New York. “[In the early 1970s] the Democrats didn’t bring anything to what I thought they should in terms of an agenda for everyone, for the people, and neither did the Republicans, so I said, ‘Forget it, I’ll be Black Student Union president and a community worker with the Black Panther Party.’ That was my political work. And here comes Shirley Chisholm, and she convinced me that she thought I had something that I could contribute to the political system, and the rest is history!”

Chisholm’s influence extended to my home state of Wisconsin. I was a preteen witness to it, as the 1972 Democratic presidential primary campaign unfolded in Madison. I’ve still got my yellow-and-black “Take the Chisholm Trail to 1600 Pennsylvania Avenue” pin, and my red-white-and-blue “Catalyst for Change” badge, along with other relics from the intrepid campaign that asked Wisconsinites to imagine that the first Black woman to serve in the House of Representatives could—and should—be the first Black woman president.

Forty-eight years ago, “People for Chisholm” backers met in Madison’s community centers and on the University of Wisconsin campus to plot a genuinely grassroots campaign. Chisholm attracted support on campus and in the lefty wards nearby. She even had a cadre of backers in the rural townships southwest of Madison. Chisholm won just under 10,000 votes in Wisconsin that year—better than several of the former presidential contenders, senators, and House members she was running against, but far from a win.

It was never easy for Chisholm or her backers.

“I’m a revolutionary at heart now and I’ve got to run,” the candidate said, “even though it might be the downfall of my career.”

Chisholm knew she was upsetting the status quo. She asked her party and her country to throw off the racist and sexist politics of the past and forge a new America.

As an alternative to the old politics that she sought to cast aside, Chisholm proposed an intersectional agenda based on multiracial urban and rural coalitions.

Against a crowd of white male contenders—some of whom shared her progressive politics, most of whom did not—Chisholm ran as the “Unbought and Unbossed” candidate. A militant foe of the war in Vietnam and a champion of the economic and social justice movements that had organized so effectively during the 1960s, she never minced words. As a co-convener of the National Women’s Political Caucus, she declared, “Women in this country must become revolutionaries. We must refuse to accept the old, the traditional roles and stereotypes.”

That kind of talk—along with her refusal to reject the endorsement of the Black Panthers—scared party leaders, media commentators, and liberal allies who fretted that Chisholm would siphon votes off from better-known anti-war candidates, such as Senator George McGovern of South Dakota and New York Mayor John Lindsay. They were not ready for a candidate who promised to “reshape our society,” and they afforded her few opportunities to prove herself.

“There is little place in the political scheme of things for an independent, creative personality, for a fighter,” Chisholm observed. “Anyone who takes that role must pay a price.”

Chisholm had to file a complaint with the Federal Communications Commission to win a place in a televised debate featuring McGovern and Senator Hubert Humphrey, the former vice president. Yet she remained undaunted, maintaining the dignity and determination that characterized a political career that saw her elected twice to the New York Assembly and seven times to the US House of Representatives.

While Chisholm won just one primary (New Jersey’s statewide preference vote in June), she outlasted better-known and better-financed contenders such as Senator Ed Muskie of Maine and Senator Henry “Scoop” Jackson of Washington. At the Democratic National Convention in Miami, she received 151 delegate votes—including that of a young Barbara Lee—and a measure of the respect she was often denied on the campaign trail.

Chisholm did not expect to win the presidency in 1972. But she did expect that her candidacy would have a lasting impact.

“I ran for the presidency, despite hopeless odds, to demonstrate the sheer will and refusal to accept the status quo,” Chisholm wrote in her 1973 book The Good Fight. “I ran because most people think the country is not ready for a Black candidate, not ready for a woman candidate.”

“The next time a woman runs, or a Black, or a Jew or anyone from a group that the country is ‘not ready’ to elect to its highest office, I believe that he or she will be taken seriously from the start,” she said. “I ran because somebody had to do it first.”

The Chisholm trail would be followed by others: by the Rev. Jesse Jackson Jr., for whom she campaigned in the 1980s; by Barack Obama, who was elected in 2008 as the first Black president, three years after Chisholm died; and by Kamala Harris, who four days before she was sworn in as vice president wrote, “Shirley Chisholm created a path for me and for so many others. Today, I’m thinking about her inspirational words: ‘I am, and always will be a catalyst for change.’”

When she represented California in the Senate, Harris was the sponsor of legislation that paralleled Yvette Clarke’s proposal to erect a Chisholm statute in the Capitol. My bet is that, as vice president, she will keep working to realize the vision she championed when Harris declared, “Shirley’s legacy is one that encourages us to keep up the fight for our most voiceless and vulnerable, and deserves to be cemented in the United States Capitol.”