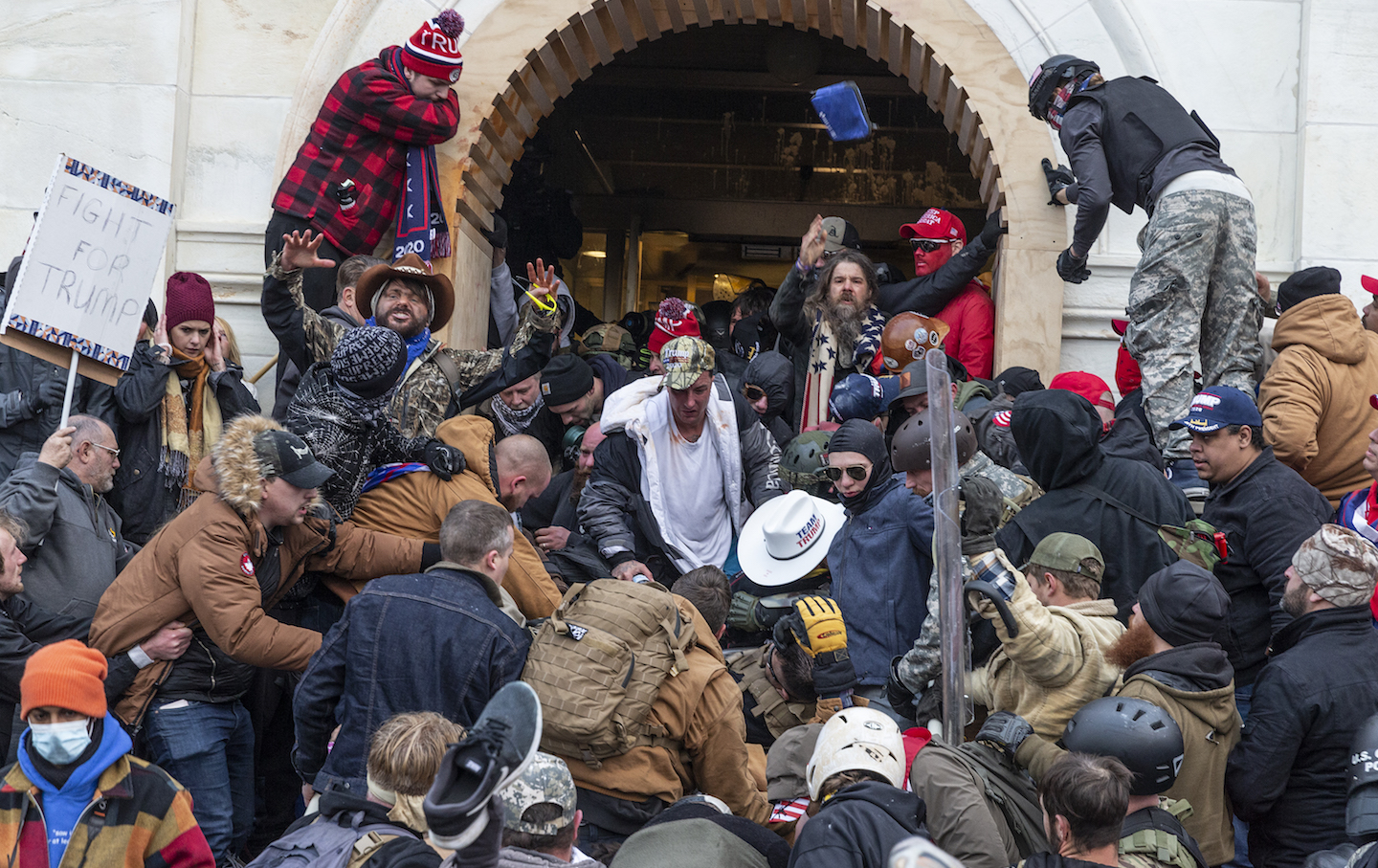 Rioters clash with police trying to enter Capitol building through the front doors. Rioters broke windows and breached the Capitol building in an attempt to overthrow the results of the 2020 election.

On the wall of his office in the Rayburn House Office Building, Representative Jamie Raskin has a framed poster that details the “Early Warning Signs of Fascism.” Based on research of the development of fascist regimes around the world by Laurence W. Britt, who wrote about the subject for the journal Free Inquiry, the list includes 14 items:

3. Identification of Enemies as a Unifying Cause

4. Supremacy of the Military

11. Disdain for Intellectuals and the Arts

12. Obsession with Crime and Punishment

Raskin and I have discussed the threat of fascism many times over the years, and it came up again this week when he and I spoke on the day he was leading the House effort to impeach President Trump. He explained how the memory of his late son, Tommy, as well as the support of family members, friends, and constituents, sustained him in the struggle to hold Trump to account for inciting a mob of his supporters to attack the Capitol on January 6. With that memory and that support, Raskin said, “I am fortified in the struggle against fascism.”

Many officials—Democrats and Republicans, liberals and conservatives—continue to resist using the “F” word when discussing the threat posed by Trump and his most extreme followers. But the January 6 attack led some of this country’s wisest public intellectuals and elected leaders to speak with necessary candor. House Rules Committee chair James McGovern, who was conducting the House proceedings as the mob stormed into the Capitol, said, “What I saw in front of me was basically homegrown fascism, out of control.”

Noting the overwhelming Republican support for Trump even after the assault on the Capitol, filmmaker and writer Bree Newsome observed:

The attack on the Capitol was not “anarchy,” it was FASCISM. Anarchy is a philosophical opposition to authority. The people who stormed the Capitol replaced the US flag with the Trump flag b/c they want a Trump dictatorship. The GOP is a fascist party.

“To all the Trump sycophants that followed in his footsteps, to all my Republican colleagues I say this: once the fascist genie has been let out of the bottle, he can’t be forced back in. Violent fascism at the footsteps of our national legislature was fed by Republicans and years of fomenting extremism against our government. They built this. This authoritarianism will not disappear in 14 days. I have been calling for accountability for four years. It cannot be ignored any longer. The long-term preservation of democracy is in our hands right now. It is the challenge of our time to eradicate this poison starting now.”

Wisconsin Attorney General Josh Kaul, his state’s chief law enforcement officer and one of the nation’s most ardent defenders of the US Constitution, was equally blunt in his response to the invasion of the US Capitol by supporters of defeated President Trump and the congressional Republicans who have adopted Trump’s antidemocratic agenda.

As the Trump mob stormed the Capitol, unleashing violence that would lead to death, destruction, and a brief interruption of the process of certifying the election of Joe Biden as the nation’s 46th president, Kaul said, “It’s difficult to believe what we’re seeing take place at the U.S. Capitol: a fascist riot incited by a lame-duck President desperately and illegitimately trying to cling to power based on absurd lies about the election that amount to voter fraud McCarthyism.”

“Those responsible must be held accountable for what appears to be a seditious conspiracy under federal law,” he said, adding, “Once Congress has fulfilled its duty of certifying the results of the presidential election, it should immediately begin proceedings to remove the president from office. Every day he remains in office is a threat to the republic.”

This week, at the urging of Jamie Raskin and his fellow impeachment managers, the House voted 232-197 to hold Trump to account. That was an appropriate response to the president’s incitement of insurrection—as was the recognition of that of the threat posed by what former Vice President Henry Wallace described as “American fascism.”