rzemyśl, oland—It is 10 hours by train from here to Gdánsk, six hours to Warsaw, four hours to Kraków. “Some of these people don’t even know where Gdánsk is,” Yulia volunteered, smoking outside the station here as streams of refugees wheeled their belongings up and down past her. Yulia is 30, an artist, Ukrainian by origin, and now living in Poland. “Warsaw is full. Kraków is full,” she said. Two hundred thousand Ukrainian refugees are now estimated to be in the capital, more than a tenth of Warsaw’s current population. 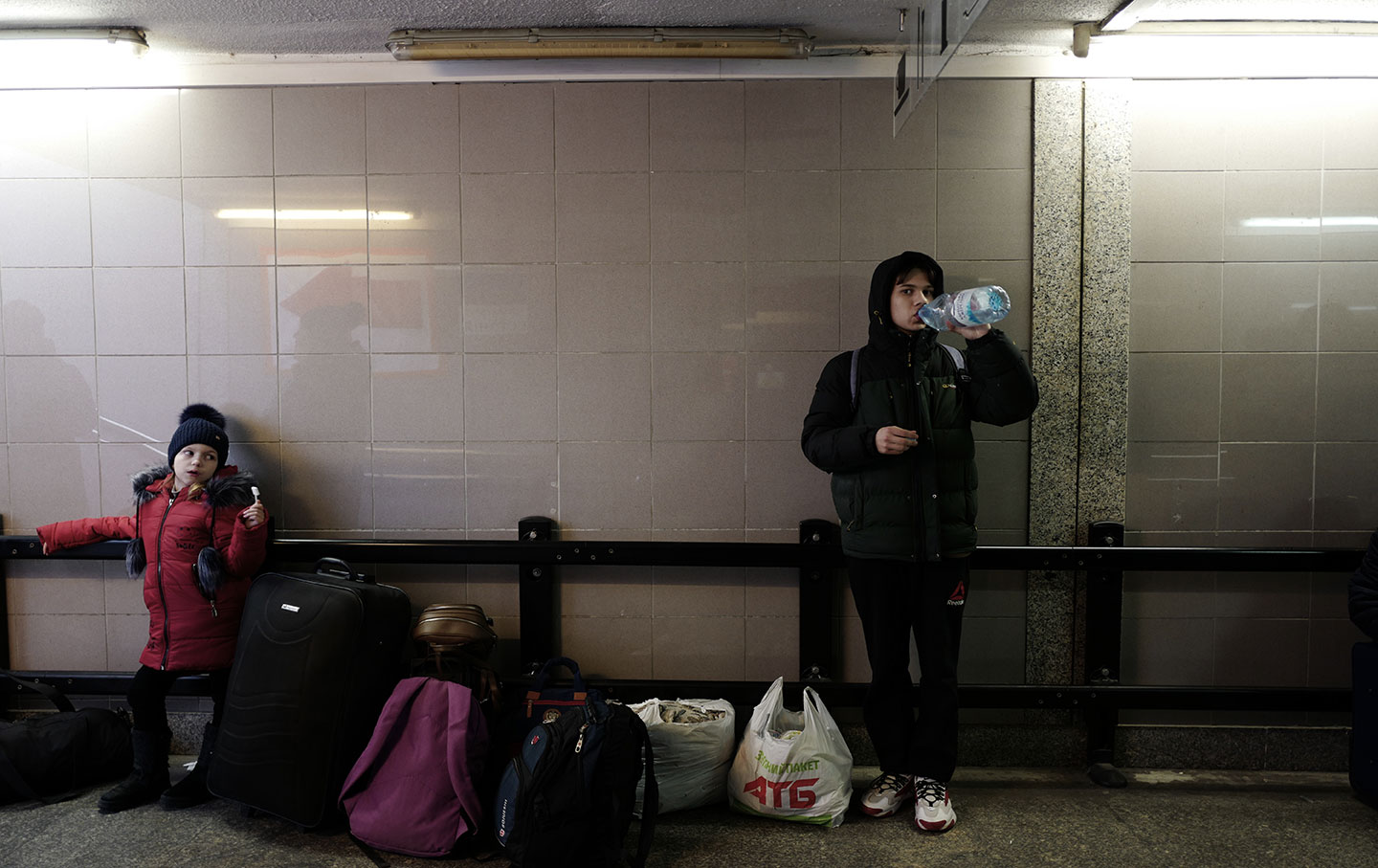 Yulia had come here from Warsaw a few days before as part of the great wave of support that had come to meet the people fleeing Putin’s war in Ukraine. “I host five people in my home. Mostly they are girls my age. Mostly they go to Poland and Spain,” she said. Some were going to Italy. “Europeans still don’t really understand it, this war. I hear from lots of Italian leftist friends of mine that this is the denationalization of Ukraine. I’m like, fuck you!” 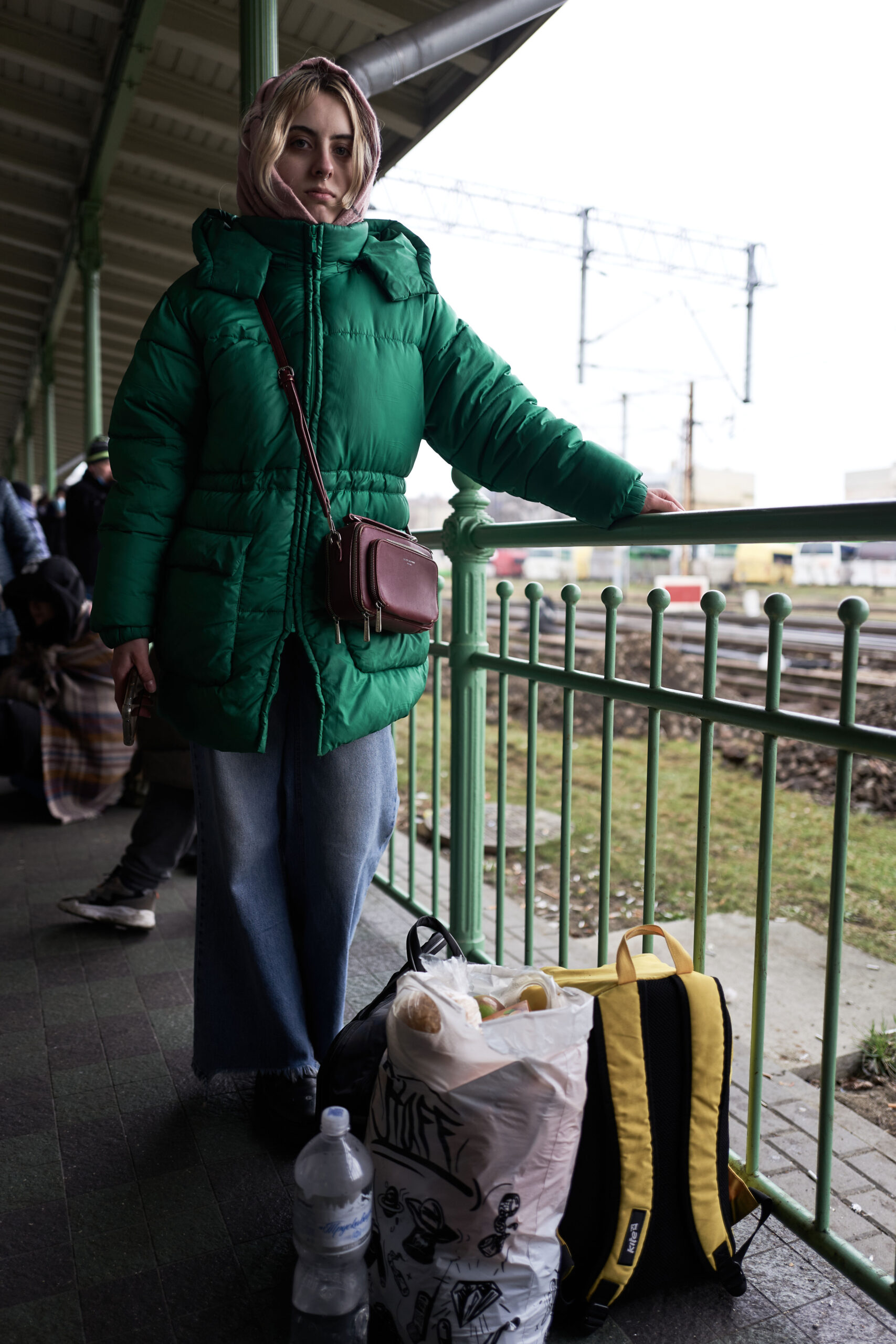 Nearby, overlooking the platform, Iryna Mirovshnychenko, 21, wearing a nose ring and a vibrant green puffer jacket, also leaned against a railing, smoking. She had been studying Dutch language and literature in Kyiv until Russian troops invaded the country. “I was scared because of the war, and I live in a dormitory,” she told me. “Some of the windows were shattered by bombs.”

Iryna is originally from Kramatorsk, a city in the country’s eastern Donbas region, which is claimed by Russian-backed separatists. When the war began on February 24, residents awoke to the sound of missiles thudding into city’s airport. “Our house there was crashed by a missile. Some balconies and windows were destroyed,” Iryna said. Her mother came to join her in Kyiv. “My father and the rest of my family is still there.”

As the war in Ukraine enters its third week, refugees continue to flee the country, 1.3 million of them to Poland; more than 2 million overall have left. Przemyśl has become a kind of ground zero for this refugee crisis—what Lesbos, Lampedusa, Gaziantep, and so many other places were to the refugee crises in Europe and the Middle East in the last few years. Already place names have taken on a totemic quality with the pan-European force of volunteers who have gathered here: “the Tesco” a welcome center for refugees in a former supermarket; Medyka, the border where it has taken up to 60 hours for convoys of fleeing people to escape; Korczowa Hala, the reception point just past another border. A Canadian pastor says he’s headed to the border to see what his congregation can do for the refugees. A Frenchman tells me he has booked an apartment for a month at Hrebenne, on the border, to host refugees. This border is a place where, one feels, a great many young Europeans will grow up very quickly. 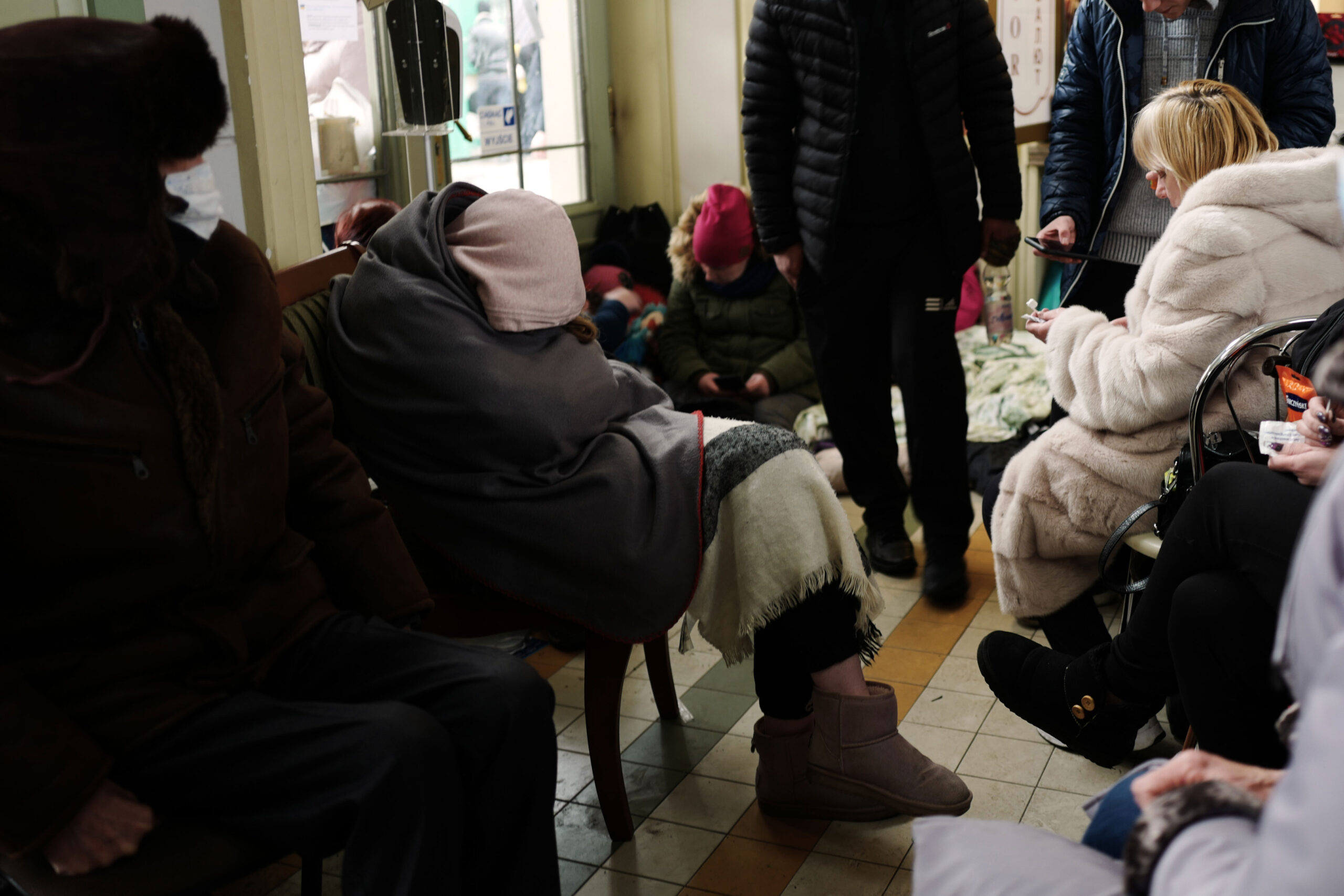 The journey is getting longer as more people flee and both Ukraine and Poland’s infrastructures creak under the weight of people heaving over the border. In rail stations in Ukraine, there are reports of overcrowded trains and stampedes. In Poland, volunteers whisper that women and children are being targeted by human traffickers. “It’s their specialty here,” mutters a Lebanese aid worker who has been at other camps, other crises around the world. “Normally, in other places, it would take several months for something like this to happen, but here it happened in 10 days. I almost got into a fight with someone over this today.” The hotels at the border are booked solid. In some places, volunteers and refugees vie for rooms.

But there are still not enough volunteers. That is at least what Teresa Popil, a 27-year-old from Lviv who until February 24 was an IT entrepreneur with aspirations of being a stylist, told me. Now she works with the International Headquarters for Assistance to Ukrainians, organizing five to six trucks a day headed into Ukraine. There, buses emblazoned with the insignia of German driving schools are unloaded onto Ukrainian trucks. Giant donated stuffed bears peer from fully loaded bus windows in a kind of suspended animation. There are not enough volunteers today to load them all effectively, but the team there will do their best. 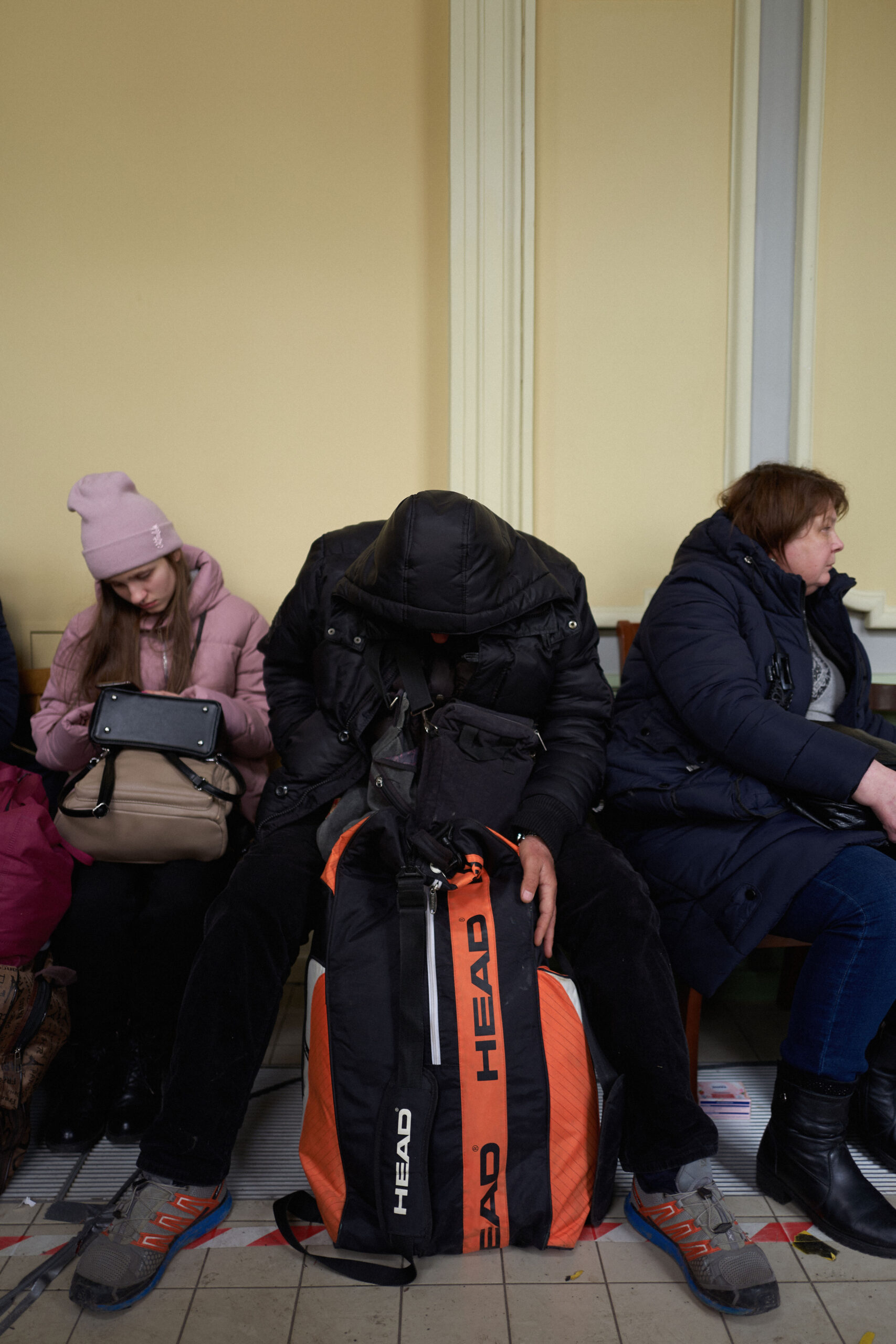 Teresa learned about the Russian invasion in Dubai, where she had traveled with the Ukrainian delegation for Expo 2020. “We were just thinking about our families, sitting in the lobby of the hotel,” she said. “The only question was how to get home. The skies were closed. Staying in Dubai, that would have been OK, but, no, because our families are at home.”

The members of her delegation made their way back—“Romania, Slovenia, then Warsaw and train to Warsaw”—a friend of Teresa’s told her about the work they were doing in Przemyśl, so she headed there. “I was thinking what to do? You just start calling, texting. How can I help? First, you feel yourself terribly useless because you can grab an AK-47, yeah, but it will change nothing,” she explained. “I think all volunteers, they just want to make something using their time and experience. And that’s all.”

Teresa marveled at how organized the border was: Already in the first few days after the beginning of the war, there were reception centers for refugees, and ordinary Poles, many of whom feel a strong connection to Ukrainians, turned out in droves to help, opening their apartments and businesses to people fleeing. Poland has allocated 8 billion złoty (around $1.8 billion) to the refugee efforts, although the country’s infrastructure is strained to capacity. 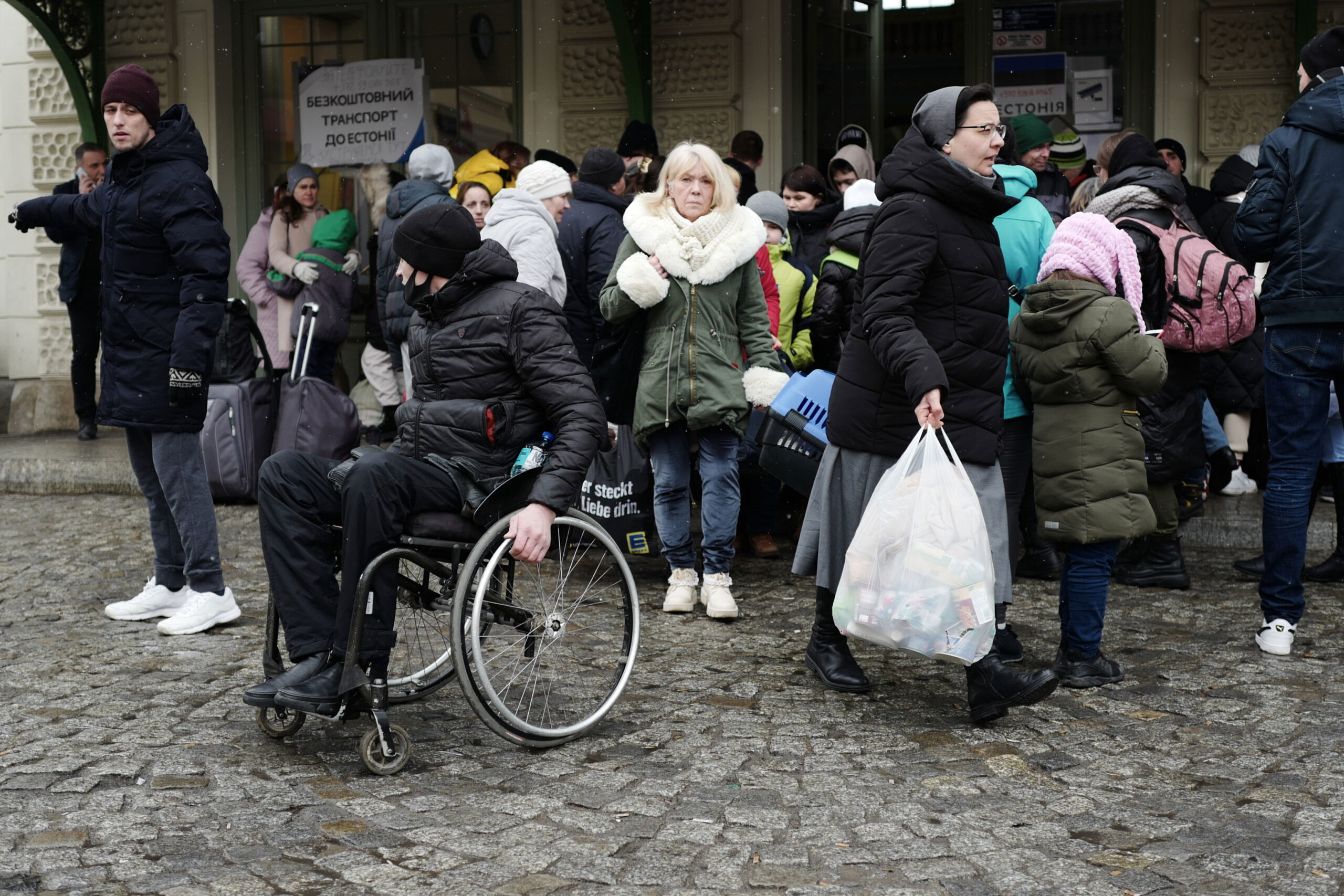 Teresa heard of a logistics center that a Ukrainian living in Poland had offered to set up to help get humanitarian aid and aid for the military into the country, and she signed up. Now she organizes five to six trucks a day headed into Ukraine. She hasn’t slept in 30 hours.

“You are a perfect man, you know that? Thank you,” Teresa says, striding through the logistics centre, which is just outside Przemyśl, kitted out in beige boots and tracksuit (“They call me the mushroom girl, because people in Poland go into the woods to collect mushrooms in outfits like this”). The man she has just complimented is in his 60s and has driven here in a camper van from the north of Sweden. He heaves boxes into one of the trucks that will be departing in a few hours, and doesn’t give his name. “I haven’t told my children I am here,” he says.

Already, volunteers are collecting refugees who want to be transported in minibuses and taking them elsewhere in Europe. A French delegation was filling a minibus to head to Marseilles—their initiative is associated with Corridor Citoyen, “Citizen Corridor,” which is ferrying people to France. French authorities said yesterday that 5,000 Ukrainians had already entered France, and that they would launch a sponsorship program to help them. The French interior minister accused British authorities of a “lack of humanity” because they had turned refugees back at the Calais crossing. (The British home secretary announced that the UK government was easing restrictions on Ukrainians on Thursday.) It’s worth noting that this has been a markedly different reception from that Syrian and African refugees crossing in Greece and in Italy have received—a fact not lost of the French far-right presidential candidate and erstwhile Putin supporter Eric Zemmour. He declared the other day that Ukrainians could stay in France, but that he would not welcome Arabs. “There are people who are like us and people who unlike us,” he said. “Everybody now understands that Arab or Muslim immigrants are too unlike us and that it is harder and harder to integrate them.”

On Tuesday, another rightist former Putin fan, this time from Italy, came to show support for the Ukrainian refugees at the Przemśyl station. Matteo Salvini, of the far-right Northern League Party arrived at a press conference outside the late-19th-century building—where he was presented with a T-shirt that read “Army of Russia” by Przemśyl Mayor Wojciech Bakun. Salvini had mugged for photos in Red Square wearing the shirt back in 2014. The Italian politician, visibly embarrassed, tried to interrupt before exiting stage right, refusing calls from the assembled reporters to denounce Putin. 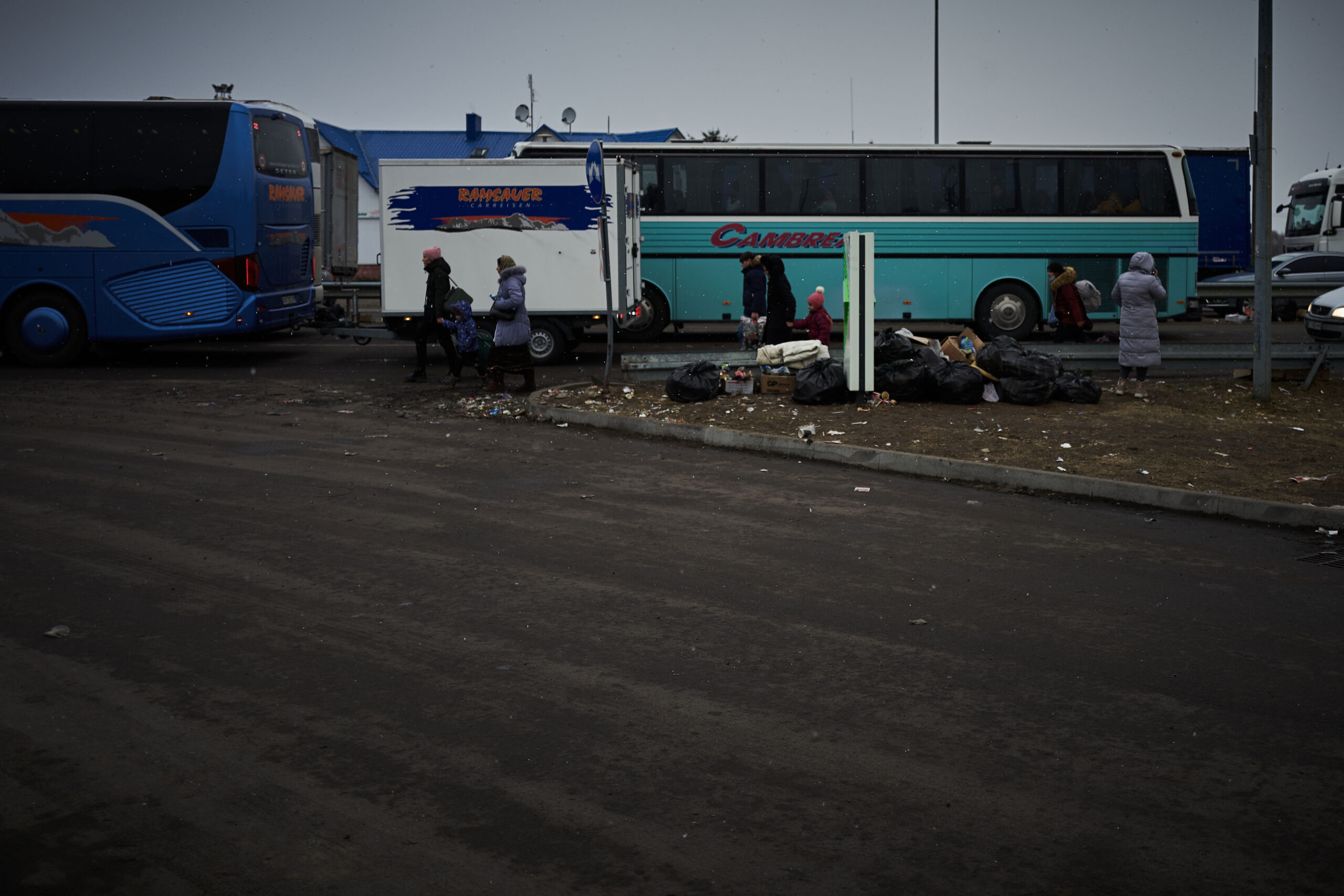 But still the refugees keep coming, the scene at the station more reminiscent of the era in which the station was built, with shivering women in patterned headscarves sitting on the floor, warming themselves over mugs of coffee, and bustling nuns trying to guide children to safety. Many of the refugees are women and children, because men between 18 and 60 must stay to be conscripted in Ukraine.

Amid the chaos of the station, however, there hangs a shimmering something, the future of Europe perhaps, which will change with these people coming to live there, hope etched alongside exhaustion on their faces. Whether they knew where they were headed (Sasha Lubynetskaya, 30, from Poltava, who was with her 7-month-old child: “We are headed to Wrocław, and we will return after the war”) or not (Volodymyr Ivanov, with his family: “We have no idea where we are going”), they will be part of a gigantic change that is now being wrought on the continent.

Iryna, the student of Dutch language and literature, decided to flee Kyiv the day before by train. Everyone in her dorm had decided to leave, so she followed suit. She waited for eight hours at Kyiv train station, then took an eight-hour train to Lviv. “We got to Lviv at 1 am, after curfew”—Ukrainian forces have instituted a curfew to curb the chance of sabotage—“and we had to wait for volunteers to take us to shared apartments. It was terrifying.” Iryna is now waiting in Poland for a Dutch friend of hers to come and collect her, her mother, and her friend Sibel. “I will wait there in the Netherlands until the war is over,” she said. She wants to get her master’s degree in Ukraine, but she’s worried she won’t be able to finish her studies soon. “I’m afraid that the war will last, because every day the situation gets worse.”