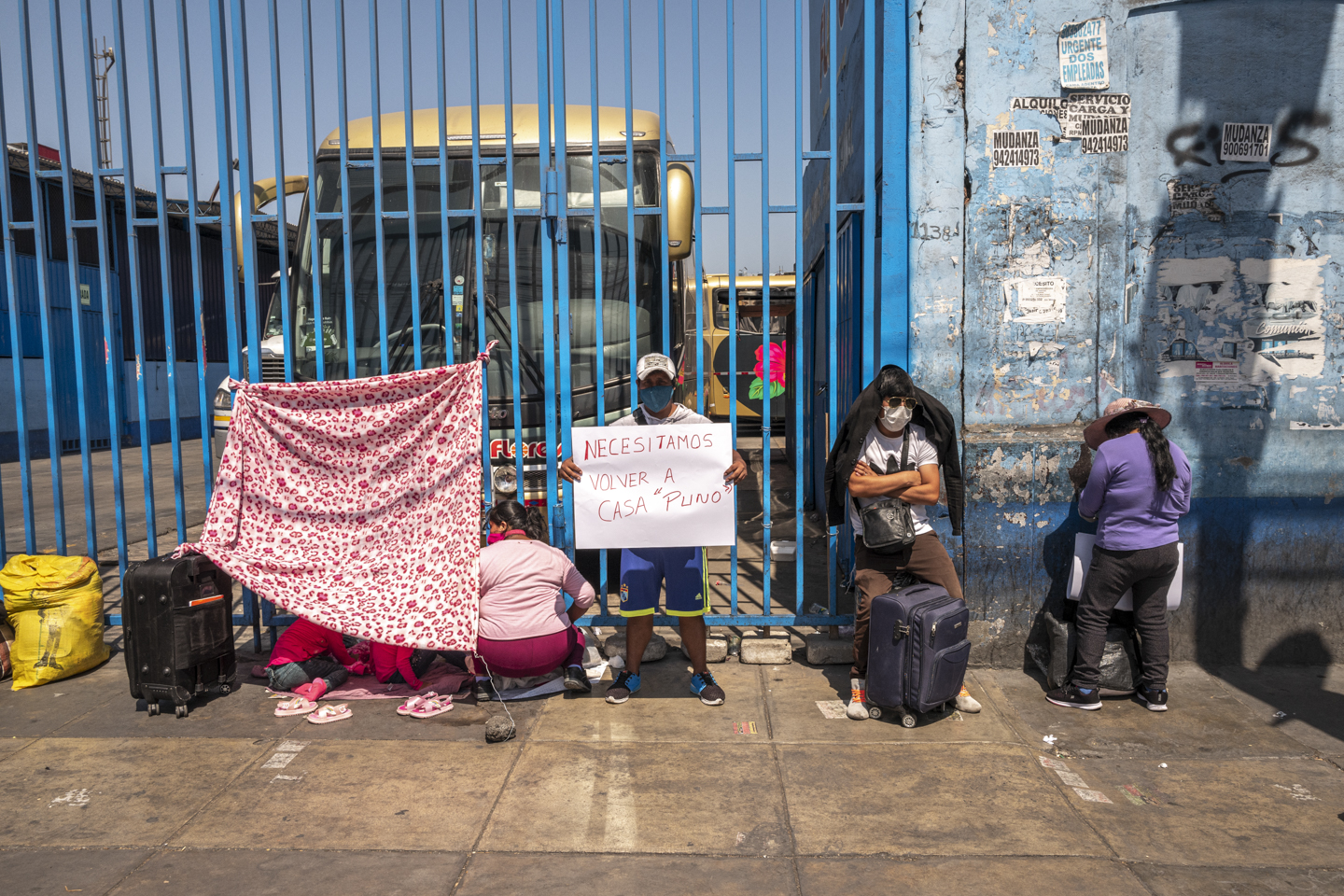 A group of people wanting to travel to Juliaca, near the border with Bolivia, have been waiting for a week already. (Musuk Nolte)

The Nation and Magnum Foundation are partnering on a visual chronicle of untold stories as the coronavirus continues to spread across the United States and the rest of the world—read more from The Invisible Front Line. —The Editors

Lima, Peru—In Peru’s capital city, an exodus is underway. Outside bus terminals and in makeshift encampments on the sides of roads, thousands of people are struggling to get out. The coronavirus pandemic and the ensuing shutdown of the country’s economy is bringing about a radical reversal of long-standing migration patterns, and revealing the flaws in the government’s response to the crisis.

Lima is a city of migrants: The country’s largest city has for decades lured migrants from Peru’s peripheries, people looking to earn a living they couldn’t obtain in their home region. From a little over 1,000,000 residents in the 1950s, the city has rapidly expanded to more than 10 million today. Many of the new arrivals live in crowded, improvised housing, and earn their money day-to-day. When the pandemic made it impossible to continue working, many people couldn’t afford to remain in the city even if they wanted to. So they are taking to the roads. 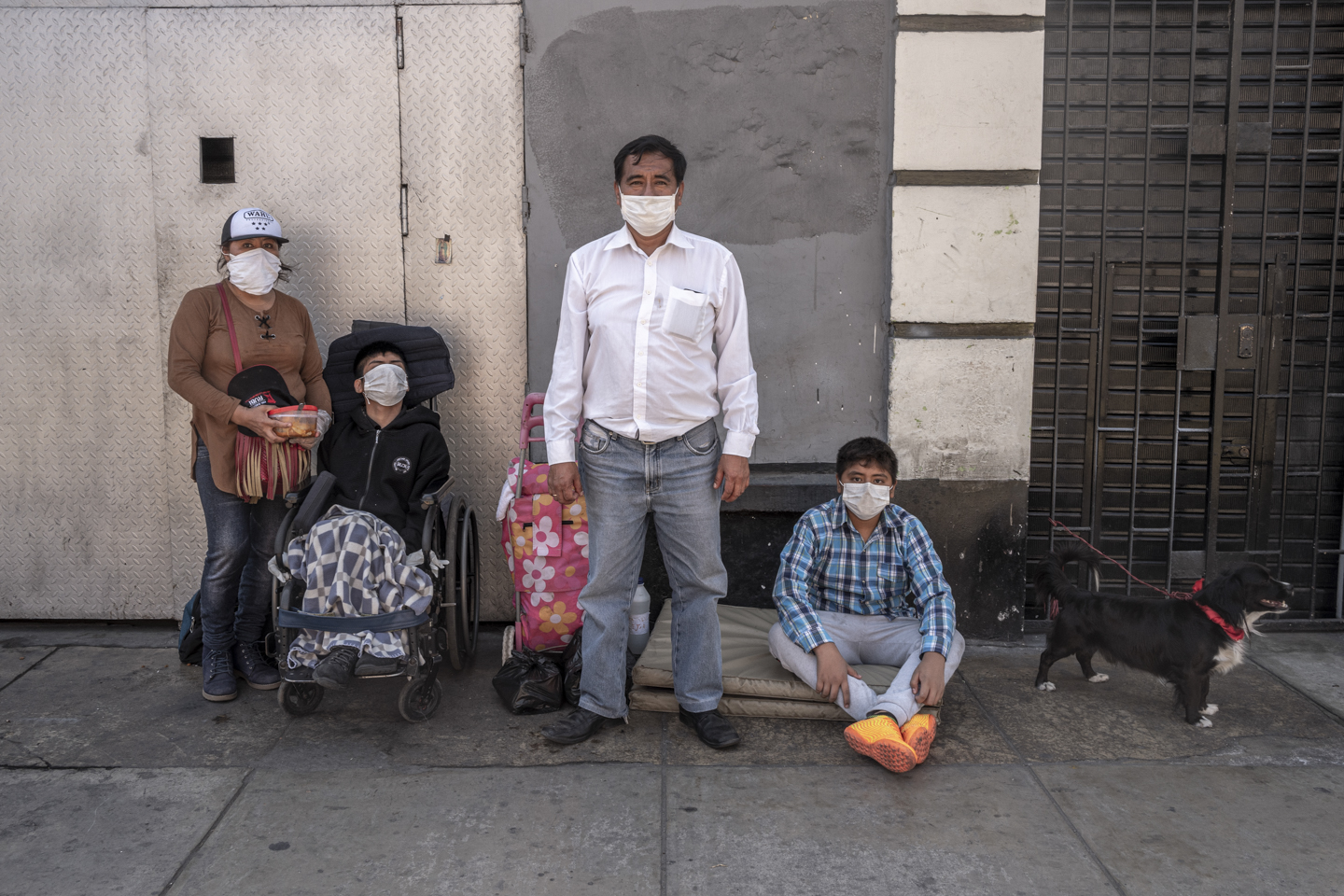 The Juarez family came to Lima to treat their oldest son, who suffers from cerebral palsy. They stayed in Lima as long as the money would allow them, but since they no longer had the means to pay for lodging they had to look for a way to return. After two days on the streets, they managed to get on a bus that would take them to the province of Piura. Unfortunately, the pet they were carrying could not be taken and they had to leave it. (Musuk Nolte) 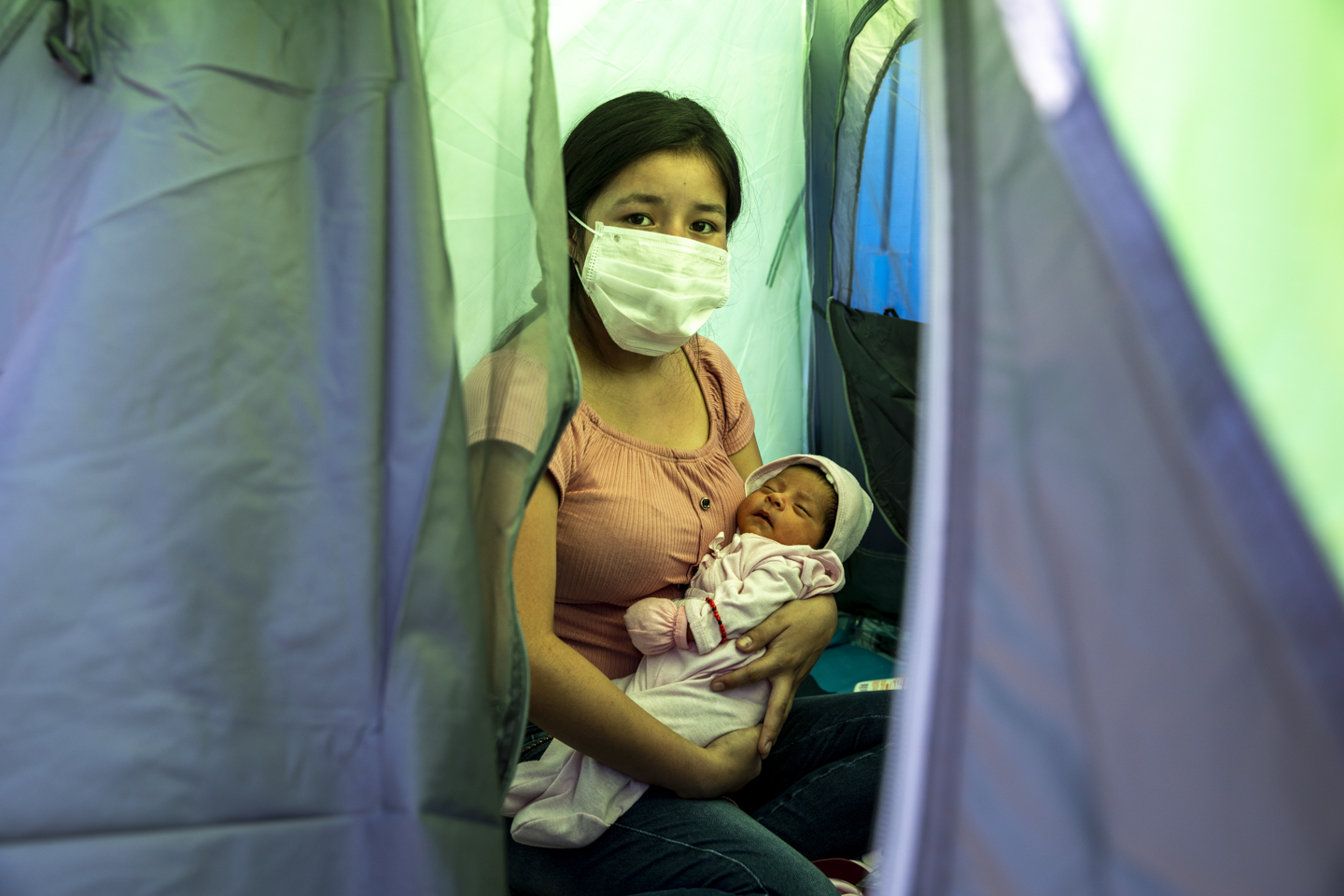 A large number of Peruvians who came to study or work in Lima have been evicted from their rooms and fired from their jobs. They were able to endure the first weeks of quarantine, but the situation has forced them to seek ways to return to their home towns. This is the case for Maria Isabel Llamanjo, who gave birth 20 days ago to a girl who still has no name. Yesterday, April 28, she and her partner were able to get a seat on a bus that would take them to Piura, where they can then look for a way to get to Pacaipampa. (Musuk Nolte)

“We’re more afraid of hunger than the virus,” Wilson Granda told me, as he was waiting with 10 of his relatives for a bus to Ayabaca in the north of Peru, more than 30 hours away. Regional governments are working to provide transportation for those who want to return to their hometowns, but the scale of the reverse migration is daunting: More than 170,000 people have registered with the government for bus transportation home, and that’s only those who have registered. That has left people like Granda to wait, sometimes days at a time, before their spot on a bus opens up.

Before the pandemic hit Peru, I had been working with native communities in the Amazon for some years, and the last trip I was able to make, in February, before the internal borders were closed was to work in the highlands jungle on a project about the threats facing Ashaninka communities in one of the country’s coca-producing regions. Drug trafficking, depopulation, and illegal logging had plagued these communities for years, doing their own part to spur migration to the cities. Now, many who left are returning. 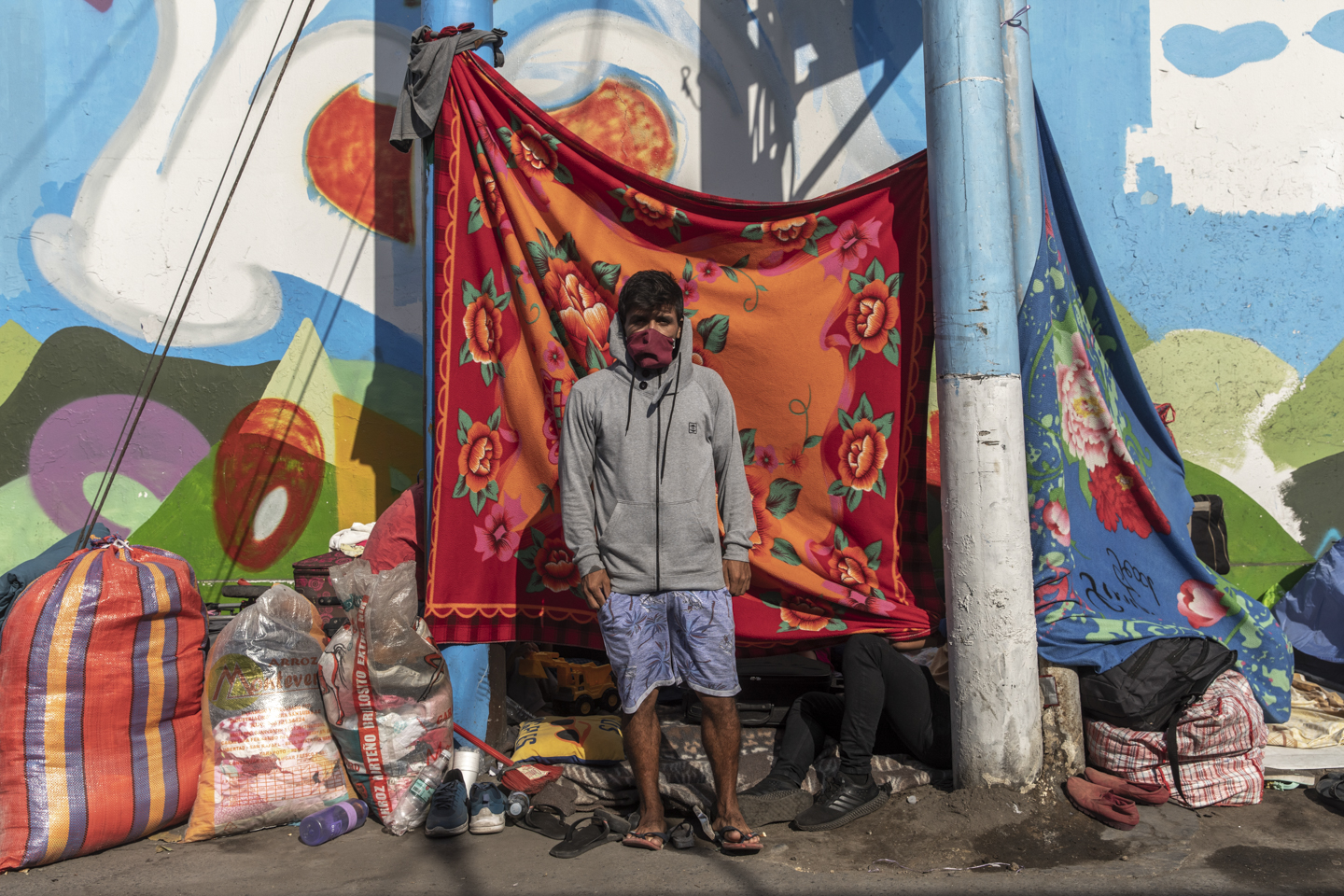 Wilson Granda, 28, is with 10 relatives, including his two children of 2 months and 2 years. They’re trying to travel to the province of Ayabaca in Piura. (Musuk Nolte) 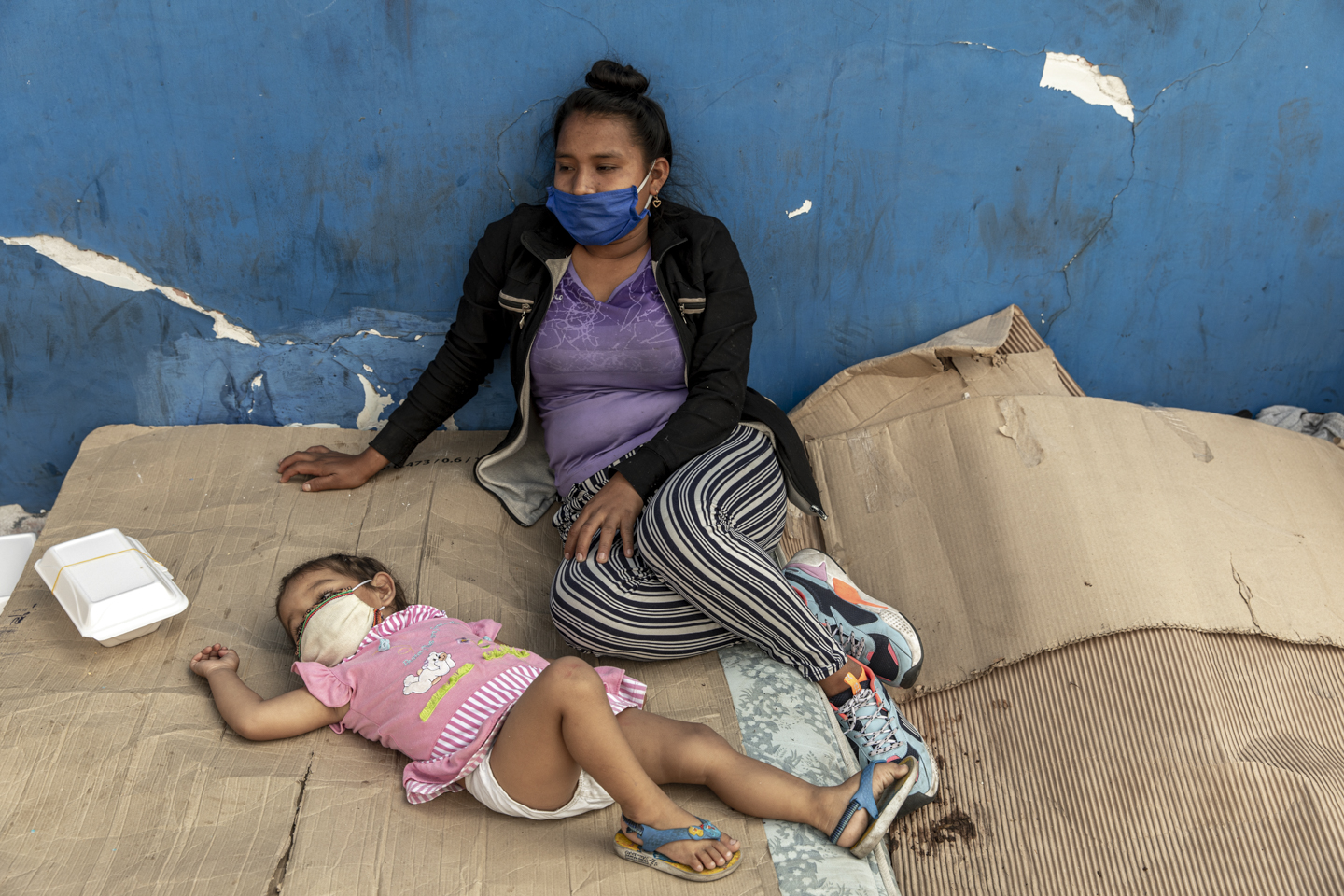 Nina Chapian and her little sister Petit are traveling to Tarapoto with their parents. They have been sleeping for 15 days in different parts of the city waiting for a seat on a bus to take them to their village. (Musuk Nolte) 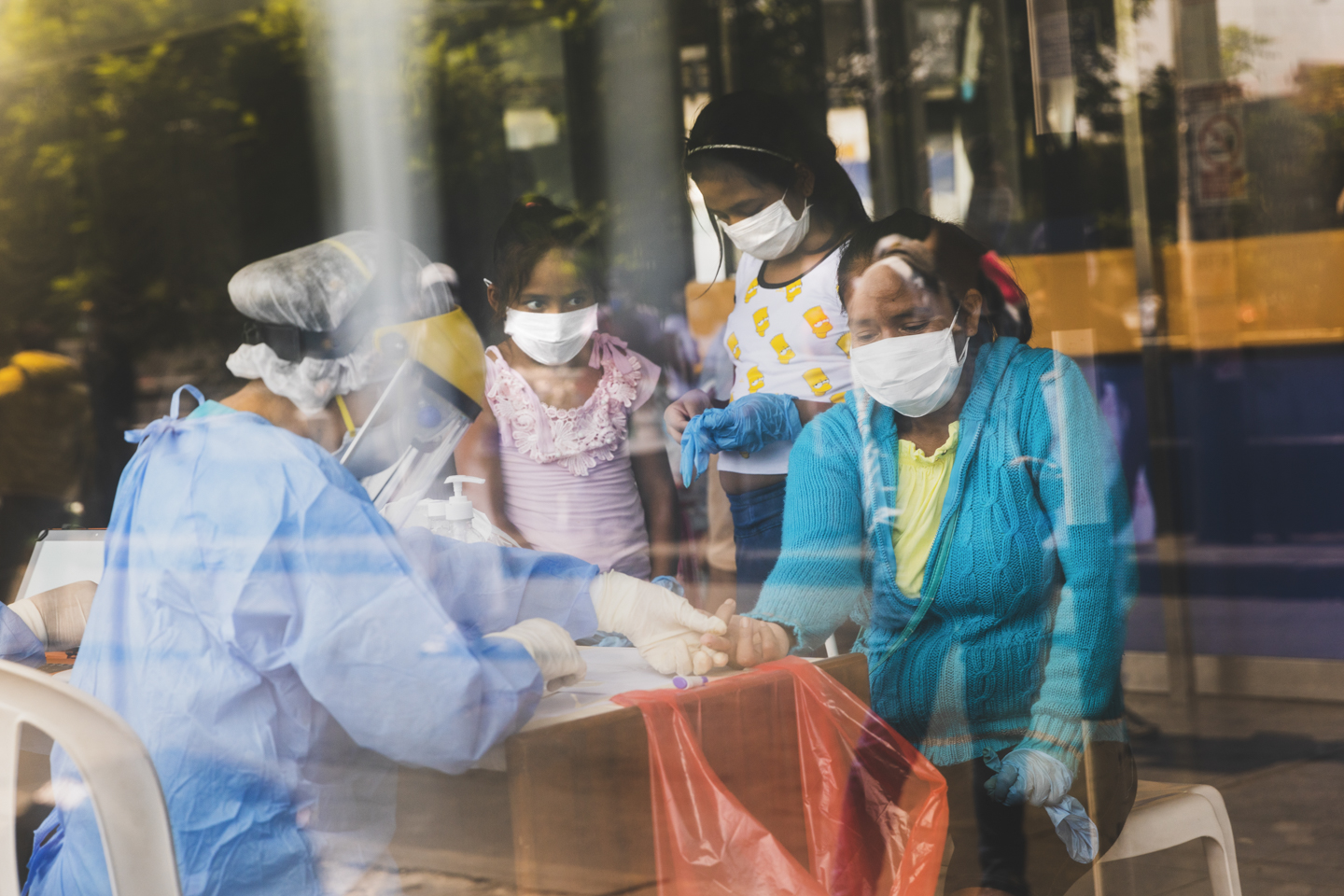 Inside a bus terminal in Lima, the government has arranged to test all passengers before they board a bus. While I was that the terminal, four people tested positive for Covid-19 and were transported to a shelter. (Musuk Nolte)

When Peru went under lockdown, many native communities closed their borders too, but that didn’t stop the virus from making its way into some communities in the Amazon and the Andes. Among the people I spoke with on the streets of Lima, many are from the Amazon regions of Loreto and Piura, on the northern coast of Peru. The situation is changing quickly, but these remote communities are on high alert, many of them days away from a hospital. Many of the people now leaving Lima are on their way to these communities, and the risk now is that they may carry the virus with them. 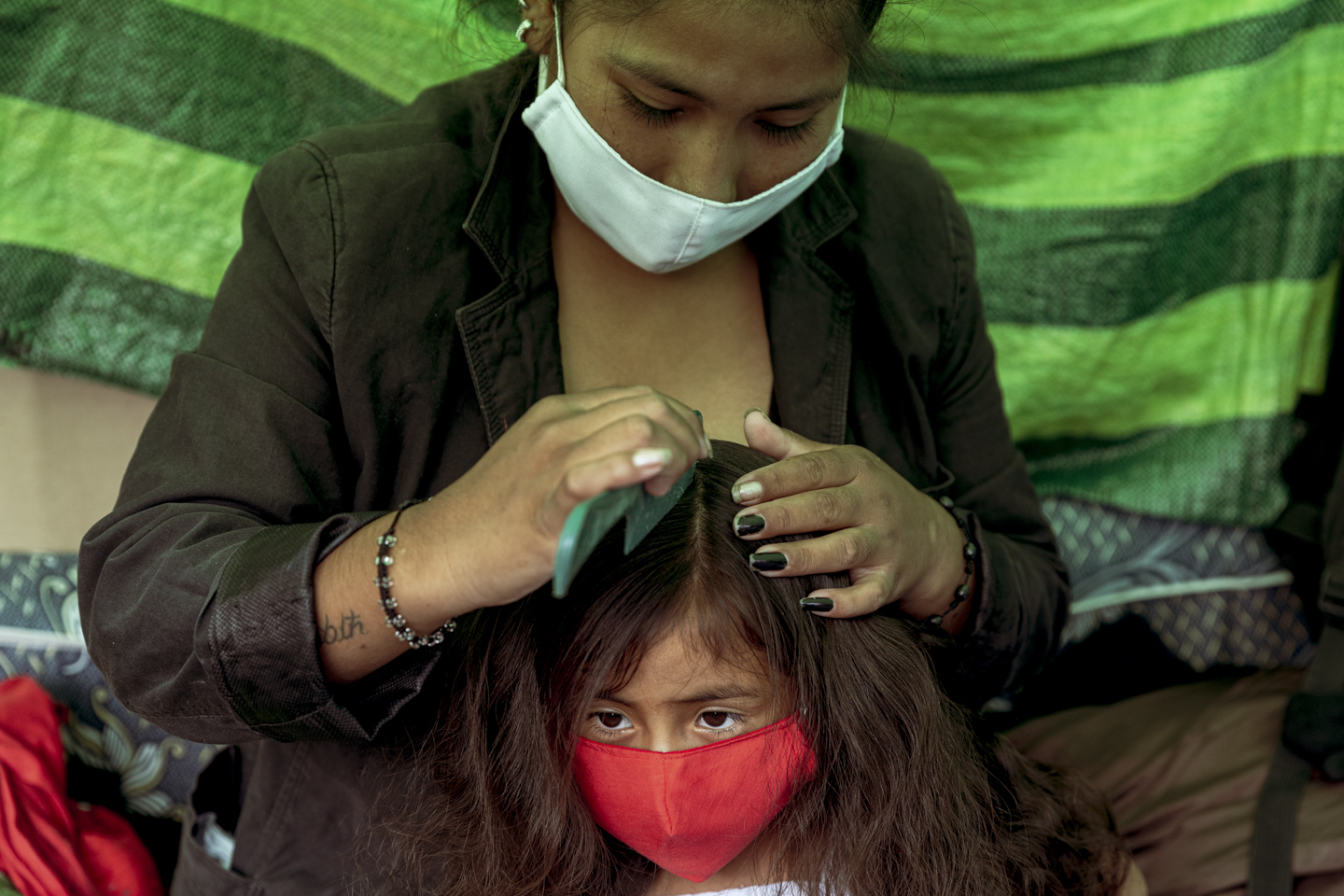 Lizbeth brushes her cousin Maryori’s hair in a makeshift tent outside a bus station. They traveled with Maryori’s mother and sister to Lima for ear surgery, which could not be done because their appointment coincided with the first day of the state of emergency. It will take more than 30 hours to reach their village in the jungle of Puno, almost on the border with Bolivia. (Musuk Nolte)

Something that I heard a few times was, “At least there we have a farm, in Lima you can’t plant,” and perhaps this will be one lasting change from this crisis, a revaluing of jobs that are really fundamental for our existence. But first, these people have to get home. 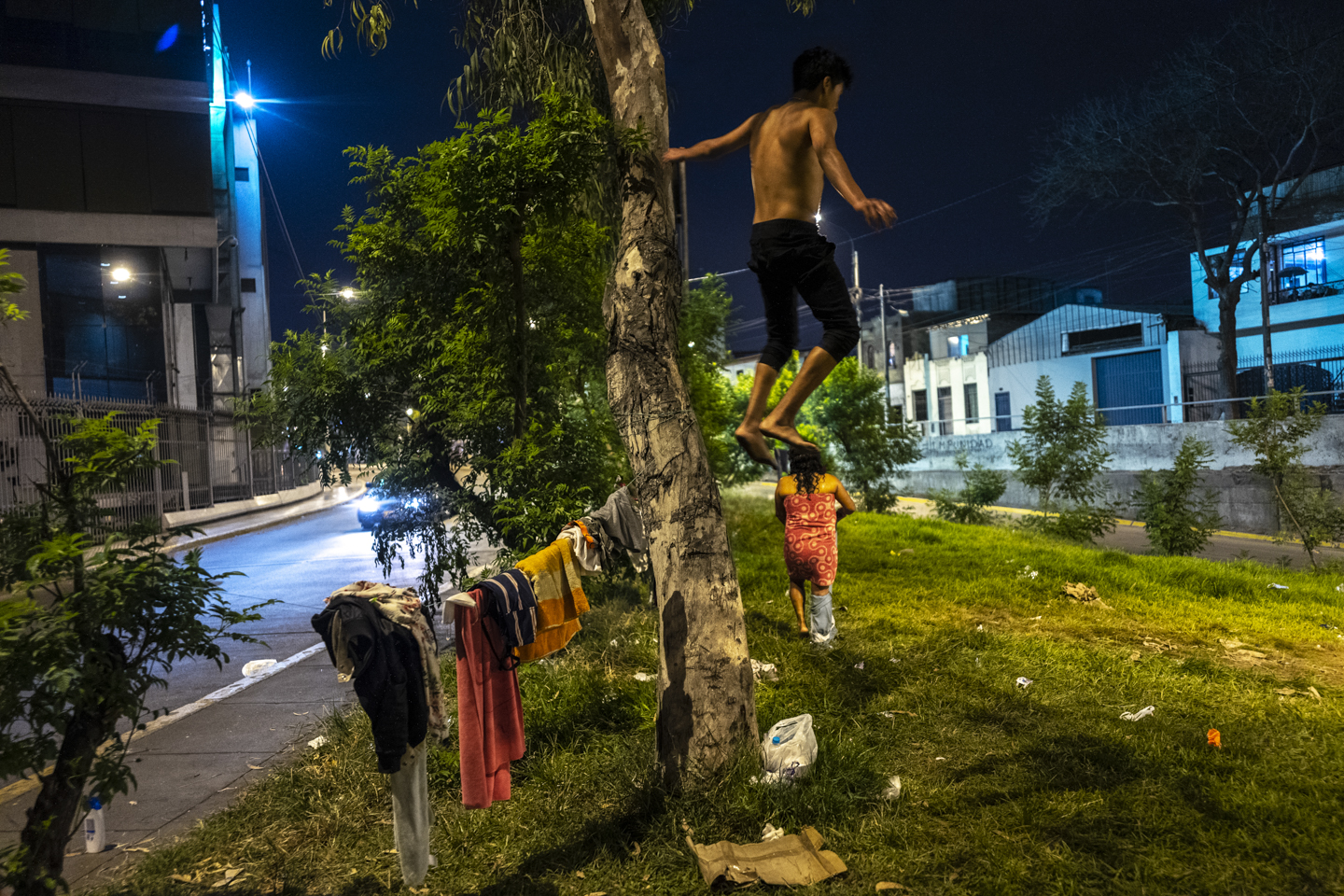 Cristian Gonzales is with his two younger sisters and his mother. They have been waiting for a week to travel to Tarapoto, a city in the jungle. In the meantime, they spend their days looking for some way to entertain themselves, here playing in the gardens in the median of one of Lima’s main highways. (Musuk Nolte) 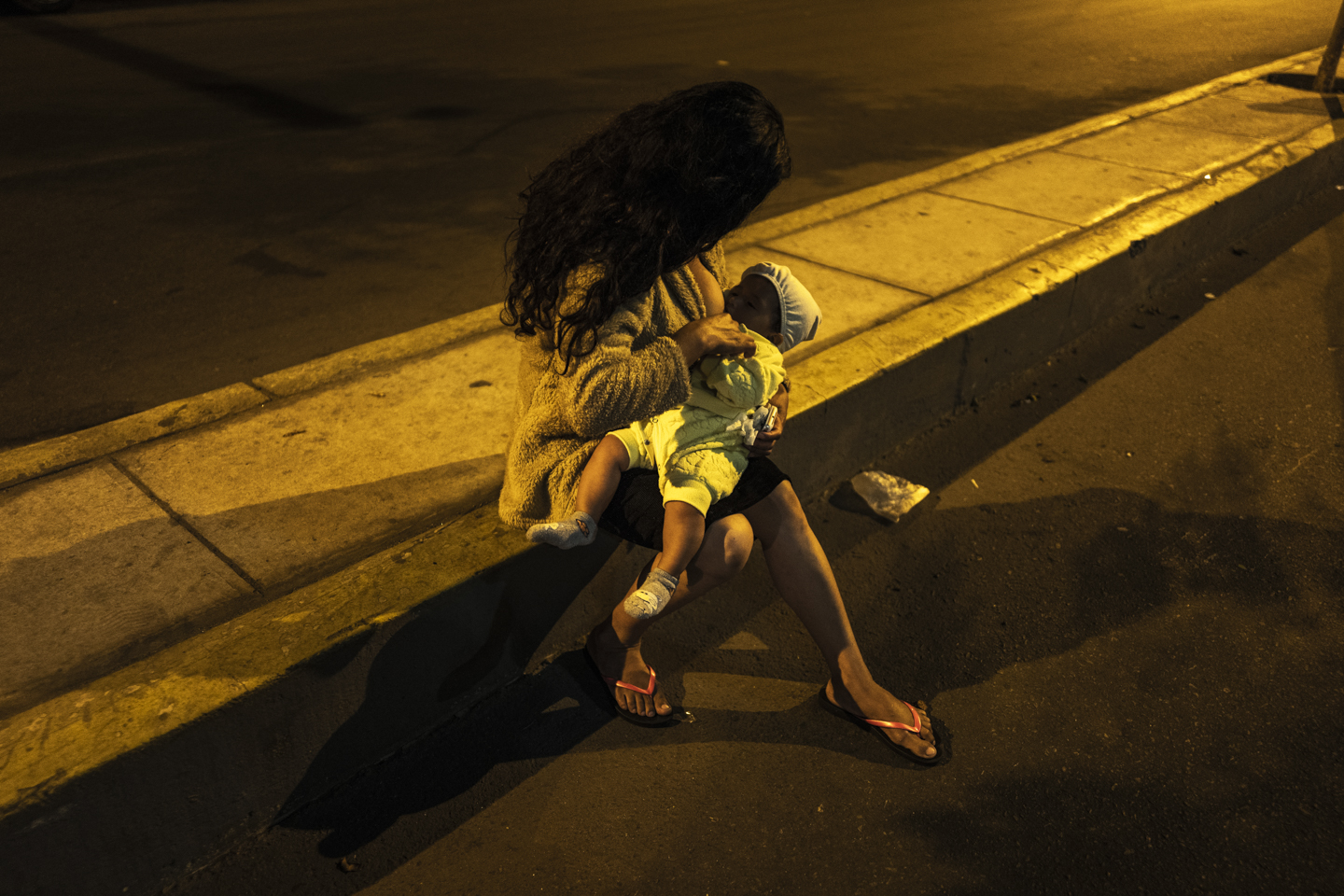 Lastenia Huayama breastfeeds her baby Brittany. Lastenia has been waiting for 15 days with Brittany and her son Christopher in different areas of the city, looking for a place in a bus to return to the Amazon city of Tarapoto. (Musuk Nolte) 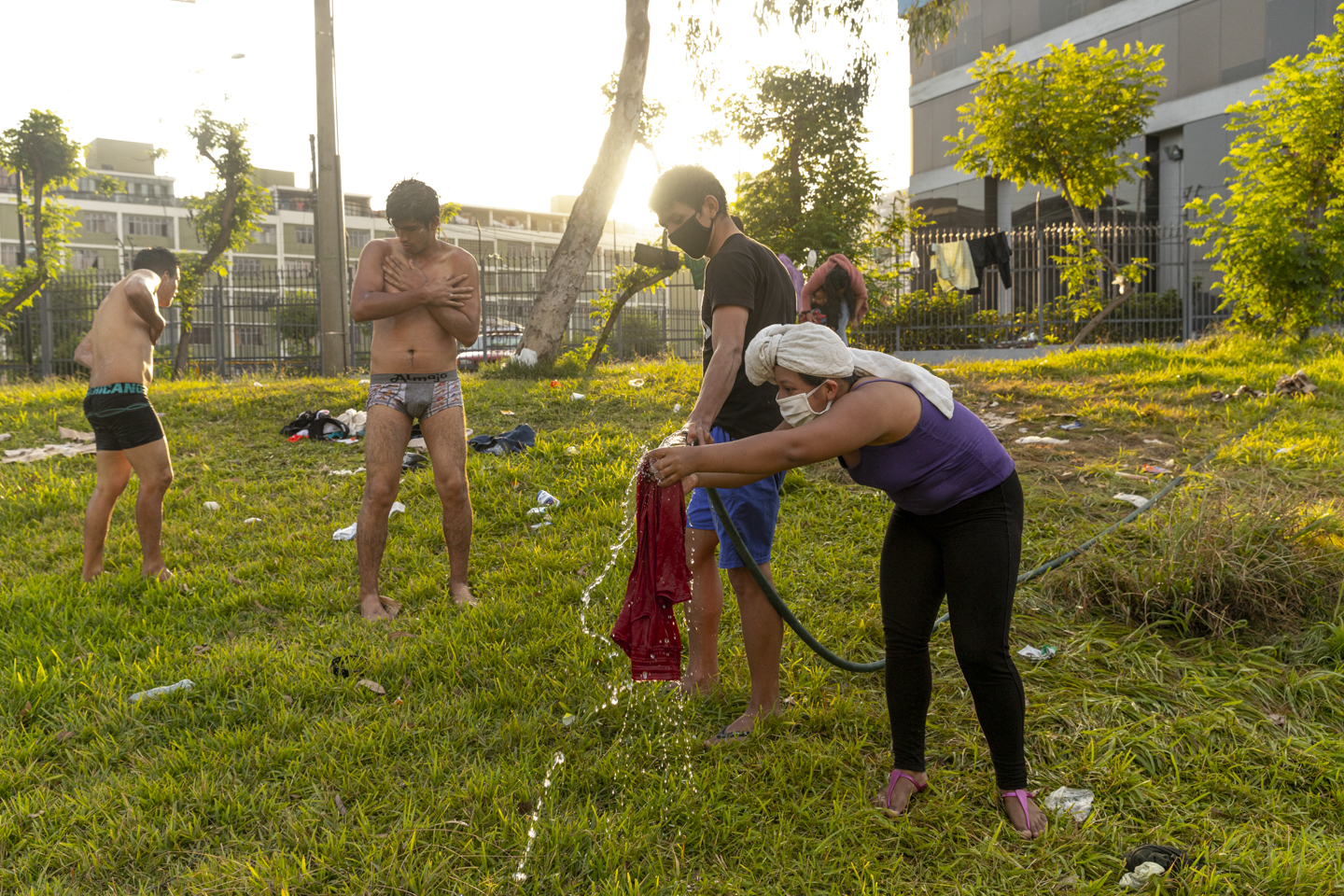 A group of people use a watering hose to bathe and wash their clothes. (Musuk Nolte)

“We’ve been waiting for more than 15 days and we need to go back,” Richard Pangoa told me, as he and his wife and three little girls were walking in the direction of Pucallpa in the north jungle of Peru, more than 400 miles away. “We can’t keep sleeping in the streets. We’ll just walk.”

Richard Pangoa and his family have been in a temporary shelter for four days waiting to be transferred to their village in the Amazon province of Pucallpa. Finding no way out, they have started walking. (Musuk Nolte)