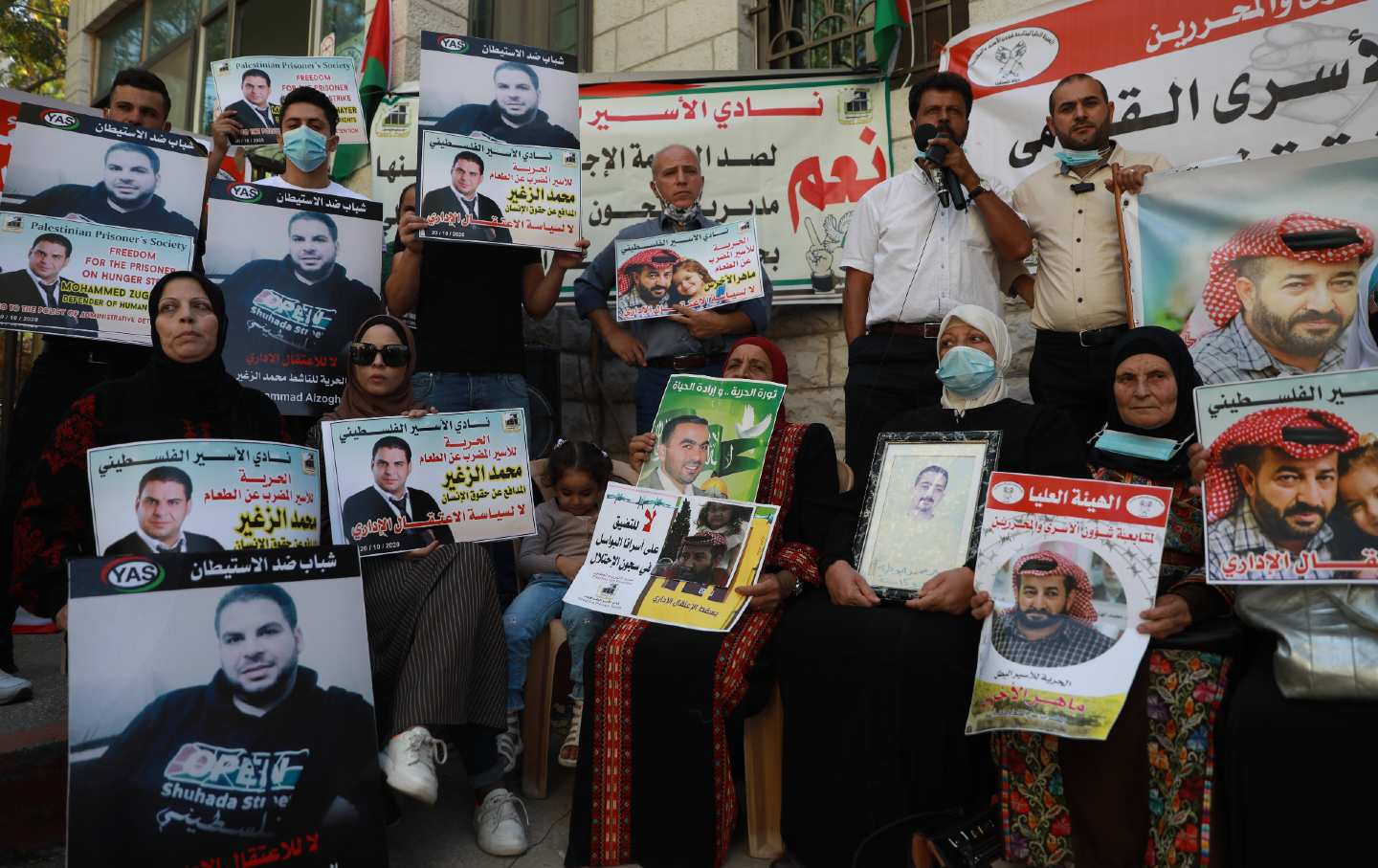 People gather to support Maher al-Akhras, a Palestinian prisoner in Israeli jail who is on a hunger strike, in Al-Bireh, West Bank, on October 27, 2020. (Issam Rimawi / Anadolu Agency via Getty Images)

Under the cover of chaos from the coronavirus crisis, Palestinian Maher Al-Akhras is on the brink of death in an Israeli hospital, on hunger strike to protest his administrative detention in Israeli prison.

Would you like to know why he’s in prison? So would he. In fact, he decided to give the Israeli Security Agency (Shabak) and military a choice: his freedom, or his death.

Maher al-Akhras, a 49-year-old father of six from the Palestinian village of Silat a-Dhahr in the occupied West Bank, started his hunger strike on the day he was detained: July 27. With no formal charge against him, Al-Akhras appealed to Israel’s supreme court for his release. On September 23, his detention was suspended by the court on the grounds that his deteriorating health rendered him no longer a threat. This allowed Al-Akras to finally see his wife and children and receive visitors. But last Friday, though still in critical condition, the Shabak and the IDF ordered him moved back to prison health facilities; this decision was later revoked following an emergency appeal, and his arrest remains suspended as long as his health does not improve.

Maher’s torment represents one extreme of a spectrum of imprisonment and lack of control that all Palestinians experience. Millions of Palestinians have been in refugee camps since the Nakba, without citizenship or a state. Other millions of Palestinains are currently being held captive in the “world’s largest open prison” in Gaza, or under a military regime in the West Bank. Then there are the Palestinian citizens of Israel, like me, who suffer from a different type of imprisonment—discrimination in looking for a job or finding an apartment, police violence, the possibility of displacement (as under the Trump “peace” plan), and a culture that constantly treats you as an unwanted guest in your own home. Nearly every Palestinian family has a member that is currently imprisoned or was in the past. We grow up expecting prison to be a part of our lifeline somehow.

With subordination coming at us from every angle, a hunger strike offers a rare opportunity to take back control. It is a paradoxical move, asserting the essence of your freedom by denying your oppressor control over your body. The prisoner resists measures meant to keep him alive in order to force his oppressors to choose: either grant my freedom, or bear the responsibility for my death. Most of the time, the death of a single Palestinian prisoner does not show up on the radar screen of Israeli or world consciousness. Maher Al-Akhras is using hunger to demand that change, that his life must mean something. Charged without cause, he is risking his life for a very clear one.