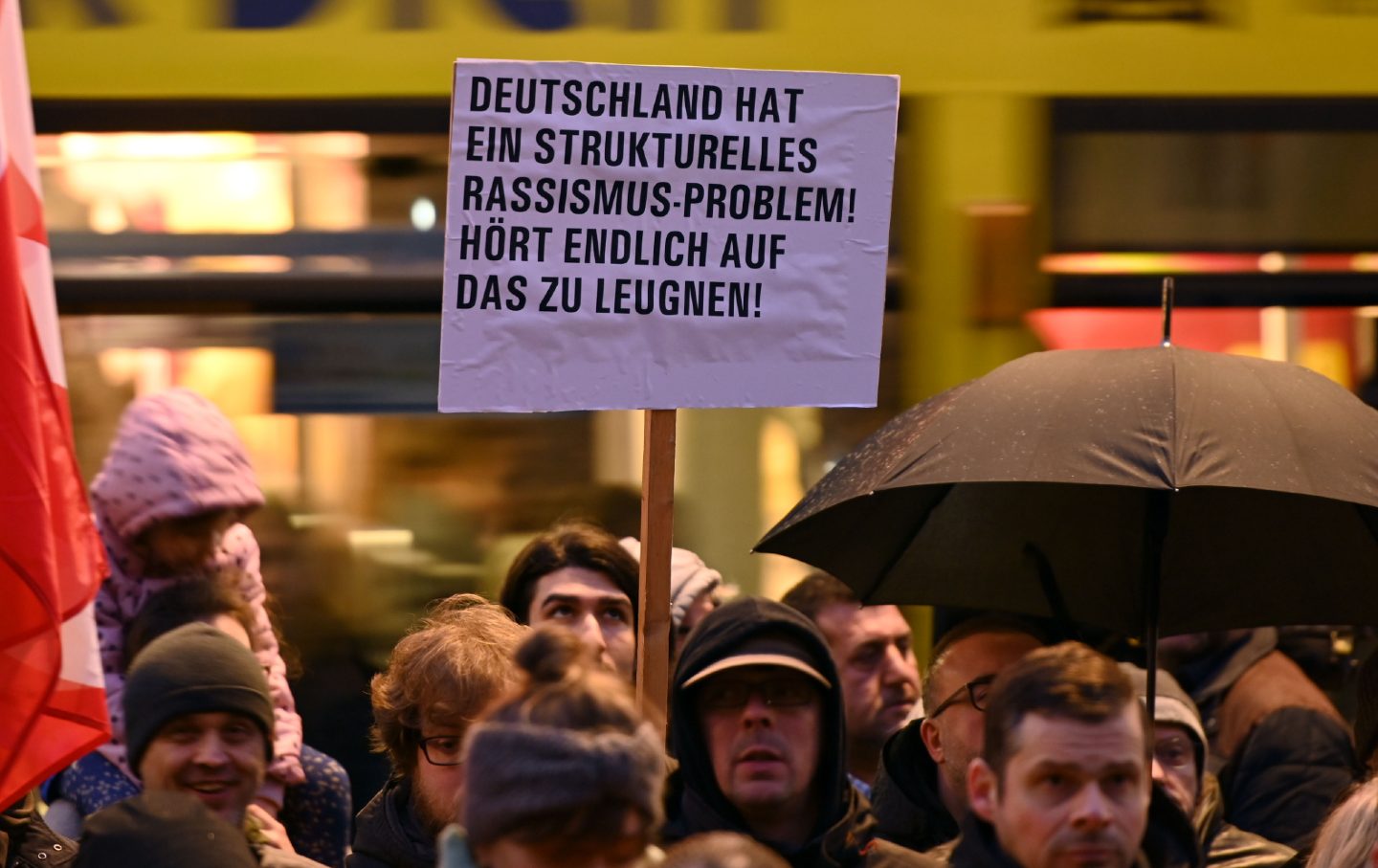 At a February 20 memorial service in Kassel, a sign reads: “Germany Has a Structural Racism Problem! Stop Denying It Already!” (Photo by Uwe Zucchi / picture alliance via Getty Images)

In a shooting rampage Wednesday night at two hookah bars in the city of Hanau, in western Germany, a gunman murdered nine people with immigrant backgrounds and wounded six others. The killer, Tobias R., 43, then went home and killed his mother and himself. The whole episode, numbingly depressing, has unrolled according to the routine you already know: There is the racist manifesto, the condolences offered by the politicians, and the vigils around the country. Unfortunately, no one can have more than a fading hope that this latest act of rightist terror will be Germany’s last.

Just a few days before, on February 14, police had conducted a series of raids across the country, arresting 12 members of a terror cell that was plotting numerous assassinations with the intent to provoke “civil-war-like” conditions. A similar plot was broken up last summer, around the same time that a neo-Nazi already known to police shot and killed a conservative politician who had called for the humane treatment of refugees. Later in the summer, an immigrant from Eritrea, chosen at random for the color of his skin, was wounded in a drive-by shooting. And last fall, on Yom Kippur, yet another right-wing gunman killed two passersby in the course of a failed attempt to attack a synagogue.

Germany’s domestic intelligence service reported, in December 2019, that the number of right-wing extremists in the country had risen by a third since the previous year, from 24,100 to 32,200. Faced with the growing threat of violence, the federal Parliament funded 300 new positions in the intelligence service and another 300 in Germany’s FBI equivalent, the Bundeskriminalamt. This response was supposed to put some muscle behind the promises, made after every one of the terror attacks, to take the problem of right-wing violence more seriously.

But while these resources might help, political racism in Germany is not merely a technical challenge. Radical right ideas are no longer confined to the margins of the country’s political system, which means that the violence isn’t being fueled by some mysterious process of radicalization that occurs out of sight, in a dark corner of the Internet. It’s happening in plain view, as right-wing thinking becomes normalized. Political discussion has been dominated for several years by questions of immigration and identity, and the mainstream parties have struggled to deal with the disruptive presence of the far-right Alternative für Deutschland (AfD), now the largest opposition party in Parliament, and an important power in some states.

Rioting in Germany Exposes the Growing Power of the Far Right

Writing after the attack in Hanau, Annette Ramelsberger, a journalist at the Munich daily Süddeutsche Zeitung, described the impact of Germany’s political right turn on the violence-prone actors who are increasingly coming out of the shadows: “They are seeing how right-wing thought is penetrating ever further into society, how it’s becoming acceptable in society. And suddenly they no longer feel crazy, eccentric, or alone, but important, like the military arm of a national movement. These people sense how the mood is shifting. How radical right thinking is heard even in legislatures.”

Understood in this context, the selection of hookah bars as targets must have seemed perfectly logical to the perverse mind of Tobias R. After all, the AfD has made a point of campaigning against these bars as dangerous, unsanitary, and under-regulated. On Twitter, the Left Party politician Lorenz Gösta Beutin shared several memes that the AfD, which naturally condemns the shooting in Hanau, has used in this effort. “Gang Rape in a Hookah Bar!” screams one.

The premier of the state of Hesse, where Hanau is located, is a member of Angela Merkel’s Christian Democratic Union, and he vowed after the shooting that “this changes everything.” But putting these tough words into practice will not be easy in a Germany that feels headed for uncharted territory.