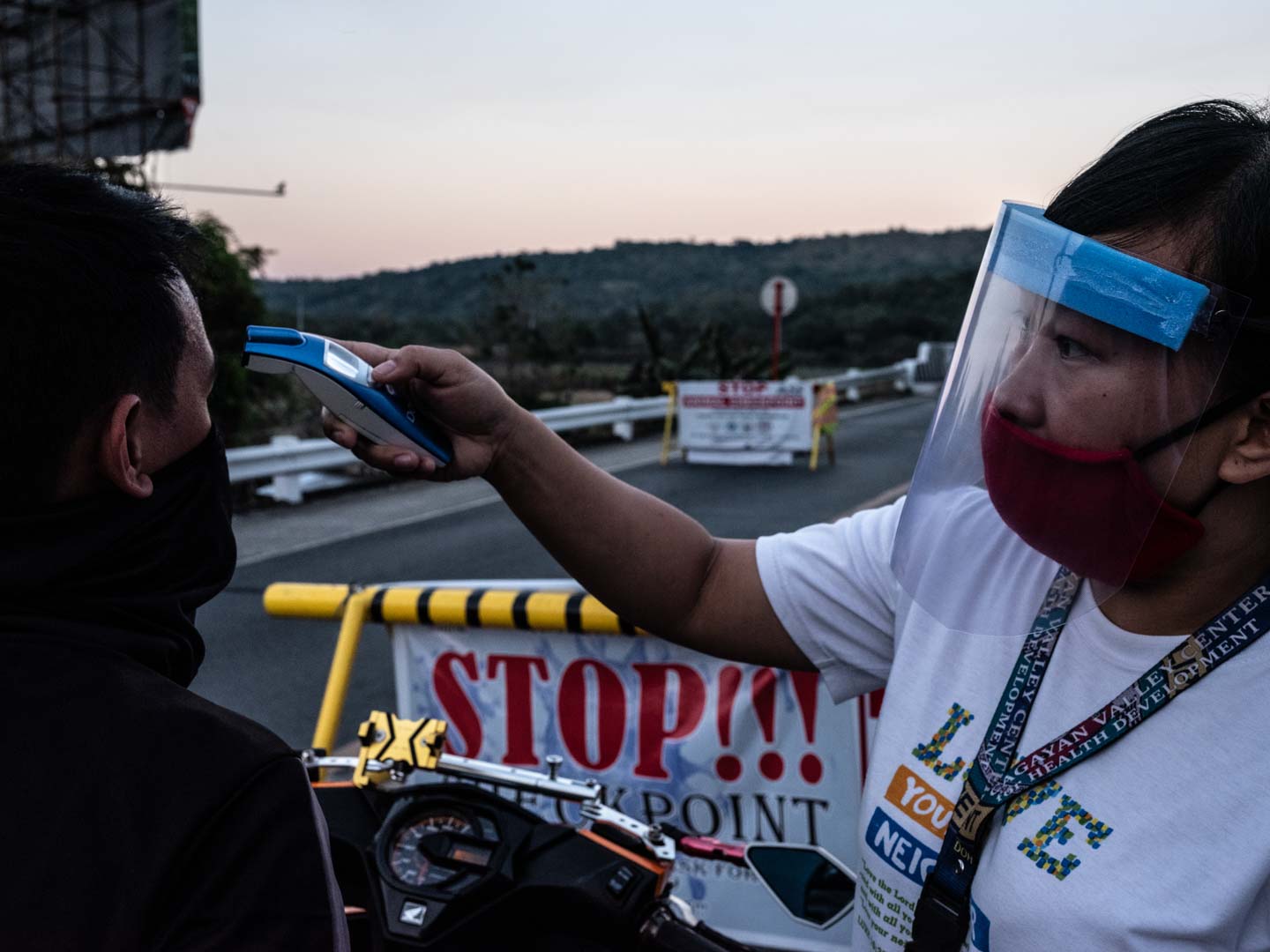 Rose Ann, a rural nurse, checks the temperature of a traveler at a checkpoint. (Xyza Bacani)

To understand the worst-case scenario, think of Italy but with a weaker health care system, says Karl Henson, the director of the Hospital Infection Control and Epidemiology Center of The Medical City, a health care network in Manila. So far, the Philippines, a nation of 100 million spread out over more than 7,000 islands, has not faced the kind of infection rate that hobbled Italy and now has half the global population on lockdown. But the number of cases is quickly growing, and threatens to undo an already fragile health care system. “It is good that the pandemic is hitting urban areas,” says Henson, because “it will be difficult for rural areas to handle critically ill Covid patients.”1

This story is supported by the Pulitzer Center.

On March 17, President Rodrigo Duterte put Luzon—the most populous island in the archipelago, with a population of more than 50 million people—under “enhanced community quarantine,” restricting movement and mass gatherings and enforcing a web of checkpoints across the island. Hourly workers lost their incomes, schools shuttered, and local government units have been scrambling to cope with the lockdown. Outside the big cities, smaller communities are struggling to nip the pandemic in the bud, with precious few resources from the government.2

On paper, the Philippines has a universal, single-payer health care system, with a law passed just last year enrolling all Filipinos into the national health insurance program. But in practice, the system remains a messy patchwork of public and private hospitals, clinics, and doctor’s offices, with a yawning gap in care depending on a patient’s ability to pay for treatment. Even before the Covid-19 crisis, the country’s health care system needed years of investment in infrastructure and medical personnel to allow it to provide adequate and equitable treatment for all who need it. Now, the pandemic is straining these already limited resources.3

In the rural town of Bambang in Nueva Vizcaya, a province in North Luzon, as soon as the lockdown was announced, the understaffed and under-supplied local government units mobilized their health department to develop a plan to minimize the spread of the coronavirus. These rural health units are an essential part of the country’s health care system; they serve as the first line of care for all health needs and serve as a buffer to avoid overcrowding the already overworked hospitals. In Bambang, a team of one doctor and 40 nurses and an army of underpaid health workers with no medical degrees make up the unit at the forefront of the fight against Covid-19.4 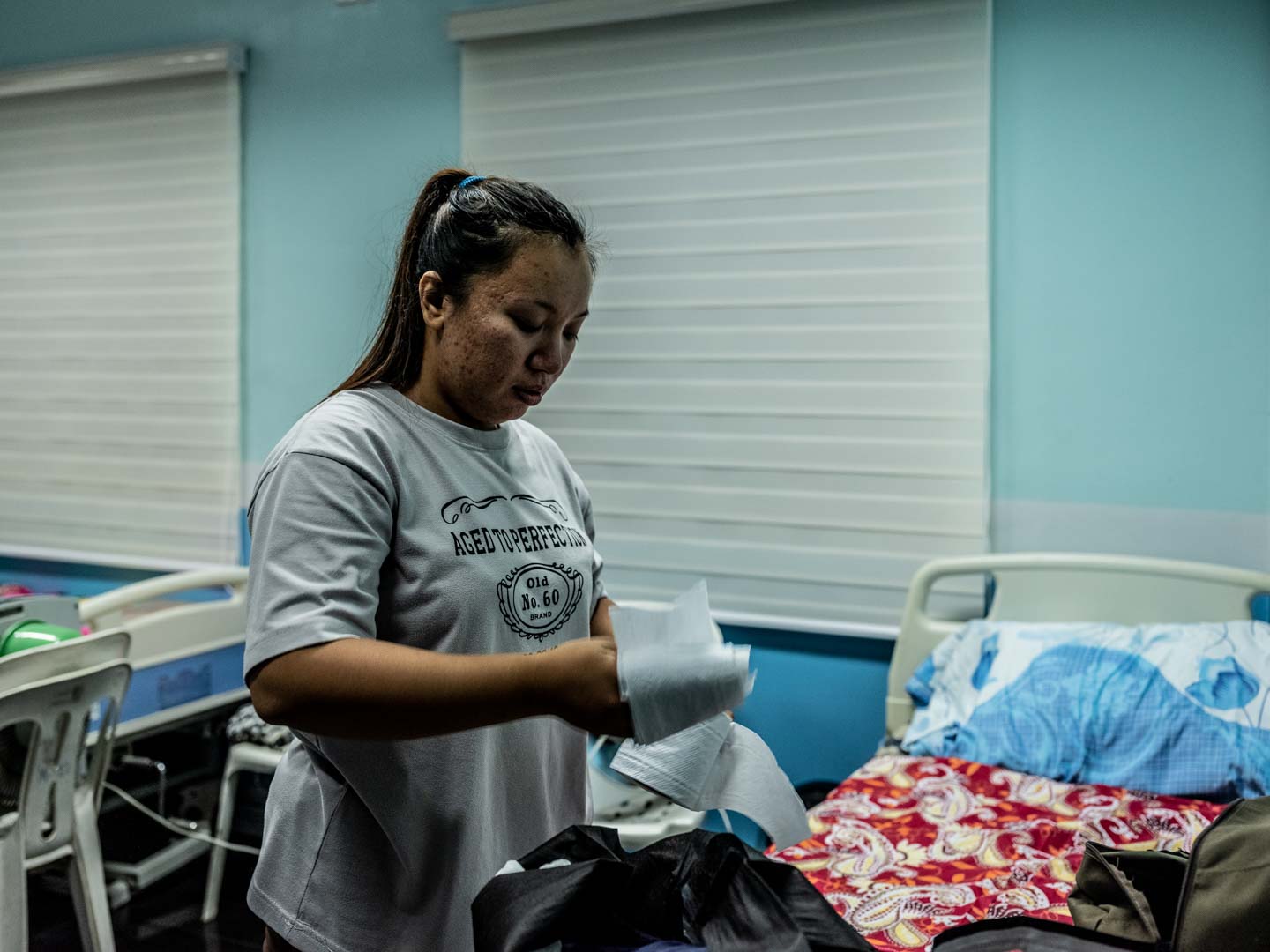 Lady Eleponga, a midwife on a three-month contract who is now working to prevent the spread of the virus, prepares her cloth mask by using tissue paper as an added protection. (Xyza Bacani) 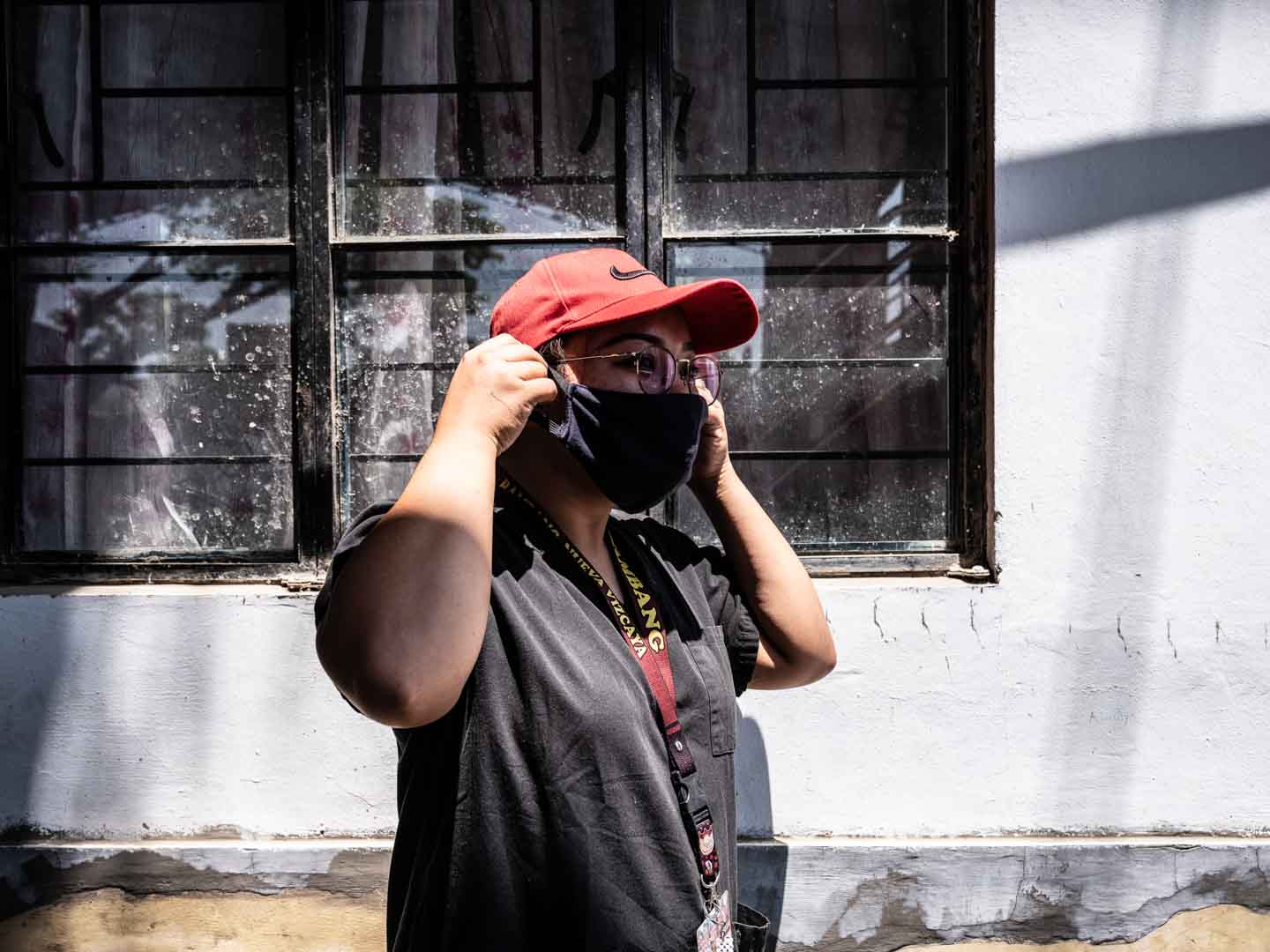 Eleponga adjusts her makeshift mask before going to her next appointment. (Xyza Bacani) 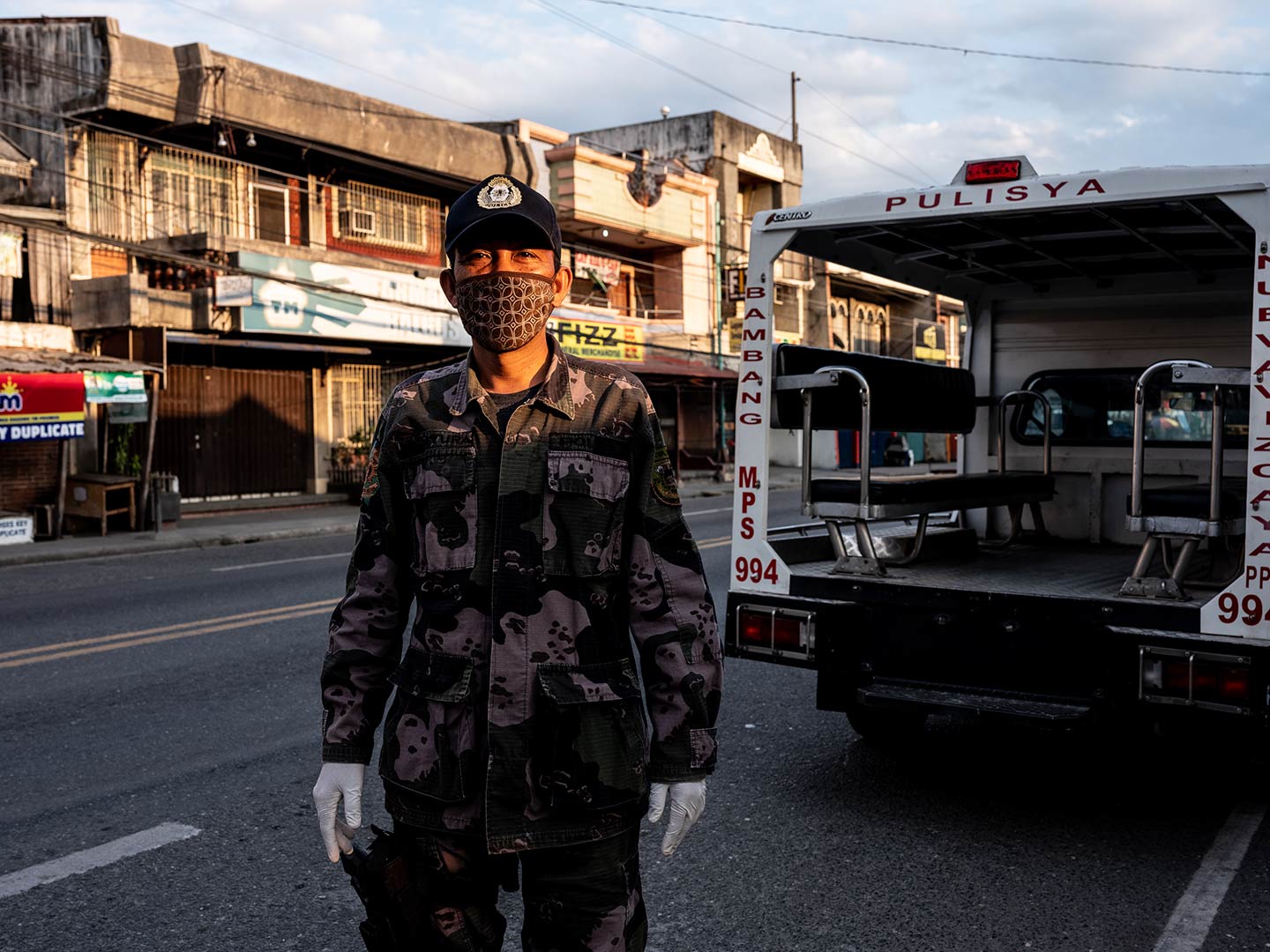 Every barrio is assigned a nurse or midwife to oversee the community, assisted by volunteer health care workers. On regular days, the primary of duties of a Barangay Health Worker (BHW) are to disseminate information in the village, help in nutrition drives and immunization programs, and organize health events. They undergo training from the Department of Health and are considered volunteers; the 1,300 Philippine pesos ($25.48) they receive each month are only honorariums. With the pandemic, their duties have become that much more vital and dangerous, and they now help educate the community on infection prevention, monitor people under quarantine, and are expected to take care of people who are in isolation units.5

“If this is my last battle, then I will die serving my community,” says Reggie Renen, a volunteer health worker for almost 40 years. Renen has volunteered since she was 21, and now, at 60, she is in a high-risk group if she were to contract the virus. “I dreamed of becoming a midwife, but we were poor,” she says; instead, she became a volunteer health worker, starting with a 50-peso ($1) honorarium in 1981. Renen has assisted in childbirth, immunization, and primary health care services in the village, but this is her scariest assignment yet. All she can do is stick to her faith and hope that she will reach retirement age.6 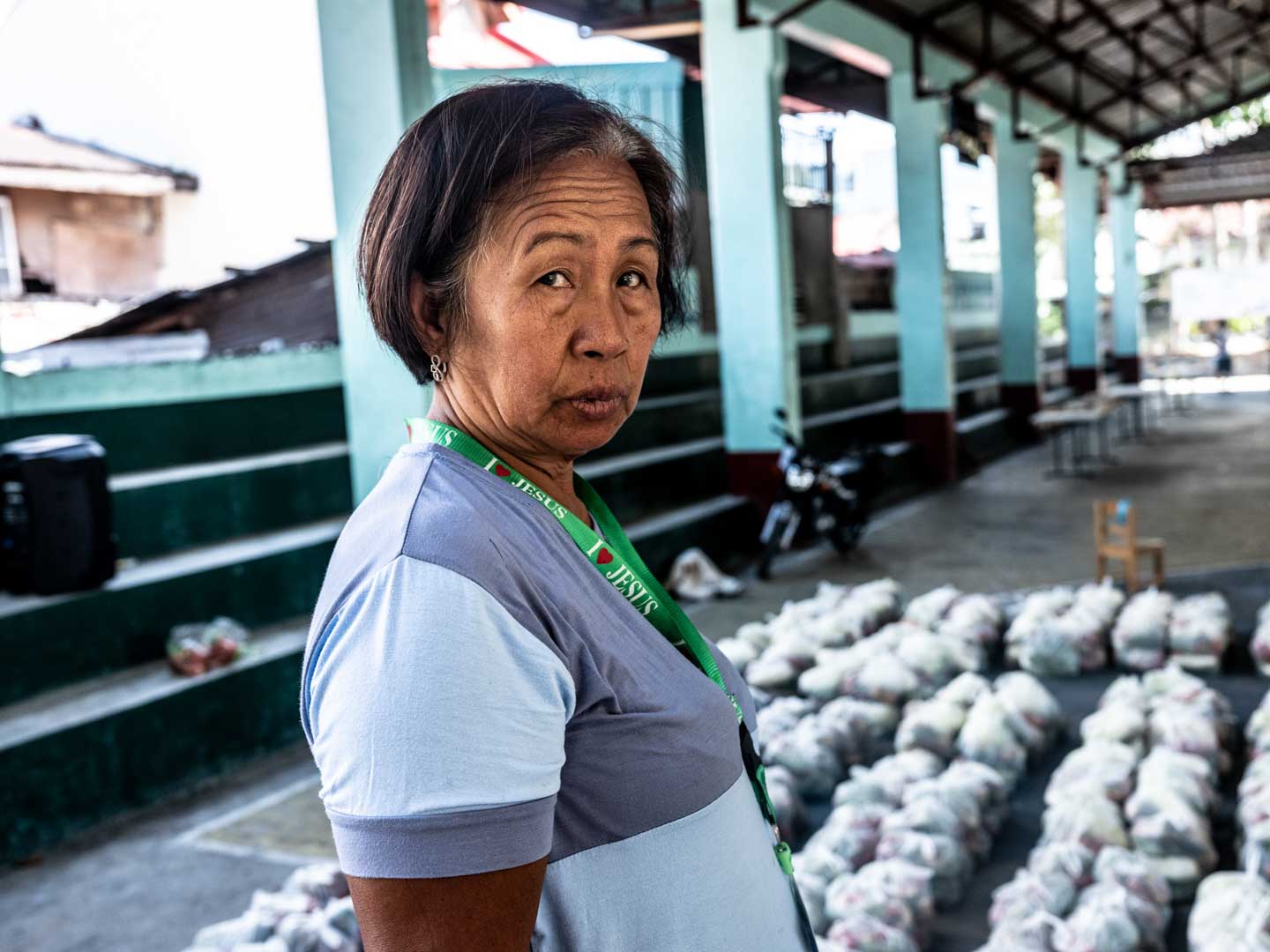 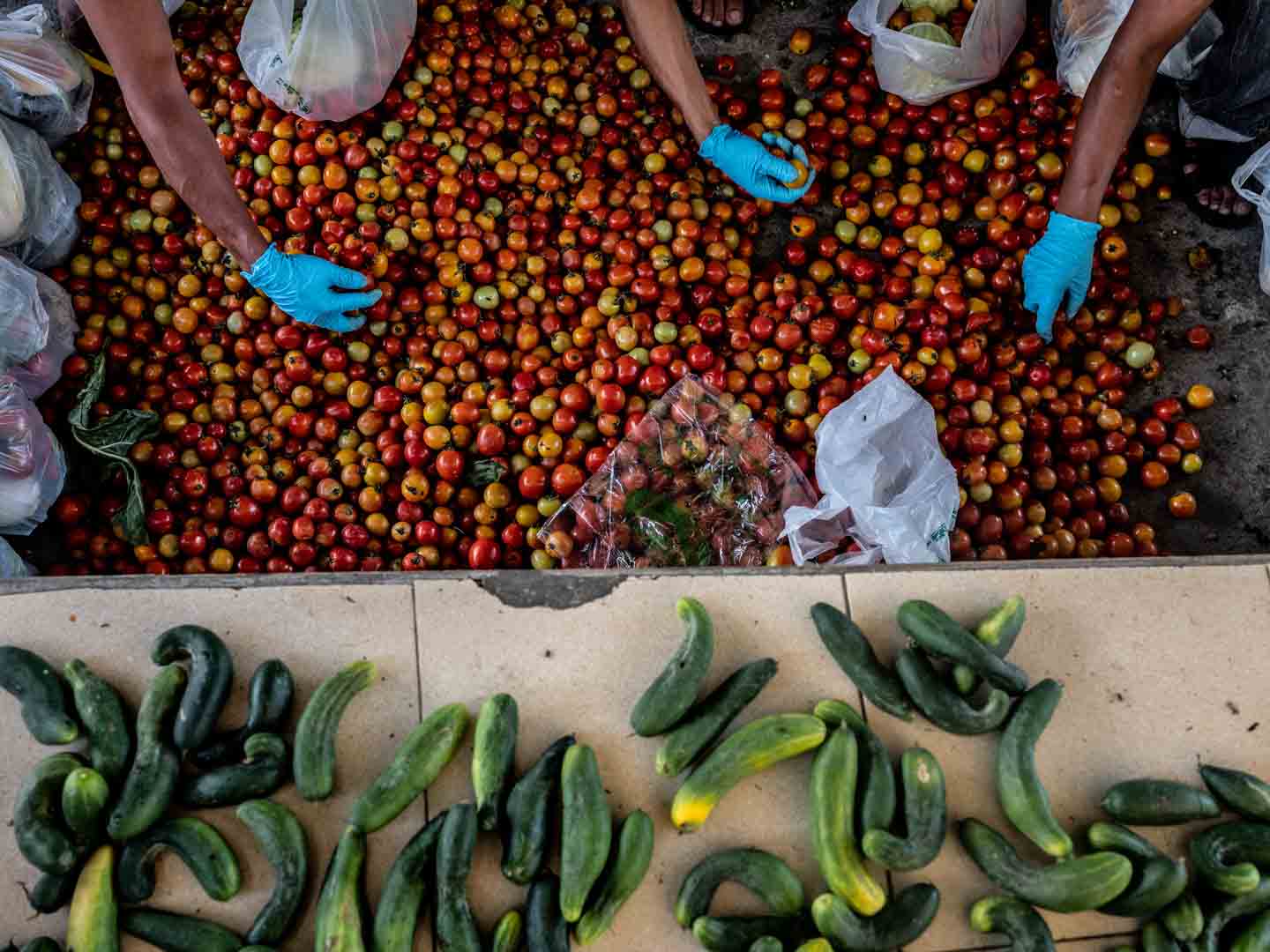 Volunteers pack vegetables at the village center for distribution to the entire village under quarantine, March 30, 2020. (Xyza Bacani) 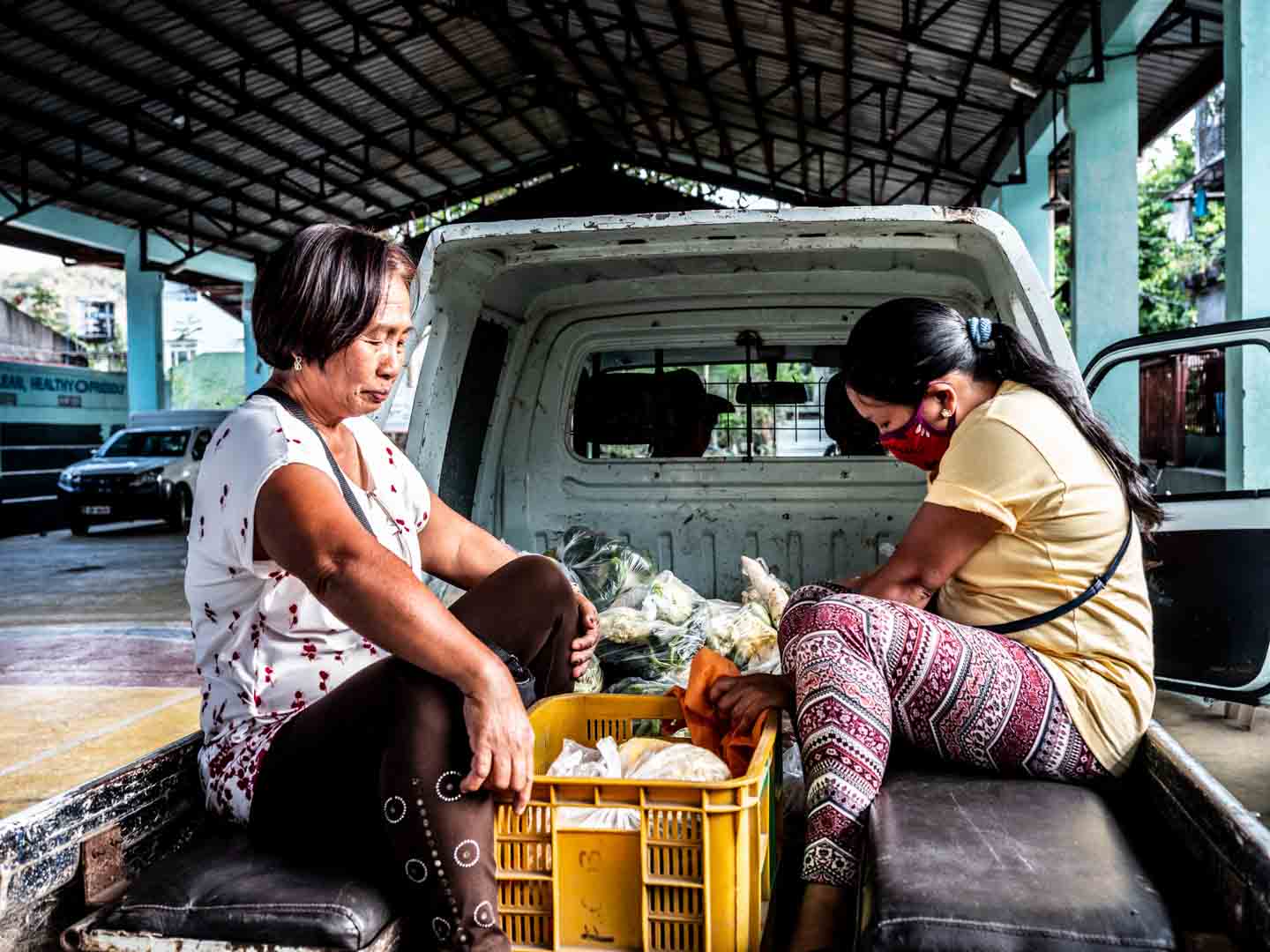 Renen (left) sits at the back of a truck to distribute relief goods to the village. (Xyza Bacani)

For Analyn Martinez, being a volunteer health worker at this time is essential not only because she is helping the community. “My salary is the only income of our family now,” she says. Her husband, a tricycle driver, stopped working because of the lockdown. A mother of two children, Martinez is risking her life, monitoring four possible Covid-19 patients to be able to feed her family. Before the pandemic, she would only report when needed to the health center, but now she goes every day.7

The volunteer health workers also help in packing and delivering relief goods house-to-house, working for almost 16 hours each day. They are in constant contact with the population, not knowing who is infected, not knowing how much danger they are putting themselves in with just their cloth masks.8 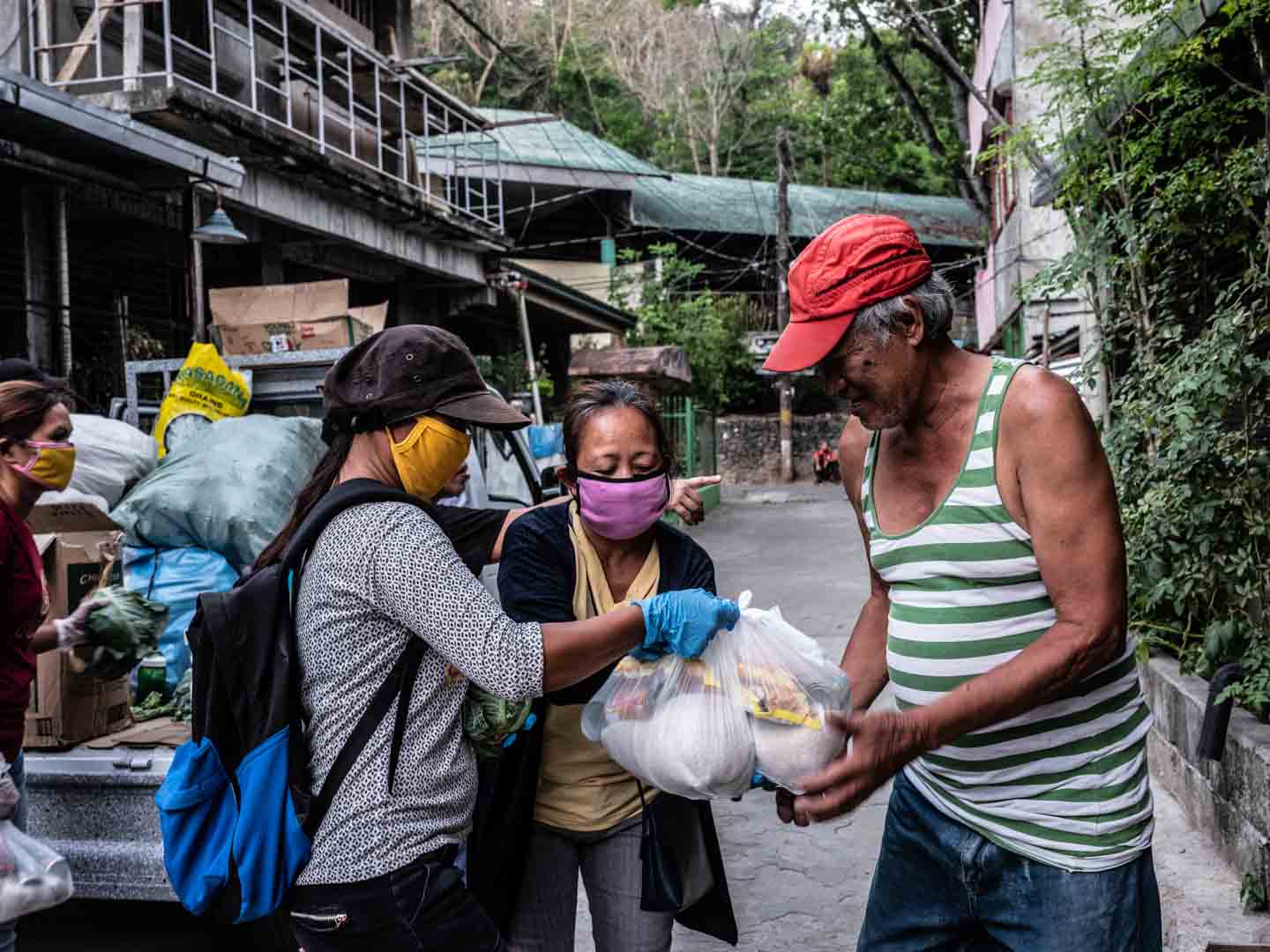 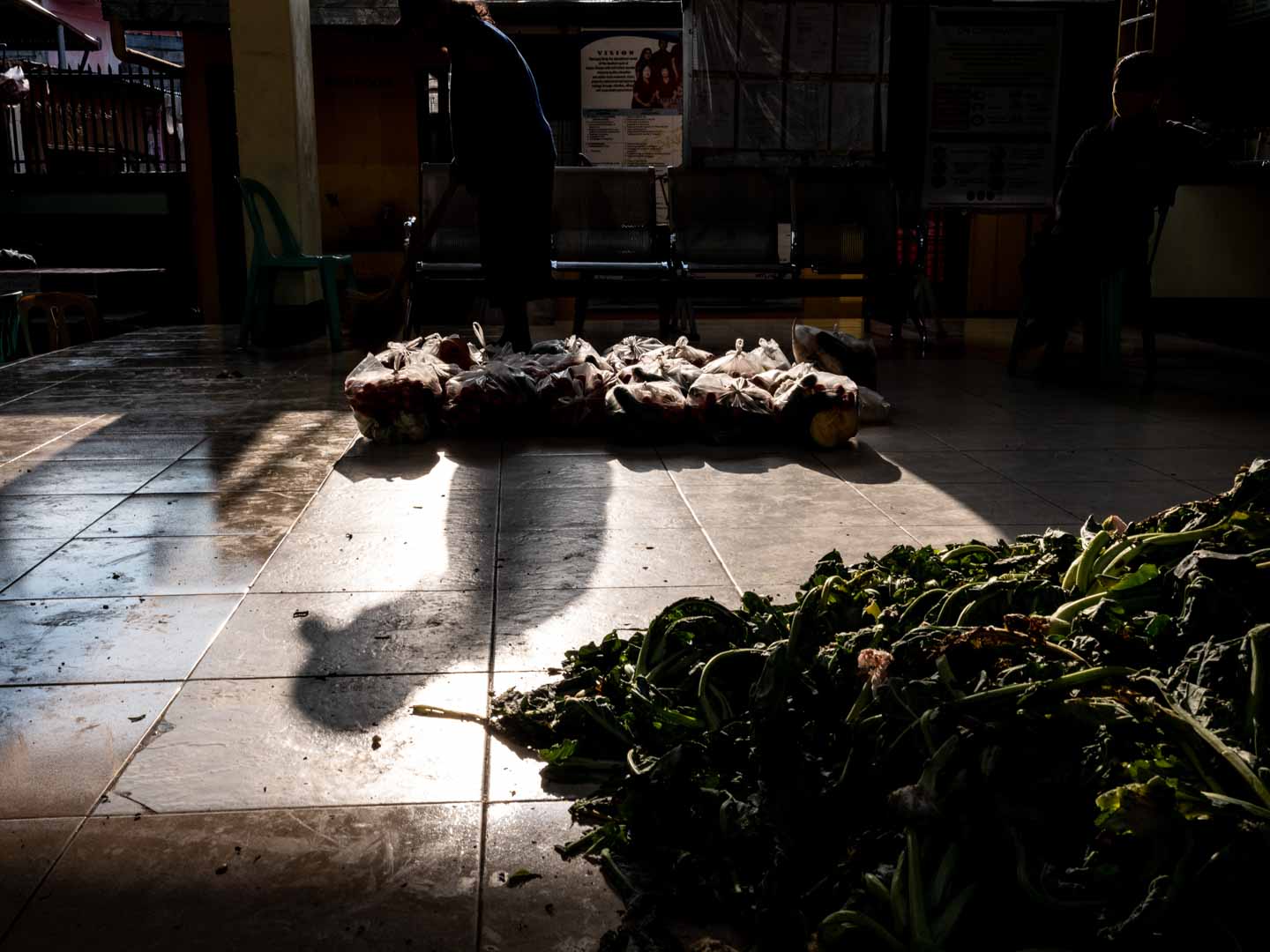 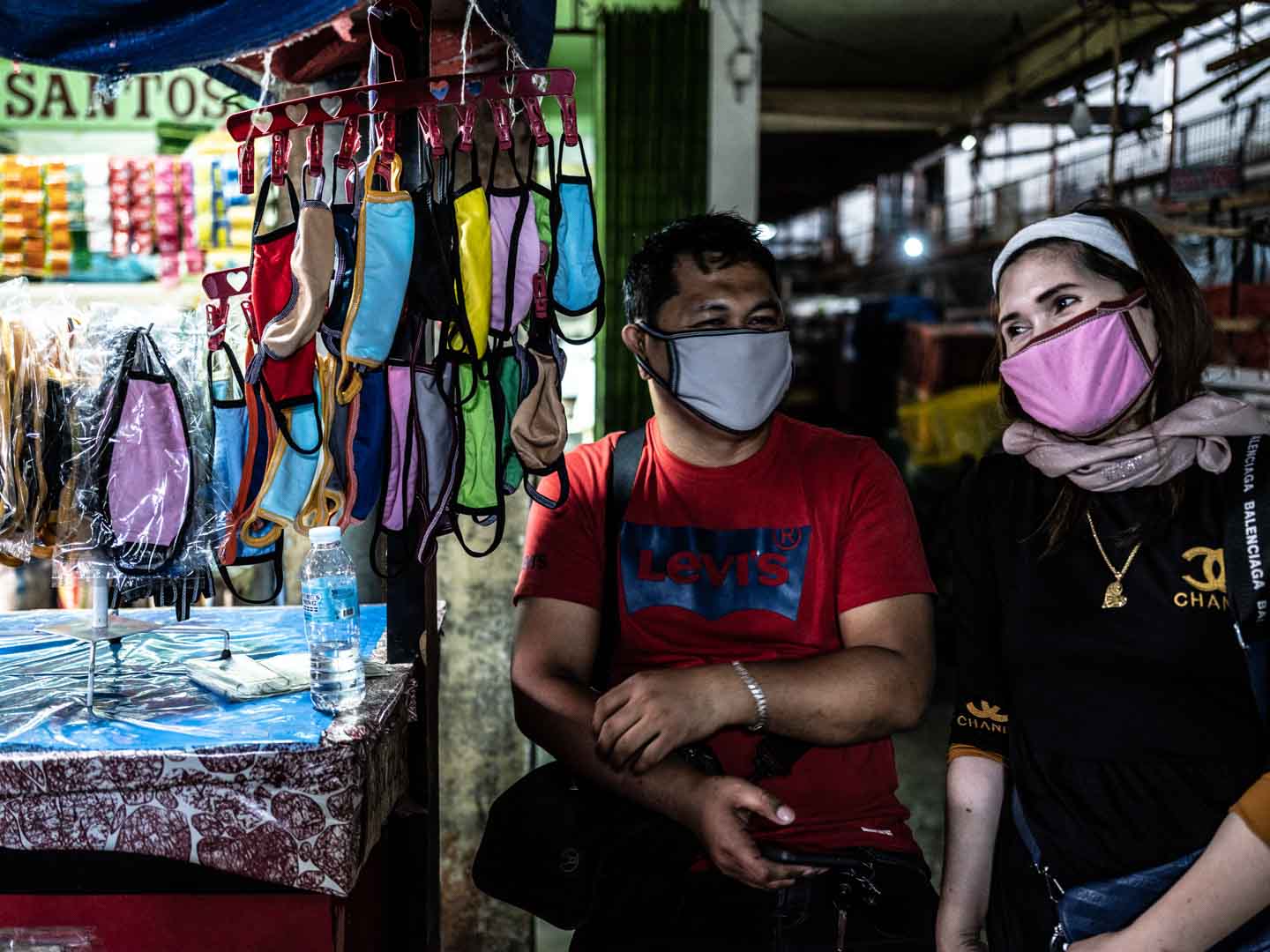 Vendors Abdul and Hanifa sell cloth masks in the public market. Before the pandemic, they sold cell phones, which are not considered essential goods. They switched to masks to continue to have an income during the lockdown. (Xyza Bacani)

Trained nurses are also on the front lines. Lady Eleponga, a midwife, has been under a three-month renewable contract with the rural health unit since 2018, which means that if she doesn’t work, she doesn’t get paid, and her contract can be ended at any time.9

But beyond the instability and lack of job security, her primary concern right now is the virus. “I’m worried about going home because my mother and uncle are immunosuppressed,” Eleponga told me. She reuses her cloth mask by stuffing it with tissue paper, and instead of going home at night she sleeps at the birthing facility in the clinic to avoid bringing the virus home.10

Workers like Eleponga are putting themselves in harm’s way to stop the spread of the virus, but they’re not being taken care of in turn. “I’m not even sure if I still have Phil Health insurance,” she says. “What will happen to my family and me if I get the virus?”11 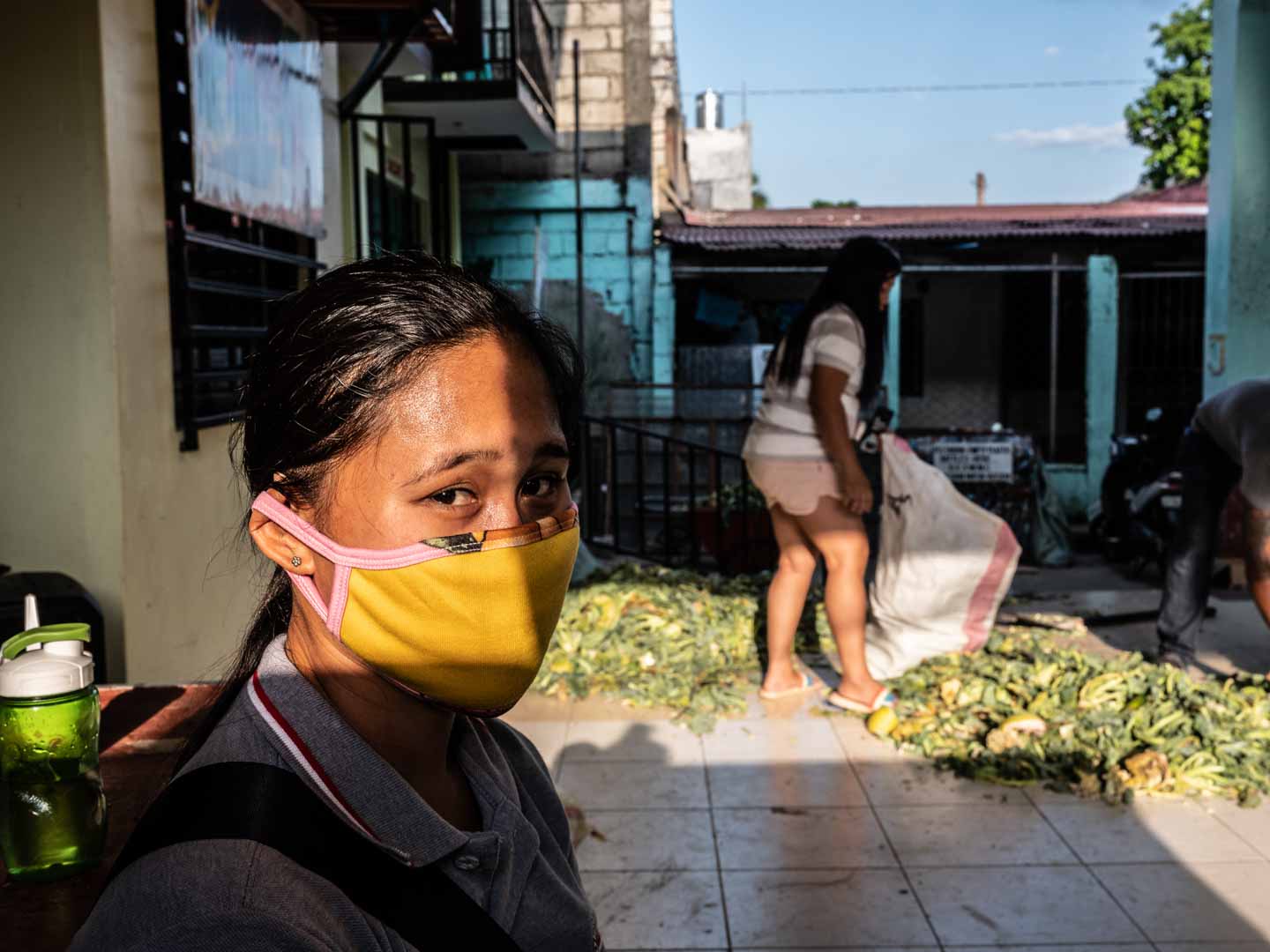 Analyn Martinez, a volunteer health care worker, rests after her shift, which includes checking in on quarantined people and packing and distributing relief goods. (Xyza Bacani)