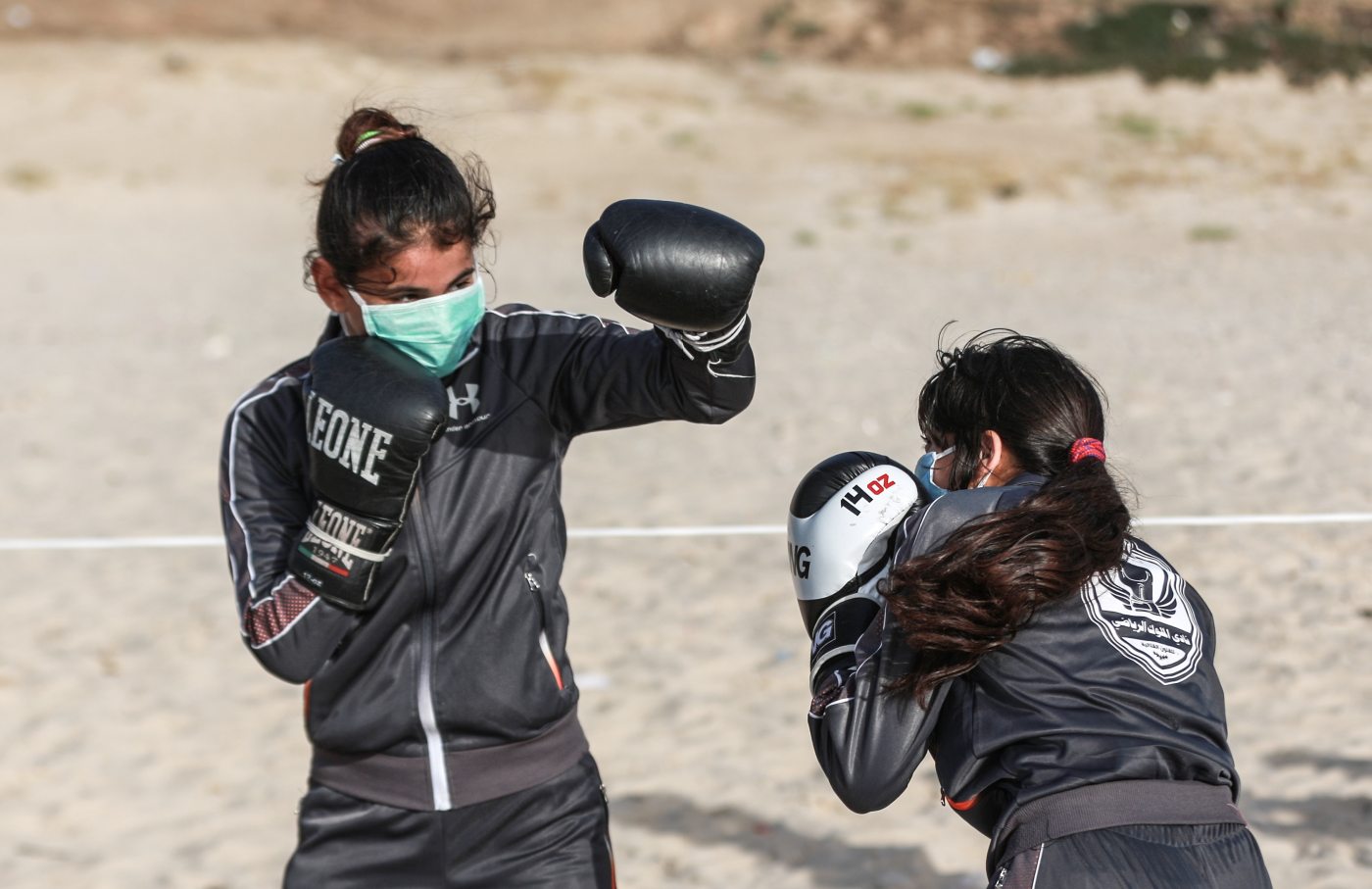 Palestinian boxers train at a beach in Gaza City, Gaza, in May of 2020. (Ali Jadallah / Anadolu Agency / Getty)

The Israeli government has continued its 14-year blockade against Gaza for reasons beyond the military and the strategic. The blockade—alongside bombings and selective assassinations—also accomplishes the political and ideological goal of killing hope. It crushes the aspirations that Palestinian people might have for justice, self-determination, or even a better life.

That’s what makes sports so potent and popular among young people in Gaza. When playing soccer or basketball—two extremely popular pastimes—they feel that another world may indeed be possible. That is why I found it to be potent, powerful, and profoundly moving to learn that, for the first time, there is a women’s and girl’s boxing program in Gaza. Such a team has the capacity to build the reserves of hope and in addition smash gender norms as well as knockout the very idea of passivity.

As Covid has hit Gaza particularly hard, with its absence of medications and hospital infrastructure, the new team has actually doubled in size since June. Now as many as 45 female boxers are on the squad, ranging from ages 7 to 21. Because of the privations caused by the blockade, they are not exactly overwhelmed with facilities and equipment. Some speed bags are stuffed pillowcases and heavy bags are mattresses. They even hold practices on the beach because of Covid. But the hard work is bearing fruit and this ragtag team will be competing in Kuwait this February under the banner of the Palestinian National Boxing Team.

I reached out through intermediaries to their coach, 35-year-old Osama Ayob, as well as several of the players to find out what motivates them to go to the beach and punch mattresses. Coach Ayob says that his own inspiration for the team came from girl’s and women’s boxing teams in Egypt, Lebanon, and Algeria. “I wanted to create a Palestinian girls’ team,” he says. “Women are equal to men and they are half of the society here in Gaza. It also helps to build strength and protect them from any danger.”

I asked about the challenges to setting up this club and he said, “The place [the Gaza Strip] is small, there’s a shortage of money, there’s no legal boxing circuit, a shortage of hand protection gloves, a shortage of all the protective equipment. All is at a trainer’s expense.”

I also wanted to know how the broader Gazan community responded to the start of this boxing team. “There was a bit of a surprise,” he says. “But then it became accepted, because I was training girls at the seashore, at the corniche [the beachfront], and in public places so that the idea would be accepted by Gazan society.” Ayob sees not just health, exercise, and competition emerging from this endeavor but also national pride. “Naturally, it is just a sport,” he says, “but we would like to raise the flag of Palestine at all Arab and foreign forums and throughout the world, so that the flag of Palestine may be held high.”

Reema Abu Rahma is a 22-year-old boxer on the team. She says, “I love boxing because it’s a beautiful, wonderful hobby, and also for self-defense, and it helps to release negative energy.” She says that the hardest part of being on the team is “the difficulty of being accepted by the Gazan community because I am a girl and the difficulty of finding sports equipment suitable for girls.” Her family “was very excited and happy” when they heard she was joining the team, “especially my father and my friends were very supportive, and they also became interested in girls’ boxing.”

This is an exciting development in Gaza, where sports is never just sports. And when a team can survive—if not thrive—amid the blockade, it sends a message of resiliency to oppressed people all around the world. It even feels something like hope.