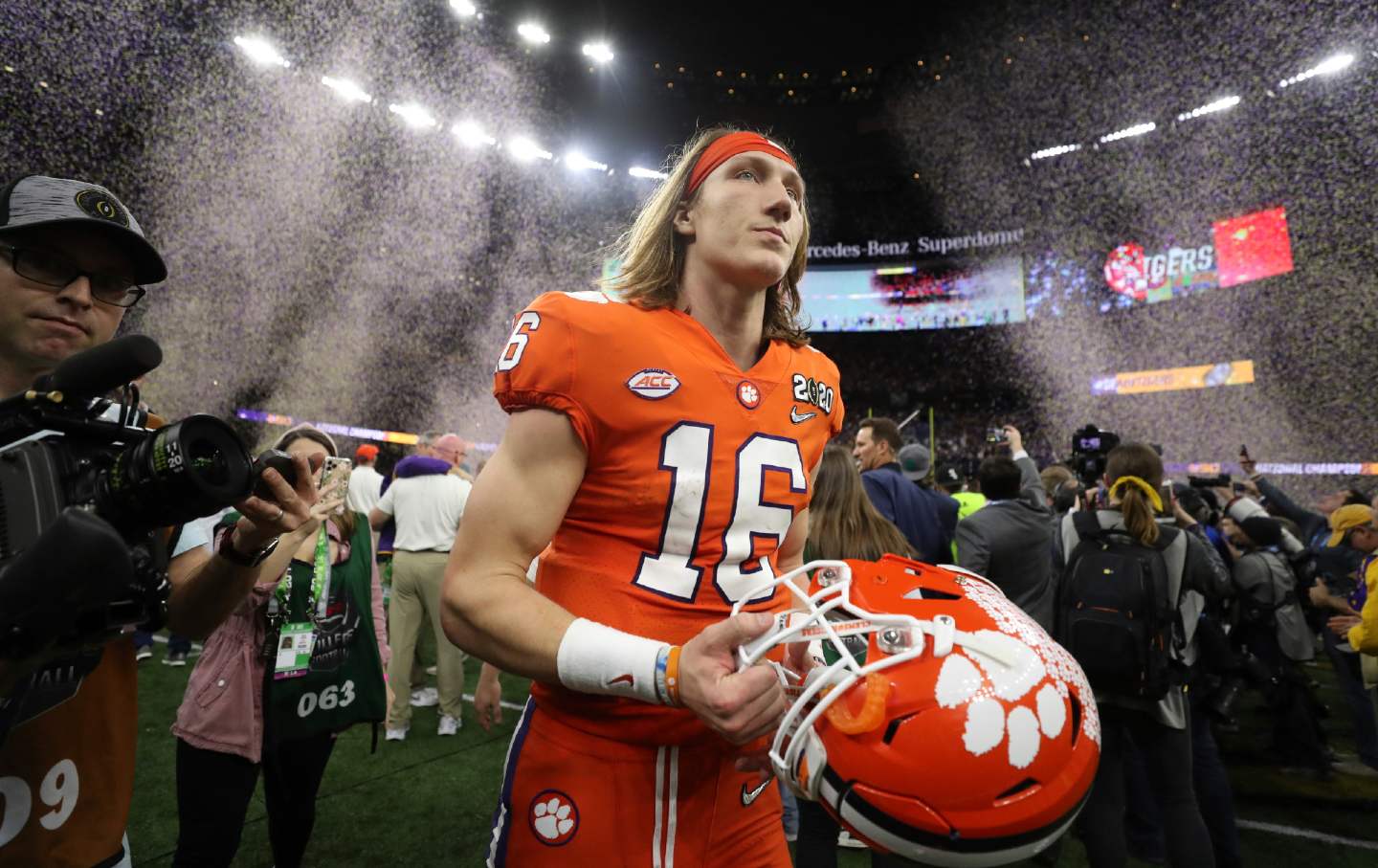 Donald Trump is running for reelection on the claim that he “saved college football.” He did so by recklessly applying presidential pressure to college football conference leaders to forget about Covid-19 and have players take the field. Granted, these conference chiefs truly did not need that much pressure, eager as they were to claim their seven and even eight-figure salaries to keep the trains running on time. And after four years of Trumpian decay with little to justify four more years, the thinking was that bringing football back—especially to swing states in the Big Ten and ACC—would put him on a toboggan ride to electoral college victory.

College sports continuing this season always seemed like an dubious prospect to people actually concerned about a virus that has claimed so many lives. Unlike professional basketball where players could be put in a bubble, or professional football where they could easily quarantine, college athletes would have more freedom, and college students – even if not allowed in the stadium, even if not allowed in their damn classes – would congregate to socialize, party, and feign normalcy in abnormal times. Sure enough, the reopening of colleges and college sports has led to a greater spread of the virus. Yet these stories have largely flown under the sports media radar. After all, who cares about the students? They’re just fans who happen to take classes in between games. Players who have contracted the virus also have been disregarded by a sports media that prefers analyzing game film to calling out this obscene negligence.

Yet this latest story could not be ignored by anyone. Trevor Lawrence, the blonde, long-haired quarterback for Clemson, the frontrunner for the Heisman Trophy, the face of college football, has now been diagnosed with Covid-19. Just 21 years old, Lawrence really wanted to play this season. And powerful people in college football, the people who work in the shadows of this dirty multi-billion-dollar business and their media stenographers, elevated Lawrence’s voice as if he wasn’t a 21-year-old kid with an itch for football, and instead an authority like Dr. Fauci in shoulder pads.

They swooned when Lawrence spoke out for the season to commence.  In August he tweeted, “Players are at just as much, if not more risk, if we don’t play. Players will be sent home to their own communities where social distancing is highly unlikely and medical care and expenses will be placed on the families if they were to contract COVID 19. Not to mention the players coming from situations that are not good for them/their future and having to go back to that. Football is a safe haven for so many people. We are more likely to get the virus in everyday life than playing football…..”

This argument reeks of paternalism: the idea that players would be safer under the watchful eye of millionaire head coaches who surely have their best interests at heart rather than “their communities” – a phrase which conjures images of reckless, adult-free, impoverished hovels. But Clemson isn’t Boystown, and Coach Dabo Swinney isn’t Father Flanagan.

And now, even under the selfless protection of his Coach Swinney – salary $9.3 million per year before bonuses – Trevor Lawrence has the Rona. The people in power who used this 21-year-old over the summer as a stalking horse for their own profit motives should be ashamed. The people deeming unpaid college athletes as “essential workers” even though they don’t get paid should share that shame.

As for Trevor Lawrence, he should forget about Clemson, forget about the Heisman trophy, heal up, and get ready to be the number-one pick in the NFL draft. Instead, he is already getting prepared for Clemson’s game a week from Saturday against Notre Dame, telling everyone he is symptom-free. This isn’t Trevor Lawrence’s fault. He’s 21, for goodness’ sake. If you are searching for blame, you have to look on the sidelines, look in the offices of university presidents, and look at a system that sees college athletes as expendable commodities. Even the stars with long blonde hair.