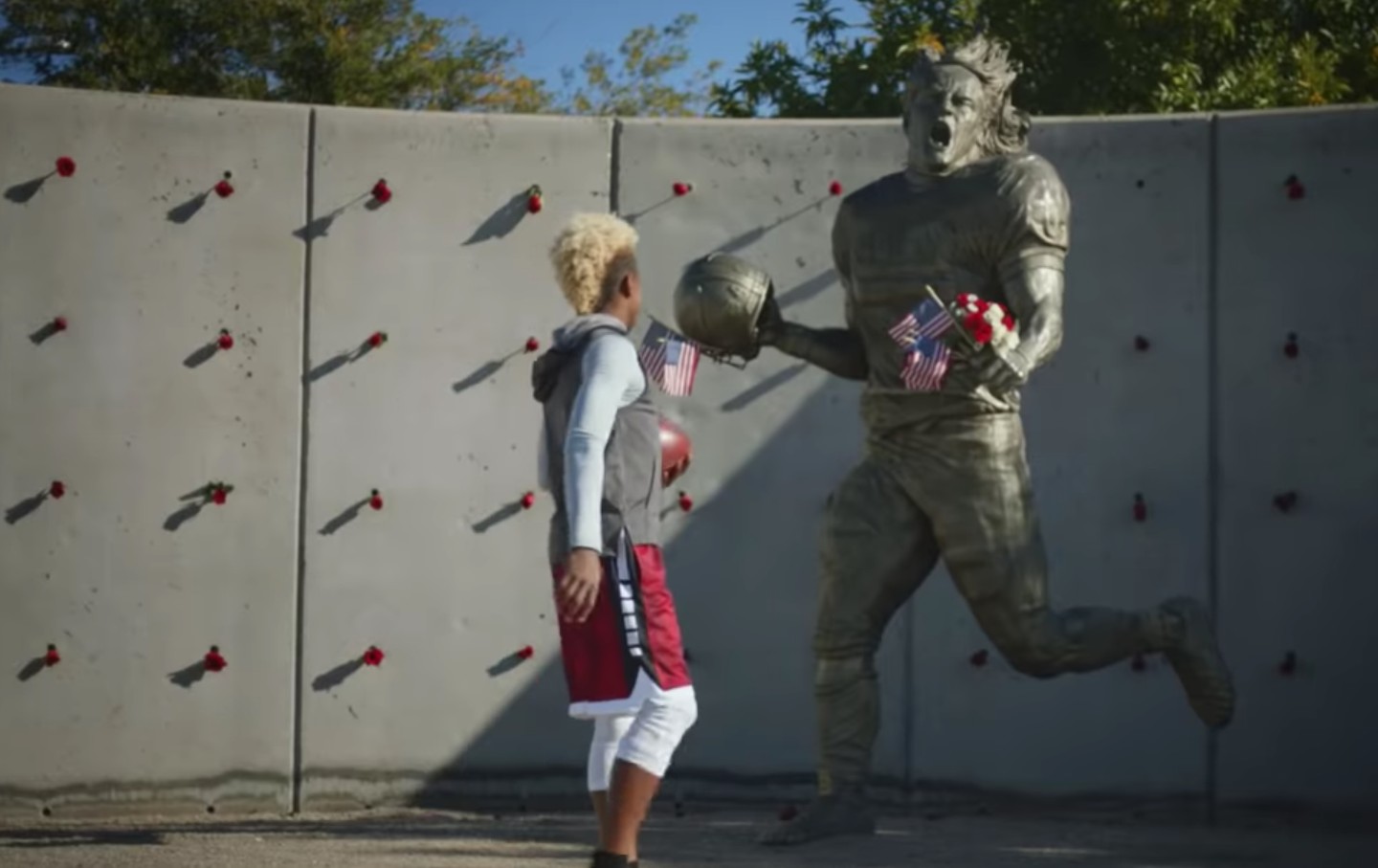 A young boy pauses in front of a Pat Tillman statue in the NFL's "Next 100” commercial before the start of Super Bowl 54. (NFL / YouTube)

You could choose your own country based upon your worldview. There was, “Look how awesome the United States is, because in three years we made America great!” Or you could order up, “Look at how Donald Trump has turned our country into a racist, festering shithole!” Two political ads bookended Super Bowl 54, and they portrayed two visions courtesy of two New York City billionaires, Donald Trump and Michael Bloomberg.

The ads represented two stark perspectives that have nestled inside this country: one that is thrilled with the rising stock market as well as the naked bigotry of this administration, and another that believes Trump has dragged this country toward racist autocracy.

These ads gave life to the mission statement and rosy Norman Rockwell–esque politics projected by the 2020 Super Bowl. The NFL’s stated mission is to “keep politics out of sports.” Its owners even colluded against a Super Bowl quarterback and banished him from their league because he dared to take a knee against racialized police violence. But, as was more than evident on Sunday, it’s not politics that the league wants to expunge but a certain kind of politics: resistance politics, anti-racist politics, anti-militaristic politics, the politics of human liberation. Instead, an entire other set of ideas was spray-painted all across Super Bowl Sunday, and somewhere in the middle of that political messaging there happened to be a football game.

The reality of the Fox production of Super Bowl Sunday could be heard in a comment Boston Globe writer Ben Volin reported from a Fox executive: “If it doesn’t celebrate football or celebrate America, it’s not going to be in the show.” The NFL’s idea of “celebrating football” was seen in a commercial where a young black child, with dyed blond hair, is seen running through a field of would-be tacklers, without helmets or pads, as NFL legends cheer him on. There was a shot of 83-year-old legend Jim Brown sitting on a park bench telling him to “take it to the house.” The child, in the middle of his epic jaunt, stopped in sad silence at a statue of the late NFL player turned Army Ranger Pat Tillman.

This much-praised ad was football propaganda of the worst sort. Look at every box it checked. It portrayed the game as safe for people with individuality (the blond dyed hair), even though it is a league that tries to crush individual expression. It celebrated black athleticism, even though it is a league without black ownership and a shameful paucity of black coaches and executives. It projected a sport that is both safe for children and absent of physical tragedy, even though it is a game that breaks players’ bodies and causes life-altering concussive head injuries. It celebrated Jim Brown, even though Brown has a long history of violence against women. And, perhaps most cynically, it used the memory of Pat Tillman as a near-mythological symbol of the synthesis of the NFL, the military, and sacrifice; positively genuflecting in front of his statue, even though Tillman’s history is profoundly more complicated than that. Even though Tillman turned into a critic of both the army and the invasion of Iraq while he was still in service, and then died under a very suspicious and sloppily covered-up instance of friendly fire; even though the NFL, with all its power and political connections, never lifted a finger to help Tillman’s family when they were pressuring the government to find out the truth.

As for celebrating “America,” this was seen by invoking militarism at every turn, even comparing NFL players to the troops. The only comparison, in the real world, is that both suffer from traumatic brain injuries that are covered up or scoffed at by their respective commanders in chief. The commercials also echoed this theme of one America, most grotesquely in an ad for Budweiser that celebrated the hugging of fully armored police by a young black man at a standoff between riot cops and young protesters who were calling on police to stop killing them.

The one respite from this was the epic halftime show featuring Jennifer Lopez and Shakira, which, in an act of protest, had Latinx children in cages as part of their set. In a video taken before her performance, J-Lo said, “Other people can try to build walls, keep us out or put us in cages.” It was a harrowing image to have projected amid the glitz and glamour. Yet even this—not to mention her and Shakira’s scorching performance—rings somewhat hollow, since we know that the halftime show was planned and executed by Jay-Z as part of his NFL-branded social justice initiative, which seems entirely geared toward enriching Jay-Z and erasing Colin Kaepernick. But the two women rocked it and, in addition, they seem to have upset all the right people: evangelicals like Franklin Graham more concerned with the children at home seeing some skin than the children who live behind bars in our homegrown internment camps.

I swear a game was played somewhere amid this politicized din. The actual sport appeared almost quaint discerned through the blaring John Philip Sousa bombast. It was a fun game where the Kansas City Chiefs came from behind and scored 21 points in the fourth quarter to win 31-20. But the actual contest that will be remembered was the battle between the forces of Fox bleating about the greatness of America and those who see us turning toward a much darker place. There is no amount of football and no flag big enough to hide the fact that these are dangerous times, and any kind of national unity—even around football—only exists in the fevered dreams of Fox Sports executives and Madison Avenue hacks.