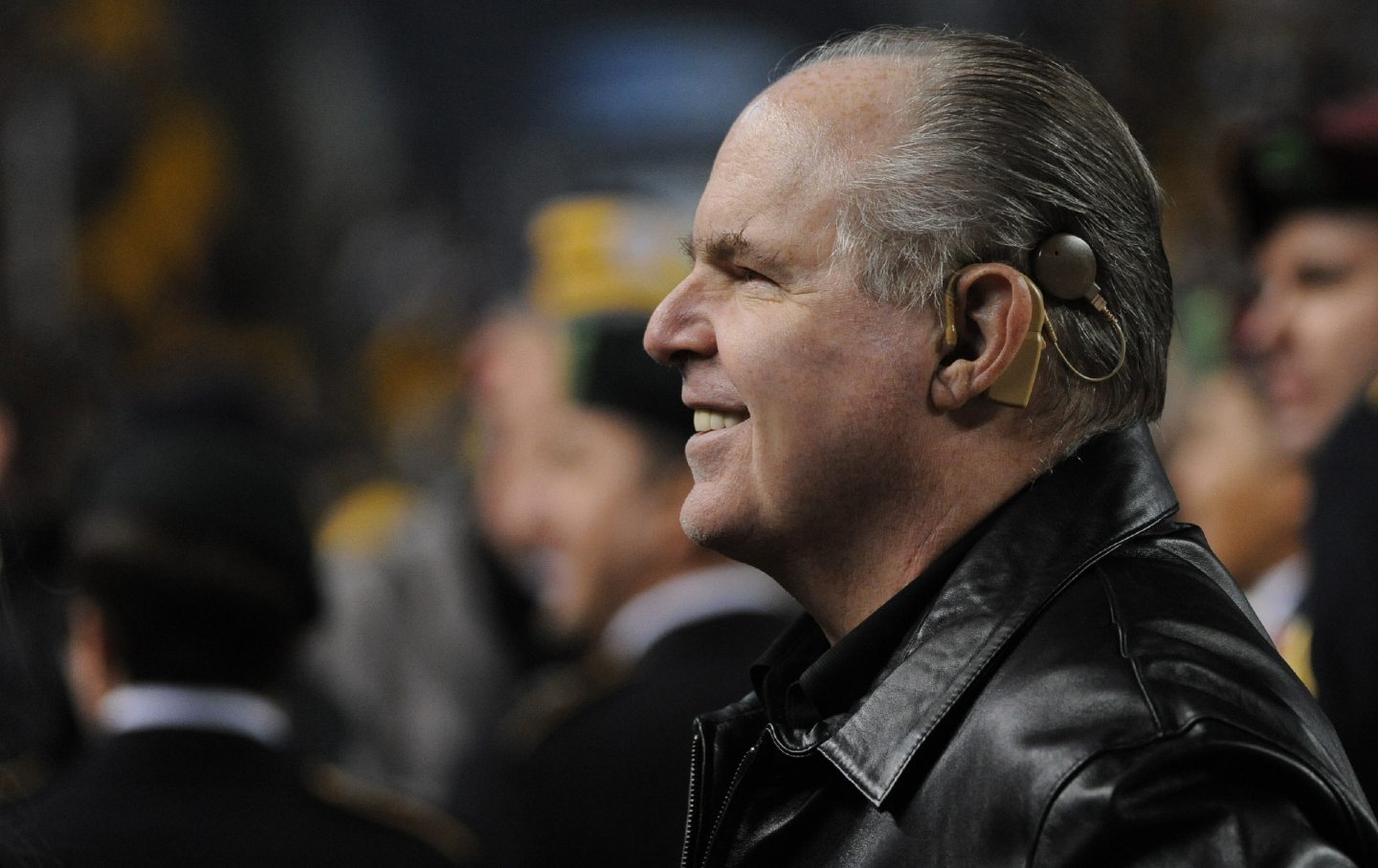 Rush Limbaugh looks on from the sideline before an NFL game in 2011. (George Gojkovich / Getty Images)

In 2010, Rush Limbaugh had a bright idea: The right-wing shock jock would buy an NFL team, specifically the St. Louis Rams, bringing him a new level of power and respectability. The response by players in the league—even in those pre-Kaepernick times—was pretty unequivocal. “I don’t want anything to do with a team that he has any part of,” then New York Giant Mathias Kiwanuka said to the New York Daily News “He can do whatever he wants; it is a free country. But if it goes through, I can tell you where I am not going to play.”

The overwhelming dislike of Rush among the ranks of players was rooted in his racism and bigotry. The NFL players, 70 percent of whom are Black, knew Rush Limbaugh as the guy who said, “The NFL all-too-often looks like a game between the Bloods and the Crips without any weapons.” He was still known for his infamous stint at ESPN where he spewed filth for four entire weeks—his chief target being Black quarterback Donovan McNabb—until he was shown the door.

It turned out that NFL franchise owners, even though many of them shared Rush’s politics, found him to be too vulgar, too gauche, and too much of a media headache to be let into their little club. So they turned down his bid. (In this regard, Rush was very much like the man spawned from his seed-sized heart, Donald Trump, who had made a similar bid to buy the Buffalo Bills, but franchise owners found Trump to be a boorish sleaze and showed him the door. Ironic, given their future fulsome financial support, but these franchise owners like to do their business in the shadows.)

Rush became enraged at this rejection, and went after the media. He was particularly upset with me and Bryan Burwell, the late columnist for the St. Louis Post-Dispatch, who wrote extremely critically about Limbaugh’s efforts to buy the hometown team. Rush called us “state-run-media scum.” I joked upon hearing that Rush died that I put that on a business card. But the truth is, especially as a young journalist, the experience was quite jarring.

To be sure, “state-run-media scum” is positively tame compared to what Rush said about Jesse Jackson, Sandra Fluke, AIDS victims, Muslims, and all manner of people he made his daily business to dehumanize. It also sounds quaint, considering what too many people—particularly women and people of color—deal with in the sewers of social media. But what made it frightening was his “dittoheads,” his army of followers ready to rumble at Rush’s call to arms. I wouldn’t say I was deluged with communiqués threatening violence against me, but they did come.

I also received an e-mail from Rush’s lawyers threatening legal action. Their charge was that I had defamed him by calling him a racist. I should have laughed it off—I mean that’s like saying one would be defaming water by calling it wet—but I consulted a lawyer out of fear that I was about to be destroyed by legal costs and an ever-swirling whirlwind of personal attacks. (They never pursued their suit, but damned if it didn’t scare me something fierce.) If something positive came out of the entire situation, it is that I reached out to Bryan Burwell to see how he was responding to the attacks and we became friends through the correspondence. Bryan passed away in 2014. I believe he is a forgotten pioneer as one of the great, trailblazing Black sports journalists of his time and someone who was never afraid to bring a political slant to this allegedly apolitical world of sports. Bryan wasn’t scared a lick by Rush, and his courage was contagious.

As for Rush, the threats faded as did his interest in our persecution. Rush didn’t dwell on his rejection by the NFL because it would have meant criticizing the rich, white billionaires to whom he had spent his career in slavish service. Rush still lived on to launch Donald Trump and put his permanent stamp on the Republican Party as one rooted in white grievance, bigotry, and incitement to violence. He was the worst kind of bully: one who would only attack the vulnerable and cry in a corner when the beaten-down dared to strike back. He called us scum for calling out his racism, but as Martin Sheen said in the movie Wall Street, “If that’s scum, I’ll take it over a rat any day.”