On January 5, four new members of the New York City Council arrived at Rikers for an unannounced tour. Council members Alexa Avilés, Sandy Nurse, Tiffany Cabán, and Shahana Hanif visited five of the island’s eight jails, including the isolation units that should already have been shuttered.1

There, they talked with a man who had been in isolation since July and allowed to shower once a week. They spoke with another man who had been sentenced to 30 days for throwing water at an officer, and a third who had waited two weeks for treatment for a broken shoulder. All spent 23 to 24 hours alone in a cell each day.2

Jail officials refer to the practice as punitive segregation. Critics—including those who have experienced isolation—call it solitary confinement, or torture. Both staff and incarcerated people also refer to it as “the box.”3

A city law, passed in June 2021, should have ended punitive segregation by November. But the practice has only continued, and newly minted Mayor Eric Adams has vowed to keep it going in an attempt to curb the jails’ exploding violence. “Enjoy the reprieve now!” the retired police officer said at a mid-December press conference, a few weeks before being sworn in.4

Adams’s announcement came after staff absences on the island-jail had skyrocketed. The next week, the Covid positivity rate jumped to 21 percent from 1 percent less than two weeks earlier. By early January, it had increased to 37 percent (higher than the city rate of 33.5 percent). At the same time, violence—by both staff and incarcerated people—continues to plague the jails.5

His announcement was praised by the Correction Officers Benevolent Association, the union representing the 7,575 officers (and the additional 400 to be hired within the next year) and with whom he had shared a lobbying firm.6

It drew sharp criticisms from advocates, formerly incarcerated people, and family members of former Rikers inmates, including Melania Brown, whose sister Layleen Polanco died in segregation at Rikers in 2019. “If you want to continue to use solitary confinement, it means you are okay with people dying and people being tortured. While you and others are at home with your families during the holidays, there are families burying their loved ones,” Brown said.7

It also drew fire from 29 of the city council’s 51 members, who drafted an open letter to Adams urging him to reverse his position and noting that the United Nations and numerous human rights organizations have classified solitary as a form of torture. During the council’s previous session, 35 members had sponsored legislation that would have taken the city’s rule even further—guaranteeing 14 hours out of cell each day with access to programs and socialization. Then-Speaker Corey Johnson did not bring the bill to a vote before the end of the 2021 term.8

While Adams had previously called Rikers a “national embarrassment” and a “stain on our city” and endorsed a plan to replace the island jail with four smaller jails by 2027, his office did not respond to repeated request for comment except to note that he will soon be releasing “a comprehensive plan for Rikers safety.”9

But members of the mayor’s transition team on public safety and justice say that they did not recommend reinstating solitary confinement. Sharon White-Harrigan, executive director of the Women’s Community Justice Association, and other transition team members told The Nation that their recommendations had focused on decarceration. White-Harrington is disappointed and discouraged by Adams’s rollbacks, calling them “a step backwards.”10

“I Wanted to Get Out Any Way I Could”

Candie Hailey spent more than two years in punitive segregation. Unable to afford the $100,000 bail set by a Bronx judge, the 29-year-old entered Rikers in February 2012. Less than two months later, she was charged with assaulting an officer—a charge that she vehemently denies. “Actually, the officer assaulted me,” she told The Nation. She was placed in punitive segregation. She was not sure how long she was supposed to be isolated and soon began losing track of the days. She also accrued disciplinary tickets resulting in more time in the box.11 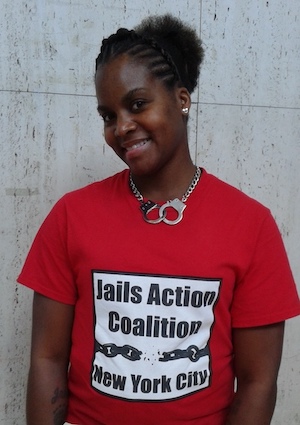 Candie Hailey after a Board of Correction meeting in October 2015. (Photo: Victoria Law)

Once, after being refused sanitary napkins while menstruating, she tore apart a jumper to create makeshift pads. She received a ticket and more time in isolation. (In 2016, New York City passed a law requiring public schools, jails, and homeless shelters to provide free menstrual products. Previously, women at Rikers had to ask officers for pads.)12

Conditions were so terrible that she attempted suicide on a near-daily basis, usually by attempting to slash her wrists, she said. The first time, she recalled, was when the toilet in her cell broke and staff moved her to a cell where a woman had broken the light fixture and used a shard of glass to slash herself. “They moved me into her cell with broken glass all over the floor,” she recalled. “They said, ‘Just don’t cut yourself.’ I picked up the glass that they left for me and I cut myself.” After that, Hailey cut herself with anything that she could get her hands on—pencils, pens, forks, pieces of a plastic cup she broke for that purpose.13

Each time she cut herself, officers wrote her a disciplinary ticket, extending her stay in isolation. “I wanted to get out of there any way I could,” explained Hailey, who converted from Baptist to Catholic while in segregation. “I know suicide is a sin and you go to hell, but I was already in hell and God would have understood that I had to get out of there.”14

That’s not unusual. A study by The American Journal of Public Health found that in New York City jails, those who had been in solitary confinement were 6.9 times more likely to commit acts of self-harm.15

Hailey spent more than three years in isolation before being acquitted at trial in May 2015.16

Even after a person is freed, the years in isolation continue to take their toll. “I was stuck in a cell for three years with no mobility,” she explained. “I had to relearn to walk. I can’t walk far distances. I can’t stand for too long. I had to relearn how to talk.” The Journal of General Internal Medicine found that people in solitary had a 31 percent higher rate of hypertension than those in the general prisoner population (or non-solitary housing).17

The Department of Correction said it had no public record of Hailey’s being in its custody during that time, though the Bronx district attorney later filed charges against her for breaking a chair while at Rikers.18

But Jennifer Parish, director of criminal justice advocacy at the Urban Justice Center and a member of the Jails Action Coalition, confirmed that Hailey had been confined—and isolated—at Rikers between 2012 and 2015. Parish helped advocate that Hailey be moved from isolation to a mental health unit, even enlisting Dr. Terry Kupers, a national expert on mental illnesses behind bars, to review her file and issue a recommendation to remove her from isolation.19

City and State Law Prevent Bringing Back the Box

In recent years, the board has implemented rules limiting solitary confinement—in 2015, after the jail complex reached a daily population of 567 people in solitary the previous year, it passed a rule limiting punitive segregation to a total of 30 days (later amending it to 60 days for assaults on staff) and excluding 16- and 17-year-olds from isolation altogether. The new rule came too late for Hailey who, by then, had spent more than two years in segregation.22

In June 2021, the Board issued a rule replacing punitive segregation with a risk management assessment system, which guarantees that people will be allowed out of their cells at least 10 hours with some form of socialization, during which they cannot be shackled. That rule was to take effect in November 2021.23

On November 1, however, citing chronic staff absenteeism, then-Mayor de Blasio signed an emergency executive order putting the new rule on hold. Adams’s office renewed that executive order on January 4. When asked for more detail, the Department of Correction said it would have more information in the coming weeks. As of January 10, the DOC held nine people in punitive segregation.24

Victoria Law and The Nation

Once the rule goes into effect, the Department of Correction can apply for a six-month variance, which must be granted by a majority of board members. Overturning a rule is a lengthy process—a majority of board members must vote to propose a new rule, allow the public at least 30 days for written comment, hold a public hearing, and, at another hearing, amend and vote on the rule.25

On the state level, in April 2021, then-Governor Andrew Cuomo signed into law the HALT Solitary Confinement Act, limiting segregation to no more than 15 days. HALT also prohibits solitary for those under age 21, ages 55 or older, people with disabilities, and those who are pregnant or postpartum. The law, which applies to local jails and state prisons, goes into full effect in March 31, 2022. Kathy Hochul, then lieutenant governor, tweeted her support for it, stating, “Prolonged solitary confinement is wrong, and makes prisons, jails and outside communities less safe.”26

Bringing back the box isn’t Adams’s only rollback to jail reforms, however. Three days after taking office, Commissioner Molina fired the head of investigation, Serena Townsend, who has investigated the jail’s backlog of staff use-of-force complaints. He also eased the requirement that officers utilizing paid sick leave be examined by a doctor.27

Hailey is horrified by Adams’s pledge to continue solitary. “I believe there will be more suicides and suicide attempts,” she predicted. For those who survive, the effects linger. She continues to be plagued by nightmares and has recurring thoughts of suicide and self-harm.28

That’s not unusual. The Journal of the American Medical Association found that people who spent any amount of time in solitary were 78 percent more likely to die by suicide in their first year than formerly incarcerated people who had never been in segregation.29

Now, fighting to end solitary gives Hailey purpose. She joined the Jails Action Coalition, a coalition of activists working to improve conditions in the city’s jails. She has testified repeatedly at Board of Correction meetings about the long-term damage inflicted by solitary.30

“You go in there with sense. And you come out with nothing,” she reflected.31

Melania Brown agrees. “My sister didn’t make it back to me in one piece. She’s in ashes now.”32