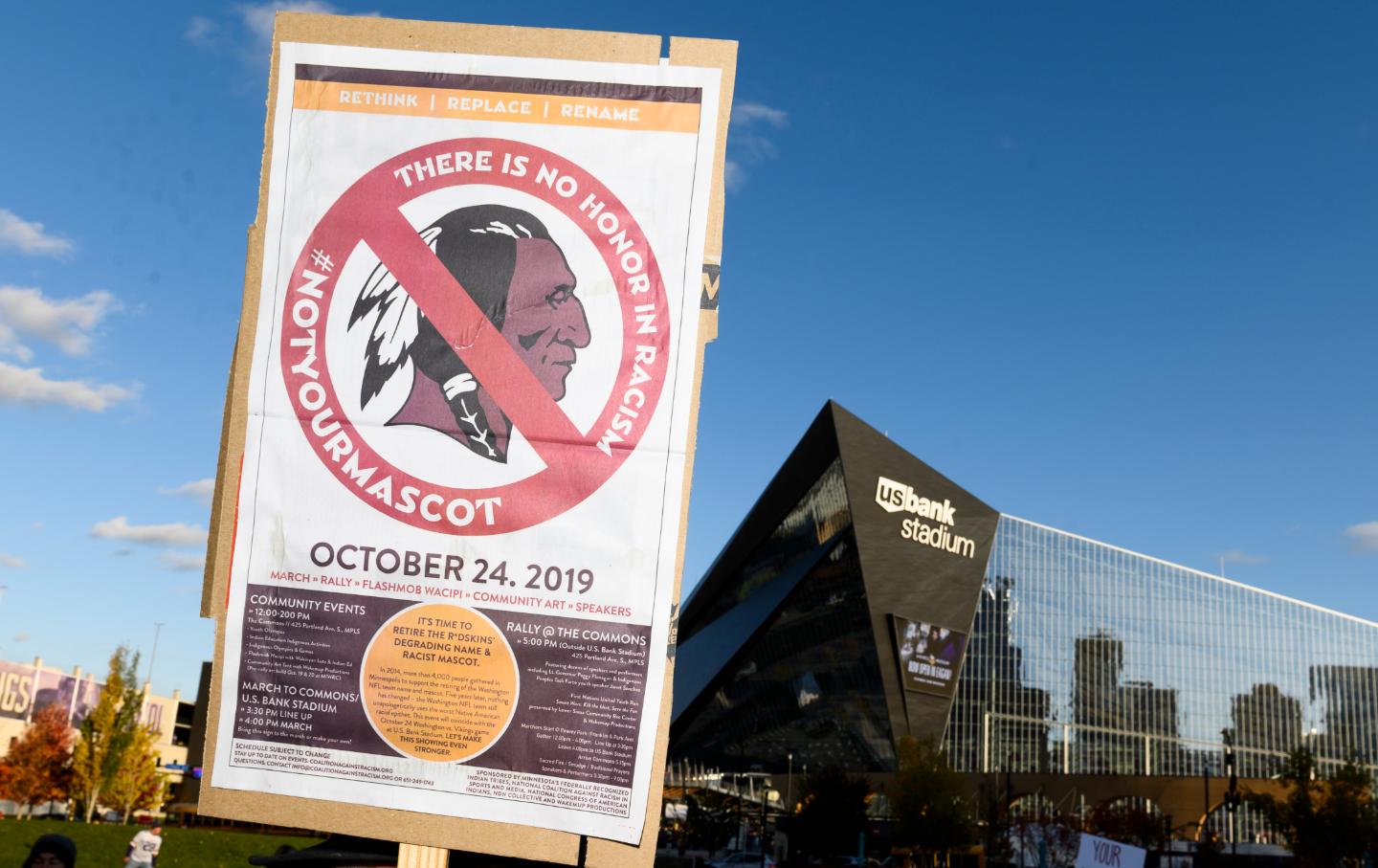 Outside US Bank Stadium before a game between the Washington Redskins and Minnesota Vikings in October of 2019 in Minneapolis. (Stephen Maturen / Getty)

Roger Goodell wants the public to think he is sincere about fighting racism in the NFL. He has now said that the league was “wrong” to discourage political protest in the recent past. He announced that the NFL will pledge $250 million over 10 years to racial justice causes (that works out to about $700,000 a year per team, basically coins in the cushions for this multibillion-dollar behemoth of a sports league). Yet there is one thing that Goodell could do right away to show that he will address the blind spots that have marred his tenure as commissioner: call for a new name for the Washington football team.

Currently a racial slur that adorns the NFL team in Washington, D.C., the name’s history is drenched in bloody racism, genocide, and a tradition of white supremacist ownership.

Back in 2010, when the Washington football team was led by star rookie quarterback Robert Griffin III, games were briefly must-see TV. I said that I thought the name would be changed within five years. Wow, was I wrong. I thought RGIII would bring the team to new heights and with that would come national scrutiny that this brand could not endure. But RGIII got hurt and the team has been mired in mediocrity ever since. This has saved them from outrage on a national scale, until now.

We are living in the midst of a national uprising against racism. Statues are being toppled. There’s nowhere to hide. The name must change. Team owner Dan Snyder might not like it. And Goodell might be too scared to confront the right-wing, Trump-funding cabal that owns most NFL teams, but the time is now. Goodell could show his sincerity by turning toward ownership and showing some courage and leadership—though those have not exactly been hallmarks of his tenure.

I reached out to Suzan Shown Harjo, a person of Cheyenne and Muscogee descent who is president of the Morning Star Institute, a national Indigenous rights organization in D.C. Harjo has been on the front lines of the battle to change the name for decades.

She said, “This is a mighty time of change and action. More and more people are opening their minds and hearts to demands for justice and accountability, to condemnations of bigotry and brutality and all their symbols. The pandemic has heightened both exasperation and contemplation, forcing some to conclude that now is the time to act on solutions long identified to problems too long debated—racism in law and order systems, white supremacy in statuary and brands, Aunt Jemima, Uncle Ben, Chief Wahoo, and the ‘Indian’ butter maiden. If ever there were a moment to consign R*dsk*ns to history, this would be it. The vile name and stereotypical logo are a national affront because of their proximity to governmental power. Continued use and celebration of that race-based slur sends a worldwide signal that state-sponsored skinning of our ancestors by bounty hunters was OK because white folks needed land to own in our countries. This ongoing commodification and objectification is, at the same time, protective colorization for and contributing factor to the murders and other forms of savage violence against Native peoples today.”

In addition, D.C. Mayor Muriel Bowser has now adopted a much stronger position regarding the team’s moving back from suburban Maryland to Washington, saying a name change would be a prerequisite. “I think it’s past time for the team to deal with what offends so many people,” Bowser told Team 980 radio. “This is a great franchise with a great history that’s beloved in Washington, and it deserves a name that reflects the affection that we’ve built for the team.”

The person who bestowed this slur on the team was the original owner, George Preston Marshall, a proud white supremacist who dreamed of keeping the R*dsk*ns white. Under his leadership, Washington was the last team to integrate, when it signed the recently deceased legend Bobby Mitchell. It would be difficult to think of a greater tribute to Mitchell and what he endured as a team trailblazer than to tear down the statue of Marshall that stands outside the team’s old home RFK stadium and erect one of Mitchell. Frankly, that should have happened years ago. It’s past time for Goodell to show some leadership. It’s past time for him to cease his performative anti-racism and actually pledge something that shows he understands that we need to turn the page on this current period in history. That means tackling the most visible expression of racism in the National Football League and, finally, at long last, changing the damn name.