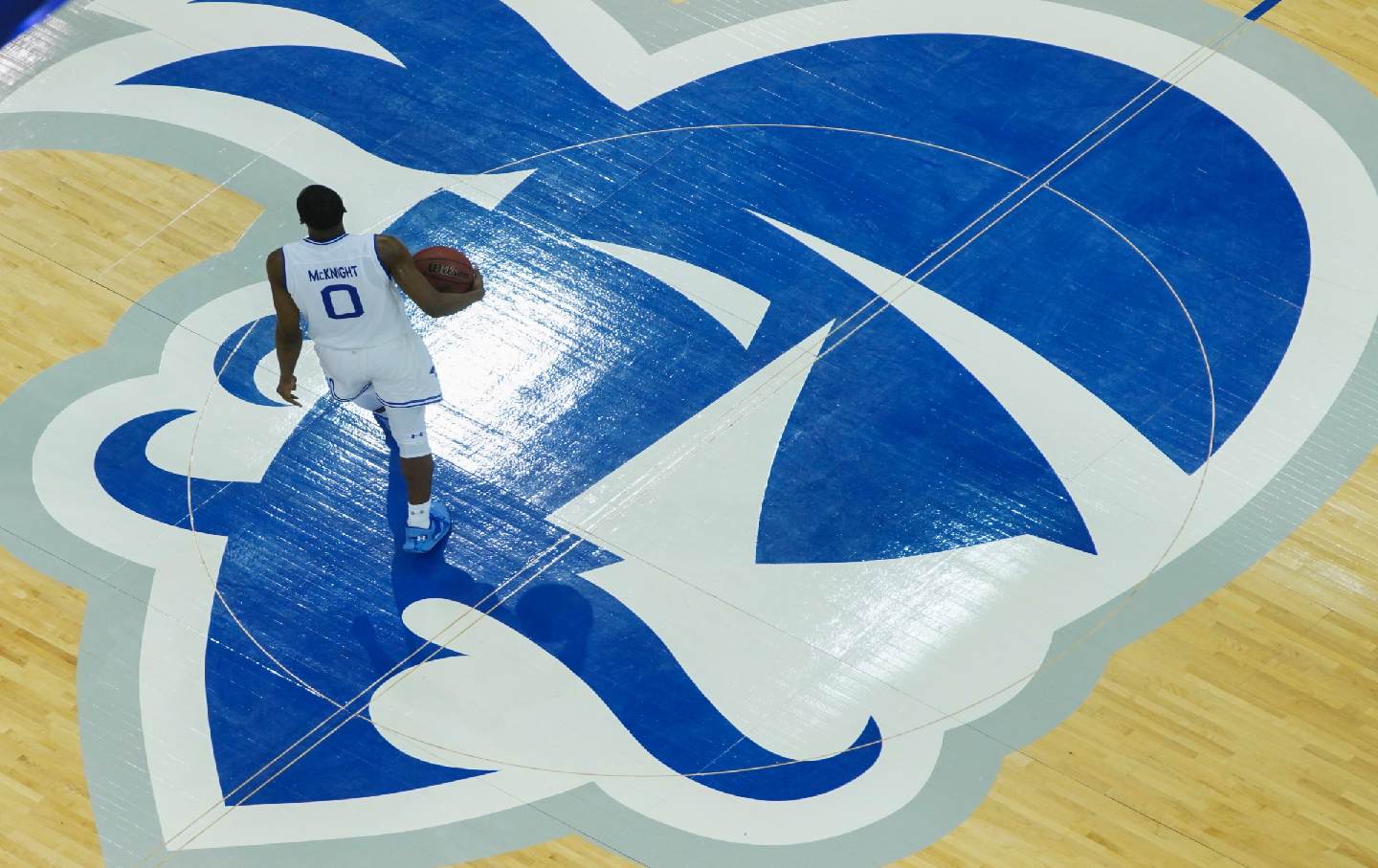 Quincy McKnight of the Seton Hall Pirates during a game at Prudential Center in February of 2020 in Newark, N.J. (Porter Binks / Getty)

There are certain facts that critics of the college sports model have been pointing out for eons. One is that two sports—football and men’s basketball—generate most of the revenue that underwrites athletic departments and pays for coaches’ multimillion-dollar salaries. These two sports in particular are dependent on Black players and the physical punishment of Black bodies. And while these athletes produce billions of dollars in wealth, they not only do not receive any income but also have no collective bargaining rights, long-term medical care, a guaranteed scholarship, or even a seat at the table to discuss these issues.

It’s both hyper-exploitative and immoral. And a new study puts an even finer point on the issue, making the case that these sports not only create the revenue that supports the entire athletic department but also subsidize athletic endeavors dominated by white, economically privileged athletes, like sailing, crew, and tennis.

The study, from the National Bureau of Economic Research, is a damning indictment of the current caste system. Through a forensic investigation it found that revenue from athletic departments has nearly doubled from $4.4 billion to $8.5 billion over the last 14 years. Sixty percent of that growth is due entirely to football and men’s basketball. Football staffs have seen their salaries double, as have non-coaching administration jobs in these athletic departments. And these sports subsidize the amateur sports for the country club set. As we’ve seen from the recent Felicity Huffman and Lori Loughlin admissions scandals, these upper-crust sports are often used to justify admissions of the children of underqualified rich donors, an athletic loophole for a different kind of highly corrupted, off-the-books “affirmative action.”

What makes this report particularly timely—and particularly dangerous for the powers that be—is that college athletes in these revenue-producing sports have never been more confidently outspoken, particularly on issues of racial justice and health and safety, than in the age of Black Lives Matter and Covid-19. While these athletes have been making an array of demands, they’re united in their desire to take charge of their own destiny and have a voice that is commensurate with their importance to the university.

Clemson quarterback Trevor Lawrence, who is white with long hair and a faraway look to his eyes (in other words, not your typical quarterback), even issued a five-point plan for racial justice this week. In addition to calls to register college athletes to vote and for the right to wear political decals on their helmets, Lawrence tweeted,

Over the course of the past year, our country has witnessed some of the most atrocious racial injustices against countless Black and African-American people. Too many have fallen victim to racial injustice and system inequities. Enough is enough. Real change must come.

The NCAA is attempting to respond to these rumblings for racial justice through actions that are more performative than concrete. Players from the University of Mississippi and the University of Alabama marched with their coaches in Black Lives Matter processions in Oxford and Tuscaloosa, respectively. While it was most certainly stirring to see Alabama head coach Nick Saban at the front of a march for racial justice, these kinds of processions can only release so much steam. Voter registration and helmet decals, with all respect to Trevor Lawrence, also don’t challenge the fundamental injustice laid out in the study: that is the injustice of fake amateurism.

Black athletes—who disproportionately come from poor backgrounds—can no longer be the cash cows for squash and golf and the playgrounds of the privileged. I’m not saying I have the answers, but I think the solution resides somewhere in the doubling of salaries for coaches since 2006. If there is money for coaches—and currently the head football or basketball coach at the state college is the highest-paid public employee in 40 of the 50 states—then there should be compensation and a seat at the table for the athletes as well. Otherwise, the NCAA will just continue to be what it has been for decades: a machine to facilitate the organized theft of Black wealth.