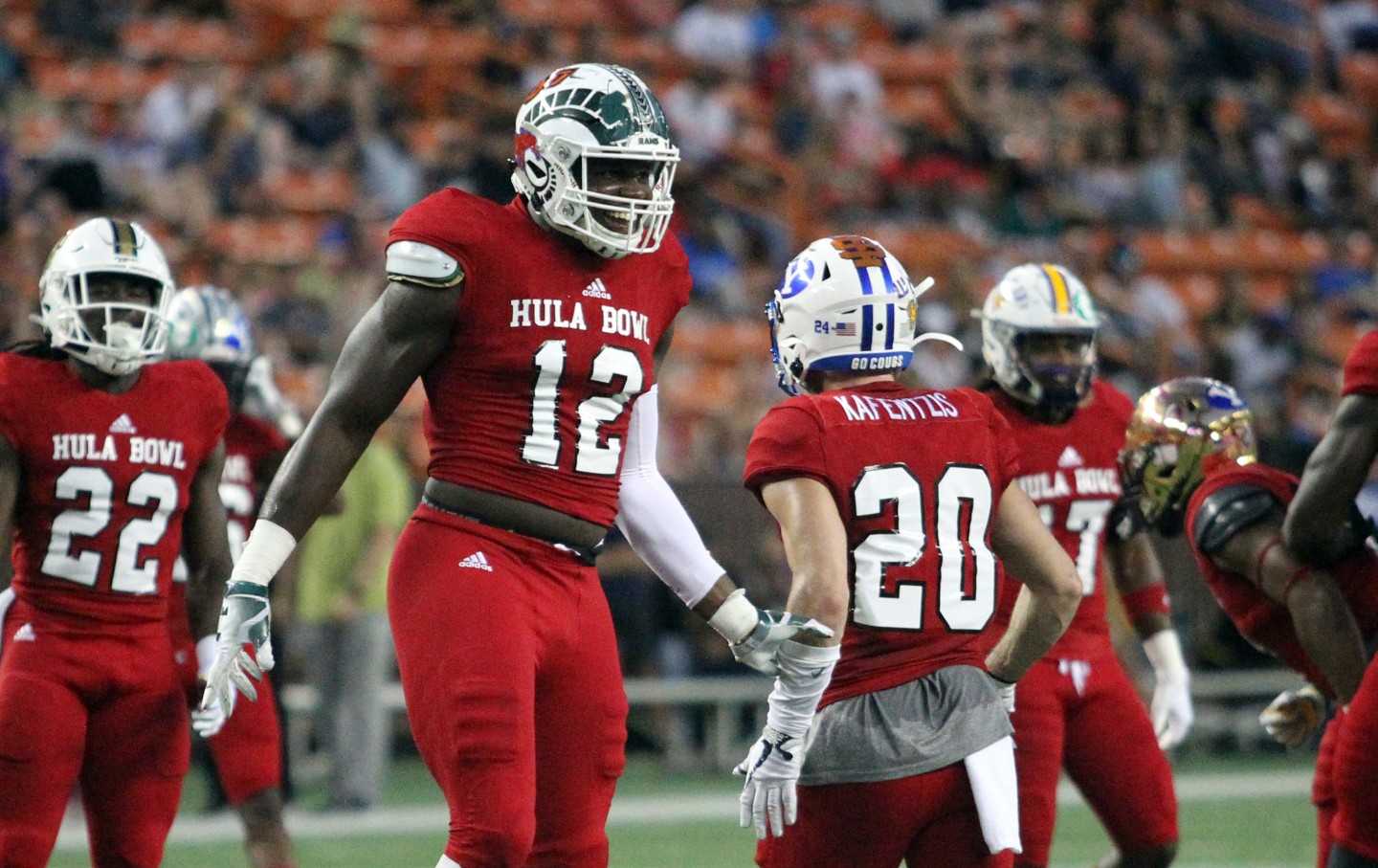 No one should expect college football to come roaring back this fall. If classes aren’t back in session, football players won’t be taking the field. This isn’t because the optics of “student athletes” putting their health at risk while being unable to matriculate as students would be horrific. The NCAA has never given a solitary damn about optics, being as shameless as Laura Ingraham after going on a bender of bleach. Instead, there won’t be college football in autumn because the NCAA’s revenue—unlike the NFL’s, whose billions are tied to their broadcast deals—comes overwhelmingly from ticket sales, and there is no way 100,000 people will be gathering in close proximity at the Horseshoe by August.

It is fitting, however, that right when it is clear that no football will played, the NCAA looks poised to finally, at long last, allow players to sell their name, image, and likeness as soon as next year. This will allow athletes to be paid as sponsors for products, previously a verboten concept decried as sacrilege to the “amateur” model. If these rules are adopted, “student athletes” will finally be free to operate in the commercial world like the rest of us. That means that if they want to be able to hold a paid quarterback clinic for kids, they can do that. If they are asked to shill for a local car dealership, they are free to shill away.

Critics of this plan have said that it will allow a small group of powerful schools to hook high school players up with the best side deals, totally throwing the competitive balance of college football out of whack. This is an absurd argument. In the first round of Thursday night’s NFL draft, almost half the players picked, 14 out of the 32 top picks, either attended Alabama, Clemson, LSU, or Ohio State. In other words, there already is no competitive balance. The arguments sound strikingly familiar to what people said about free agency in professional sports in decades past: that it would wreck the competitive balance. In reality, it did the opposite. It produced more parity and less of a system where dynasties dominated and most teams were left without a shred of hope.

The NCAA, of course, is doing all of this because California passed and signed legislation last year giving athletes the right to profit off of their name, image, and likeness. Other states looked to be following suit, and there was talk of federal intervention as well. NCAA President Mark Emmert and his army of lawyers saw the writing on the wall and have since been trying to get ahead on this so they could pass their own guidelines and requirements. For example, no athletes, according to sources, could enter an agreement with a company that is in competition with an official sponsor of the college. No Adidas deals if you go to a Nike school.

Also, according to a source who spoke to the Associated Press, no school apparel could be branded with an ad for a company not in partnership with the college. Athletes would also have to disclose all deals to their athletic departments. This way, the NCAA can at least keep some modicum of power over the earning potential of its athletes. It is also able to hold back the argument that strikes to the heart of its power: the idea that athletes should not only be able to profit off of their name, image, and likeness, but also should be able to receive a cut of the billions of dollars in revenue that their blood, sweat, and tears produce.

But as cynical as this process has been, it’s a win for the athletes and it strikes a blow at the NCAA. Mark Emmert and his cartel is ceding the argument that these young people are a critical reason people go to the games and buy the merch. They deserve to be able to profit off of their exploits as students, just like any other student on campus.

It will be important to keep the pressure up, so it’s not only the stars that are able to benefit but every athlete who produces revenue. For too long, the NCAA has stolen predominantly black wealth for the benefit of coaches and administrators. That imbalance still needs to be corrected, but this is a step toward a measure of justice and freedom, where before none existed.