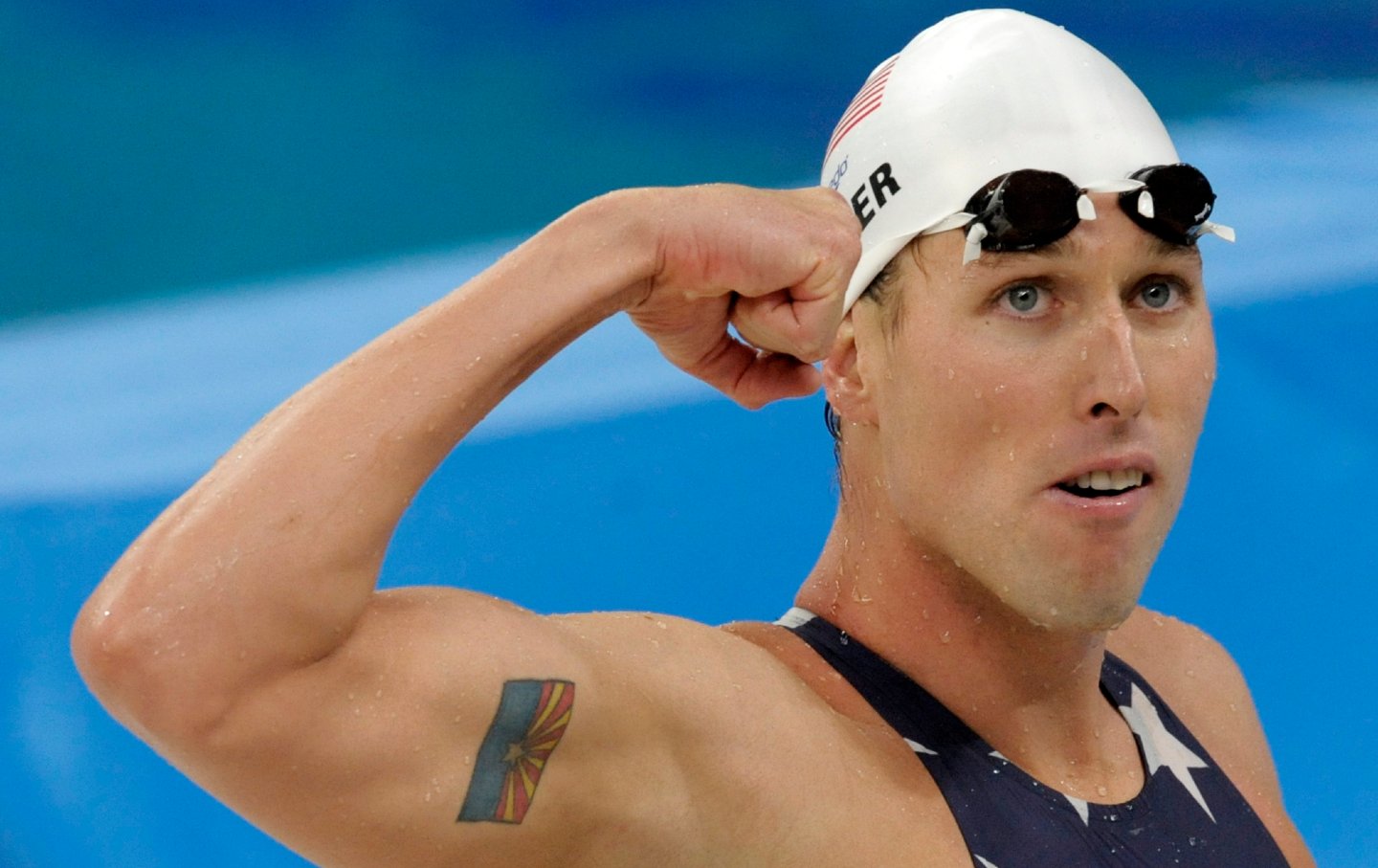 Klete Keller reacts after a swimming competition at the 2008 Olympics in Beijing. Keller was charged with participating in a deadly riot at the U.S. Capitol. (Thomas Kienzle, AP Photo)

An Olympic medalist, his United States Olympics red, white, and blue team jacket worn with pride, was part of the fascist mob that marauded through the Capitol building last week. His name is Klete Keller, a swimmer who medaled at the 2000, 2004, and 2008 Olympics, including winning golds. Keller wasn’t just a passive observer. He has been indicted in US District court for his part in the attempted insurrection.

When it comes to racism, sexism, hyper-nationalism and class privilege, the International Olympic Committee requires a walk-in closet for all its skeletons. Baron Pierre de Coubertin, the French aristocrat who revived the Olympics and served as the IOC’s president, often proclaimed that “the Olympic Games must be reserved for men.” In 1923, when arguing for the inclusion of African nations, he emphasized that doing so would counteract the “laziness,” the “resentments,” and “thousand jealousies of the white man” that were “troubling the African soul.” Later, when IOC president J. Sigfrid Edström experienced pushback from activists for allowing Hitler to host the 1936 Olympics, he bleated, “All the Jews in the whole world are attacking us.” In the 1960s, IOC President Avery Brundage was not only a full-throttle anti-Semite but was also known as “Slavery Avery” for his anti-Black racism. Juan Antonio Samaranch, who ran the IOC from 1980 to 2001, was an unrepentant Franco functionary who did not shy away from an old-fashioned fascist salute. Today, the organization is run with an iron fist by Thomas Bach. When asked why he was so slow to postpone the Tokyo Games in face of the coronavirus, Bach said he was only looking to Donald Trump, who thought coronavirus restrictions could be lifted by mid-April.

Today, the Olympics are a wheezing behemoth, spewing warmed-over pixie dust from brighter days. Just look to Japan where the postponed Tokyo 2020 Games have become political plutonium: one recent poll found that 80 percent of the public wants to either cancel the Olympics or postpone them again. The Beijing 2022 Winter Games sit just down the five-ring pike, while in China the government’s treatment of ethnic Uighur Muslims in Xinjiang Province and its brutal crackdown on dissent in Hong Kong clang loudly against the lofty principles enshrined in the Olympic Charter. Seeing a US Olympic Team jacket prance through the Capitol Rotunda makes some sense against this backdrop of disaster and autocracy.

Then there is the hypocrisy of how the Olympics views politics. There is the infamous Rule 50, now opposed by the US Olympic and Paralympic Committee, which punishes athletes for expressing their politics on the medal stand. They sanctioned hammer thrower Gwen Berry and fencer Race Imboden for raising a fist and taking a knee at the Pan Am Games. Yet the kinds of politics that proved fertile ground for Klete Keller are not only permitted—they are foundational. People around the world are dying so the Olympics can make a killing. Meanwhile, here in the United States, people are suffering so that aggrieved white Trumpistas like Keller can pillage almost at will.

To be sure, it sounds like Keller has experienced some significant struggles in recent years: homelessness, divorce, a lack of access to his kids. Like many US Olympians, returning to civilian life after experiencing the heights of sporting prowess can be a challenge. Hopefully he can not only get the help he needs but also come to realize that Trump’s bankrupt worldview does not arrive with the keys to redemption.

Many of those who invaded the Capitol building are facing federal charges, ranging from unlawful entry and theft to assault and weapons violations. Federal prosecutors are reportedly considering seditious conspiracy charges as well. Whether Keller will be charged is an open question at this point, but one thing is for sure: Like Trump, the Olympics are a many-headed Hydra of problems. Neither Trump nor the Olympics abide by ethical metrics that point toward justice. Both are sugar highs, and here comes the crash.