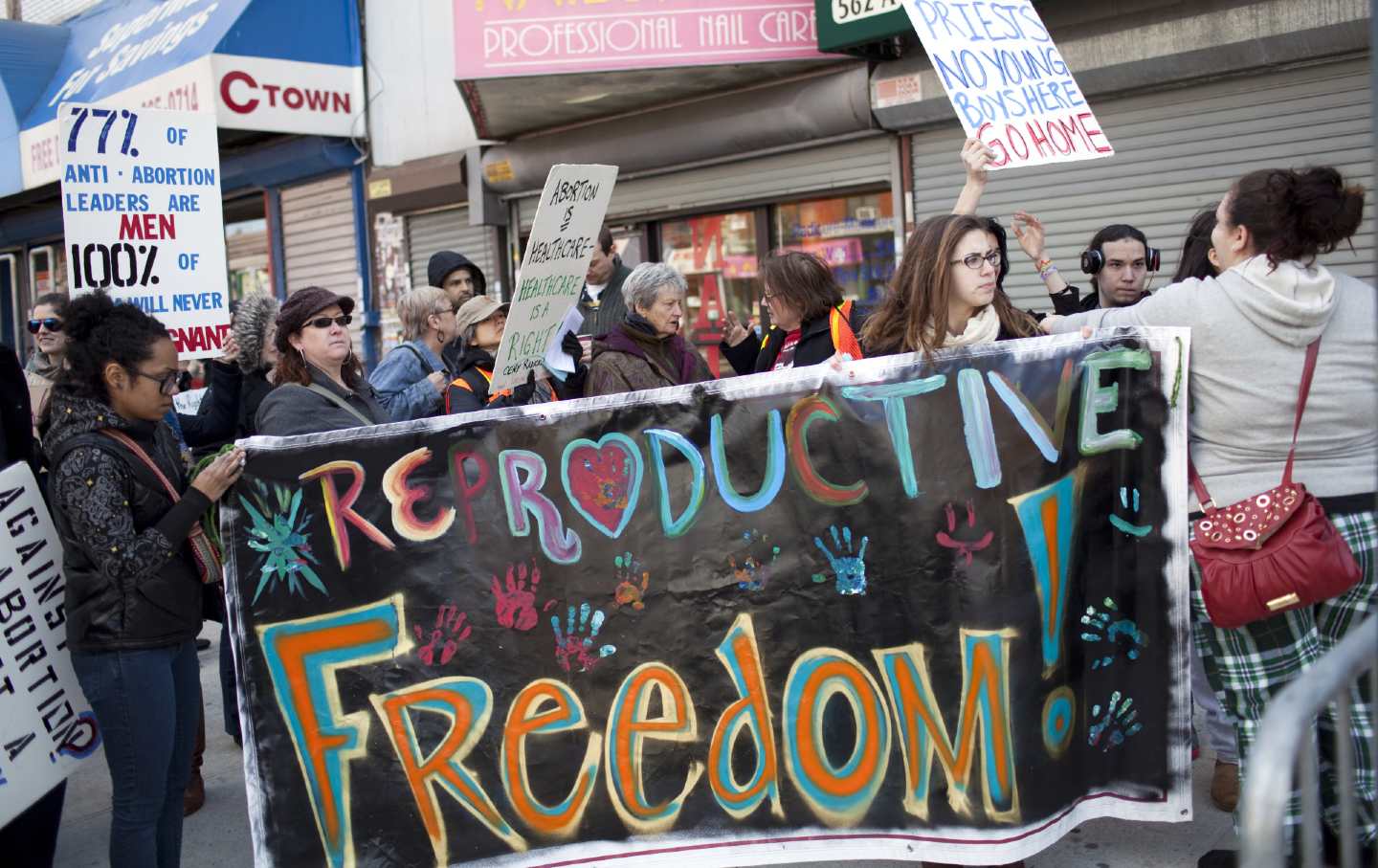 Supporters of women's right to have an abortion line the sidewalk outside the Dr. Emily Women's Health Center in 2011. (Robert Nickelsberg / Getty Images)

It’s been a while since supporters of abortion rights have had anything to celebrate. States have enacted a staggering 69 anti-abortion bills this year alone, including nine bans. The Supreme Court has agreed to hear a case on Mississippi’s 15-week ban that is likely to upend Roe v. Wade entirely. But on the eve of Memorial Day weekend came a victory that was decades in the making: President Biden struck from his budget the 45-year-old ban on federal funding of abortion known as the Hyde Amendment.1

The ban forces Medicaid patients in most states to raise money to pay for their abortions or—as happens in one out of four cases—to stay pregnant because they can’t. Biden is the first president since Bill Clinton to issue a budget without the ban. In the years after Roe, right-wing forces moved quickly to make abortion as inaccessible as possible, even as it remained legal. The Hyde Amendment was part of that strategy. As restrictions mounted, the mainstream pro-choice movement went on the defensive, focusing on preserving the legal right to abortion, although Black women noted that, because of Hyde, that right could never be fully realized. 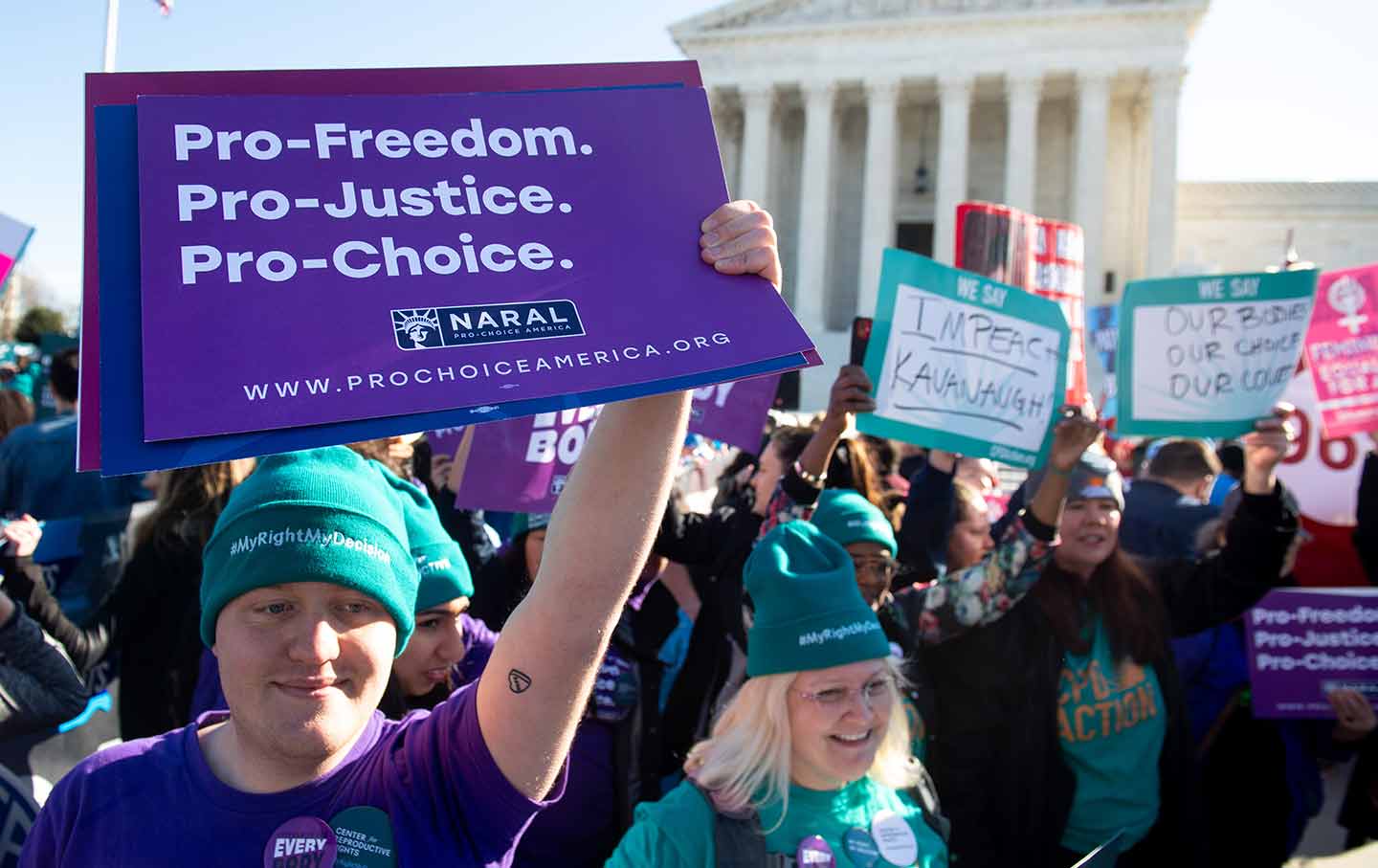 Democrats Must Take Charge of the Debate About Abortion

Tensions surrounding the ban came to a head in 1978, when Faye Wattleton became the first Black president of Planned Parenthood. She took aim at Hyde as part of a sweeping vision that she hoped would put the organization on the offensive. But Wattleton soon faced an uprising from within the group’s affiliates. “The concerns were that we were going to lose our federal funding if somebody didn’t get me under control,” she told The Nation in 2019. Wattleton weathered the storm and remained in her position for 14 years. But in the 1980s, with attacks on reproductive health care proliferating, the abortion rights movement focused on “choice” rather than access. “These were strategic decisions, taken with the belief that this approach would appeal to the broadest constituency of voters,” Marlene Gerber Fried wrote in the book Radical Reproductive Justice. Black women organizers, meanwhile, mobilized around a broad range of issues related to their health, forming the National Black Women’s Health Project, which would go on, in the early ’90s, to launch a nationwide campaign to repeal Hyde. In 1993, President Clinton omitted Hyde from his budget, but the anti-abortion Democrat in charge of the House Appropriations Committee, Representative William Natcher, soon reinstituted the ban. The campaign against Hyde did succeed, however, in restoring the ban’s exception for victims of rape and incest. “Black women insisted that Hyde would provide a slippery slope to undermine abortion rights and healthcare,” Loretta J. Ross stated in Radical Reproductive Justice. “History has proven our point.”2

It has taken almost 30 years for the movement to succeed in pressing another Democratic president to remove Hyde from his budget. During those years, reproductive justice activists have raised money to fund abortions themselves, while successfully persuading the mainstream movement to make the issues of access and affordability central.3

The victory is all the more remarkable given its target. Biden has long been among the more conservative Democrats on abortion. He supported the Hyde Amendment until 2019, when it became clear that he was fast becoming an outlier among Democratic primary candidates. That Biden has shifted his position says less about him than it does about the power of the movement that forced him to do so. Since its launch in 2013, the reproductive justice group All* Above All has built a coalition of 130 organizations that oppose the ban as an issue of racial and economic justice. The Black Lives Matter and reproductive justice movements have combined to make support for Hyde a political liability for Democrats. Representative Rosa DeLauro, who convened a hearing on Hyde within days of becoming the Appropriations Committee chair, has promised to omit it from the House spending bill. In the Senate, pro-Hyde Democrats will likely ensure that it remains in place. But even there, All* Above All has been gaining support for the EACH Act, which would lift federal abortion coverage restrictions.5

“We started where we thought we’d be lucky if we had 40 people on a bill at introduction,” said Destiny Lopez, copresident of All* Above All. “We now have 155 people in the House, 27 in the Senate. So it’s a marathon, not a sprint.”6