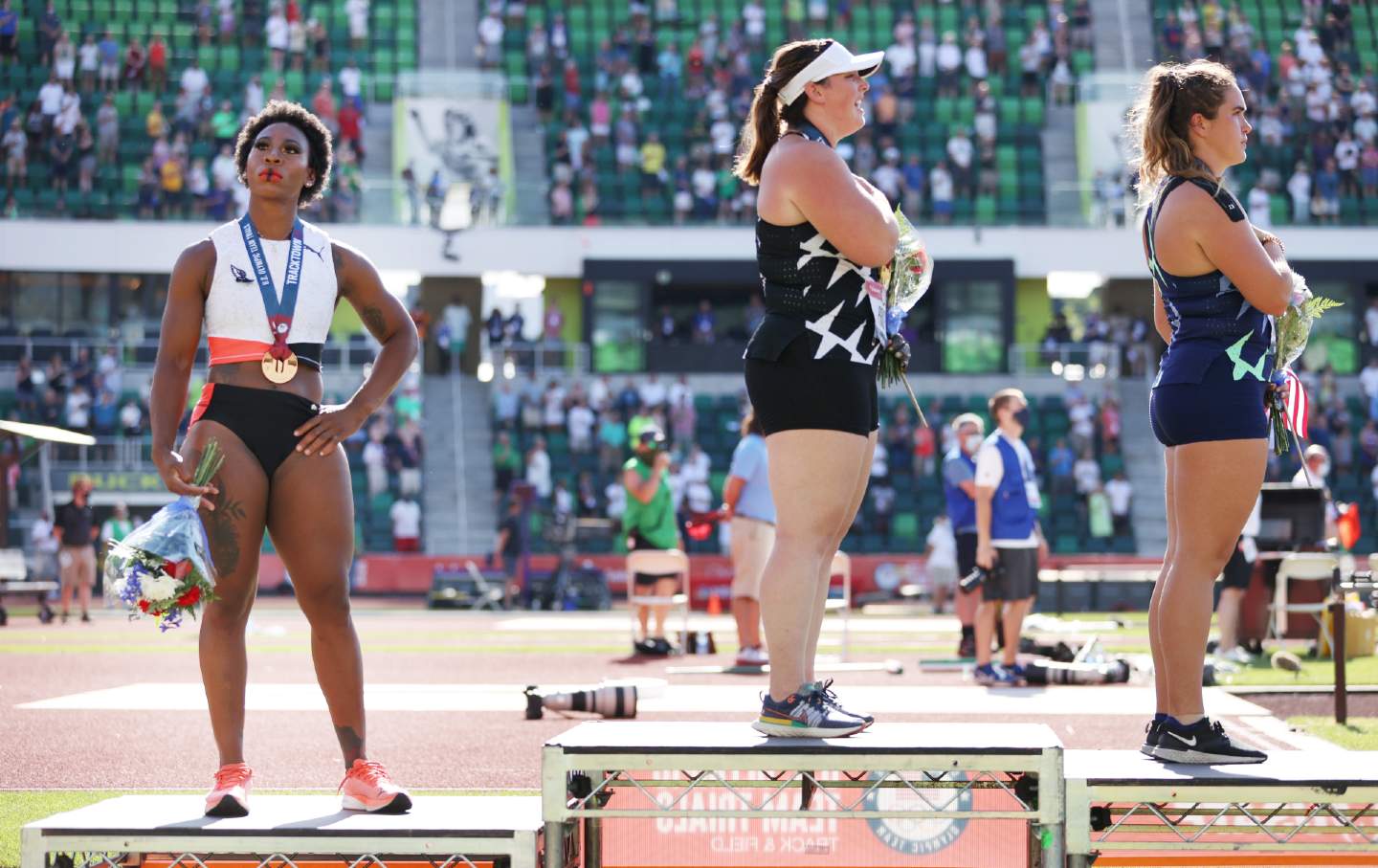 Gwendolyn Berry looks on during the playing of the national anthem after the Women's Hammer Throw final during the 2020 US Olympic Track & Field Team Trials. (Patrick Smith / Getty Images)

The Republican Party and its online minions have picked the wrong Black athlete to demonize. After hammer thrower Gwen Berry made it to the upcoming Summer Games, finishing third in the US Olympic Trials, she did not stand at attention for the national anthem after taking the medal stand. Instead, she turned from the flag, faced the stands, and then draped a T-shirt that read “athlete activist” over her head in protest. She did this as a spontaneous and surprised response to the anthem being played, something that did not happen during most the other medal ceremonies. (These are the US Olympic trials, not the games, and the anthem is rarely played.) She said, “I feel like it was a set-up, and they did it on purpose. I was pissed, to be honest.”

She later explained her latest medal stand protest by saying, “I never said that I didn’t want to go to the Olympic Games. That’s why I competed and got third and made the team, I never said that I hated the country. I never said that. All I said was I respect my people enough to not stand for or acknowledge something that disrespects them. I love my people. Point-blank, period.”

In other words, this is the same Gwen Berry with whom you do not want to mess. When Rep. Dan Crenshaw practically broke an Olympic record sprinting onto Fox News this week to call for Berry to be expelled from the Olympic team, he was following a very old script in regards to how Black rebel athletes have been demonized for more than a century for daring to do more than entertain.

In the Fox universe, Crenshaw’s using his platform as a member of Congress to chill someone from speaking out against racism is seen as just fine, but a Black woman using her platform to speak her truth must be silenced at all costs. The sadly too-often effective “shut up and play” strategy is an ugly, tired game, and Gwen Berry isn’t having it. She has taken to Twitter to mock Fox News, Crenshaw, and all the assorted dirt-merchants putting dust on her shoulder—dust that she is casually flicking off with a roll of her eyes.

Berry’s fearless example is crucial well beyond the world of sports. We are living through a reactionary backlash against teaching or even discussion about systemic racism in this country. Following the massive demonstrations of 2020 after the police murder of George Floyd, authors, activists, and athletes spoke out about the realities of systemic racism. Now we are drowning in a desperate revanchist white supremacy arm-in-arm with the Republican Party that aims to literally outlaw these discussions.

Unable to compete in the vaunted “marketplace of ideas” and facing a young generation more demographically diverse and less tolerant of intolerance than any in US history, they are trying to smother this anti-racist zeal by means legal and, if necessary—judging from these almost irredeemably ignorant, rage-soaked school board protests—violent. Teachers are resorting to signing petitions pledging to teach the truth about the history of this country. That is where we are in 2021.

We have seen this dynamic writ large in the sports world: an effort to reassert hierarchy and wealthy white control, after a year of protest and what was often a commodified form of dissent. Whether we are talking about the “official channels” of threatening tennis player Naomi Osaka with banishment for challenging post-game interviews or the spasms of fan attacks on players during the NBA playoffs, the message has been simple: Know your place or face the consequences.

The attacks on Gwen Berry must be understood in this context. Yet Crenshaw, the execrable Ted Cruz, Fox News, and all their assorted minions picked on the wrong person in focusing their attacks on Berry. Now ready to go to Tokyo, the next question will be whether she takes her moral imperative and challenges the International Olympic Committee’s infamous Rule 50, which bars athletic protest. The IOC has even singled out the words “Black Lives Matter” and said explicitly that they must not be worn on any fields of play. Whether Gwen Berry takes on that rule or not, she has already shown the sports world and the real world how to respond to attacks and efforts to silence dissenters: you respond with fearlessness and you don’t back down to bigots and bullies. That’s the raw truth, as Berry might put it, “point-blank, period.”