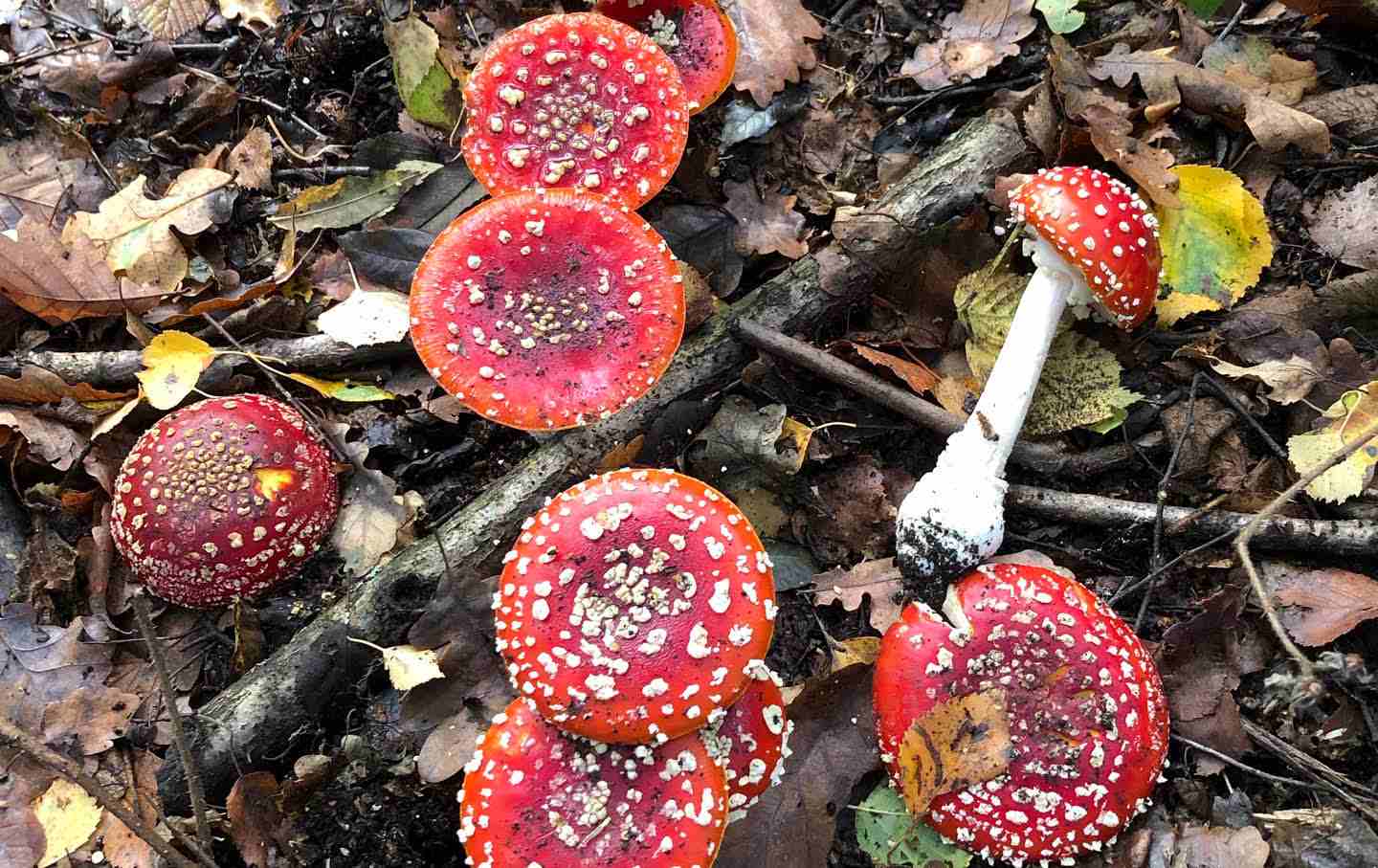 ‘If You Want to Make the Gods Laugh, Tell Them Your Plans’

‘We Won’t Quit Until We Stop It’

I live on the edge of a wild London park, so big that after a lifetime of wandering there I can still get lost in its woods. My housemate is a senior hound of stubborn habits and profound emotional intelligence. Together we walk every morning, rain or shine; this is my sanity in the long season of uncertainty. I alternate between looking up at the trees and down at the packed dirt paths and layers of fallen leaves. For years I’ve searched for shards of broken china—flashes of blue or pink against the grey, debris from Victorian middens used to fill the ground. Now I look for fungi too. As darkness presses hard against our flimsy human arrangements, I find their quiet persistence, their getting on with it, comforting.

Mostly they come in shades of white or beige or gray. Pale tentacles poke out of rotting stumps; dull frills edge fallen logs; white domes like flying saucers lurk under the grass. But today, in the woods, the dog and I discovered a spreading patch of amanita muscaria, or fly agaric—the bright red, white-spotted toadstools native to fairyland. They took my breath away: their unlikely brightness pushing up through dead leaves, the presence of something I’d associated only with the world of imagination.

I’d also always thought that they were deadly poison—a loud scarlet warning. In fact, in measured quantities they are hallucinogenic. (They will also make you very, very sick.) The first mushroom known to produce visions in the West was not the fly agaric but psilocybe semilanceata, the common liberty cap, so named by Samuel Taylor Coleridge for its resemblance to the Phrygian cap worn by the sans-culottes of the French Revolution. But it was the flashier (and more dangerous) fly agaric, encountered in Kamchatka by a Polish traveler named Joseph Kopek around 1797, that penetrated European folklore and became the official mushroom of Victorian phantasmagoria, a parasol for elves and pixies in children’s picture books, the kitsch accoutrement of garden gnomes in the fantasyland of suburbia.

The dog didn’t deign to sniff my fly agaric patch; probably just as well. But those toadstools spoke to me of things that seem especially precious on this weird Halloween, as the pandemic rages across Europe, and our incompetent, blustering, disconnected disaster of a prime minister announces a four-week lockdown too late to save thousands of lives: imagination, risk, rebellion, wildness, mystery; dangerous beauty erupting from the darkness underground.