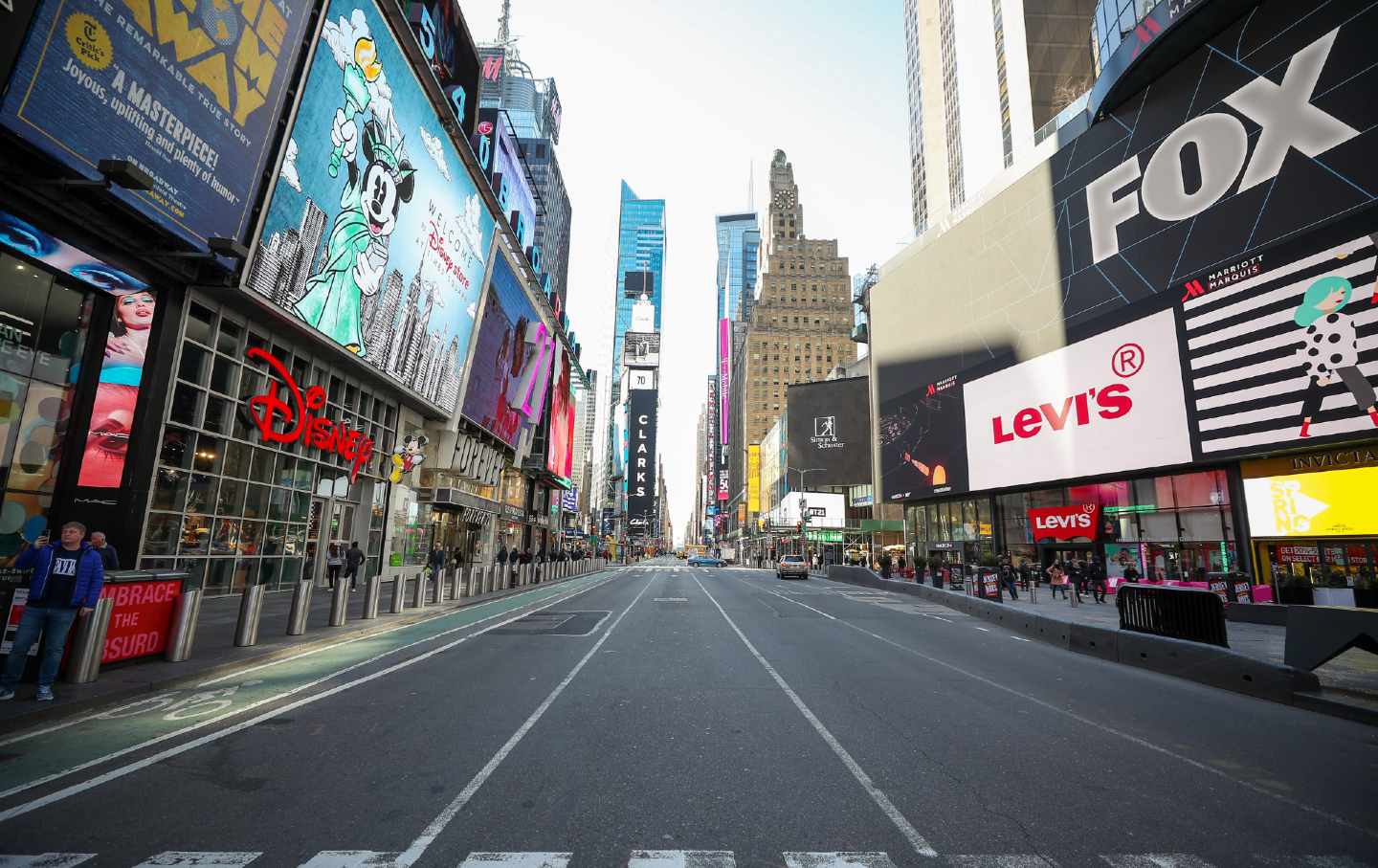 Times Square is nearly empty on March 16, 2020, because of the coronavirus pandemic. (Tayfun Coskun / Anadolu Agency via Getty Images)

The Signal: the steady erosion of everything familiar. The implosion of communal space. The sense that everyone, every surface, every cup in a cafe, could be the enemy. The realization that distances, which for three generations have been compressed by easy air travel, have suddenly expanded. The knowledge that the few square blocks one can walk around now define the perimeters of one’s world. The almost physical sensation of walls being built to cordon one country, one region, one town, one neighborhood, one family, from the next.

On Sunday California Governor Gavin Newsom ordered the immediate closure of all bars and nightclubs in the state and the immediate self-isolation of all Californians over the age of 65. In New York, Governor Andrew Cuomo has closed all schools.

The news updates are head-spinning. The numbers of infected and dead soar. The lockdowns of entire countries escalate. The stresses to the global economic infrastructure multiply, and the extraordinary remedies—such as the Federal Reserve’s trillion-dollar-plus injection into money markets—gather pace. All, it seems, to no avail. The long economic rebound from 2008 now looks to be ending, with a crash that could be as severe as the one that followed the housing market implosion.

In such a vertiginous moment, the country needs someone calm, rational, and determined at its helm. Instead, we have Trump. A man who refused for days to get tested for the coronavirus, despite documented exposure; who shook hands and touched microphones as widely as he could, like a self-absorbed basketball star; who reportedly asked for a go-slow of testing during the early days of the pandemic because he thought lower numbers would boost his reelection chances.

Family Separation Is Torture, According to Physicians for Human Rights

We urgently need leadership capable of envisioning collective responses that would work across borders to mitigate the scale of the calamity. Instead, the Trump administration was reportedly trying to negotiate with Germany’s leading vaccine research company to gain exclusive access to whatever vaccination it developed, so that Americans, and only Americans, would be able to utilize it. This is sheer depravity. Meanwhile, The New York Times reports that the Trump administration has called for loosening nursing home oversight requirements designed to prevent the spread of infections. This is the stuff of Onion headlines.

Sure, the administration has belatedly signed on to measures, largely pushed by House Democrats, to expand paid sick leave and family care leave, and to make testing available to all regardless of insurance coverage. But it has done so parsimoniously, while insisting on exemptions for small businesses and franchise owners.

That’s the Signal. The Noise? While governors and mayors around the country grapple with how to contain the disease, Trump is musing publicly about the really important stuff—like pardoning his friend Michael Flynn and revisiting Hillary Clinton’s e-mails and the Benghazi episode. Of course, there are much more life-affirming and soulful sounds. Witness the people of Italy, mobilized into a national flash mob on social media, singing songs of defiance and hope from the balconies of their houses, in which they are now confined on the public health orders of their government.

Stay healthy and focused. And, as the Italian socialists sing, Avanti popolo!