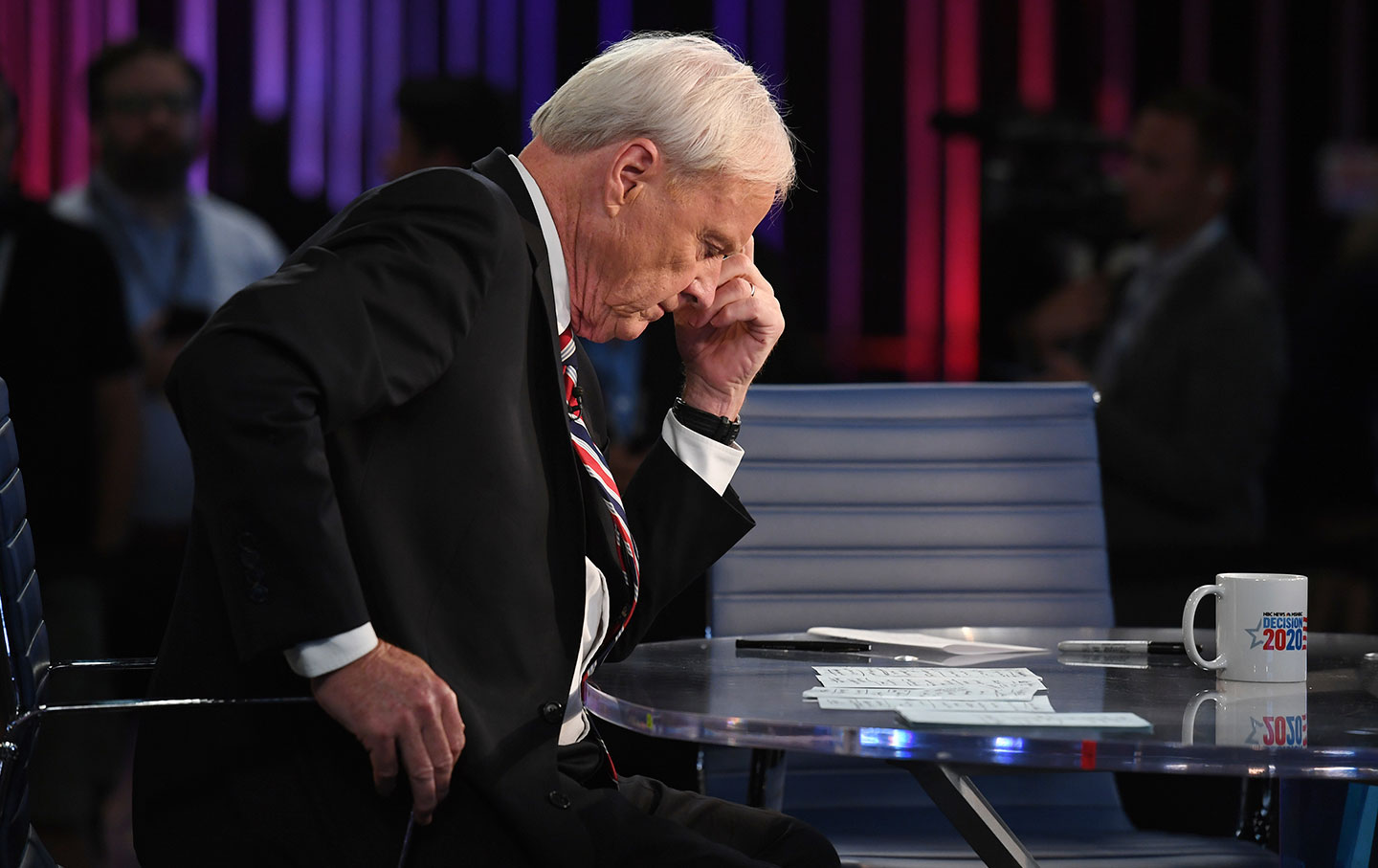 Within a couple of weeks of MSNBC’s failing to renew my political analyst contract at the end of 2017 (after six years, with no warning), I got phone calls from three different reporters with three different news outlets, doing stories (or trying to) about Hardball host Chris Matthews’s treatment of female guests and coworkers. Just after my contract ended, the conservative Daily Caller had reported that Matthews created what some coworkers considered an “openly derisive and brazenly sexist news operation,” and that he frequently rated female guests on a “hotness” scale. The piece revealed a few things I had heard, and a lot I hadn’t. But it was hard to see The Daily Caller as a champion of women in the workplace, since its founder Tucker Carlson had once asked an employee of mine, “What’s it like to work for a c-word?”

With each reporter, I answered a few questions on background, but I decided not to talk about Matthews’s behavior—which I had thought of as merely “old school” for a long time, until I didn’t. We also, more than once, bonded as Irish Catholics. I felt like I’d probably benefited from the host’s attitudes toward women and our Irish Catholic roots, at least for a while, and if I hadn’t complained when it helped me, it seemed churlish to complain after it didn’t.

As everyone knows by now, Matthews abruptly “retired” from Hardball on air Monday night—multiple reports say he was forced out—after a series of missteps that made the host seem not merely old-school but out of it. It wasn’t just sexism: He lost it, multiple times, over the primary wins of democratic socialist Senator Bernie Sanders, suggesting that political opponents like him might be “strung up” if socialists prevailed, and finally equating Sanders’s Nevada victory with the fall of France to the Nazis (for that he apologized to the Jewish senator, who lost family in the Holocaust). He effectively accused Senator Elizabeth Warren of lying when she said former New York mayor Michael Bloomberg told a pregnant female employee to “kill it,” even though the woman herself was on record telling the story and a coworker backed her account to The Washington Post several weeks ago.

On Friday, he confused South Carolina GOP Senator Tim Scott with the Democrat who is seeking to unseat Lindsey Graham, Jaime Harrison, in the middle of interviewing Harrison (you could hear other guests, or producers, urgently whispering “that’s Tim Scott”) until he got it. (Scott and Harrison are both African American.)

But the knockout blow might have come from GQ’s Laura Bassett, who wrote on Saturday about Matthews’s cringe-making sexist treatment on several occasions when she was a Hardball guest. She wrote that he asked in 2016, as she was about to discuss sexual harassment allegations against Donald Trump, “Why haven’t I fallen in love with you yet?” Another time, she says, he told the makeup artists, “Make sure you wipe this off her face after the show. We don’t make her up so some guy at a bar can look at her like this.”

The reason I believe Bassett’s brave piece mattered most is that Matthews apologized, in his “retirement” statement, only for his treatment of women. “Compliments on a woman’s appearance that some men, including me, might have once incorrectly thought were okay, were never okay. Not then and certainly not today. And for making such comments in the past, I am sorry.”

As apologies go, it was a good one—though somewhat undermined by the fact that he’s had to make a number of apologies for sexist comments over the years. Maybe understandably, many of Matthews’s colleagues and frequent guests expressed sadness and support for the 23-year Hardball veteran. But one of those tributes struck me as especially wrong. Washington Post columnist Kathleen Parker, a frequent Hardball guest, tweeted:

Chris Matthews is a friend of mine. He and I have flirted unabashedly for 20 years. This is an atrocious end to a noble, happy-warrior career. I will continue to be his friend. Angry column to follow. #ChrisMatthews #NoCryingInBaseball #Hardball
—kathleenparker (@kathleenparker) March 3, 2020

On one level, I understood Parker. She came up in an era when putting up with male misbehavior was just part of the job of being a journalist. Sometimes you could make lemonade out of lemons; maybe she genuinely enjoyed “flirting” with Matthews. But to insinuate that what other women experienced with the host was equally enjoyable, well, OK Boomer. (And I say that as a boomer.)

I’ve already written about how the #MeToo reckoning of the last few years made me reckon with how I’d put up with sexist behavior for too long—and worse, made me realize that I hadn’t protected younger women from it when I had the chance, whether as a manager or a colleague. I wouldn’t say Matthews and I “flirted,” but I certainly tolerated his compliments about my looks and, often on camera, about my “smile” as harmless. It wasn’t until I watched younger women squirm at his compliments that I started realizing they weren’t harmless—they made it harder for women, myself included, to be taken seriously for doing our jobs.

But the real blame for Matthews’s years of “old school” behavior rests with his bosses at MSNBC. I remember this Mark Leibovich profile from 2008, which shared not only his on-air treatment of then CNBC anchor Erin Burnett (now my CNN colleague)—he leered at her, saying “You’re a knockout…. it’s all right getting bad news from you,” and asking her to come closer to the camera—but a stunning story about actor Kerry Washington, a Barack Obama supporter. Apparently, Matthews and his boss Phil Griffin ran into Washington at a bar after a presidential debate in Cleveland. Griffin told the actor he’d like to get her on MSNBC.

What’s missing from the story is any sign that Griffin was bothered by Matthews’s behavior or tried to rein him in. That pattern would repeat itself—until Monday night.

The Washington Post’s Erik Wemple has a compendium of the host’s crass behavior here. To me, Matthews’s clearest firing offense was joking before a 2016 interview with Hillary Clinton, whom he had trashed repeatedly over the years, “Where’s that Bill Cosby pill I brought with me?”—an apparent reference to the drug the convicted rapist used before he assaulted women. The Cut obtained a video feed of Matthews’s sick joke two years ago and published it; Matthews, again, apologized, and nothing happened.

Still, I chose not to talk about what I experienced, because I knew for a time it benefited me, and then it didn’t. For eight years, I had a regular twice-a-week slot on Hardball—until 2016, when a booker told me she’d been instructed to search for “fresh faces.” A lot goes through your mind when you’re a 58-year-old woman and you hear that—and when you see dozens of men your age and older, your old pals—on Hardball, and very few women that age (except, of course, Parker), but you have no proof it’s sexism. Television is always searching for fresh faces—especially female faces.

I still felt a twinge of sadness for Matthews Monday night. Like other men and women, I do believe his support helped me along when I was just getting started. Again, the ultimate blame rests with male bosses who either saw nothing wrong with Matthews’s brand of chauvinism, or looked away from it. With tougher bosses less tolerant of sexism, he might have had to clean up his act a long time ago, and been able to retire on his own terms as he planned, reportedly at the end of this year. Instead, the hook came quickly for the 74-year-old host, while the men who enabled him are still employed.