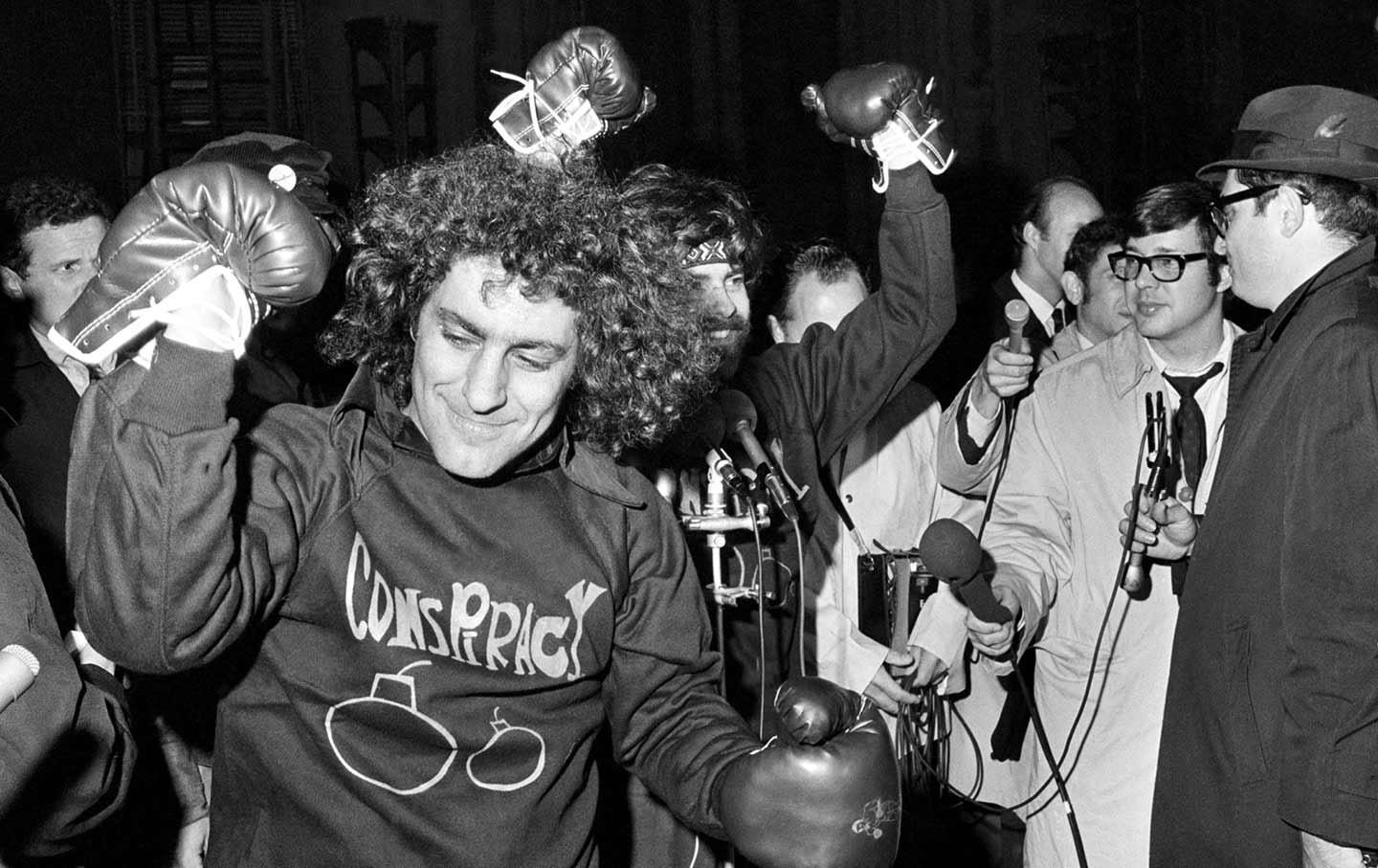 Abbie Hoffman, left, and Jerry Rubin wear boxing gloves as they meet newsmen in rainy Washington outside the Justice Department to publicize their cause on October 27, 1969. (AP Photo / Harvey Georges)

I know it’s unlikely that Trump would change the channel from Fox to Netflix and watch the new Aaron Sorkin film The Trial of the Chicago 7. Sorkin—best known for The West Wing on TV—is a master of “liberal wishful thinking,” as New York Times critic A.O. Scott put it, and Trump’s taste in movies goes more toward Rambo and Death Wish. But if he did watch The Trial of the Chicago 7, he might call his attorney general, Bill Barr, and say, “Why don’t we do to the leaders of Black Lives Matter what Nixon did to the Chicago 7? Why don’t we put protest movement leaders on trial for conspiracy to incite a riot?”

He’s tweeted about it, sort of, writing, “Crossing State lines to incite violence is a FEDERAL CRIME!” That was back on May 30, at the very beginning of the George Floyd protests in Minneapolis. And that, in fact, is what the Chicago defendants were accused of. “Liberal Governors and Mayors,” Trump continued, “must get MUCH tougher or the Federal Government will step in and do what has to be done, and that includes using the unlimited power of our Military.” (Of course, the law provides that the guilty individuals go to prison, not that the military occupy their cities.) But of course Trump hasn’t charged anyone with federal crimes. Instead, he’s threatened mayors with cuts in federal funding.

A bit of history: At the end of Nixon’s first year in office, 1969, eight activists went on trial in federal court in Chicago, charged with conspiracy and crossing state lines to incite a riot at the Democratic National Convention in Chicago in 1968. Prosecutors told the jury that the defendants encouraged people to come to Chicago to riot and “defy the orders of the police and the military.” Trump and Barr could tell a jury that protest leaders this past summer did the same thing. (In fact, as the movie shows, the Chicago organizers had spent months beforehand applying for permits to make the upcoming protest legal and peaceful, but their applications were denied by the city and the courts.)

For the Nixon administration, the trial was intended to portray demonstrators not as citizens exercising their constitutional right to challenge a policy they considered immoral and wrong, but rather as victims of a few self-appointed leaders who duped and manipulated them into joining an illegal and violent conspiracy. That idea would probably appeal to Trump. 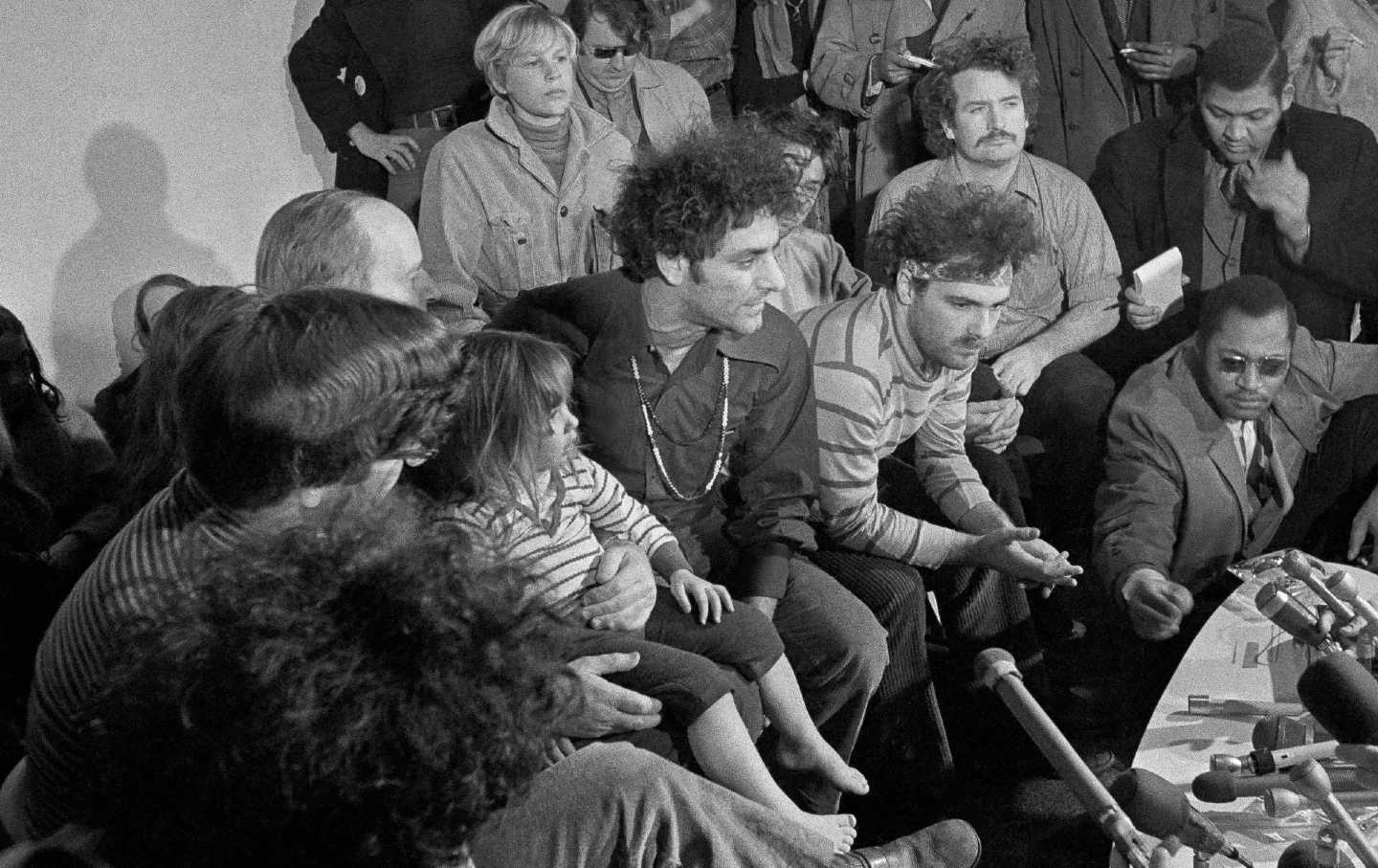 But instead he came up with a different idea. Trump in September called Seattle, Portland, and New York “anarchist jurisdictions,” and declared that “my administration will not allow federal tax dollars to fund cities that allow themselves to deteriorate into lawless zones.” Attorney General Barr added that the cities “permitted violence and destruction of property to persist and have refused to undertake reasonable measures to counteract criminal activities.”

Trump doesn’t have a legal basis for his idea; funding for cities, and everything else, is controlled by Congress, not the president. Nevertheless, federal officials in October hinted that New York City might not be eligible for certain transit grants, which city officials took as a threat that the feds might cut funding not only for the MTA but also for the health department and the police. So New York City, along with Portland and Seattle, sued the Trump administration on October 22, asking the courts to rule that such a move would be unconstitutional.

One of Trump’s campaign themes has been that American cities are “violent hellscapes that only he can save,” as Maggie Haberman and Jesse McKinley wrote in The New York Times. Of course, almost all of them elected Democratic mayors and voted against Trump in 2016 (and all have been overwhelmingly peaceful). During the campaign he has focused, appropriately, on Democrats rather than on protesters, but after Election Day he may be looking for escapist entertainment. I hope he sticks with the Rambo sequels.