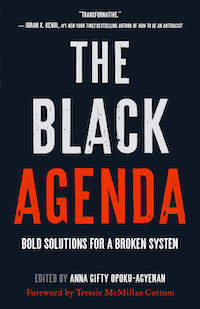 Anna Gifty Opoku-Agyeman's new book, The Black Agenda: Bold Solutions for a Broken System, is out everywhere books are sold.

From 1975 to 2016, the increase in Black doctoral recipients among US citizens and permanent residents, across every major field of study, outpaced white doctoral recipients. Additionally, Black doctoral recipients are more likely to be first-generation students. Nonetheless, public discourse has long ignored Black experts, who often understand how compounding crises are confounded by demographic and socioeconomic differences. For example, William Spriggs, an economics professor at Howard University, noted how the Federal Reserve missed early signs of the Great Recession because it did not listen to warnings from Black economists. More than a decade later, very little has changed.

Today, Black experts are simultaneously hyper-visible and silenced, seen but not heard, acknowledged but not cited. The late W.E.B. Du Bois noted that the lives and works of Black scholars inevitably become part of public discourse, public life, and social commentary. Nonetheless, Black experts are often chastised for lacking “objectivity” and “relevance” on matters related to Black life and beyond.

In 2022, the stakes could not be higher: As Covid-19 heads into a devastating third year, those with the most power can no longer ignore the wisdom of Black experts, who continue to sound the alarms on pandemic-related issues that impact everyone.

If policy and industry leaders are truly determined to place equity at the center of politics and the survival of American democracy, Black experts can no longer be relegated to diversity, equity, and inclusion panels. And taking up space can no longer be viewed as conditional. This moment demands that individuals, institutions, and communities make equitable room for Black expertise on all matters. This moment demands that we see Black people, especially Black women, in every level of leadership, including on the Supreme Court. The time for excuses is over; call in the Black experts.

As part of a new collection of essays that I edited, titled The Black Agenda: Bold Solutions for a Broken System, I gathered Black scholars and experts, the majority of whom identify as women, from across the country for their perspectives on climate, education, health care, wellness, criminal justice, technology, and the economy. The Black Agenda aims to achieve something institutions have repeatedly failed to do: definitively illustrate why Black experts should be at the helm of public discourse on issues ranging from jobs to student debt.

On jobs: Black and brown workers have either been on the front lines of the pandemic or out of work since March 2020. While economists found that the unemployment insurance benefits boost kept our economy afloat, some in bad faith suggested that the boost discouraged people from working. In their analysis, they weaponized pernicious racial tropes of Black people as “lazy” and re-upped a favorite stereotype among conservatives—the “welfare queen”—and legislators followed their lead. For example, in private comments about the Biden administration’s Build Back Better agenda, Senator Joe Manchin reportedly said he was concerned “parents would use their child tax credit payments…to buy drugs.”

If policy-makers were serious about long-term, sustainable solutions for unemployment, they would consider “Black Women Best.” Coined by Janelle Jones, the Department of Labor’s first African American woman chief economist, the framework’s premise is that the best economic outcome for Black women is a better outcome for everyone. For example, if the gender pay gap were closed for Black women, it would also be eliminated for white and Asian women. Small businesses were granted federal funding during the pandemic, but only 12 percent of those businesses were owned by people of color. However, since the majority of businesses owned by people of color are owned by Black women, and Black-owned businesses are known to have been the hardest hit during the pandemic, efforts that specifically focus on the needs of Black women business owners would almost certainly help all small-business owners.

On care work: As the US population ages, the need for care work in both long-term facilities and private residences will continue to grow. Moreover, the United States depends on Black women to perform unpaid and low-paid care duties, despite the fact that Black women are twice as likely as white women and 50 percent more likely than Hispanic women to be their family’s breadwinner.

Yolonda Wilson, a bioethicist at St. Louis University, says health justice cannot exist without the legitimization of care work. By valuing care work, which is an estimated $470 billion industry, leaders can support care workers through paid family and medical leave, affordable child care, higher wages, and better worker protections. She further advocates for clear career pipelines from historically Black colleges and universities into the care work industry. Each of these proposed solutions aligns with the Build Back Better plan, which unlike FDR’s New Deal, would benefit domestic workers as well as address childcare costs and reduce child poverty.

On student debt: Black women have the highest amounts of student debt while having the lowest gains in premiums for their college degree.This is despite the fact that they are the most educated group in America. In 2016, 57 percent of Black women repaying student loans reported that they were unable to meet essential expenses.

According to Fenaba Addo, an assistant professor at the University of North Carolina, and her coauthors, many anti-poverty policy proposals do little to close the racial wealth gap. If the student debt crisis continues, generational wealth may no longer be an option for debt holders, especially Black Americans. Currently, the only option that ensures action for Black women, who have the highest average student debt at $37,558, is Senators Chuck Schumer and Elizabeth Warren’s plan, backed by Representative Ayanna Pressley, to forgive up to $50,000.

At the crux, research in numerous fields continually shows why policies aimed at helping Black Americans, especially Black women, have wide-ranging positive impacts on the greater health, economy, education, and quality of life of people in the United States. Ultimately, as The Black Agenda shows, Black scholars exist in every field, and it’s up to institutions and leaders to make room for our expertise all year round. The failure to do so will perpetuate inequalities not only for people today but for generations to come.