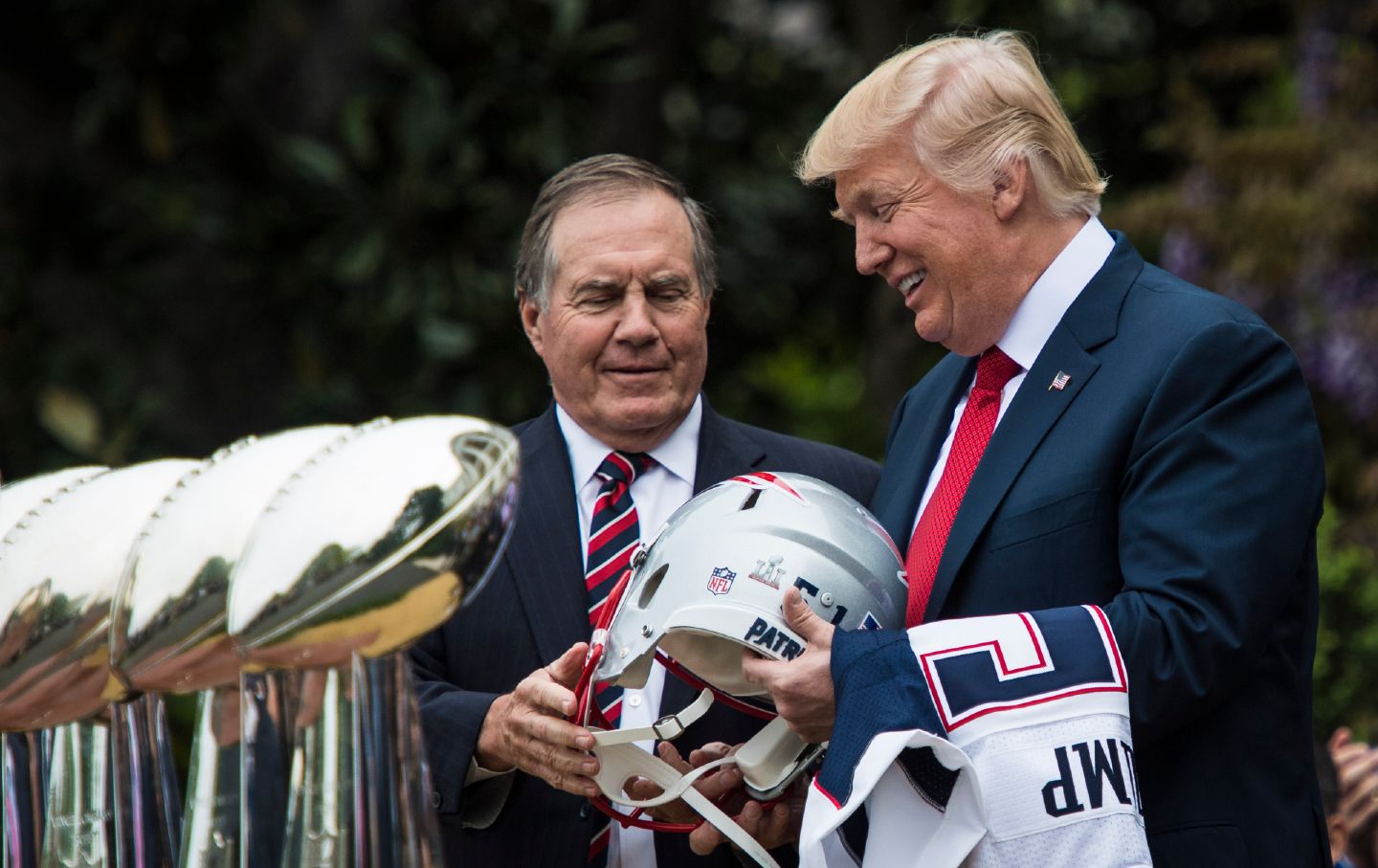 President Donald Trump is presented with a New England Patriots helmet and jersey from Patriots head coach Bill Belichick during a ceremony on the South Lawn of the White House in 2017. (Jabin Botsford / The Washington Post via Getty Images)

Donald Trump has always viewed sports as central to his authoritarian political project. His attacks on Colin Kaepernick and LeBron James, his call to fire players for protesting police violence, and his bragging that he “saved” college football from those concerned that the sport would lead to super-spreading the coronavirus (it did) are all examples of the ways he has used our games as his own poisonous platform.

Trump has also delighted in the sycophancy of athletes, coaches, and franchise owners who are willing to bend the knee before him and pledge their allegiance. Yet there is no category of sportsman more appealing to Trump than the ones that mirror his own toxic masculinity. He has no regard for women’s sports at all. He loves the Ultimate Fighting Championship and their fake, macho tough-guy president Dana White. He preens with joy when hearing that golfers like Tiger Woods or Jack Nicklaus show him affection. Trump is not a lover of sports. He is a lover of a noxious goulash of alpha male horseshit that represents the worst of sports.

No one exemplifies this quite like Bill Belichick. The New England Patriots coach with the six Super Bowl rings, a demeanor that redefines gruff, and a belief that his own workers should have “no days off” is everything Trump loves: a winner who loves him back. In 2016, the night before the election, Trump read a letter written to him by Belichick, effusive in its praise. It included the lines, “You have dealt with an unbelievable slanted and negative media, and have come out beautifully—beautifully. You’ve proved to be the ultimate competitor and fighter. Your leadership is amazing. I have always had tremendous respect for you, but the toughness and perseverance you have displayed over the past year is remarkable. Hopefully tomorrow’s election results will give the opportunity to make America great again.”

That’s why it came as no surprise in the aftermath of the fascist riot on Capitol Hill when it was announced that Trump would bestow the Presidential Medal of Freedom later this week upon Bill Belichick. And that’s also why it came as an even greater surprise when Belichick turned it down. Here is the at times tortured, at times sincere, statement that Belichick released, announcing his refusal:

Recently I was offered the opportunity to receive the Presidential Medal of Freedom, which I was flattered by out of respect for what the honor represents and admiration for prior recipients. Subsequently, the tragic events of last week occurred and the decision has been made not to move forward with the award. Above all, I am an American citizen with great reverence for our nation’s values, freedom and democracy. I know I also represent my family and the New England Patriots team. One of the most rewarding things in my professional career took place in 2020 when, through the great leadership within our team, conversations about social justice, equality and human rights moved to the forefront and became actions. Continuing those efforts while remaining true to the people, team and country I love outweigh the benefits of any individual award.

Before anyone gives Belichick a cookie, we should be clear that if he had accepted this award, it would have been a scar on his reputation; an indelible mark that no number of Super Bowl rings would have been able to cover up. To be used as a prop by this president while Capitol Hill police officers were still having their funerals planned would be beyond the pale, even for Belichick. In addition, it is difficult to imagine any “social justice” initiative taken up by the Patriots ever being taken seriously by anyone again.

Then there is the issue of the Patriots players themselves. Belichick depends upon his mystique as a “leader of men.” If players don’t want to come to New England, then Belichick’s plan of rebuilding and proving that he can win without former quarterback Tom Brady goes by the wayside. And imagine if current players took to social media to express their disgust or disdain. His mystique would quickly become a depreciating asset.

Make no mistake, Belichick did the right thing. Whether he did it for the wrong reasons is something worth pondering, especially as Trump’s allies begin to disembark from his sinking, rat-infested ship. Trump’s presidency is coming to an end. His exploitation of sports has now been mortally wounded as well, and by someone he assumed would never brandish the blade.