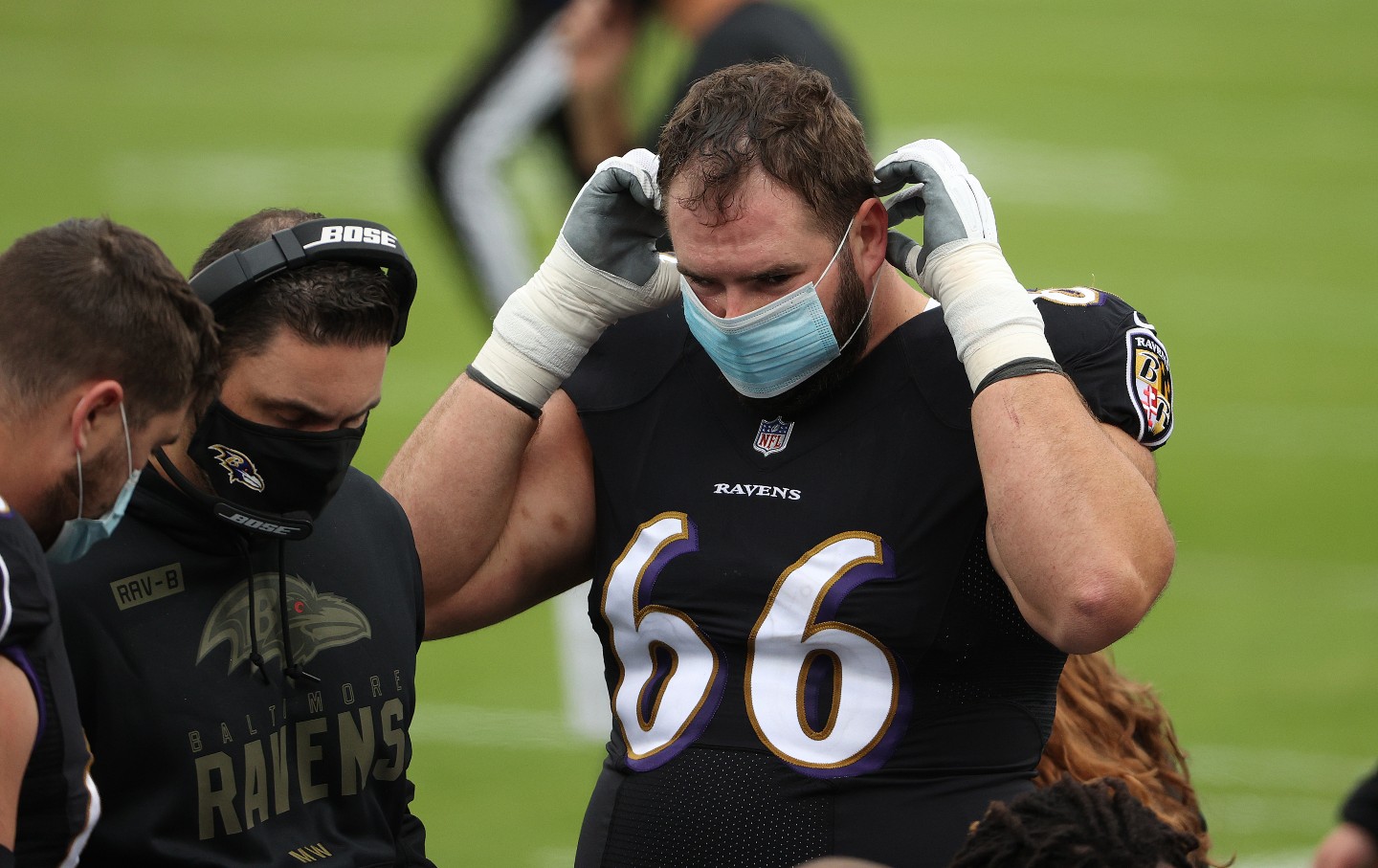 Will Holden of the Baltimore Ravens during a game against the Tennessee Titans on November 22, 2020, in Baltimore, Md. (Patrick Smith / Getty)

It’s 2020, so of course a NFL game was just played at 3:40 pm on a Wednesday. The Baltimore Ravens lost 19-14 to the unbeaten Pittsburgh Steelers, but the real story is why this Thanksgiving matchup was played on a weekday afternoon in December. It’s a story of a pandemic and a possible labor protest.

For six consecutive days leading up to the contest, a multitude of Ravens players were diagnosed with Covid-19. The game was moved three times as the positive tests rolled in. All told, 16 players on the Ravens were out after contracting the virus, including a whopping seven players who have been to a Pro Bowl. This included the team’s MVP quarterback, Lamar Jackson. At its height, the Ravens had more than 20 players on the “Covid list.” And the players are pissed off.

sports in a pandemic 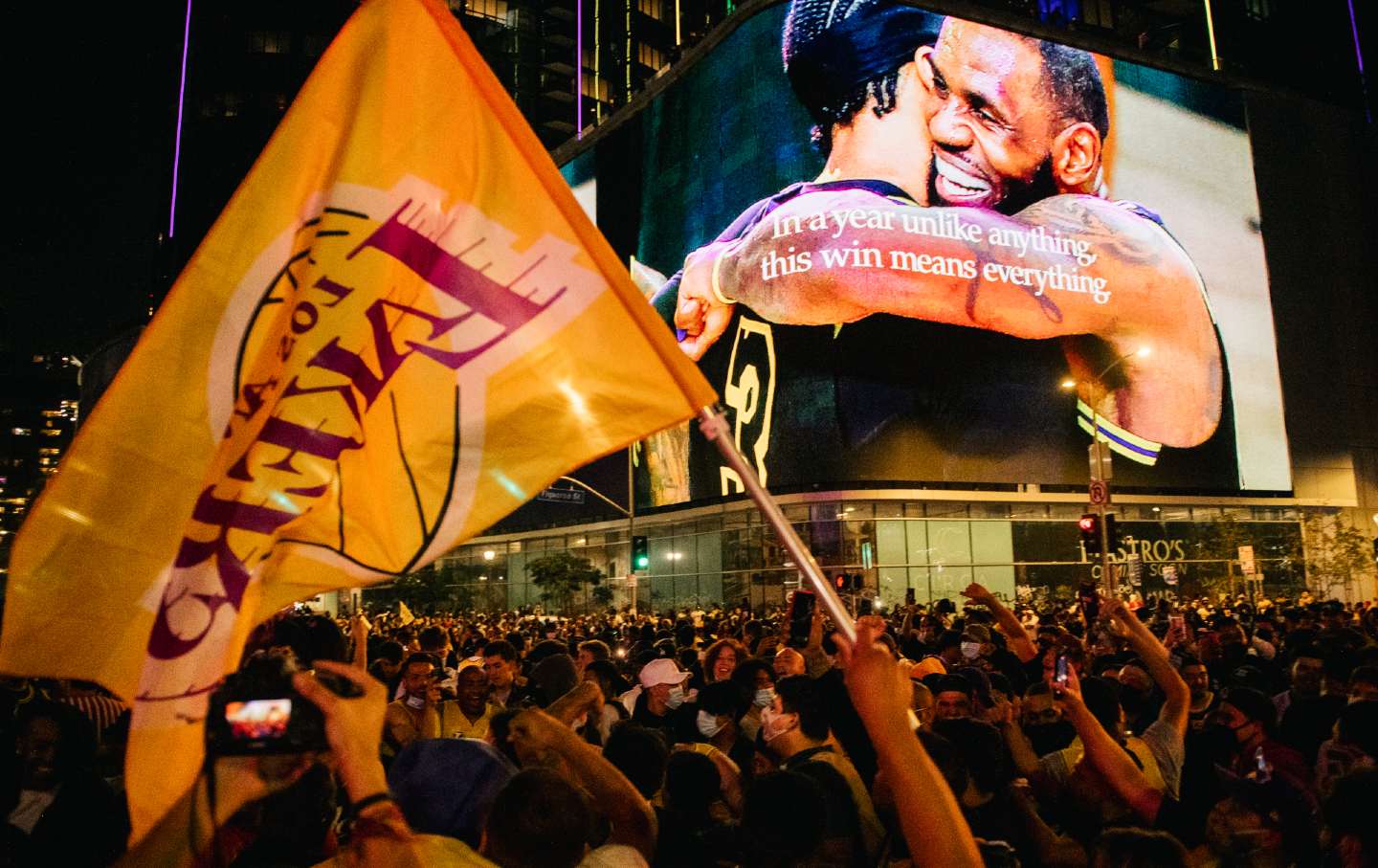 Their rage stems from the fact that this outbreak is believed to have been caused by the team’s head strength-and-conditioning coach, Steve Saunders, who was disciplined by the team for not consistently wearing a mask at the team’s indoor facility. The organization’s response to the crisis has been tepid. Meanwhile, fans have created an online petition to have Saunders fired, which is gathering steam. Baltimore Sun columnist Mike Preston called for “heads to roll” as a result of the outbreak, writing, “More than 250,000 people in this country have died from this pandemic, so there should be zero tolerance. Either follow the protocol or find a new job.” Instead, the Baltimore team has adopted the approach of “next man up,” as if a strain of sprained ankles were being spread around the clubhouse.

That this outbreak occurred among the Ravens should not be a surprise. Chekhov’s gun was brandished in the off-season when Head Coach John Harbaugh, with a macho swagger, said of the virus, “You can look at it any way you want to look at it, but I’m not going to run for cover and I don’t think the NFL is either.” But this isn’t a gunfight at the OK Corral. This isn’t about bravery or fear. The virus doesn’t care how many times you can bench press 225 pounds, and it doesn’t give a damn if a healthy football player gives it to someone far less able to fend off the worst effects. Now, the gun has gone off, and the team was ravaged right before facing their bitterest division rival in what so far was their most important game in their season.

The Ravens players are not happy with the organization’s culpability in this outbreak. There was even talk of refusing to play and choosing instead to engage in a wildcat strike and forfeit the game in protest. They were that angry. If the Ravens had flexed their labor power, they would have continued the actions by NBA and WNBA players over the summer who struck for racial justice following the shooting of Jacob Blake in Kenosha, Wis.

The Ravens threatened to join other workers in using the strike to make demands about their health and safety during this pandemic. Had they gone through with it, they would have been in direct conflict with their union, the NFL Players Association, which signed on to this idea that games would be delayed but not canceled, or players on both teams would be forfeiting game checks. It would have been a radical act in defense of their own health, because who really knows if more players have Covid at this point? That puts the Steelers players at risk as well. Announcers have fallen over themselves to praise the NFL and the union for playing every game on the schedule without cancellation, even though many teams have had players ruled ineligible; even though 28 of the 32 clubs, according to Sports Illustrated, have been in the league’s Covid protocol; even though the Broncos had to play Sunday without a quarterback; and even though the Ravens were beaten—albeit barely—with just half a team on the field.

If there is one thing we have learned about sports in the pandemic, it is that unless you are able to convince the players to get in a hermetically sealed bubble to play and also to live, outbreaks are inevitable. The NFL has tried to brazen its way through the pandemic. Given the right-wing, macho ethos of the league’s franchise owners, this is not surprising. But it is another example of the unmitigated disaster that has been the United States’ response to the pandemic under Trump’s leadership.

Sportswriter Jane McManus was correct when she wrote that sports are the reward for a functioning society. Our society is not functioning, and our athletes will suffer just as surely as the rest of us.