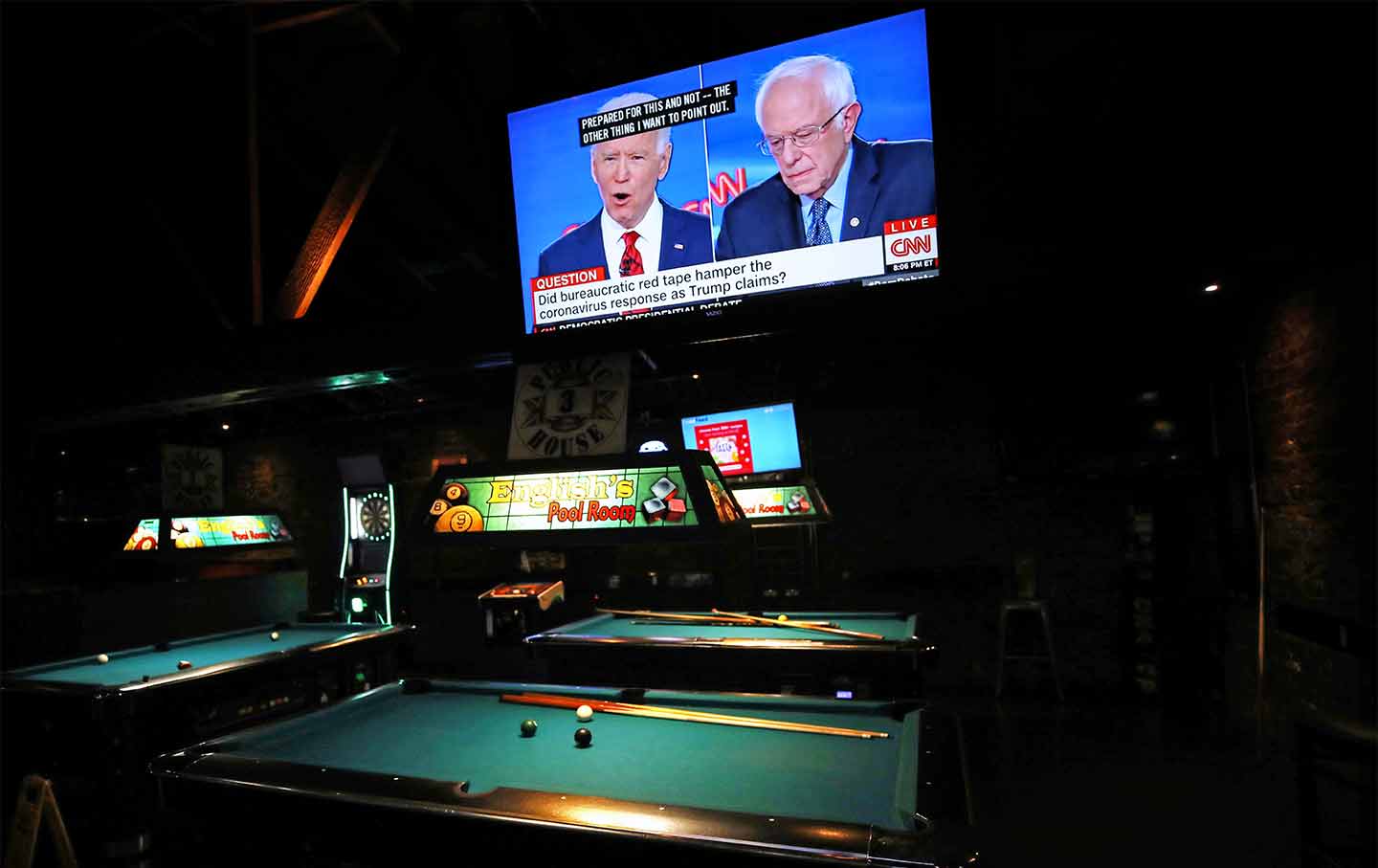 Moments after the first one-on-one debate of the 2020 Democratic presidential race concluded Sunday night, CNN flipped from the candidates to Dr. Sanjay Gupta for an update on the coronavirus outbreak.

While the cable networks can usually be faulted for their lack of perspective, CNN got that call right. What the network’s chief medical correspondent had to say about the pandemic was, undoubtedly, of more interest to more Americans than what the candidates had just argued about.

That’s not because Joe Biden and Bernie Sanders didn’t speak to weighty subjects in one of the more issue-oriented debates of the 2020 race. The problem was that too many of the discussion points—including an extended examination of what Sanders said about the late Cuban President Fidel Castro and the Nicaraguan Sandinistas in the 1980s—veered off-topic on a night when cities and states were ordering schools, bars, and restaurants to close.

America had some very specific concerns on Sunday night. The most-discussed social media post was a desperate call from Illinois Governor J.B. Pritzker: “The federal government needs to get its s@#t together. NOW.” Panic buying was hitting warp drive. The Federal Reserve was announcing that it would slash interest rates to zero in an emergency effort to sustain the economy. Yet, stock market futures were tanking.

Biden, who is now the leader in the race for the Democratic nomination, and Sanders, who is the last serious challenger to Biden, addressed the pandemic in their opening statements and early remarks. But neither spoke so ably Sunday night as they had in pronouncements last week with regard to the burgeoning crisis.

Nothing Biden said Sunday was as pointed as his charge on Thursday that “labeling COVID-19 a foreign virus does not displace accountability for the misjudgments that have been taken thus far by the Trump administration.”

Nothing that Sanders said was so poignant as his pre-debate declaration:

Now is the time for solidarity. We must fight with love and compassion for those most vulnerable to the effects of this pandemic.

If our neighbor or co-worker gets sick, we have the potential to get sick. If our neighbors lose their jobs, then our local economies suffer, and we may lose our jobs. If doctors and nurses do not have the equipment and staffing capacity they need now, people we know and love may die.

During the debate, the candidates restated their views on President Trump’s failure to address the crisis and outlined their own proposed responses—with Biden more focused on immediate issues and Sanders bringing up structural concerns. They then followed the CNN and Univision moderators down the primrose path of past debate topics—wasting away an hour and a half on issues that had already been addressed and predictable disagreements between the democratic socialist who is winning the ideas primary and the centrist who has won most of the actual primaries.

The candidates gave the coronavirus debate too little time and, even when they were discussing issues such as bankruptcy law, they failed to circle back to the topic with which most Americans are justifiably obsessed.

Both Sanders and Biden had opportunities to seize the moment by making bold proposals for immediate action. Both could have pushed the debate to places that would have made voters perk up and want to hear more. But they never quite got there.

If only one—or even both—of them had stolen a page from Andrew Yang, the entrepreneur and author who bid for the 2020 Democratic nomination as an advocate for a universal basic income (UBI) scheme that would give every American $1,000 a month. On Sunday, the former candidate was saying more than the current candidates about the consequences of locking down the US economy.

“This threatens to be worse than the financial collapse of 2008. The meltdown didn’t cause people to stay home, cancel mass gatherings and travel and shut down schools for weeks/months,” Yang warned on Twitter. “There needs to be a stimulus at an economy-wide scale to avoid the real chance of a depression.”

Yang was unfairly accused during his bid for the nomination of being a one-note candidate. But now, amid the COVID-19 outbreak, the UBI note is resonating, as the former candidate—who has endorsed Biden, while hailing Sanders as an “inspiration”—explains, “Treating this as a pandemic is one thing. Treating this as an imminent economic depression and societal catastrophe spurred by a pandemic is another. You should flood the zone with buying power and a sense of personal financial security as fast as possible.”

On Friday, two congressional Democrats proposed a somewhat Yang-like plan that would “send checks to 200 million Americans within three weeks of the legislation’s passage, followed by additional monthly payments for the rest of the year.”

Representatives Tim Ryan, an Ohio Democrat who backs Biden, and Ro Khanna, a California Democrat who serves as a cochair of the Sanders campaign, are backing legislation to establish an emergency Earned Income Tax Credit in response to the pandemic. They explain that their legislation would “provide a check between $1,000 and $6,000 to every American who earned less than $65,000 last year. More than three-quarters of American workers would qualify for this tax relief. Americans most likely to be impacted by the public health crisis—including hourly workers, independent contractors, and gig workers—would get a much-needed emergency boost during this economic downturn.”

And over on CNN, commentator Van Jones said that the candidates would have been smart to echo Yang. “If we’re gonna be honest,” said Jones, “the only way to keep the economy from going into a complete free-fall now is to put money directly into the hands of people.”

A candidate who was not even in the race any longer had the idea that needed to be talked about Sunday night. Unfortunately, the remaining candidates talked about the need to “make people whole” without ever explaining how to do that.