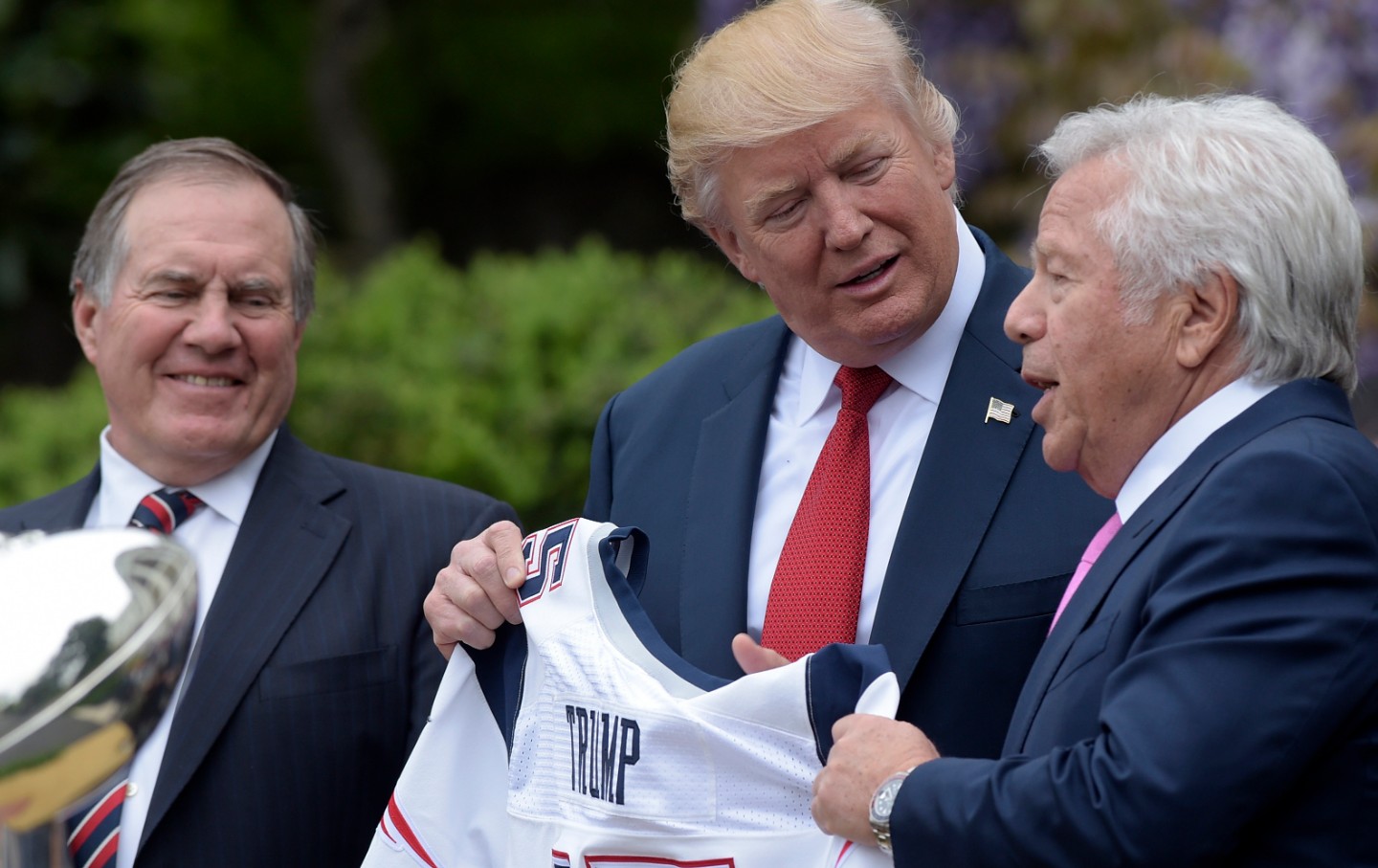 President Donald Trump is presented with a New England Patriots jersey on the South Lawn of the White House. (Susan Walsh / AP)

Donald Trump wants the NFL on the field this fall, and he wants it bad. “We have to get our sports back,” he says. Why is this such an issue for him amid the deadliest pandemic in a century? The obvious answer is his reelection, which hinges in large part on whether people feel we are returning to some sense of normalcy in our Covid-19-ravaged world.

Even though Trump hasn’t done any of the hard work to make sure we can reopen, he has to sell the illusion that things are back to something near normal. You can go to your salon. You can get a beer. You can watch football.

Culturally, there is no greater sign of normalcy than the NFL coming back into the routine of our lives. It’s the country’s most widespread entertainment obsession. Its absence tells voters, particularly Trump’s base, that after all these months, we are still in an unconscionable and unnecessary death spiral.

Trump, of course, has allies in this project. Many NFL owners are billionaire Trump supporters. They handed him millions in 2016 and are prepared to do the same in 2020. Trump’s “reopen sports” committee includes no union reps, no health authorities, no women, and no people of color, but does include friends of Trump like the execrable Jerry Jones, owner of the Cowboys, and scandal-marred Bob Kraft of the Patriots. He and his cronies want the games back, even if it means watching from hermetically sealed bunkers while the players risk their lives.

For his part, Commissioner Roger Goodell has proven over the years that he cares little for the health of the players, 70 percent of whom are black. Some players joke that NFL stands for “Not For Long” or “N___ for Lease.” Most players are in a terrible situation, with the average career lasting only three years. If they don’t play, they will lose their jobs. They only have a small window to earn a hefty NFL salary, and aren’t in a position to tell the franchise owners to take their celebrity death match and shove it. The NFL owners hold all the cards, so the only thing stopping them from opening prematurely would be their consciences. In other words: nothing.

It doesn’t even matter to them if they play the games in front of empty stadiums. The billions of dollars at stake are in the television rights, and they are going to put games on the field, even if the games feel like they are being played in a massive, publicly funded crypt.

As for the sports networks like ESPN, there is not even the pretension of covering this critically. They are in a multibillion-dollar partnership with the NFL. All of their daily yak-fests are dependent on the NFL for new content. They can only argue about whether Michael Jordan, who retired almost 20 years ago, is the greatest player of all time for so many segments. So instead ESPN will air a three-hour special where they go over the NFL’s release of the schedule with a Coke and a smile.

Meanwhile, the word from Roger Goodell, according to a memo obtained by Pro Football Talk, is that no team executives are even allowed to discuss hypotheticals when it comes to the coming season. No one can wonder what happens if players start to get infected. No one should opine about the motivations of the league. No one can say anything. Only Roger Goodell can speak on the reopening of the league, and Roger wants these games played by any means necessary. Their slogan should shift from “NFL is family” to “Bury your head in the sand and shut your mouths.”

The NFL and ESPN are now party to the Trump reelection strategy. Any pretense of journalism is gone. They are taking advantage of the desperation of the players to get on the field, and the desperation of fans for some sense of normalcy and entertainment, and making us complicit in this project. It stinks to high heaven. The players, the fans, and the very game of football all deserve better than Roger Goodell and Donald Trump.