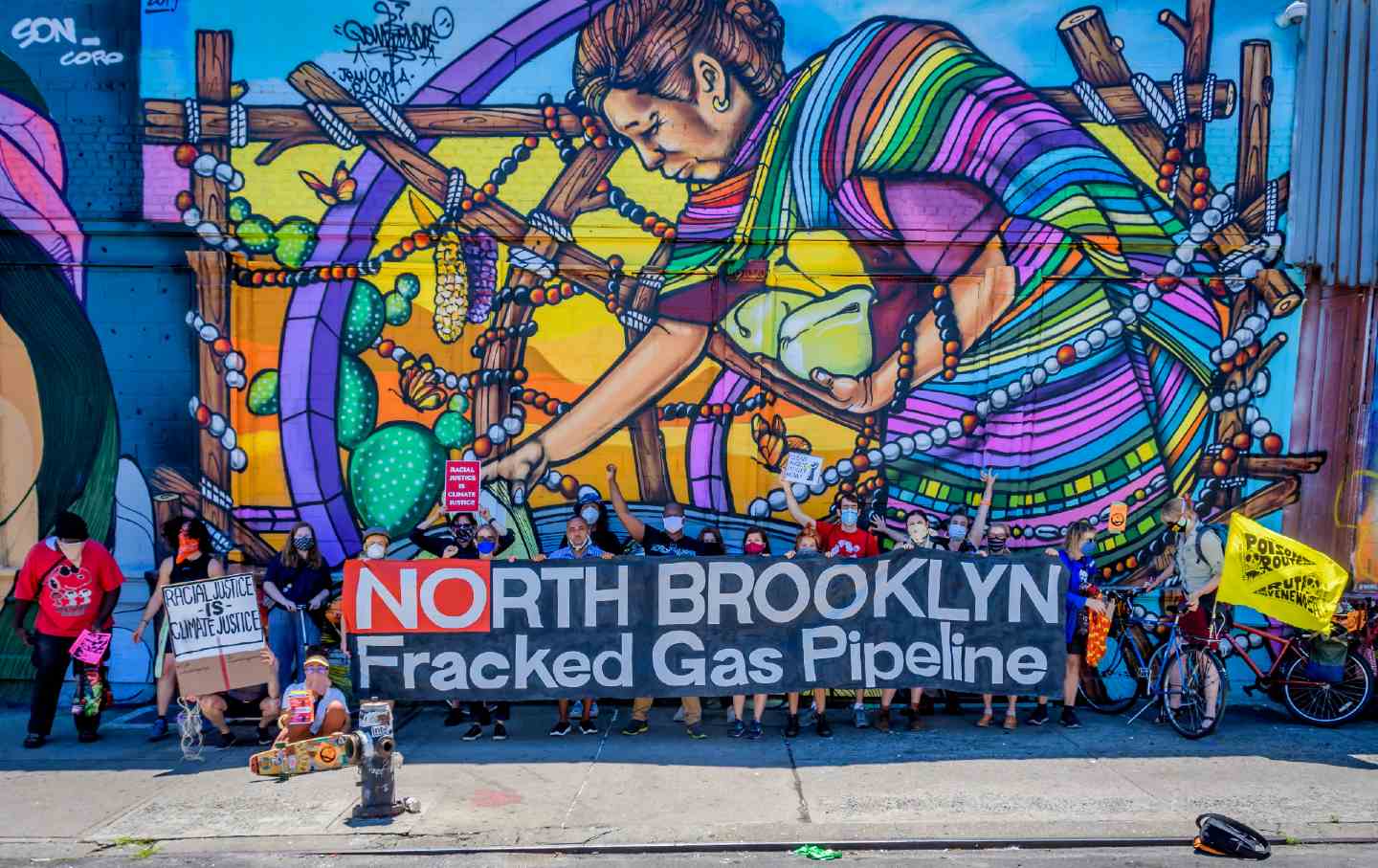 It’s February 2021. President Joe Biden and Vice President Kamala Harris have just been inaugurated, a new cabinet’s been sworn in, and Democrats have reclaimed their majority in the US Senate. There’s a palpable sense of relief in the air, but also a real sense of urgency, because a legislative fight is already underway over a green stimulus bill. Leadership didn’t give activists everything they wanted, but the bill would create millions of jobs and prevent a recession while also scaling up renewable energy and building the clean energy economy of the future. It would represent a massive step forward for climate justice, which is why Exxon Mobil and Chevron are running ads on the airwaves of newly elected freshman members in swing districts. In Pennsylvania, the ads accuse Democrats of destroying fracking jobs. Elsewhere, they say Democrats will raise the price of gas and the cost of household plastics. All of which will stack on top of the predictable Fox News onslaught heralding the end of meat, the internal combustion engine, airplane travel, and freedom.

What will our response be as Democrats on legislative Game Day, our best real shot to mitigate climate disaster, when the right-wing fearmongering comes? That’s where my head went as I watched the climate change section of last week’s vice presidential debate. The first mention of climate came when the moderator asked Vice President Mike Pence if man-made climate change was real, which is like asking candidates whether there are millions of Americans who don’t have health insurance in this country—it’s just a fact, no exchange of opinion required. But Pence, sensing the opportunity to deflect from his administration’s inaction on climate, used the question to immediately accuse Harris and Biden of wanting to ban fracking. The next several minutes devolved into a discussion of the Democratic ticket’s true views on hydraulic fracturing.

At a time when parts of the country are still on fire and Americans suffer from increasingly severe storms, flooding, and hurricanes year after year, that’s an absurd dynamic—and it spells trouble for the coming legislative fights. Democrats will lose if we spend the first few months of 2021 doing press conferences to insist that we won’t raise gas prices or promising that the electric vehicle provisions of our climate bill won’t end gasoline-powered cars.

That’s especially true because we have such a compelling case. The Trump-Pence administration has handed out billions to the oil and gas industry and dismantled EPA regulations as more Americans every year die from hurricanes, wildfires, and flooding. Democrats, on the other hand, are starting to arrive at consensus in our vision: We need heavy investment in renewable energy that creates millions of good-paying union jobs—and brings fossil fuel workers along in the transition. It’s night and day, and according to study after study after study, that gap is a huge advantage for Democrats with enormous, planetary-scale consequences. We can’t allow Republicans to hijack this conversation, and force us to spend rare, precious minutes devoted to climate change in a national debate on whether or not Biden is really a fracker.

To be clear, this isn’t about one politician or one debate. The exchange matters because it’s indicative of a defensive crouch that Democrats have trapped ourselves in for years, and one from which we’re just starting to emerge. Gone are the days of 2008 and 2012, when President Obama avoided talking about climate change for as long as possible, convinced the issue was a losing one. The politics have shifted; now, it’s clear climate is a top issue not only for the Democratic base, but also one with the ability to persuade undecided and independent voters. Biden’s campaign understands this, which is why they’ve become the first presidential campaign in history to air a general election TV ad on climate change, and why Biden proactively did a major policy speech on the issue as wildfires were burning across the West Coast.

Still, if Democrats are serious about not just winning this election but next year’s legislative fight too, we need to shake off every bit of that historical crouch. We need to question old political truisms—is it really true that you can’t win Pennsylvania without being for fracking? Are voters really incapable of understanding that the cost of inaction is higher than the price tag of a climate bill? We have to embrace the fact that this is winning, fertile ground for us—and we have the bad guys over a barrel. Overwhelming majorities of Americans see it as a win-win to create millions of unionized jobs that build prosperity for all, while transitioning to the clean energy economy of the future. If we keep the focus of the climate debate there, we’ll prevent civilizational collapse. And we’ll probably win some elections, too.