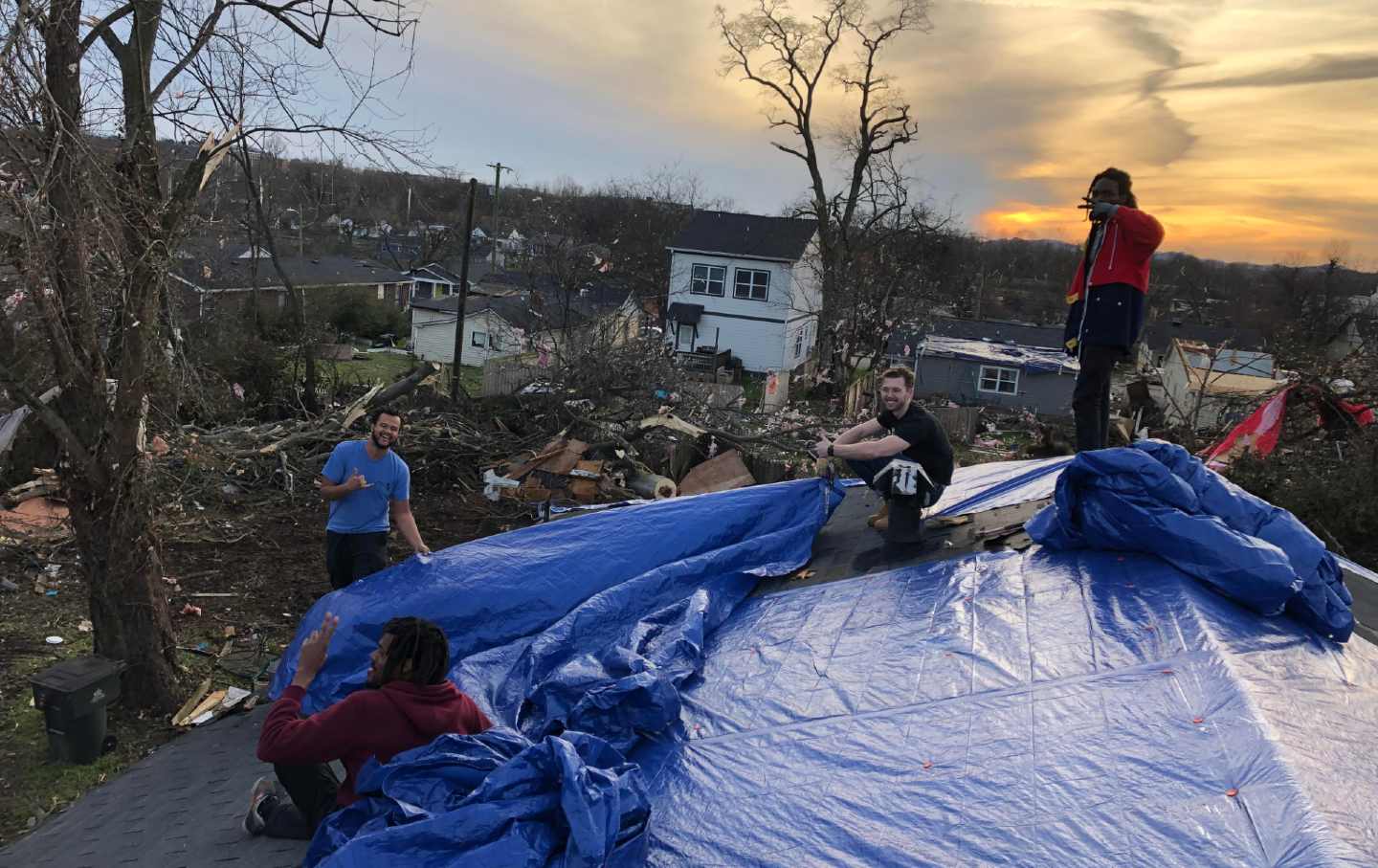 ashville—It rained all day yesterday. My neighbor down the street called to ask if I’d help him move some boxes once the rain stopped; his roof caved in during the tornado that hit weeks ago, and now the tarps had failed, dumping deep piles of loose, wet insulation throughout the house. All along the half-mile-wide scar that the tornado had left through North Nashville (and then for 60 continuous miles across three counties), yesterday’s rain trickled through puddling and straining tarps, echoing on the floors of abandoned homes and soaking into the mattresses and drywall of those still occupied. The mayor has issued a “safer at home” order requiring us to stay in to prevent the catastrophic spread of the coronavirus. “What home?” my neighbor grunted, as we lifted the boxes into my truck. The tornado scattered us, and the virus bottles us back in.

The night after the March 3 tornado, we mobilized, thousands of us, cutting apart the hundreds of mammoth hackberry trees whose roots had given way to the wind, crushing roofs and cars and knocking out every electric line in nine ZIP Codes. We rented or borrowed every chainsaw in the county, as the tireless young people from the Sunrise Movement set up a mutual aid hub across from the corner market. Neighbors pulled out ladders and hammers to tarp one another’s roofs; the racial justice crew Gideon’s Army mobilized volunteers to provide humanitarian supplies and clear roads. The same day that the governor announced the first confirmed Covid-19 case in Middle Tennessee, city officials opened up the downtown farmers’ market and neighborhood community centers as emergency shelters for hundreds of homeless families. Over the following days we didn’t talk much about the virus except as an explanation for why we couldn’t find gloves or masks for work crews starting to gut houses.

The tornado hit on Super Tuesday and I took a half hour out to vote for Bernie, but there was no line at the gymnasium that day. We didn’t get power back for eight days. Some homes are still without it. As temperatures dipped toward freezing, rumors spread that house flippers were prowling the block offering black homeowners cash for a fraction of their property’s worth. We made agreements with strangers on the street that if we caught house flippers, we’d slash their tires and run them out of the neighborhood. We gathered generators to keep peoples’ space heaters going; even now, you can hear generators running at night.

After the first grim days, the streets started filling with people, great floods of volunteers, now with pale skin and sunglasses and joking about “taking lumberjack selfies.” The crowd disappeared as the coronavirus moved into the headlines: Dozens were dead in Seattle; Italy’s medical system was overwhelmed; African nations were denying entrance to their northern neighbors. Now I walk through North Nashville and the streets are empty. The bartenders and housekeepers and restaurant workers who had brought the volunteers work gloves and hot meals in early March are home now, researching unemployment programs, trying to figure out how they’re going to make the rent. The city is bipolar; the Honky-Tonks on Second Avenue are closed by decree, but construction sites are still bustling. The house flippers managed to get some properties in North Nashville after all, and a friend who is organizing with construction day laborers agitates on Facebook: “Gentrification is NOT an essential industry.”

But none of us knows how to pivot between crises, and online agitation doesn’t feel like enough. When I do run into a neighbor, we talk about a citywide rent strike. He thinks it might just work; he stays on the sidewalk with his dog while I talk from the porch, 20 feet away. A friend from Brooklyn calls, concerned, knowing that I’ve been in the street for weeks. “The virus isn’t a tornado,” she says; “your neighbors don’t carry the tornado in their lungs.” But the tornado is still here, and the gentrifiers and the landlords aren’t taking a break. Church pews and family photos still litter the street on 21st and Formosa, fading in the rain as city workers set up the new Covid-19 treatment tents outside General Hospital a few blocks away. As I drive home at dusk after dropping off the last load of my neighbor’s boxes at a storage unit, the flashing blue-and-red marquee in front of the neighborhood church is the only visible activity. The words march past in three-foot-tall letters, announcing to no one at all that god is still in control. God or the virus or the tornado or the landlords, or all four, because it damn sure isn’t us yet.