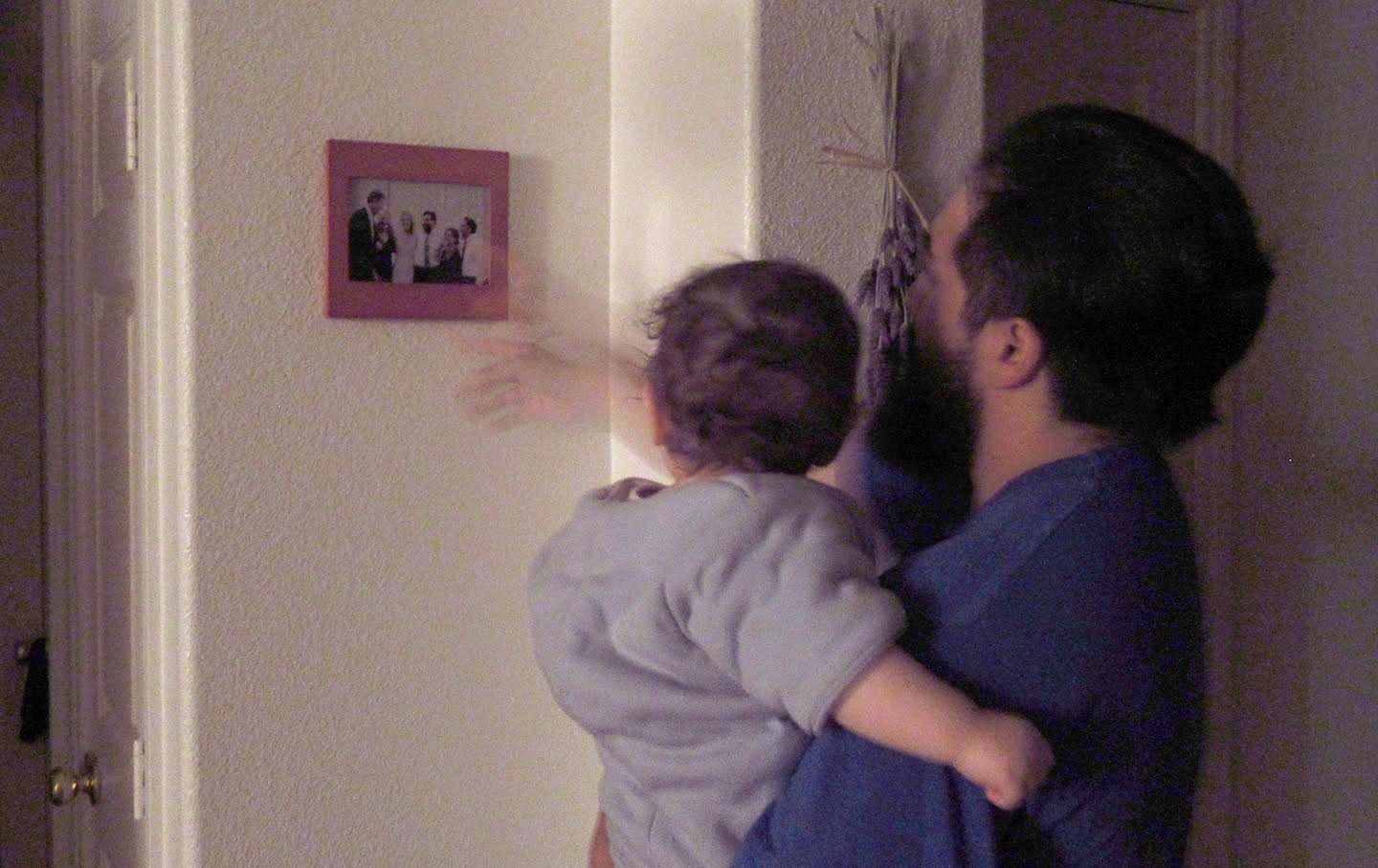 Joaquîn Orduña at night with his father, and a picture of his grandfather. (Photo: José Orduña)

as egas and hicago—My dad works at a grocery store in Chicago. He’s 57 years old. He was born in Acapulco, Guerrero. He likes to play the guitar for his 10-month-old grandson, Joaquín, and me, his 35-year-old son, over FaceTime. When my son smiles at the screen, it soothes the hurt caused by the 2,000 miles between us. My dad is quite fit, but he takes a pill every day to lower his blood pressure—a gift inscribed in his genes by his biological father, who abandoned him as a child. When the pandemic hit full stride, he and my mom began gaming out a series of bad “choices,” likely catastrophic “choices,” amid a moment of world-historic crisis that’s been 40-plus years in the making.

They’ve been trying to “figure things out,” he says. My mom works at a rehabilitation hospital as an interpreter, but her hours have been drastically reduced. My dad can’t work from home, and they’re “on his insurance.” Whenever we video chat, I can see that he’s scared but trying to look, for me, as if he’s not. When he showers, puts on his uniform, and goes to work, he’s forced to make a wager with fate: Today I won’t contract the virus. I won’t die alone, intubated, in an overburdened hospital. I’ll watch Joaquín grow into the toddler clothes I sent him on his 6-month birthday.

He does this for $14 an hour and the health insurance. The wager he makes every day is a version of one he’s been making his whole working life, which began before he was 10. When he left Mexico, during what historians now call the lost decade—an economic crisis fueled by unscrupulous lending by US commercial banks, World Bank– and IMF-imposed austerity, and the liberalization of the Mexican economy—he lost. He paid in the form of estrangement from everything and everyone he knew, but especially his mother, and the man who helped raise him, whom he called his father. He was able to see my grandmother only a handful of times before her death, and he never saw his dad again, not even when he was laid to rest.

When I was a toddler, and he worked 12-hour shifts as a dishwasher at a stadium, he lost again. This time, the price was the permanent disfigurement of his right hand, which was left with thickened, dead skin that comes off in scales. When I was in my 20s, he worked at an industrial food packaging facility about an hour’s commute from where we lived. He worked the night shift. My mother talked to him on the phone for the duration of his drive to make sure he didn’t fall asleep. His blood pressure was the worst it’s ever been then. When he came home at dawn, he looked dazed, like he was sedated or sick, and although it was never diagnosed, he sunk into a slow-burning depression that made him prone to bouts of anger and despair.

Something Is Happening Here

Silver Linings on a River

Food for Hard Times and Pleasure—Kimchee Out of Anything

With the pandemic raging, my father was “allowed” to take his two weeks of personal time. The other day he decided he’ll stay home without pay, and without the ability to collect unemployment benefits. For the time being, he’s “allowed” to keep his medical insurance, but he and my mother can’t absorb the cost of lost wages for long.

At night, when my wife and I are trying to get our baby to sleep, I take him on little walks through our darkened house. We call these whisper safaris, because I point to things with a dim headlamp and whisper stories to Joaquín as he swivels his head from the objects to my moving lips and back to the objects. One of our stops is a photograph of my father and me laughing and embracing at my wedding. Joaquín stares at the photo and then at me. I can see him working out that what he’s seeing is some version of me. He looks at his grandfather’s face and then turns to look at mine, and I imagine that he somehow knows the three of us contain one another, that we’re bound by more than blood. When I look at the photo I try to hide what I feel, but sometimes I can’t, and I see Joaquín sensing that something is terribly wrong. This pandemic has laid bare a system that is casual in its cruelty—one that would rather pay workers to die than pay them to live, one that absorbs certain kinds of people’s deaths in its cost-benefit analysis, one that would think nothing of making my son’s grandfather a memory he never had.