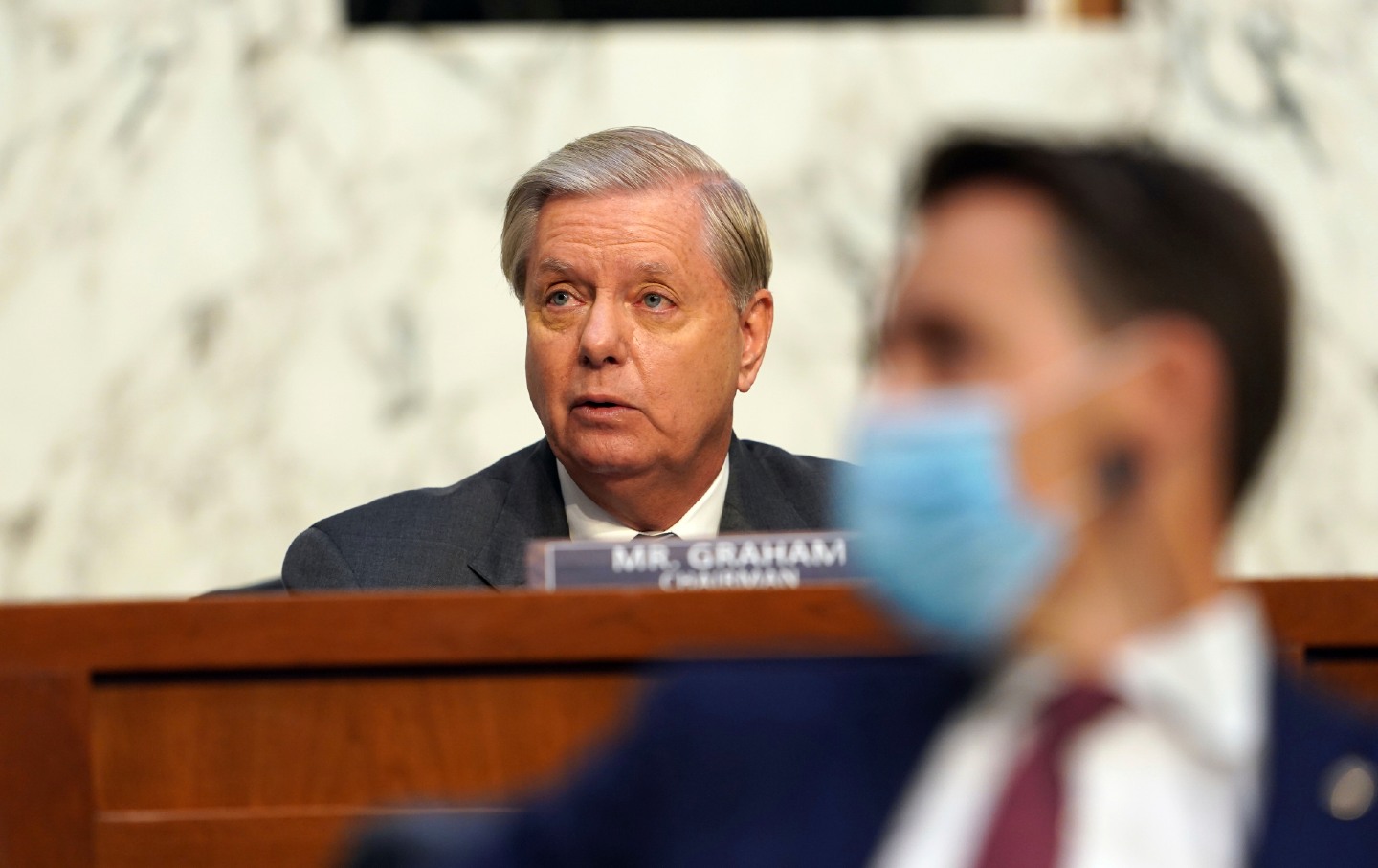 When Senate Judiciary Chair Lindsey Graham refused to take a Covid test last week, before a scheduled debate with surging Democratic challenger Jaime Harrison, his motives were obvious. The health of his Senate colleagues be damned: Graham wasn’t willing to risk a positive test that could delay Amy Coney Barrett’s Supreme Court confirmation, which begins Monday.

Sunday came word that Harrison raised a record-breaking $57 million in the third quarter. Since Graham has twice gone on Fox News and cried about his trouble fundraising—he raised only $8.4 million in the second quarter and had $15 million on hand as of June 30—this is terrible news. Meanwhile, Harrison is clobbering him when it comes to spending, according to Politico, having spent $52 million on TV and digital advertising this year versus $19 million for Graham—and from here to Election Day, Harrison has reserved more than $16 million, Graham $4.8 million. Shockingly, the race has been statistically tied since August, and reputable polling sites consider it a toss-up.

Which raises two questions: Is Graham just so sure a Black Democrat can’t be elected to the US Senate from South Carolina, and/or confident in a last-minute cash infusion from party leaders and his corporate backers, that he can afford to crater in fundraising and stay in Washington, D.C., until barely a week before Election Day? Or is Graham, exhausted by what it takes to sell his soul, almost daily, to a man he once mocked as a “kook,” “crazy” and “unfit for office,” finally giving up, and claiming Barrett as his final shot at a conservative legacy?

I’m at least beginning to wonder if it’s the latter. Republicans have South Carolina wired, so it’s too soon to declare Graham dead politically—though not spiritually.

Of course, Graham is risking not just his own health (and political career) but also that of his Senate colleagues—including Republicans—and staffers. Senate majority leader Mitch McConnell, who recently boasted that he hadn’t visited the White House since August because he was dismayed by its cavalier attitude toward Covid, could require all Judiciary Committee members to get tested—Republicans Thom Tillis and Mike Lee have already tested positive—but, of course, he hasn’t. On Sunday, a clip resurfaced of McConnell on Fox News, cackling like a caricature of Satan about his role in blocking so many of Barack Obama’s court nominees; he wants this confirmation as much as Graham. The Kentucky senator is unlikely to lose his race for reelection, but let’s hope he loses his position as Senate majority leader, in part because of his handling of this debacle.

GOP Judiciary Committee member Joni Ernst, who is trailing in her Iowa reelection race, said over the weekend that she believed all members should be tested before hearings begin. Ernst could jeopardize the committee’s vote on Barrett if she boycotted the hearings to back up her very appropriate demand. But the motorcycle-riding Iowa farmer who once boasted of castrating hogs won’t stand up to her leadership, apparently, even if she loses her Senate seat.

Meanwhile, media bigwigs continue to harp on Joe Biden’s refusal to answer questions about whether he’s willing to expand the Supreme Court—what journalists and Republicans call “court packing”—until after the election. “The only court packing going on right now is going on with Republicans,” Biden told reporters on Saturday. Biden doesn’t need to answer a hypothetical, when the answer depends on so many variables, including the Democrats’ ability to take the Senate.

So it looks like the confirmation hearings will begin as planned. But I wouldn’t count on them ending as predicted. Barrett currently has the votes to be confirmed, on the committee and on the Senate floor. Still, if Senate GOP leaders’ risking public health (oh, and their own integrity, having denied Obama nominee Merrick Garland a hearing in 2016) shifts public opinion—or if, God forbid, Barrett’s nomination occasions yet another GOP elite super-spreader event—you might see some Senate Republicans, especially vulnerable incumbents, find their long-lost spines. I’m not counting on it, but I’m not ruling it out, either.