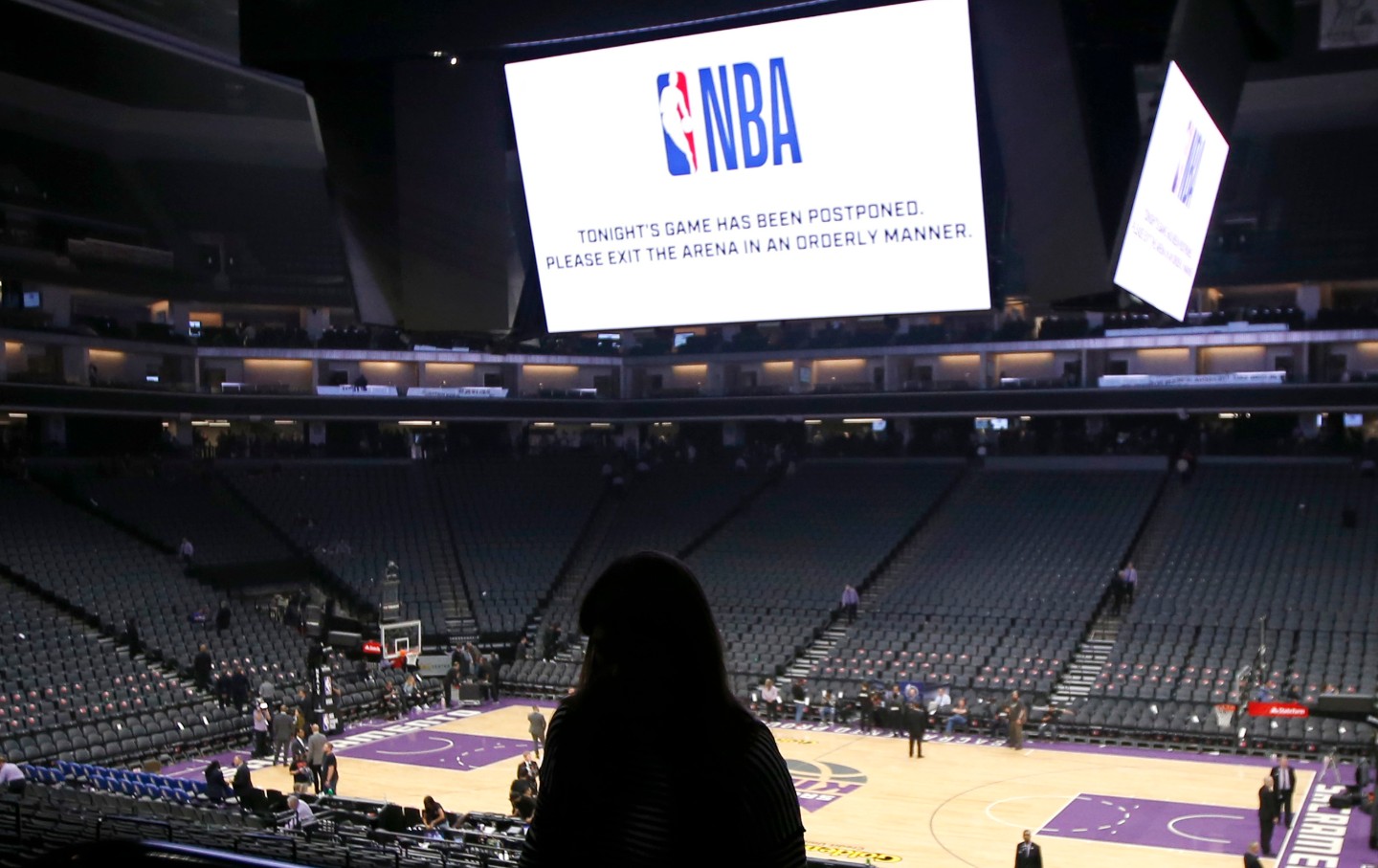 Fan leave the Golden 1 Center after an NBA game in Sacramento, California was postponed as a precaution against the coronavirus on March 11, 2020. (Rich Pedroncelli / AP)

The National Basketball Association has acted with a speed that is putting other sports leagues, the NCAA, and particularly the federal government to shame. In the course of a single day, March 11—a day we will perhaps remember as the turning point when people began taking the coronavirus seriously—the NBA moved from planning to wait out the virus, only asking players to fist bump instead of high-fiving the fans, to calling for games to be played in empty arenas, to finally putting the entire season on hiatus.

The NBA made this unprecedented decision after Utah Jazz All-Star center Rudy Gobert tested positive for the virus. Earlier this week, in an act that will go down in history as a symbol of our own hubris, Gobert touched every microphone in the press room—mocking the very idea that there was a communicable virus in our midst. After his diagnosis, the Jazz game in Oklahoma City against the Thunder was canceled right before tip-off, with confused fans milling about the concourses and both teams quarantined back in their locker rooms. If there was one scene that speaks to how quickly we’ve gone from blasé to terrified, it was seeing Chris Paul, the All-Star point guard for the Thunder and a respected union leader, come over to the Jazz bench to see what the hell was going on and be waved away fiercely as if he was about to walk through hell in a gasoline suit.

The NBA had to make this decision, for the players’ safety as much as the public’s. Few professions involve more travel and interaction with literally millions of people than professional basketball. The league could have become a COVID-19 roadshow, infecting populations in city after city. Commissioner Adam Silver had no choice but to pull the plug.

The collateral damage will be stark. It’s not merely about the integrity of the 2019–20 season. That seems pretty irrelevant at the moment. The bigger concern is the pain this will cause communities, particularly the thousands of low-wage workers who labor in NBA arenas. For many families, one paycheck away from calamity, this loss of income is catastrophic. Only one NBA owner thus far, Mark Cuban of the Dallas Mavericks, has stepped forward and said that he is developing a plan for employees of the team and the arena, saying, “I reached out…to find out what it would cost to financially support people who aren’t going to be able to come to work.”

The 29 other billionaires who own these teams, for public relations reasons alone, need to step up and tell the public how they are going to help the workers, particularly the low-wage workers who make arenas run, through this difficult time. Bob Myers, the president of the Golden State Warriors, did say, “We feel for the workers, mostly, the low-wage earners that count on working our games.” But workers need more than their sympathy. They need paid leave.

And even paid leave won’t help the people who sell bootleg goods outside the arenas, making their living through the underground, informal economy that surrounds sporting events around the world. I spoke to one of those workers last night, who said to me, “I don’t know what I’m going to do. I need that money. Without it, my family is in hella trouble. And if we get sick, I don’t even know.”

We also need more NBA players’ using their platform to speak out during this difficult time. Monty Williams, coach of the Phoenix Suns, said earlier this week, “I heard the test costs like $1,400. Who can pay for that other than folks who have excess money? People are dying. That test should be free.”

That is step one. NBA players now affected by this could make a tremendous difference by spreading public awareness.

For now, given first the death of Kobe and Gianna Bryant and now the hiatus of the season, I think many fans echo the words of LeBron James, who tweeted, “Man we cancelling sporting events, school, office work, etc etc. What we really need to cancel is 2020!”