Farmworkers brought to the United States in the H-2A visa program harvest melons in fields that can reach 110 degrees many days. (David Bacon)

an oaquin alley, alif.—In November of 2020, Roberto arrived in California’s San Joaquin Valley to pick oranges, tangerines, and lemons for Porterville Citrus, a large grower. He’d been hired in Veracruz, Mexico, by a recruiter for Fresh Harvest, a labor contractor who brings workers to the United States every year under the H-2A temporary visa program.

“We were being paid by the hour, but they put production quotas on us and continually demanded more,” he said in an interview in May. “They said we’d be fired and put on a blacklist if we didn’t meet the quota. In the oranges, we had to fill a bin every hour. If there was a lot of fruit in the trees, we had to fill it every 45 minutes, or even every half hour.”

Roberto’s experience is not unique. Last year, in the middle of the pandemic, the US Department of Labor gave certifications to California growers allowing them to bring in about 25,000 H-2A workers. This year many of those workers are laboring in the extreme heat wave in the San Joaquin Valley, where temperatures rise to over 110 degrees by early afternoon. 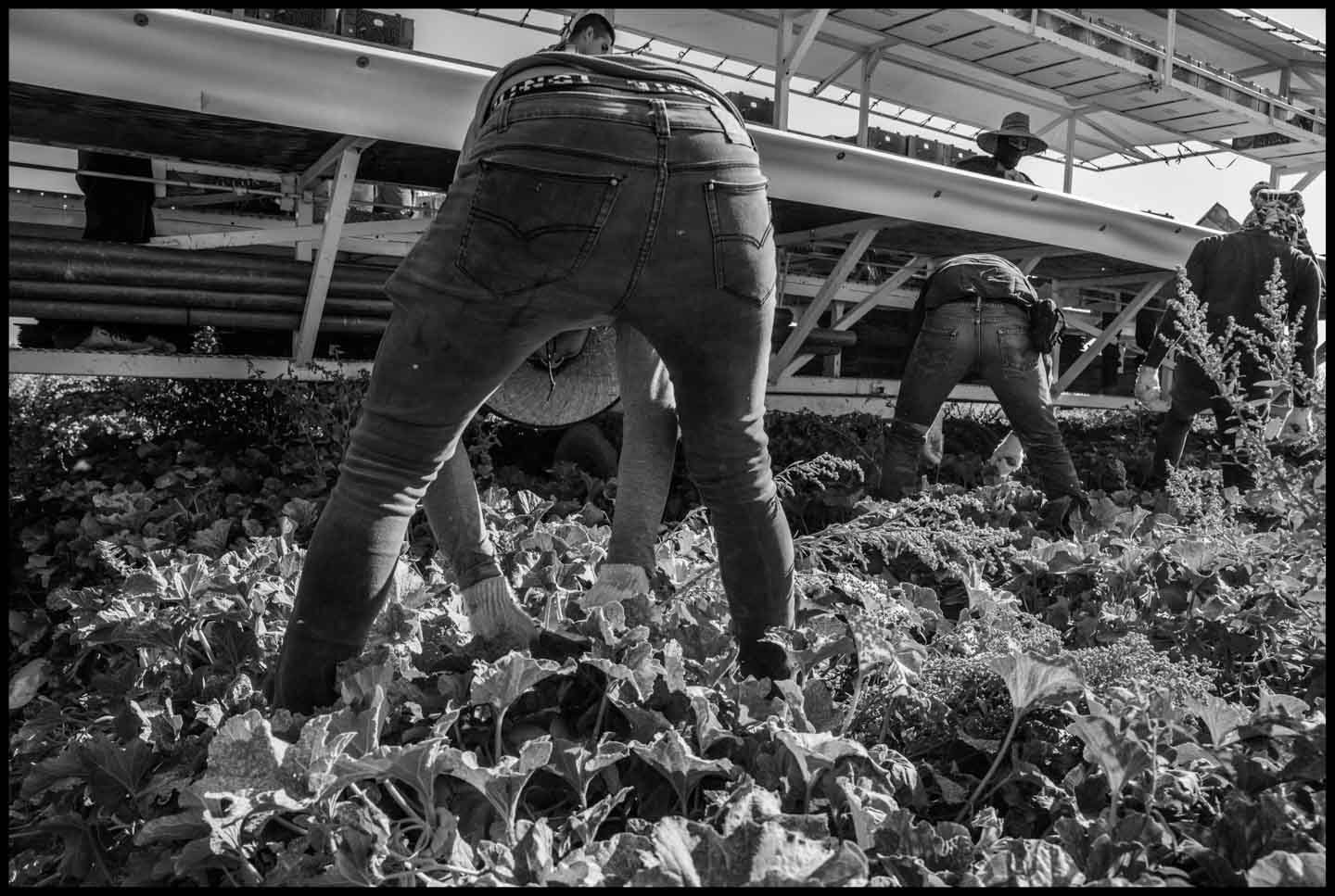 Farmworkers brought to the US in the H-2A visa program harvest melons early in the morning in a field near Huron, in the San Joaquin Valley. They cut the melons from the vines, and toss them onto a conveyor belt that leads to a platform where other workers pack the melons into boxes. This system replaces the earlier system, in which workers tossed, caught and packed melons with their hands, which was easier on the fruit than a more mechanized process. (David Bacon) 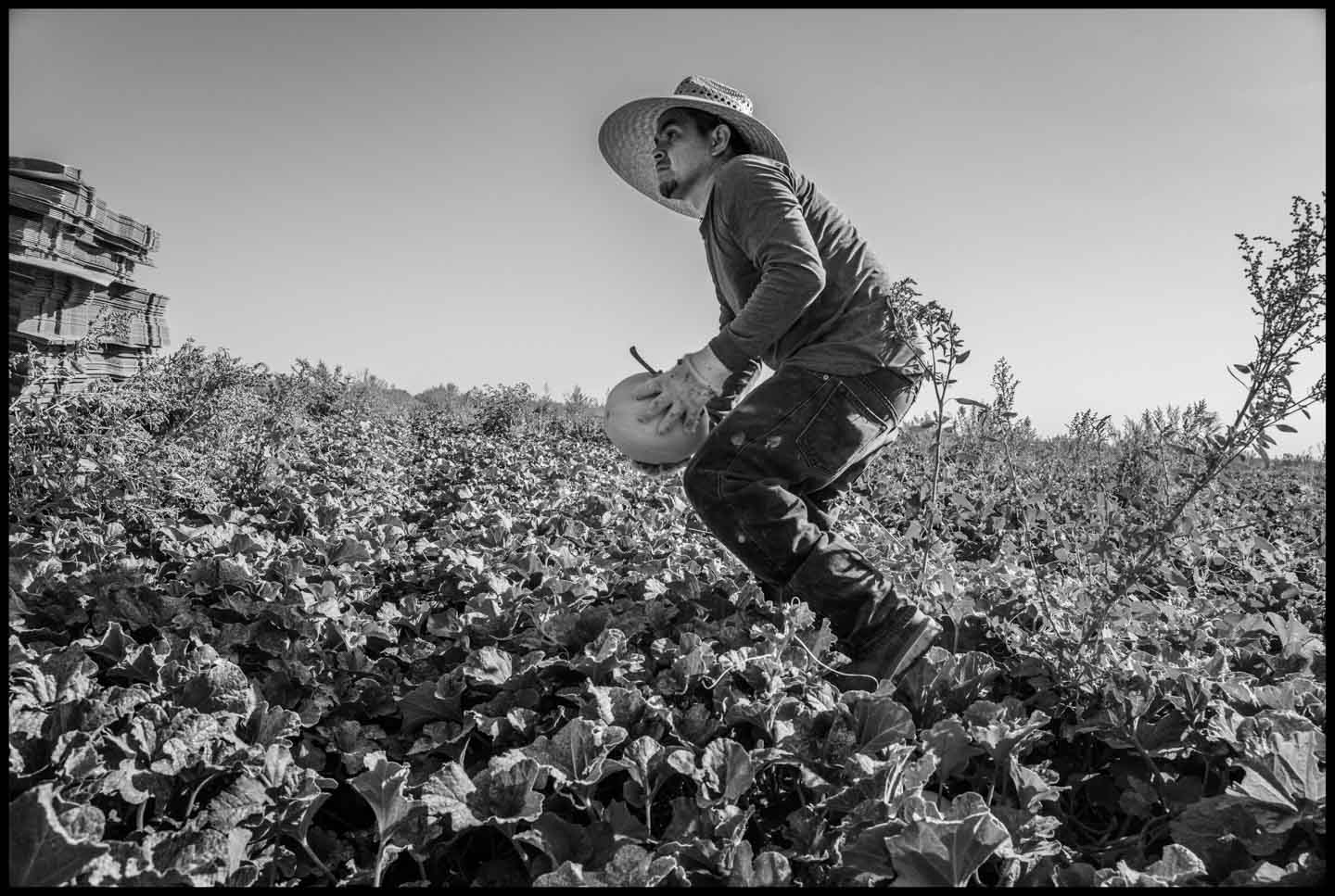 These H-2A workers have been brought to California by Rancho Nuevo Harvesting, which contracts crews of H-2A workers to growers throughout California. This field belongs to the Fisher family, which contracts with Rancho Nuevo to harvest it. Fisher uses a mechanized harvester, called a “Melonator” for 10 percent of their melon crop. The rest is picked by local workers or those employed by H-2A contractors. (David Bacon) 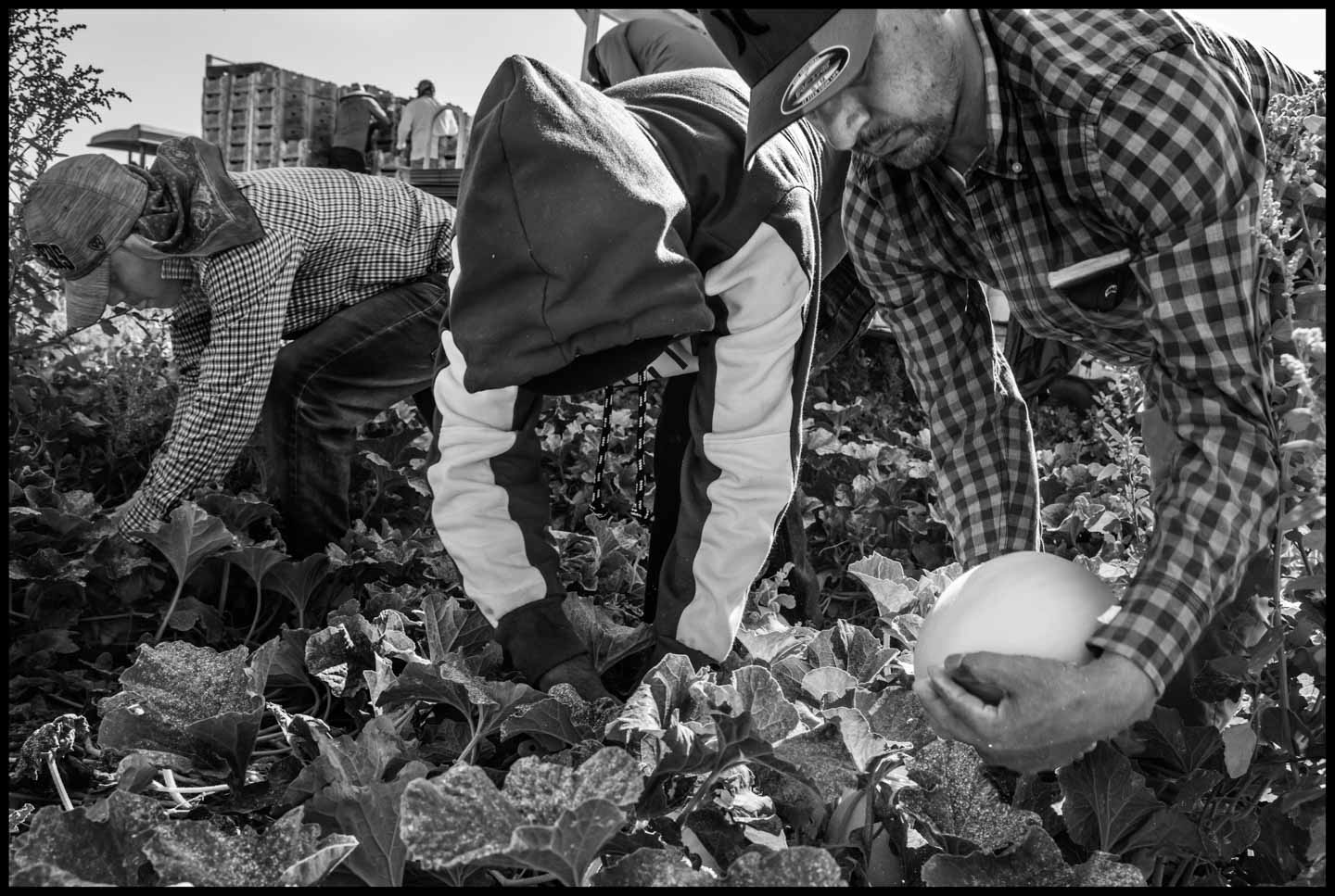 The temperature at the time of this photo, about 9 in the morning, was over 95 degrees, and would reach over 110 in the afternoon. Workers said they would put in eight hours, which would have had them stop at 1:30. (David Bacon) 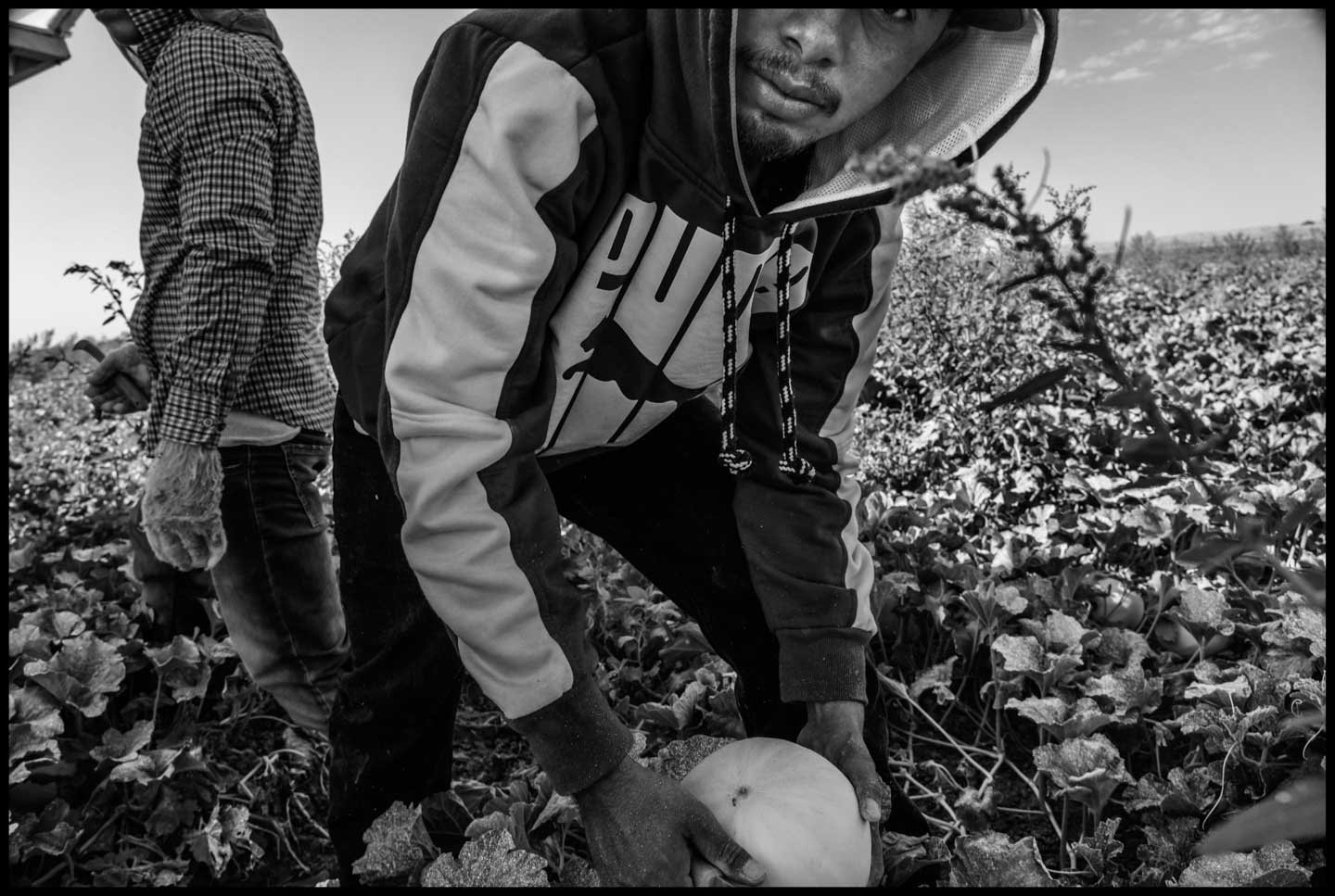 The workers in the two crews in the Fisher field are Cora indigenous people, recruited from the Mexican state of Nayarit. These photographs were taken on their second day of work in the US and they were not yet accustomed to the heat. The Cora live in a mountainous region where the climate is cool, and often even cold. According to a man cutting melons next to the machine, one worker began to bleed from his nose the day before, on his first day working in the heat. (David Bacon) 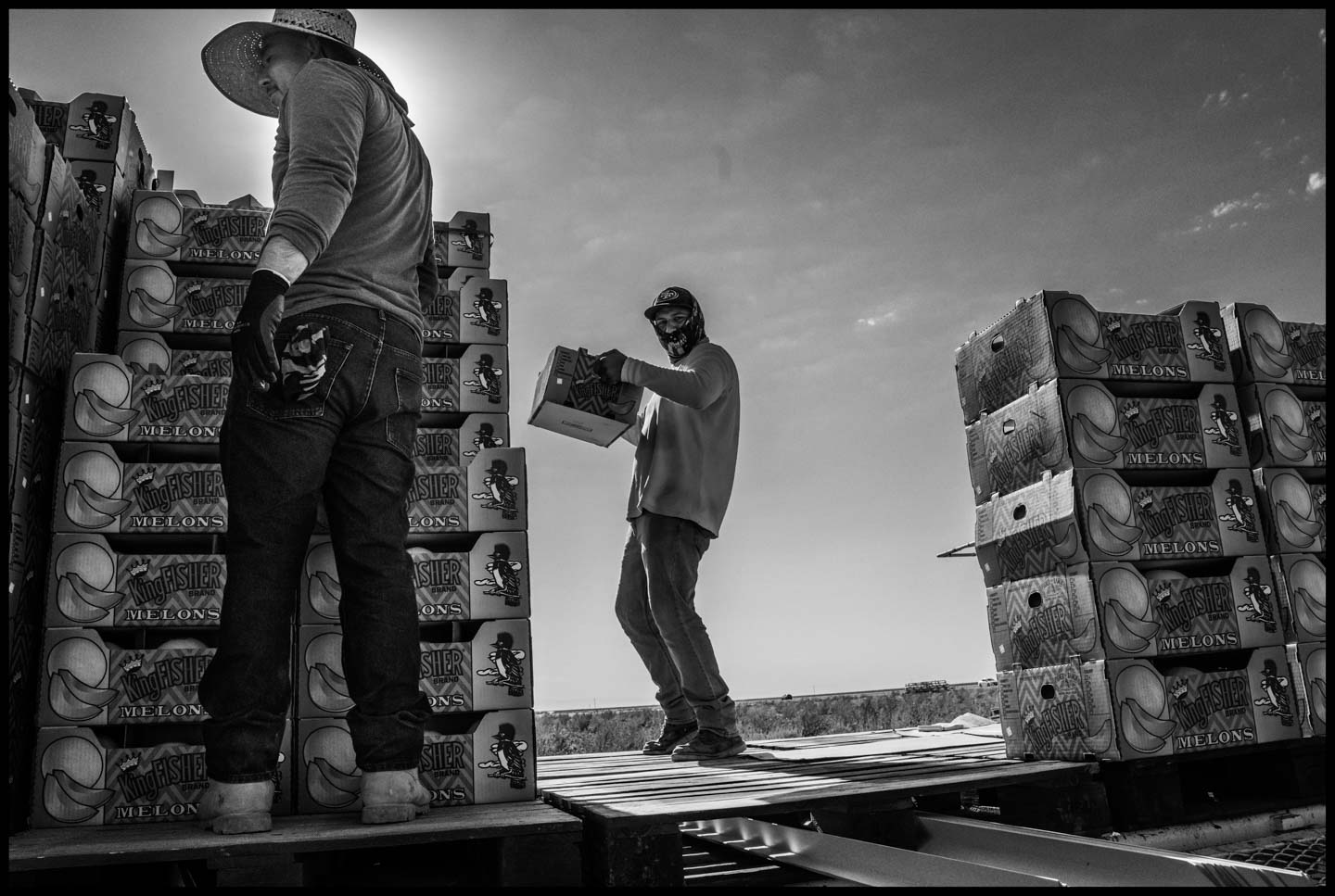 People keep working in the heat, motivated by fear and economic necessity. “We all come from marginalized communities in Mexico where there’s no work,” Roberto explained. “It’s easy for the company to take advantage of our need.” In his crew of 45 pickers, eight were fired in six months for not meeting the quota. “It was completely exhausting,” he said. “The food the company gave us wasn’t enough, and we were tired all the time.”

Like most of the H-2A workers I’ve interviewed, Roberto asked me not to use his real name. “All the people I work with are afraid of reprisals if we speak up. We can be fired at any time. The company tells us we can’t come back the next year if we don’t do what they want.” 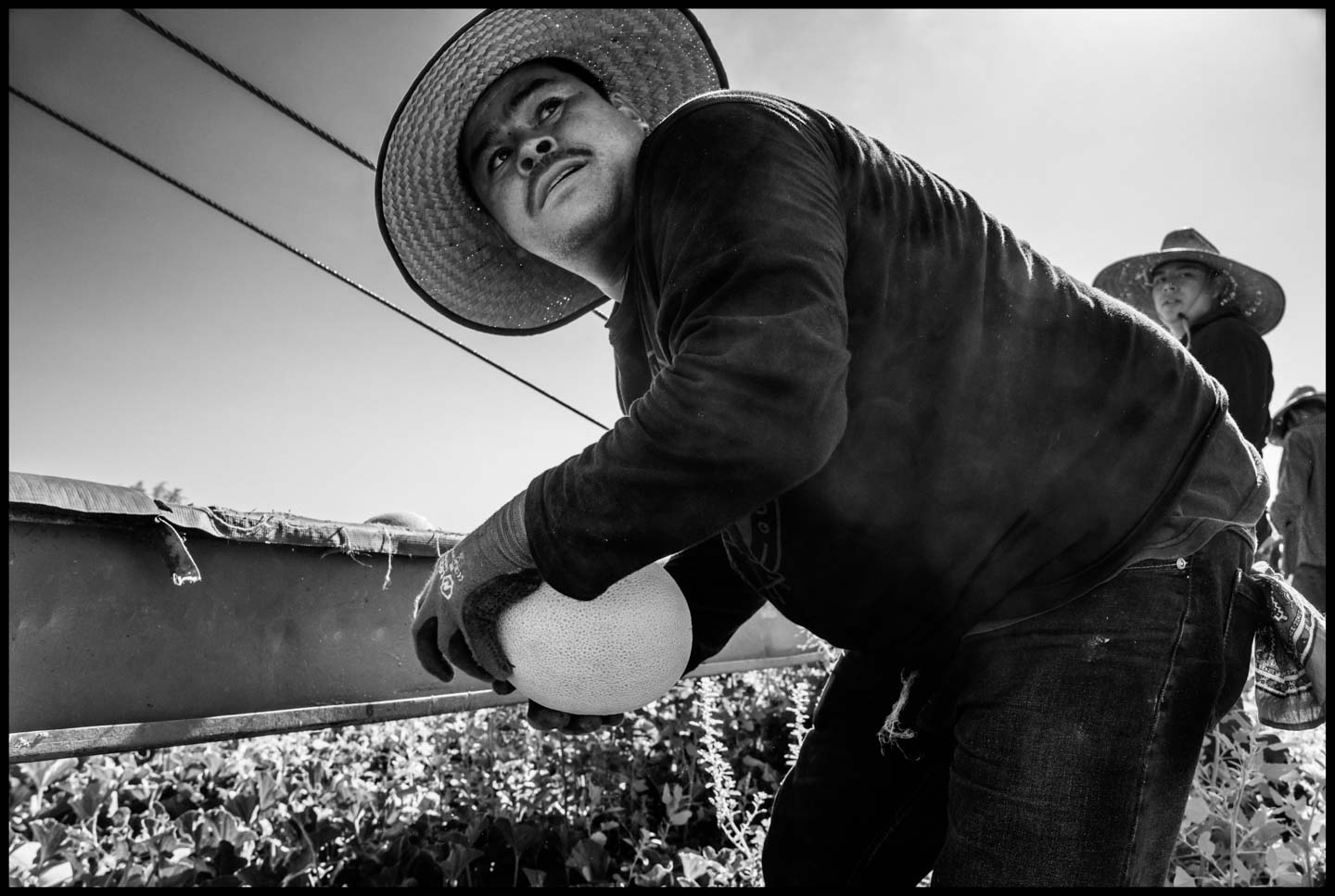 Grower Bart Fisher has claimed that a shortage of farmworkers is driving up labor costs. His costs are also increasing, he says, because California legislation, fought for by the United Farm Workers, now requires that growers pay overtime after 40 hours. “We’re marching toward an 8-hour workday and $15 an hour. It’s just going to make us noncompetitive,” he told the Desert Sun. (David Bacon) 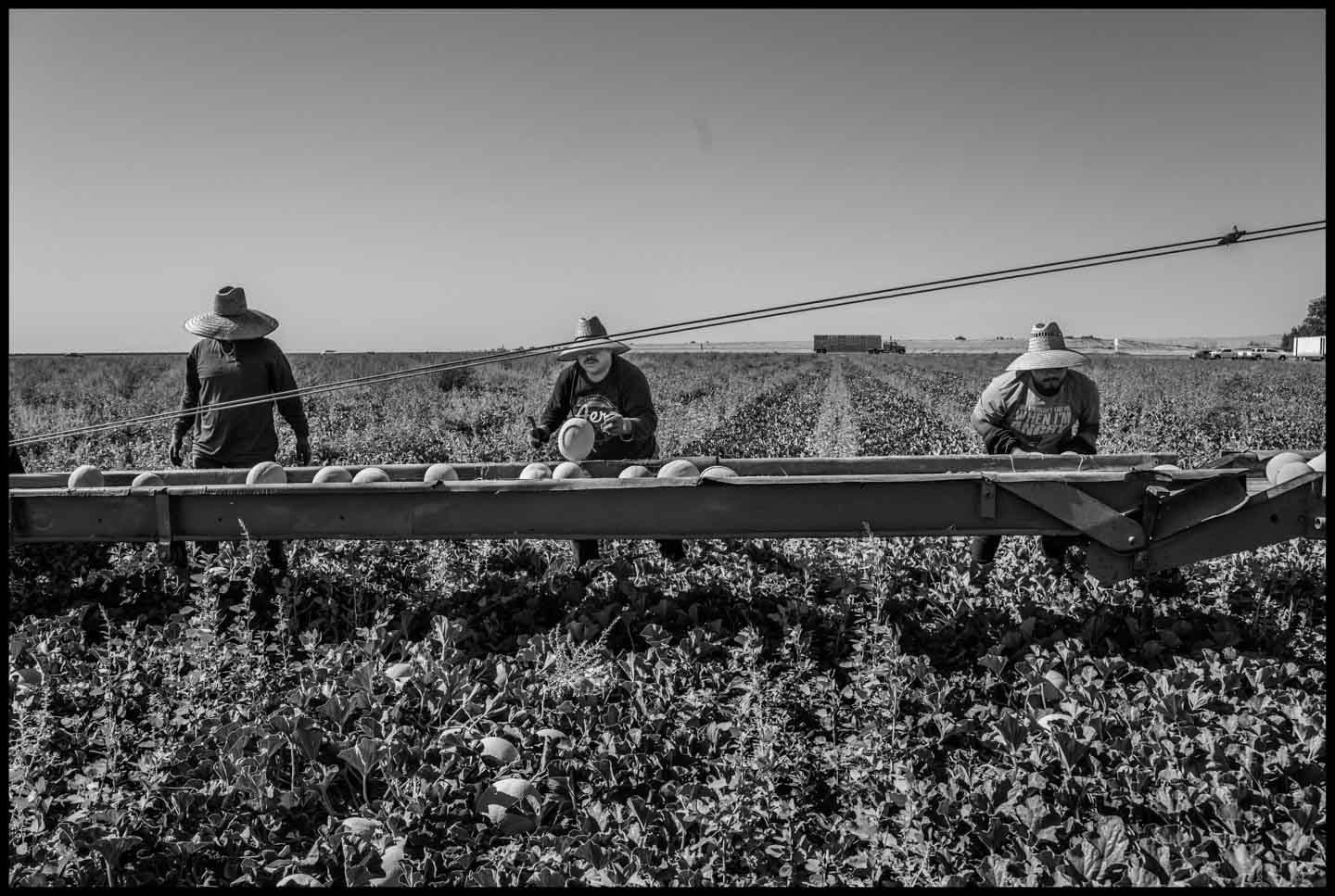 The conveyor belt and the loader assembly are parts of a mechanized system, the “Melonator,” intended to supplant much of hand labor in melon harvesting. Grower Bart Fisher says that when an additional assembly is added to replace the pickers themselves, the machine only needs seven people to do a job that now requires the 30 people in the H-2A crew. (David Bacon) 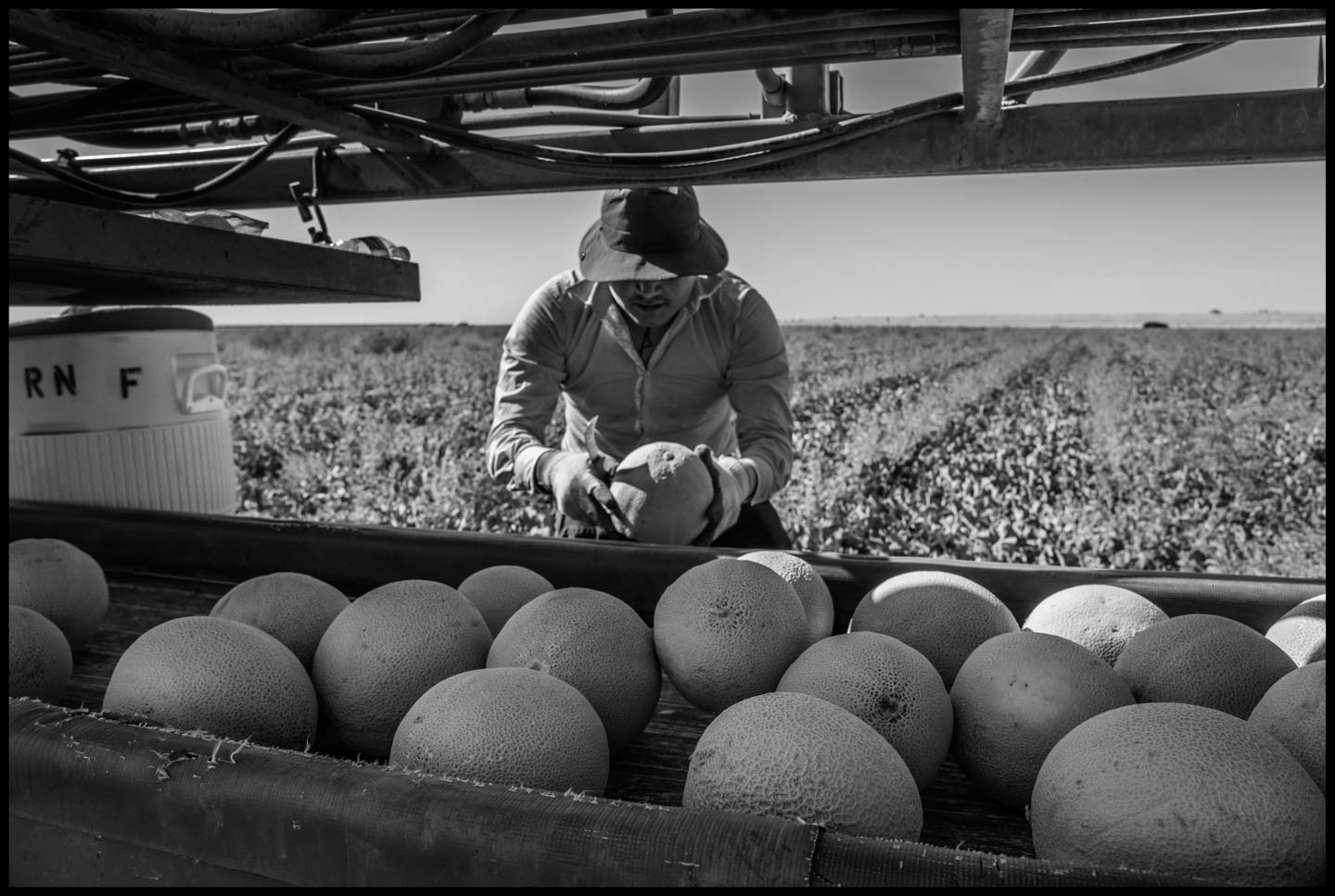 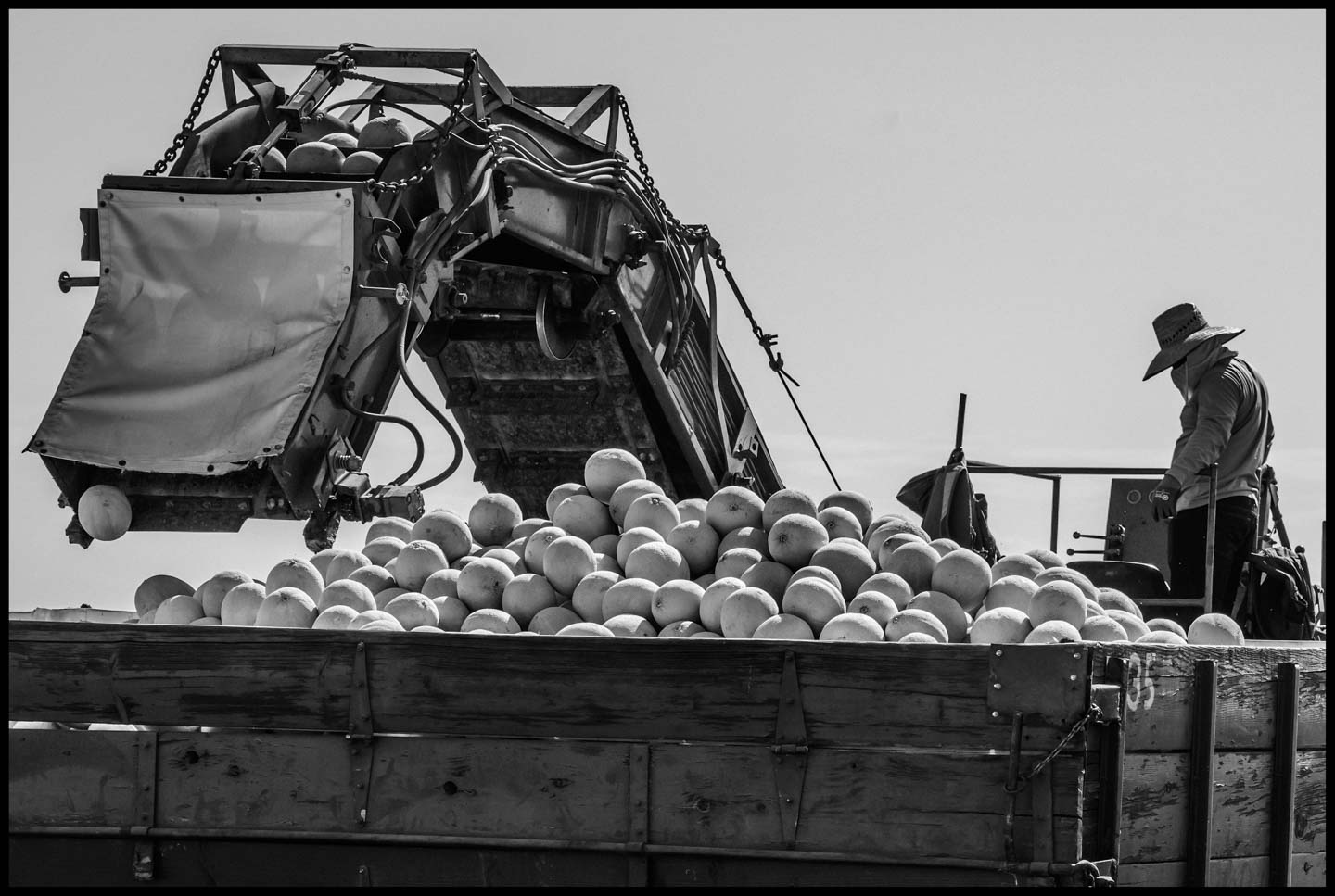 As the machine moves through the field, at the end of the conveyor belt the melons are loaded into a large hopper on a trailer dragged by a tractor. (David Bacon)

Roberto was housed, along with several hundred other H-2A workers, at the Palm Tree Inn, a rundown motel by the freeway in Porterville. “Some of us were living three to four people in one room,” he said, “and there are rooms with as many as eight or 10. In the van or bus going to and from work we’re crowded like sardines. During the pandemic we’ve been very worried about it.”

On May 28, he and over two dozen other workers stood in the motel’s parking lot, demanding to meet with the contractor who’d hired them. Their work contracts and visas had expired, and they feared returning to Mexico without their final paychecks. “It wasn’t the first time they didn’t pay us on time,” Roberto charged. After local activists and even a Porterville city councilman and the mayor of nearby Delano joined them, the company handed out their paychecks and most headed home. 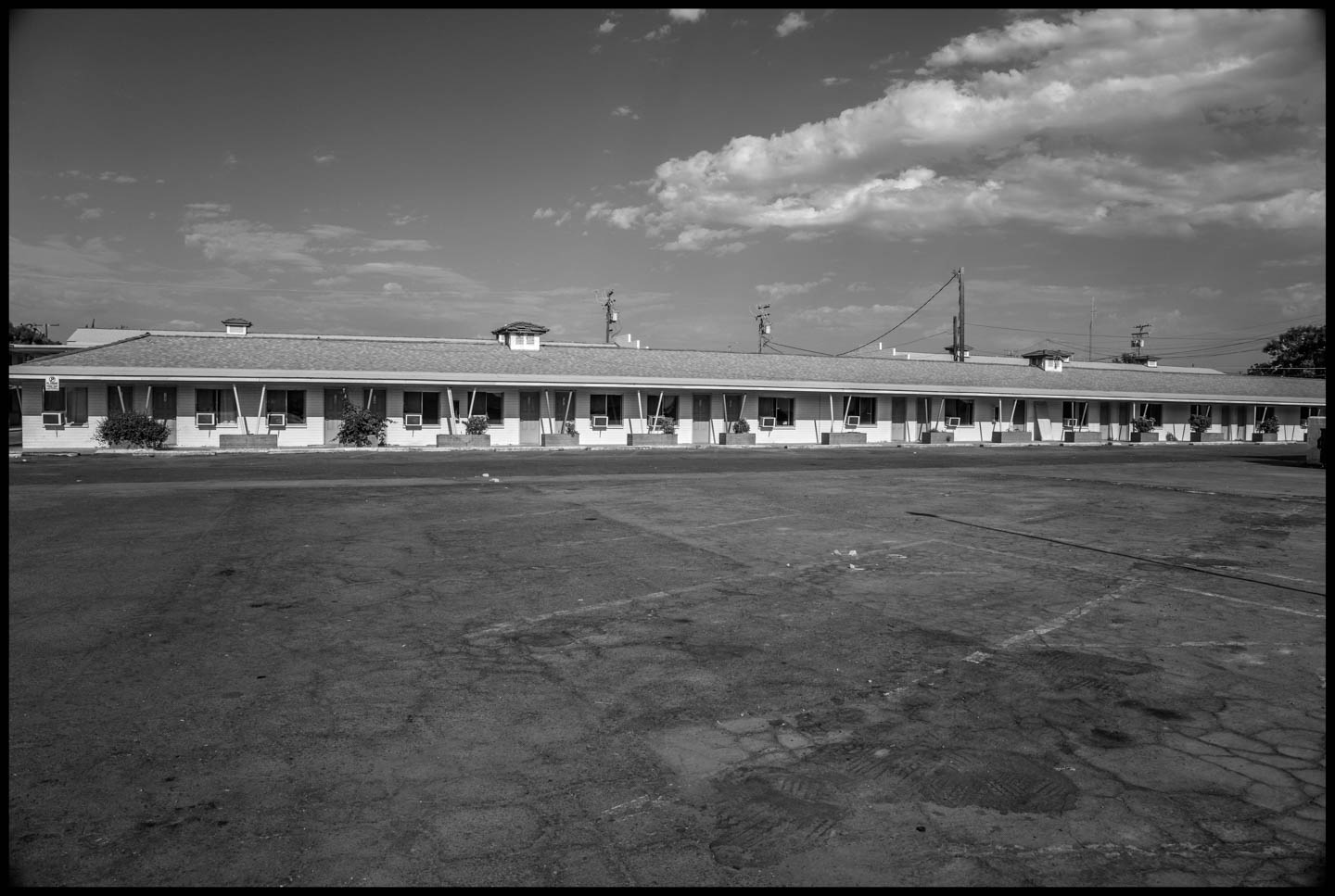 “We were kept in the Palm Tree Inn,” said Roberto, “which is in very bad condition.” The H-2A farmworkers working for Porterville Citrus were housed by the labor contractor Fresh Harvest at that motel in Porterville. 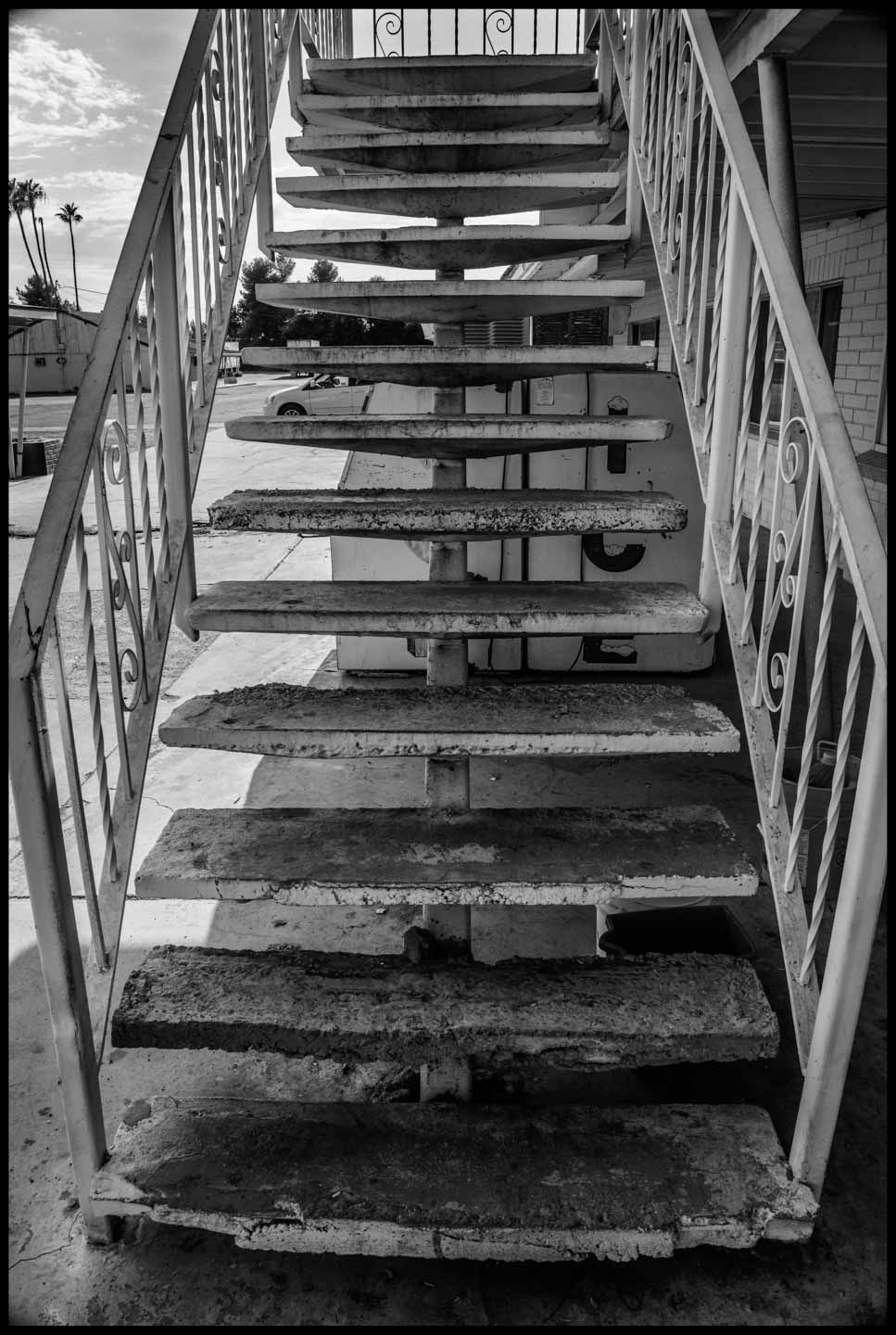 The Palm Tree Inn is an old motel. It received terrible reviews on websites like Yelp until Fresh Harvest took over its rooms to house its H-2A crews. After the controversy over unpaid wages, and the expiration of the contracts for the last workers, the motel appeared vacant. There are many other rundown motels like it across the San Joaquin Valley, however, and they are quickly being taken over as housing by H-2A contractors. 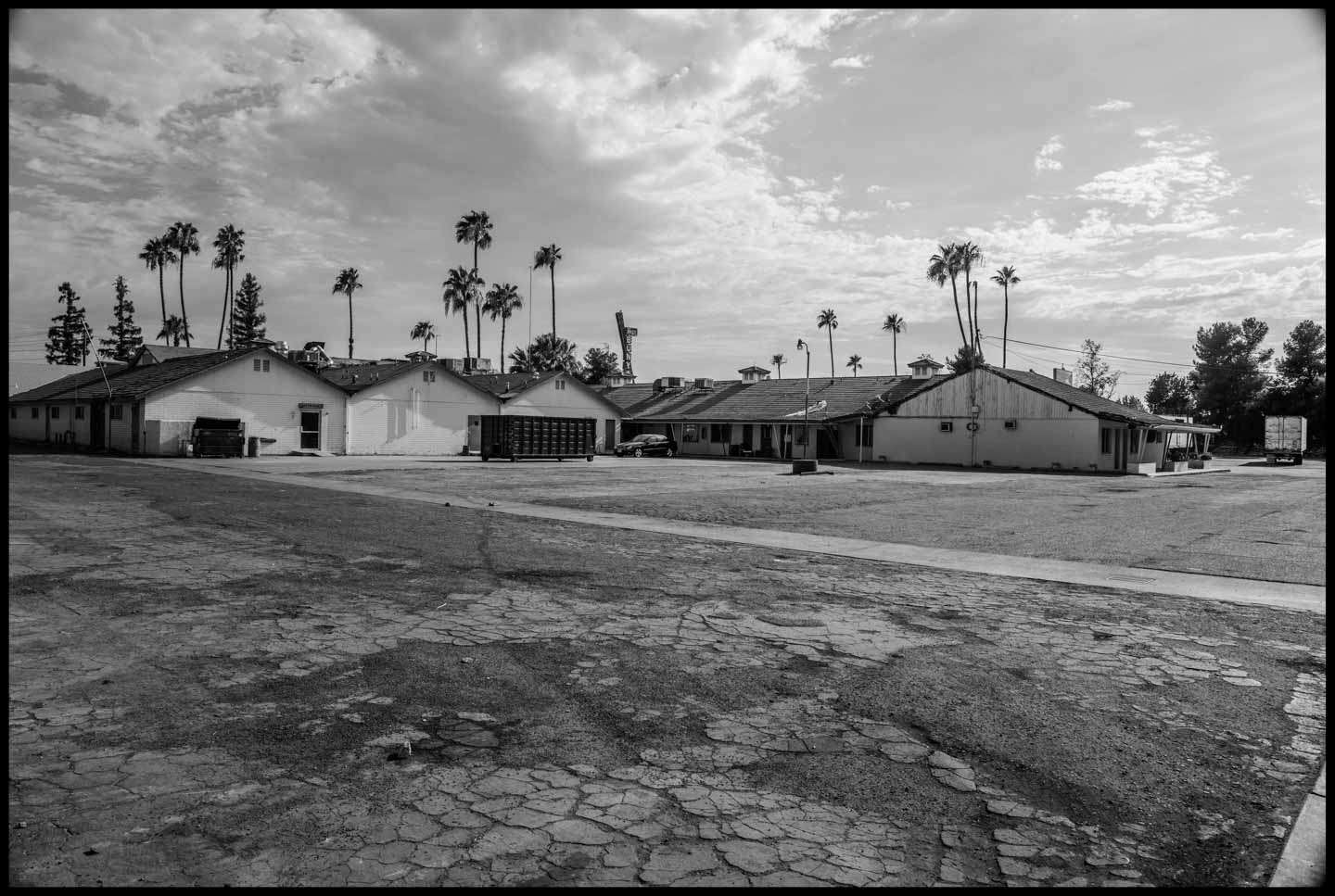 According to Mari Perez and Art Rodriguez, organizers for the Central Valley Empowerment Alliance, when they went to the Palm Tree Inn to talk with workers, Fresh Harvest guards threw them off the property. Other farmworker advocacy organizations also charge that labor contractors refuse public access to motel residences for H-2A workers. 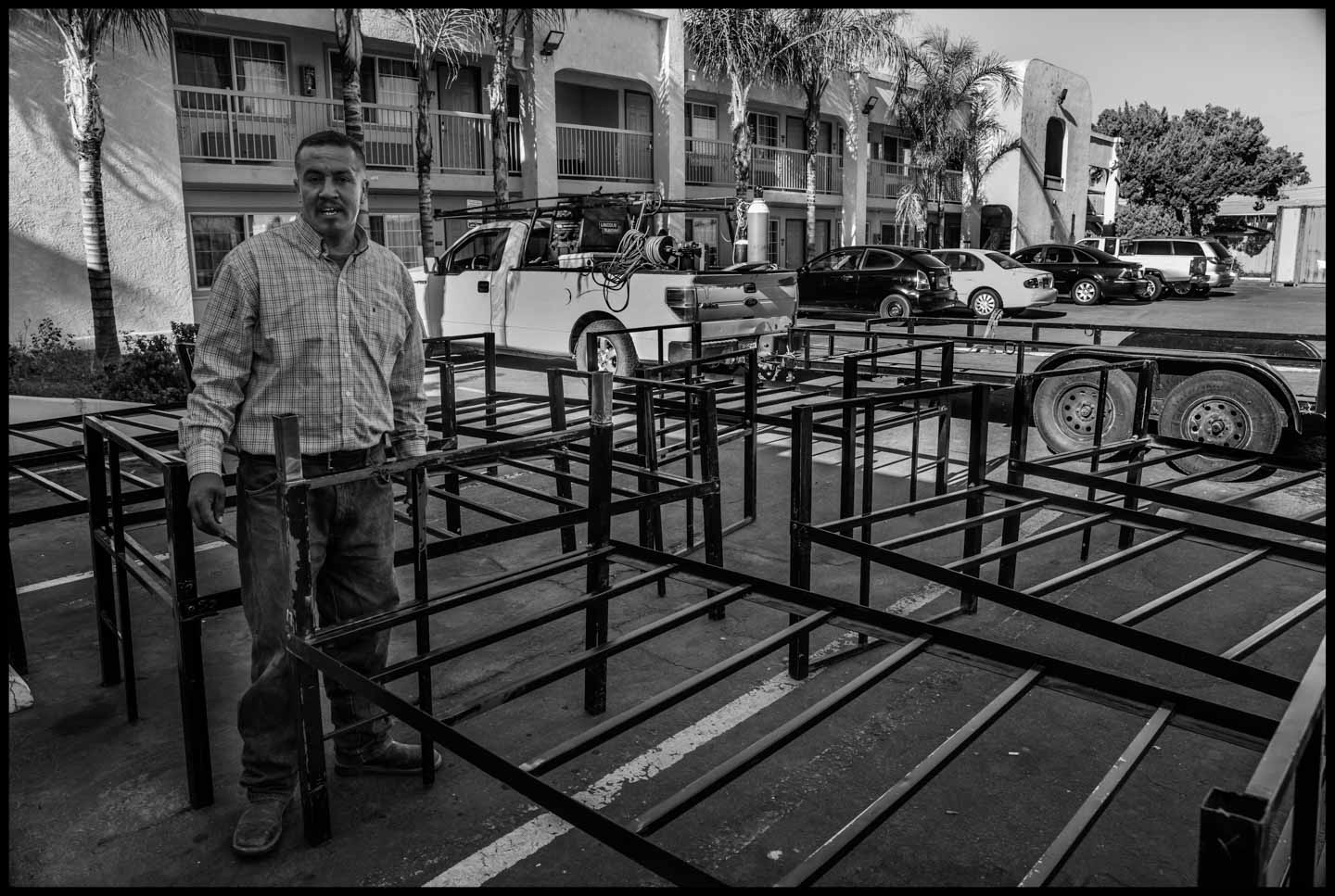 Farmworkers brought to the US in the H-2A visa program are housed by the labor contractor Jim Hernandez at the Travelodge Motel in Los Banos, in the San Joaquin Valley. Jose Diaz Solano is a welder, originally from Jalisco, who is welding bunk bed frames so that the contractor can increase the number of workers sleeping in each motel room from three to four. (David Bacon) 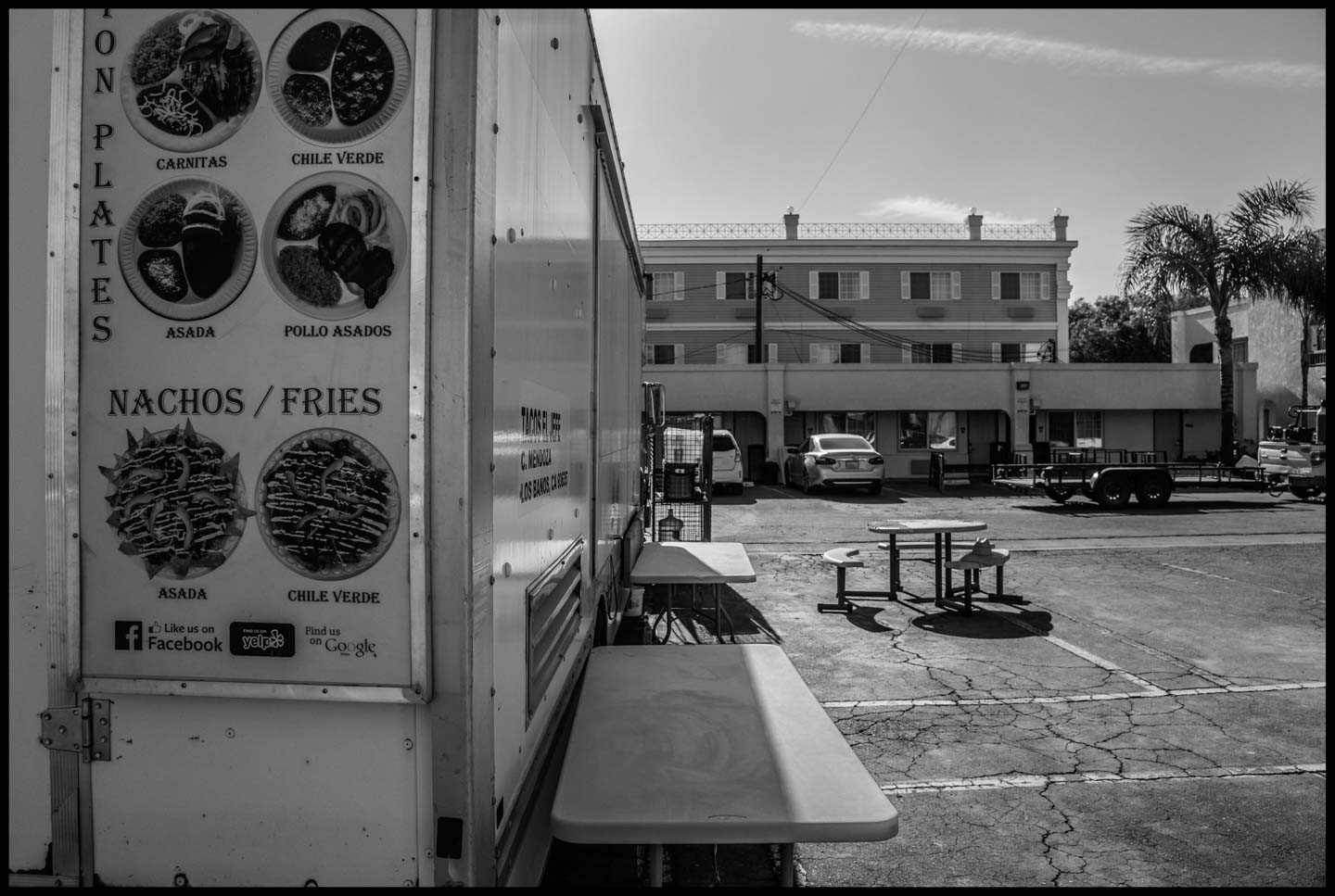 The H-2A workers at the Travelodge Motel get their meals at the taco truck in the motel parking lot. (David Bacon)

The farmworkers in the Fisher melon field, brought to the US in the H-2A visa program by the labor contractor Rancho Nuevo Harvesting, are housed at the Encino Motel in Huron. 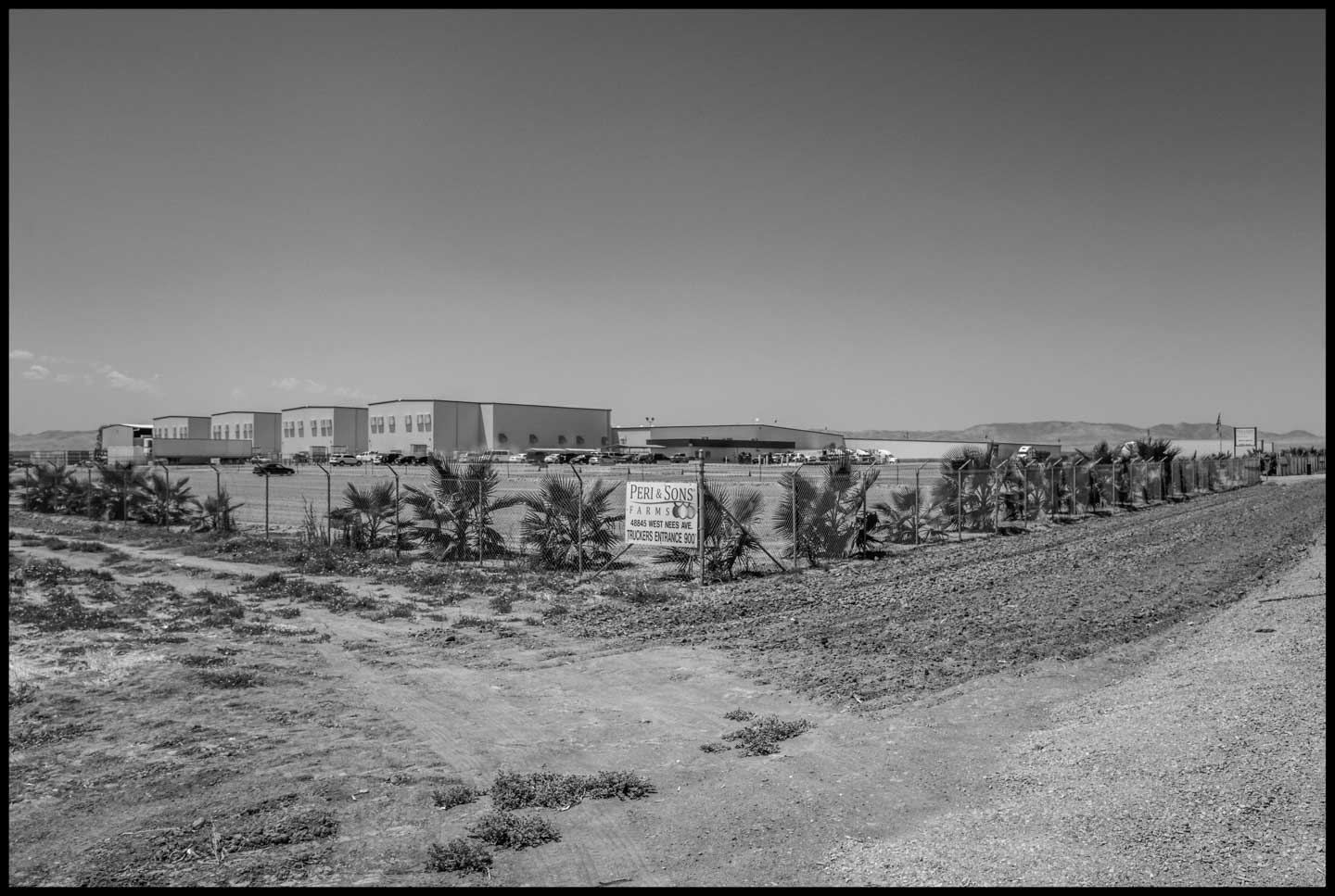 Some H-2A farmworkers are housed by growers on their own property. Peri and Sons, a large grower, has built barracks on its remote ranch near Firebaugh, in the San Joaquin Valley.

The photographs in this series are an effort to show visually the reality Roberto described. Some show the work process of two other crews of H-2A workers, hired by a different contractor. Others show the Palm Tree Inn and other motels where they live. Since the number of workers brought to California by growers increases by thousands every year, we need a better understanding of their true situation. Roberto’s story and the photographs are a part of that picture. 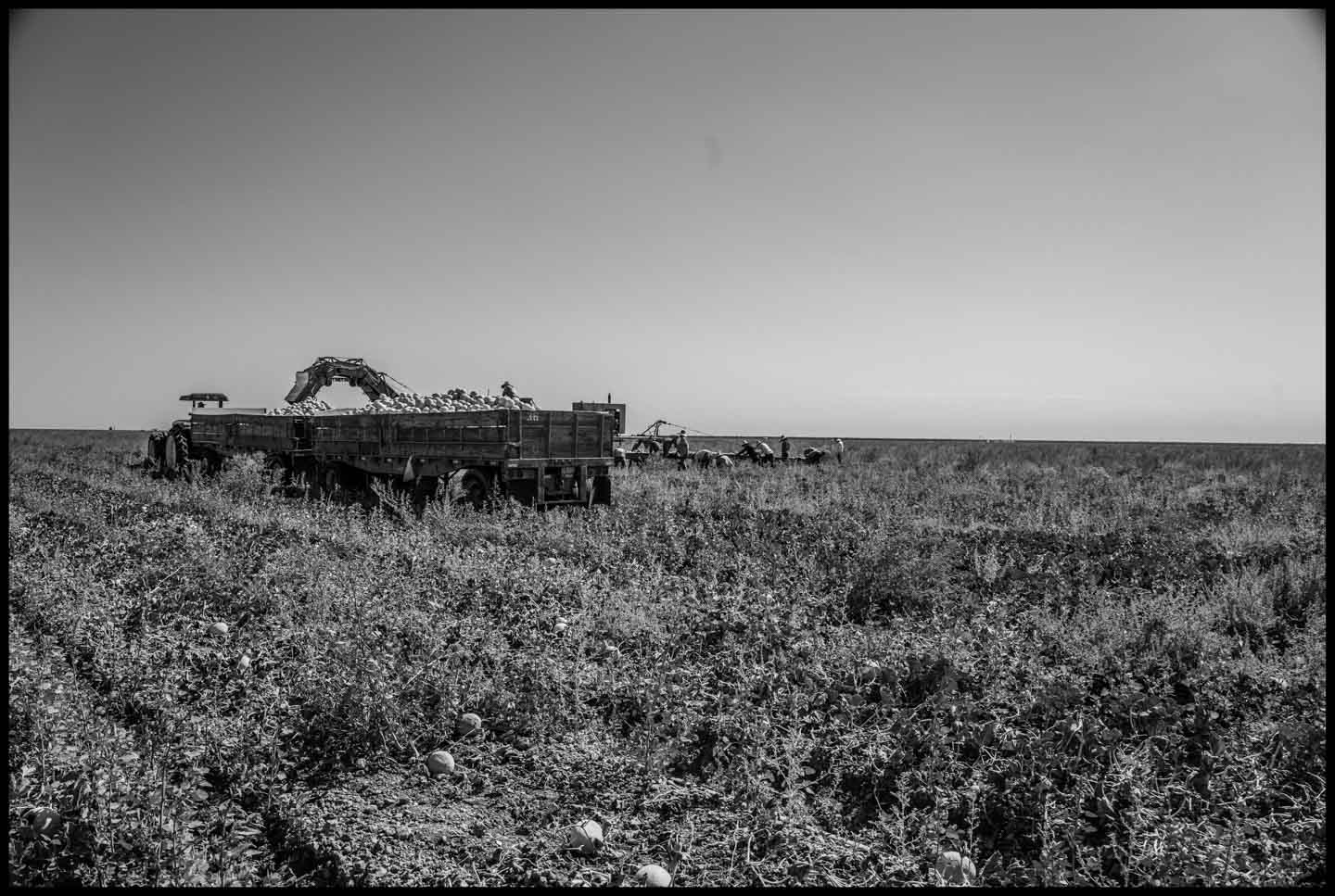